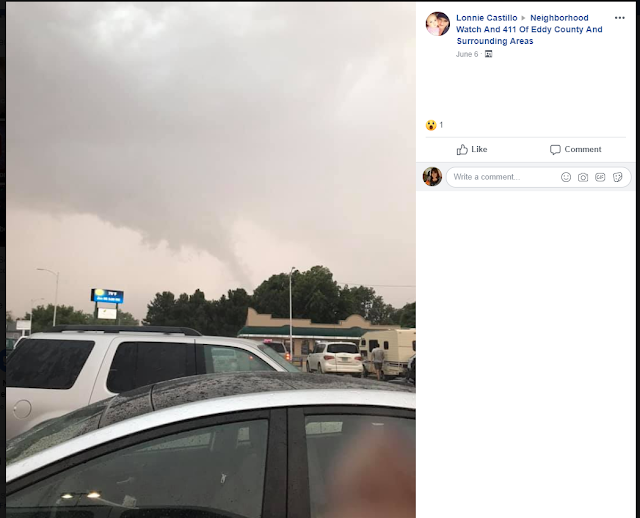 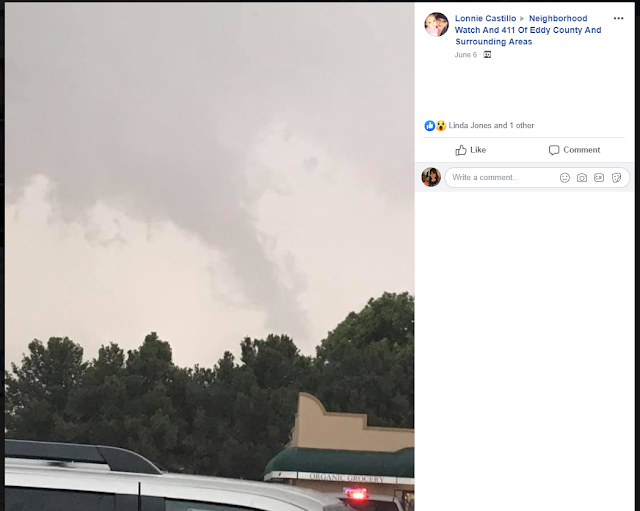 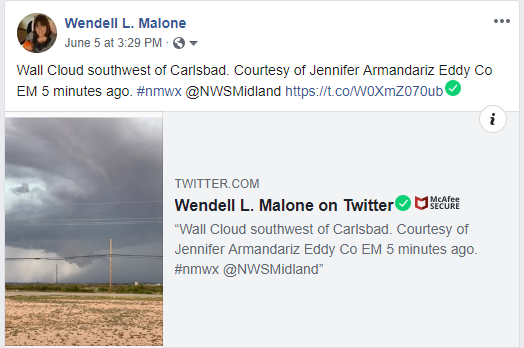 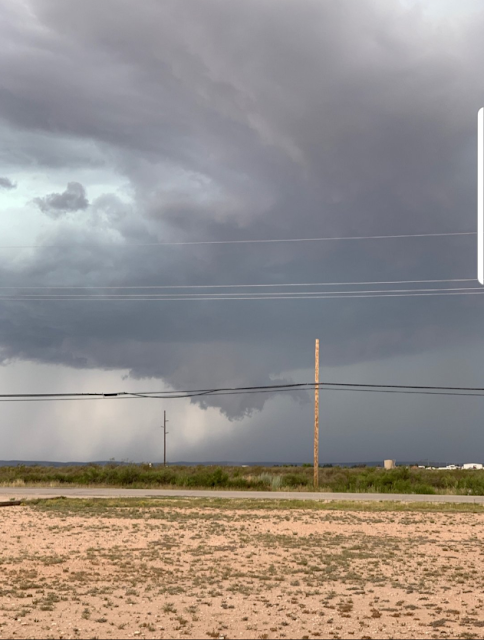 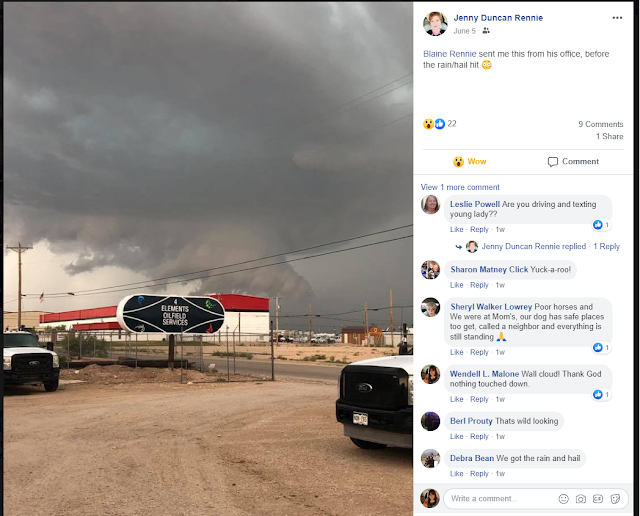 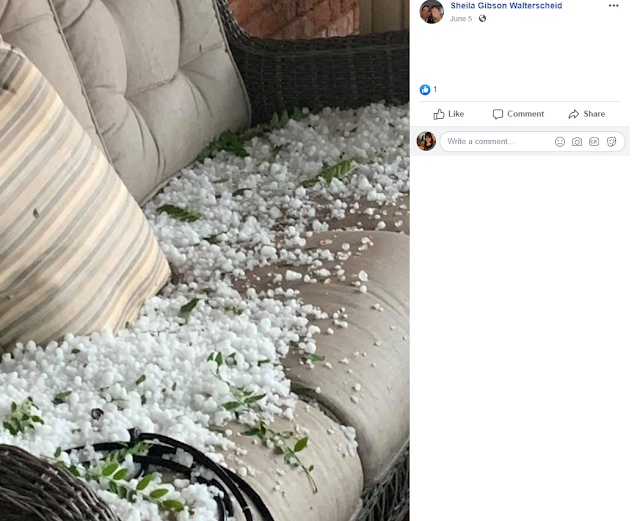 On Wednesday, June 5th, 2019 a Severe Thunderstorm rolled across southern Carlsbad. Quarter size hail (1" in diameter) was reported in Carlsbad at 3:34 PM MDT. Lonnie Castillo shared the two top photos of a funnel cloud over Carlsbad. She stated on her Facebook post that she was in the Albertsons parking lot when she took the photos. She is looking south. I do not have an exact time when she took the photos. Some of these photos were retrieved from my Twitter page (KE5WLM).

Eddy County Emergency Manager Jenn Armandariz sent me a photo of a wall cloud via private messenger (which I uploaded and shared on my Twitter page). The time on my post is 3:29 PM MDT. I do not have the exact time that she took the photo although my messenger shows that I received it at 3:26 PM MDT.

Jenny Duncan Rennie posted on Facebook a photo that her husband sent her of a wall cloud. The time it was posted shows 3:46 PM MDT.

As I stated on my blog post dated June 14th concerning the Hope tornado that occurred on Tuesday, June 4th, 2019 I was in Pittsburgh, Pennsylvania from June 2nd through June 14th. Both of these photos show a well developed wall cloud. Wall clouds need special attention since that is where tornadoes are produced. Rotating wall clouds that are persistent need to be watched carefully and reported.

Lonnie's photos look legitimate and as she stated the funnel cloud developed rapidly and dissipated just as rapidly. Was the wall cloud rotating which from looking at the photos was near the Carlsbad Airport. I don't know since I wasn't here to observe it nor have I found anything on Social Media to indicate that it was.

Severe thunderstorms (this storm had a Severe Thunderstorm Warning on it) can and sometimes do produce tornadoes with little or no advanced warning. This storm appears to have produced at least one funnel cloud that rapidly formed and just as rapidly dissipated.

What Is My Intention In Posting This?

It is not my intent to throw anyone under the bus or point fingers and play the blame game. My intent is to point out that in my humble opinion that more attention, better reporting, and coordination needs to take place between the Eddy County Skywarn Storm Spotters, our Local Law Enforcement Agencies, and the Midland National Weather Service Office. And I would hope that those storm chasers who chase in Eddy County would also give the Midland National Weather Service Office a call or file a spotter report on what they are seeing when chasing here.There is nothing wrong with improving what is already in place in order to better serve and protect our local communities. This needs to be a joint coordinated effort by everyone involved. 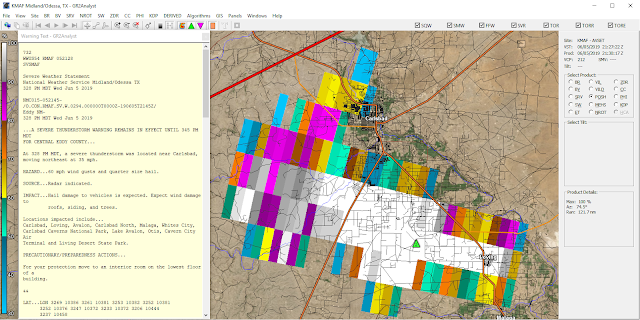 The area shaded in white indicates where the radar was that there was a 100% chance of severe hail occurring...or hail the size of quarters or larger. 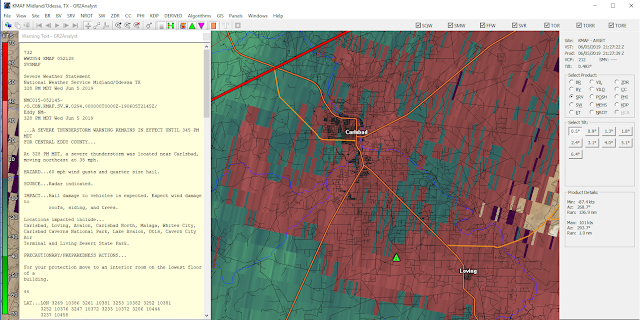 My Thoughts And Opinions.

I used AllisonHouse Wayback radar data to post the radar snapshots of the storm above. Using the snapshots above I have to agree with Pat Vesper the Meteorologist In Charge of the Midland National Weather Service Office which has forecast and warning responsibility for Eddy County that there was nothing in the storm relative velocity data to support or indicate that this Severe Thunderstorm was capable of producing a tornado...thus no Tornado Warning was issued by the Midland Office.

Pat and I had a conservation about this storm via email while I was in Pittsburgh. He noted that radar only showed a maximum of 20 knots inbound and 10 knots of outbound winds at the lowest tilt of the Midland radar at just above 13,500'. Looking at my images above I agree with his statement.

Pat also stated that his office did not receive one call about the funnel clouds over Carlsbad. Not from any of the Eddy County Skywarn Spotters or our Local Law Enforcement Officials. Again I was a long way from home so I can't say what did or did not happen. The last thing I want to do is try and play the role of arm chair quarterbacking in criticizing the warnings that our local National Weather Service Offices put out. Their goal is to saves lives through early prompt and accurate warnings. In order to do this they need help principally from our local spotters and Law Enforcement Community. Radar alone is not going to allow them to do their jobs in a reasonable responsible manner.

However, I remain deeply troubled about this event. Both at the time I received the photos above, and I remain so today. In defense of the Midland National Weather Service Office they had no radar data to support a Tornado Warning...and more importantly according to Pat Vesper no ground truth Skywarn Spotter reports or Eddy County Law Enforcement reports about the wall cloud or the funnel cloud.

Over time since I resigned as the volunteer Eddy County Skywarn Coordinator and the Regional Skywarn Coordinator all of the Midland National Weather Service County Warning Area I have noticed locally that there are less and less spotter reports of severe weather coming out of Eddy County. I base this on the Storm Reports I see coming from the Storm Prediction Centers Storm Report Page.

I had hoped that with my leaving as Coordinator that group that Joel Arnwine, the Midland National Weather Service Office, and I had worked so hard to create and maintain would not fall by the wayside. From my viewpoint it appears that this happened. This troubles me.

Radar cannot see tornadoes especially in our area. What it sees is the rotation within a thunderstorm. Radar measures the speed of winds that are moving towards and away from the radar and uses this data to determine the strength of rotation within a thunderstorm. So without radar data to indicate the presence strong or even moderate rotation there isn't a warning. Carlsbad is 108 miles away from the Midland radar and at that distance the radar isn't seeing any returns below about 13,000'. Even if we had a radar in our backyard it still would not see tornadoes. That's not how they work.

This is why its so important to have an active Skywarn Spotter Program in our communities. This is a volunteer program so you can't force people to volunteer or join. Over the years past our Law Enforcement community in Eddy County has participated in the Skywarn Program. What that level of participation is now I don't have a clue since I am not involved with them in this program anymore.

During the past two weeks there has been off and on a lot of storm chasers actively chasing in Southeastern New Mexico. Based on the number of chasers in the local area it seems (in my opinion) that some of these folks were not reporting what they were seeing to our local National Weather Service Offices. I base this on the number of chasers "pinging their locations" verses the reports coming out of the SPC. Do they have to report what they see...no! But it would be a tremendous help to the National Weather Service in issuing the appropriate warning for the local communities and areas affected if they did. To those who are already and have been doing this...good job, thanks, and keep on keeping on.

My hat goes off to Jim Tucker and the Chaves County Skywarn group concerning this springs severe weather outbreaks (and others in years past) in Chaves and Lincoln Counties. I'm pretty sure that Jim would tell me that there is room for improvement. Overall from my viewpoint here in Eddy County they are providing an invaluable service for their communities, and no doubt they have been a tremendous help and asset to the Albuquerque National Weather Service Office in issuing warnings for those counties.

Keep up the good work Jim and everyone involved in the Chaves County Skywarn Program! Justin Powell your photos and reports have been awesome...good job in getting the word out and helping your communities!

My personal opinion is that I see a recipe for a disaster to unfold in Eddy County unless there are some changes. We had a wake up call in 1991 and again in 1992 with the two then rated F2 tornadoes that produced significant damages and multiple injuries (thankfully no deaths) in the Carlsbad area. Twenty eight years later those lessons have in my opinion for the most part have been forgotten. Except of course by those whose lives were affected by those two tornadoes. I pray that it does not take another event like those two to remind our local communities, spotters, and Law Enforcement Officials of the dangers severe weather occasionally poses to our area.

Given the local population explosion over the last couple of years due to the oil field boom the next tornado to pass through one of populated communities has the potential to produce a lot of damage, destruction, and sadly many potential injuries and fatalities.

Severe thunderstorms, heavy rains and localized flash flooding are not at all uncommon in Southeastern New Mexico and will occur again. Will we be prepared next time? I can only hope.

For a short list of my blog posts concerning this threat please visit my main weather page via this link and take a look at the list in the left hand column of the page. Or visit my Climate Data page via this link...under the Header "New Mexico Tornadoes')

The Truth Is Stranger Than Fiction - And Sometimes It Hurts!
at Saturday, June 15, 2019