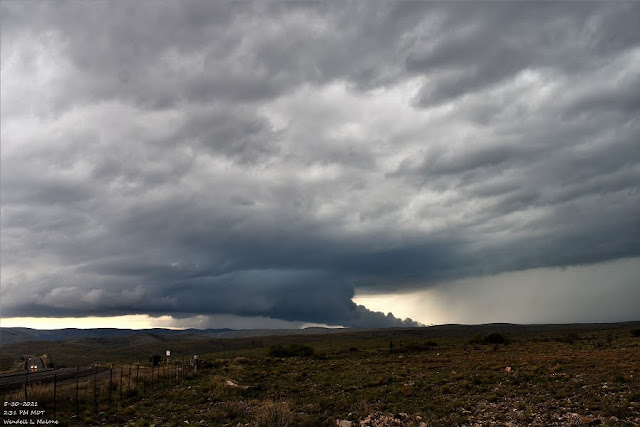 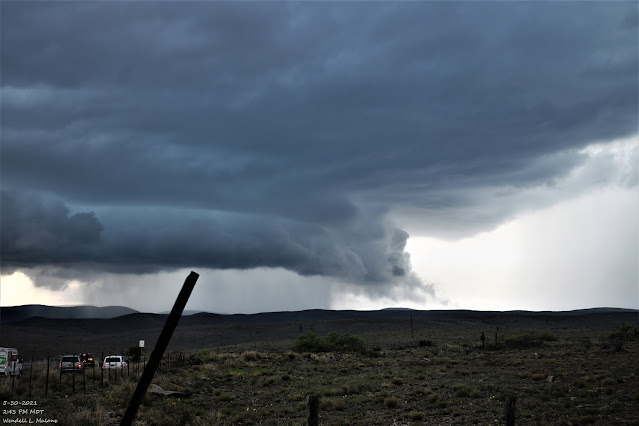 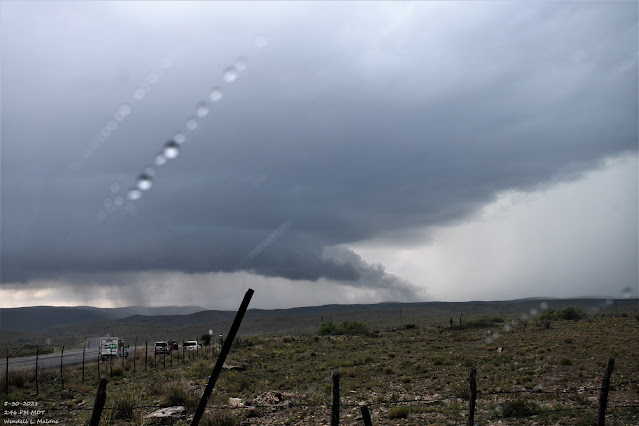 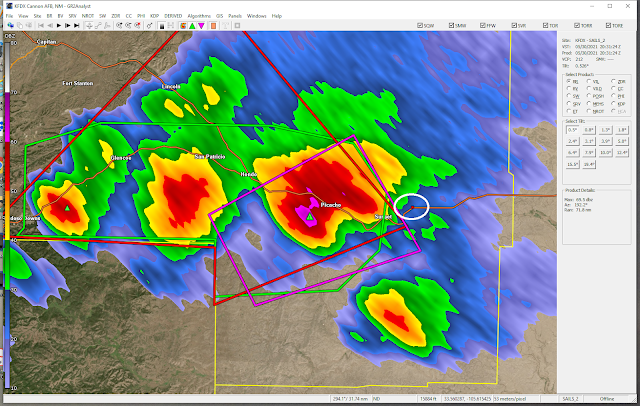 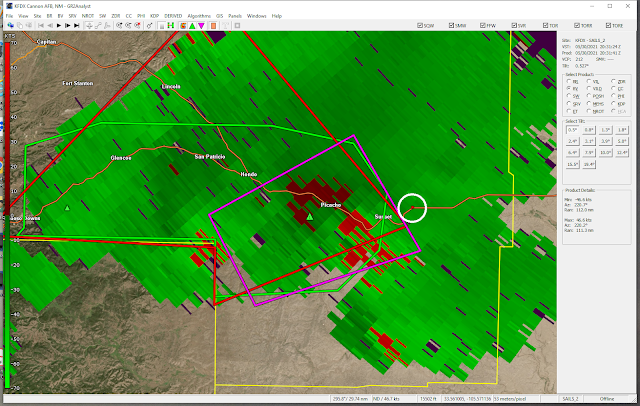 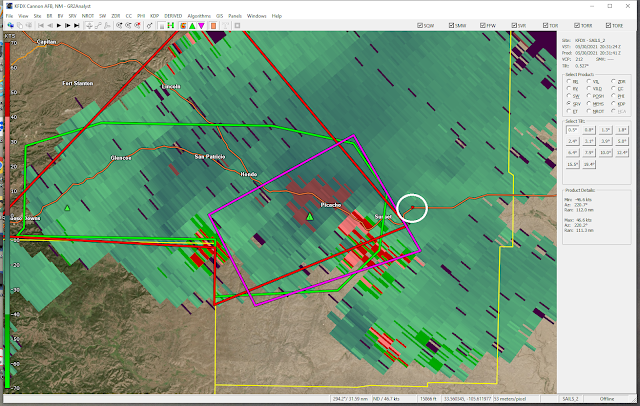 Large Rotating Wall Cloud.
Sunday, May 30, 2021, I leave Carlsbad and head north to Roswell, then shot west on US Hwy 70. The white circle with the red dot in the middle of it on the radar snapshots above denotes my location when I shot the photos above and the video below. I used my GroPro Max to shoot the time-lapse video. A beautiful storm with nice rotation but never produced a funnel cloud or tornado that I could see. A number of storm chasers were on this one. Looking back at the radar grabs of the Storm Relative Velocities it appears that the storm had a tighter circulation before I arrived.
Golfball size hail was reported in Tinnie at 2:34 PM MDT, just a few miles west of my location. My first photo was shot at 2:31 PM MDT.
Excessive Rainfall Along The Rio Hondo. 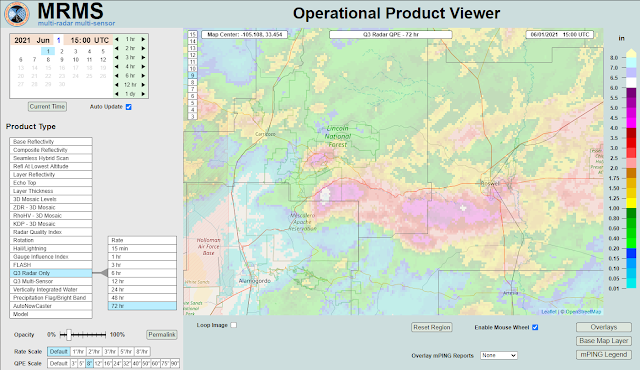 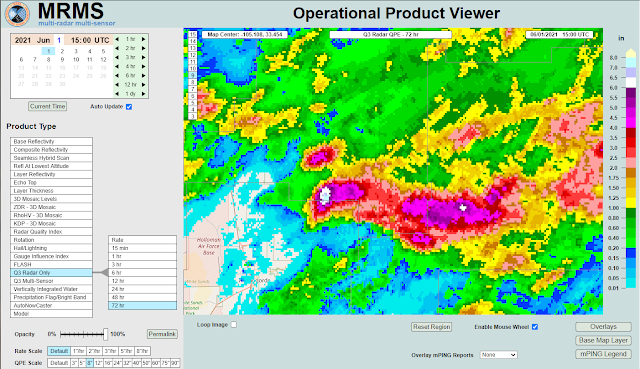 Flash Flood Fatality In Hondo.
Excessive rainfall from the Ruidoso area eastward to Roswell produced flash flooding on the Rio Hondo on Sunday the 30th. Sadly there was one fatality due to that flash flooding in Hondo when a 47-year-old woman tried crossing the flooding stream and was swept away. Her body was located some five to six miles downstream. Radar estimated some 7 inches of rain fell just south of Ruidoso Downs with a widespread swath of 3" to 6" in the area along the Rio Hondo.
New Mexico and especially Southeastern New Mexico and nearby areas have a long history of flash flooding and flash flood deaths. Supercell thunderstorms are notorious for producing all phases of severe weather including very heavy to excessive rainfall and flash flooding. Monsoonal thunderstorms are just as dangerous when considering flooding and flash flooding especially late summer into the fall in the area. Take a look at the 20212 Monsoonal Outlook for northern and central New Mexico via this link.
Storm Prediction Center Storm Reports. 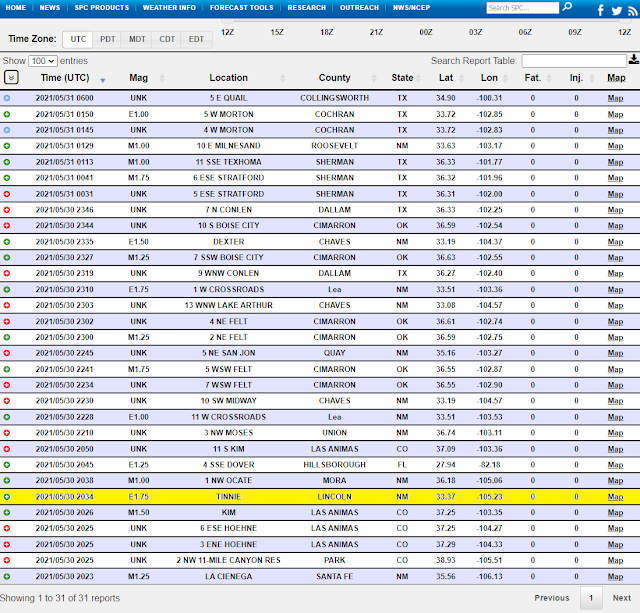 Storm chasers were once again out in force Sunday afternoon. A number of us watched this impressive rotating wall cloud and tail cloud along US Hwy 70 some 26 miles west of Roswell, or just east of Sunset and Tinnie. I started my time-lapse with my GoPro Max at 2:25 PM MDT. I never saw a tornado develop and eventually, the wall cloud dissipated. My GoPro Max video got photobombed by one of the chasers. He was from Arizona and we had a great time visiting and talking about the storm. When the cold downdraft outflow to our north hit us it caused my windshield to fog up.
My YouTube Time-Lapse Video.
The Truth Is Stranger Than Fiction!
at Saturday, June 12, 2021