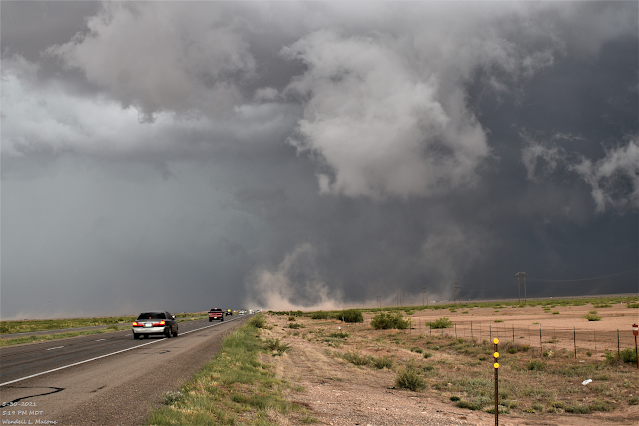 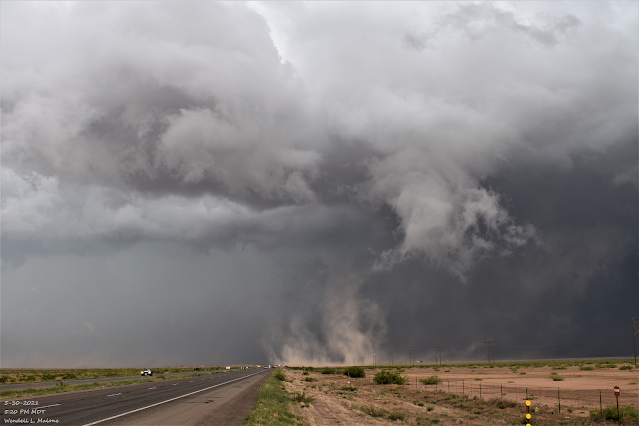 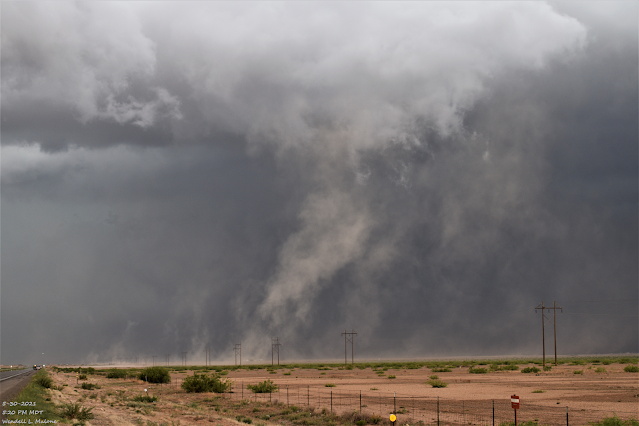 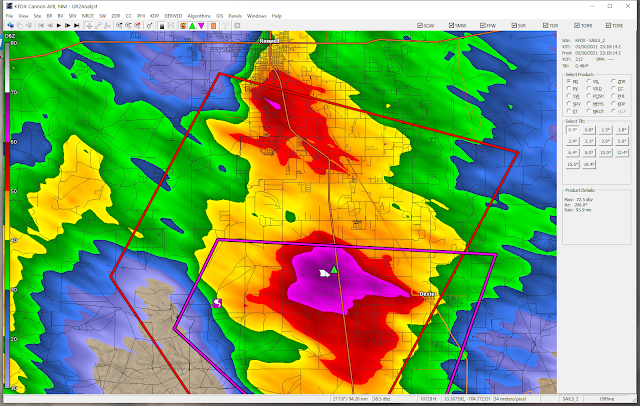 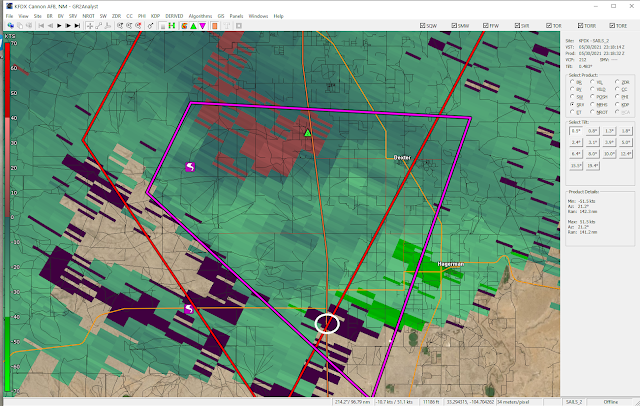 My location is marked by the white circle on the Cannon AFB Radar (GR2 Analyst SRV) screenshot above. Note that the rotation at the time of my videos and photos on the Storm Rotation Velocity (SRV) was fairly broad. The storm tried hard to tighten up but never made it. Eventually, the cold air from the rear flake downdraft undercut it.
Tornado Or Gustnado?
This one was a hard call initially. What looks like a very brief tornado spin-up actually was not in my opinion. The rear flake downdraft was raping around the small rotating wall cloud creating what appears to be brief spin-ups. But looking at the time-lapse porting of my GroPro Max video the spin-up is in front of the small rotating wall cloud. In the photos and original video, it appears as if the two are trying to connect but not so. For a little bit, I was pretty nervous because this developed rapidly and way too close to me. The original video was seven minutes long and I cut it down to three minutes for this upload. Other dust outflow whirls are visible back to the north and west of the wall cloud and these continued to the east of US Hwy 285 after the wall cloud fell apart. The spin-up under the wall cloud lasted about one minute. So I ruled this one a gustnado. I was located about a mile south of the junction of St Hwy 13 and US Hwy 285 looking back to the north-northeast at 5:20 PM MDT, of about six miles southwest of Hagerman, New Mexico.
Gustnadoes.

A gustnado is a brief, shallow surface-based vortex which forms within the downburst emanating from a thunderstorm.[2] The name is a portmanteau by elision of "gust front tornado", as gustnadoes form due to non-tornadic straight-line wind features in the downdraft (outflow), specifically within the gust front of strong thunderstorms. Gustnadoes tend to be noticed when the vortices loft sufficient debris or form condensation cloud to be visible although it is the wind that makes the gustnado, similarly to tornadoes. As these eddies very rarely connect from the surface to the cloud base, they are very rarely considered as tornadoes. The gustnado has little in common with tornadoes structurally or dynamically in regard to vertical development, intensity, longevity, or formative process—as classic tornadoes are associated with mesocyclones within the inflow (updraft) of the storm, not the outflow.[3][4]

The average gustnado lasts a few seconds to a few minutes, although there can be several generations and simultaneous swarms.[5] Most have the winds equivalent to an EF0 or EF1 tornado (up to 180 km/h or 110 mph), and are commonly mistaken for tornadoes. However, unlike tornadoes, the rotating column of air in a gustnado usually does not extend all the way to the base of the thundercloud. Gustnadoes actually have more in common with (minor) whirlwinds. They are not considered true tornadoes (unless they connect the surface to the ambient cloud base) by most meteorologists and are not included in tornado statistics in most areas. Sometimes referred to as spin-up tornadoes, that term more correctly describes the rare tornadic gustnado that connects the surface to the ambient clouded base, or more commonly to the relatively brief but true tornadoes that are associated with a mesovortex.[citation needed]

While injuries or deaths are rare from gustnadoes, strong ones can cause damage and they are hazardous to drivers. There is some speculation that a gustnado might have been responsible for the collapse of a stage at the Indiana State Fair on August 13, 2011 which killed 7 people and injured 58.[6]