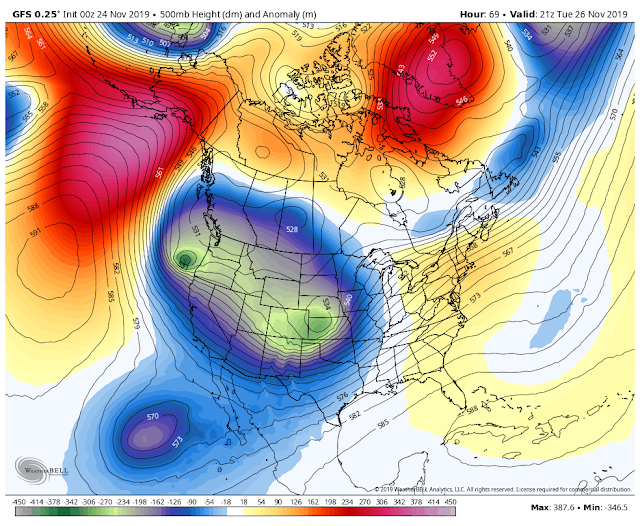 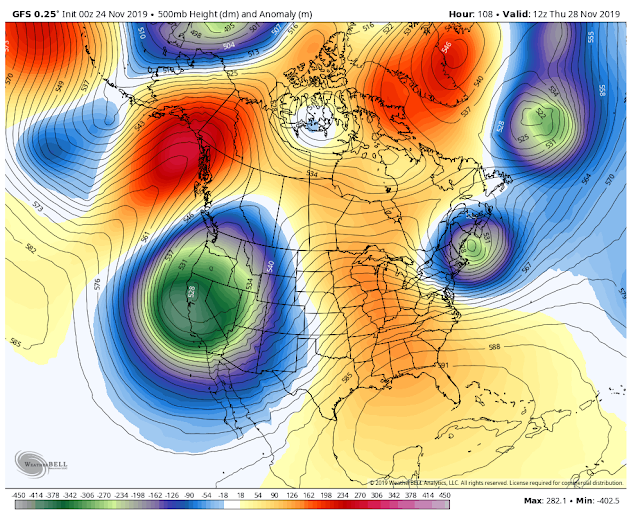 Valid For 5 AM MST Thanksgiving Morning.

A Thanksgiving To Remember!

Thanksgiving week this year will be one to remember it appears. As of this Sunday morning a cutoff upper level low remains parked well southwest of San Diego, California. This storm will get kicked to the southeast, weaken, and eventually get absorbed by a strong upper level trough of low pressure diving southward out of the northern Rockies on Tuesday. By Thanksgiving a large, deep, and cold mid-upper level closed low is forecast to be centered near central California. The other models are coming more in line with the GFS and its forecasts but there still remain differences in the timing, strength, and location of the storms to affect our area next week. 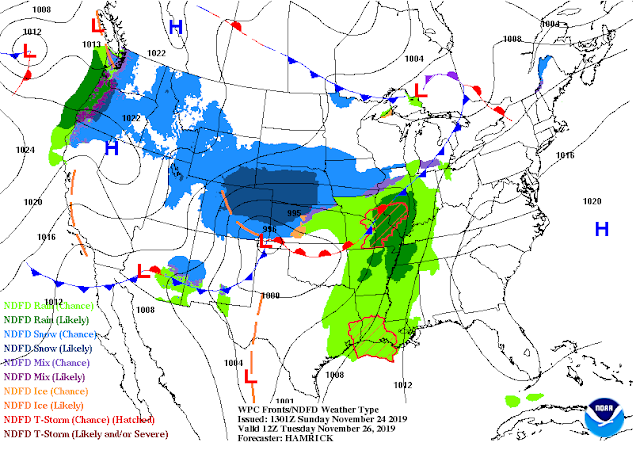 Valid For 5 AM MST Tuesday Morning. 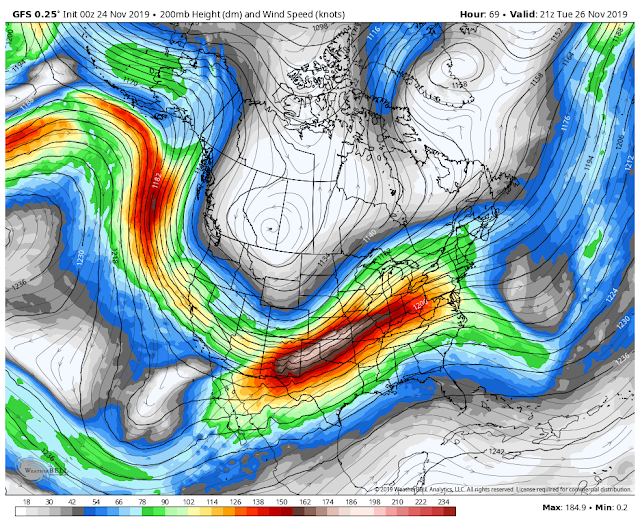 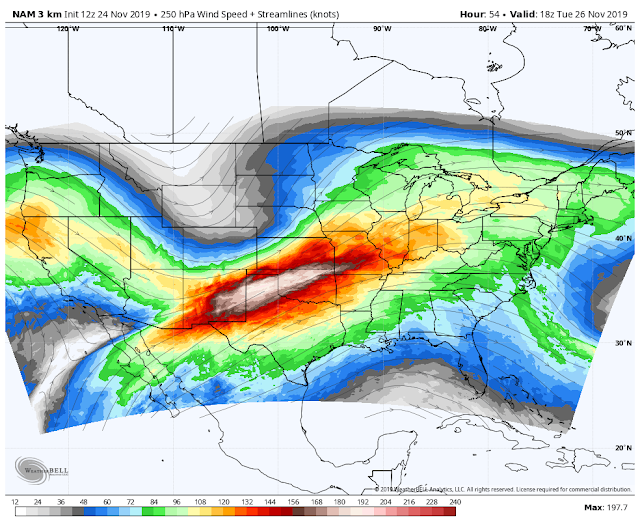 Valid At 11 AM MST Tuesday. 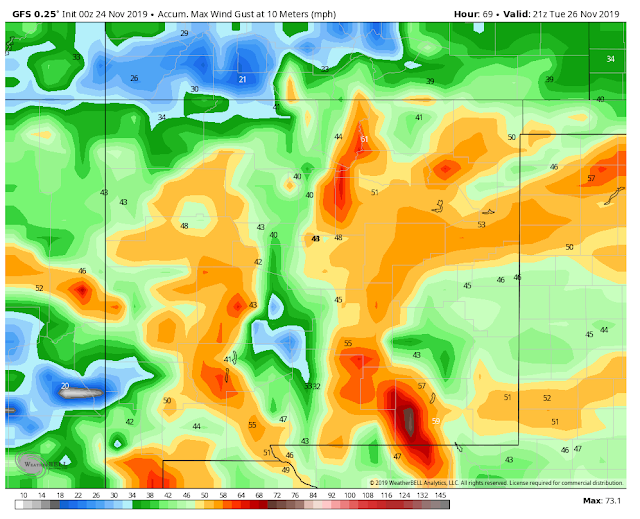 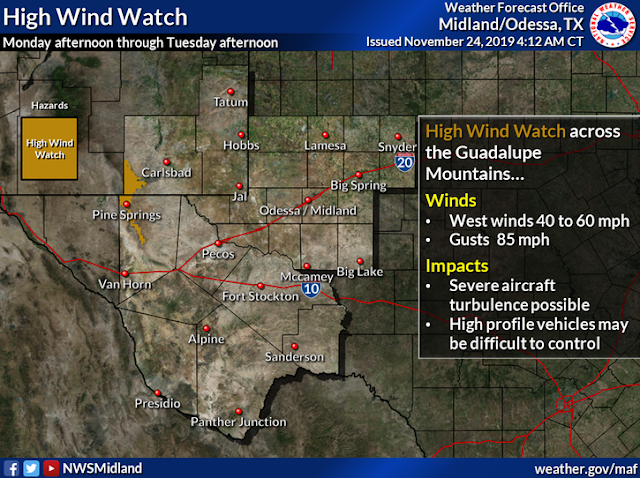 Today and Monday's weather will be rather tranquil across the local area. Highs in Southeastern New Mexico are forecast to range from near 70º to the low-mid 70's. Monday afternoon will be a little on the breezy side with southwesterly winds gusting up to around 30 mph, with some high gusts possible for the foothills and areas near the Guadalupe mountains.

Take a look at the Jet Stream forecast map above from the GFS forecast model for Tuesday afternoon. A 185 knot or 213 mph Jet Stream wind max at 39,000' (200 millibars) is forecast to be located over Northeastern New Mexico and the Texas Panhandle. Forecast winds at this level over Southeastern New Mexico will be in the neighborhood of 150 knots or 170 mph or higher.

This mornings (Sunday) 5 AM MST run of the NAM 3K forecast model is even crazier with a 198 knot or 228 mph Jet Stream wind speed maximum over the Texas Panhandle at 34,000' or 250 millibars by around noontime Tuesday. Its important to note that if this powerful upper level trough of low pressure sinks further south than what the current model forecasts indicate we would see even stronger winds that are currently forecast for the local area on Tuesday. Don't be surprised if this happens too.

Wow! We don't see that very often. This is also a good indicator of the strength of this southward bound upper level storm.

A High Wind Watch remains in effect for the Guadalupe mountains of Southeastern New Mexico and West Texas from Monday morning through Tuesday afternoon. West winds are forecast to increase Monday morning across the Guadalupe's and become sustained at 40 to 60 mph with gusts near 85 mph into Tuesday afternoon! These dangerous cross winds will cause travel problems on U.S. highway 62/180 (the Carlsbad to El Paso highway) Monday into Tuesday. Especially for high profile vehicles. It is possible that Guadalupe Pass may be closed at times due to this high wind event during this time frame.

Southwesterly to westerly winds will crank up across the local area on Tuesday as the approaching potent upper level trough of low pressure drops southward and sends a strong cold front southeastward across New Mexico.

For now expect these winds to crank up to sustained speeds of 40 to 50 mph with gusts to at least 60 mph. Local areas of blowing dust may cause issues and travel problems on area highways. Sudden drops in the visibility down to near zero will be possible especially in and near freshly plowed farm lands, construction zones (across local roadways in Southeastern  NM and West Texas), open fields, lots, and other dust prone areas. 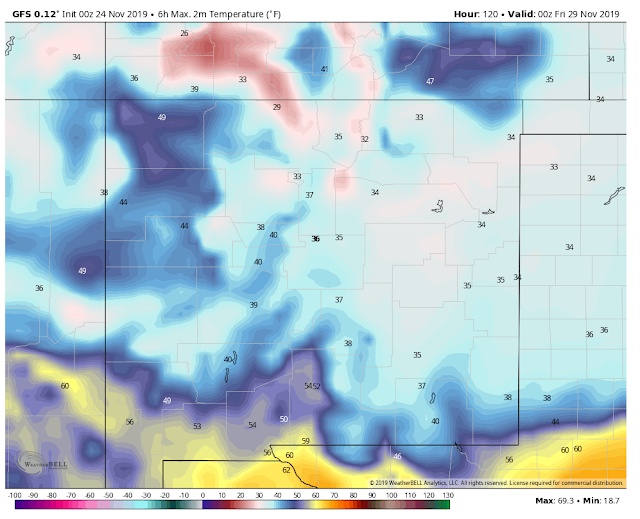 Current forecasts indicate that much of the local area may not get out of the 30's for high temperatures on Thanksgiving. Wind chill temperatures will be in the teens and 20's as well. 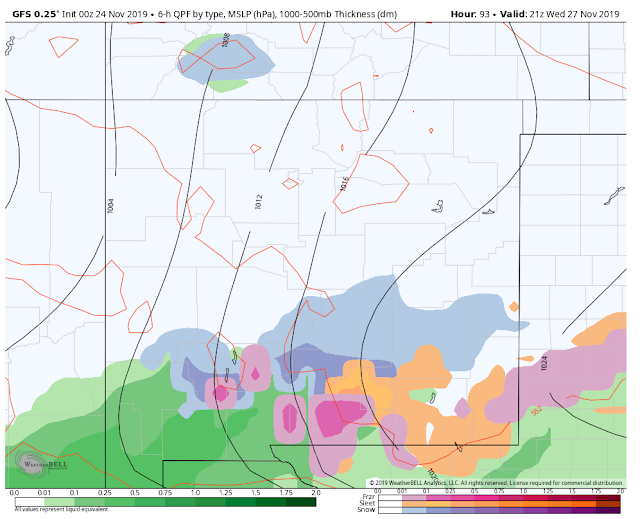 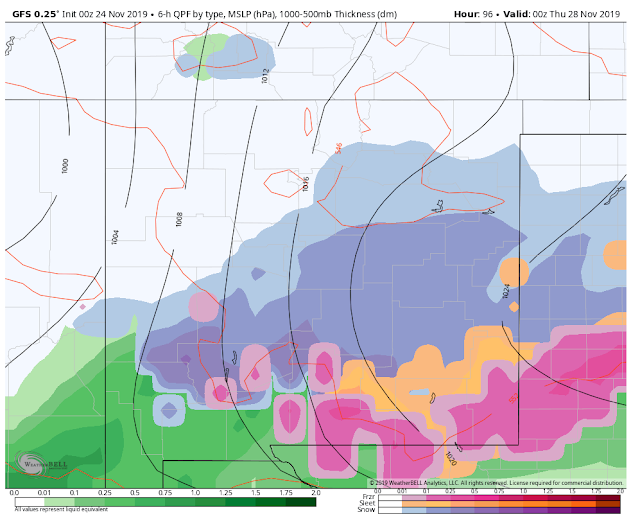 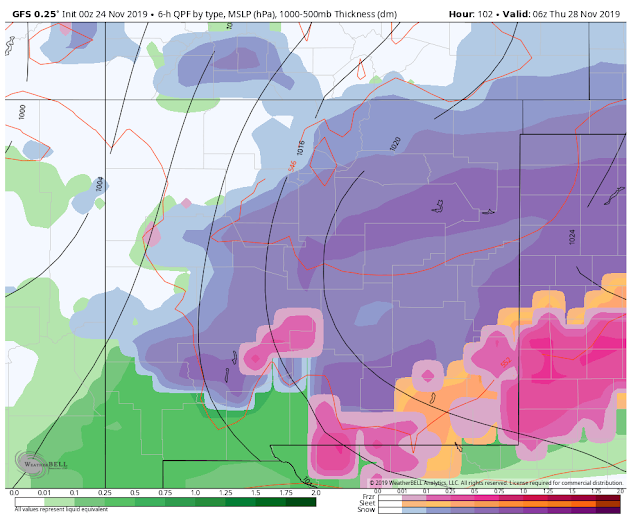 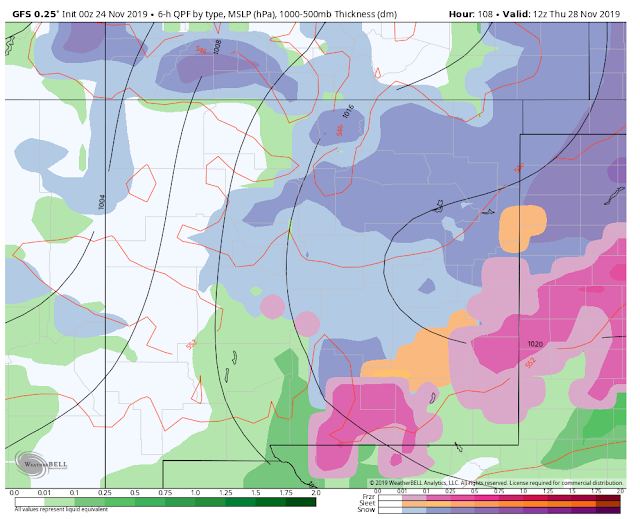 The GFS model is jumping around a little (not unusual for this to happen) with its placement and of the wintry mix of precipitation over the local area. Bottom line is don't focus on these changing model forecasts too much. The overall theme remains the same and that is that a Major Winter Storm (actually several with another Thanksgiving night into Saturday) is setting up to hammer the area (New Mexico and West Texas) Tuesday into the holiday weekend. Locally rain will change over to freezing rain, sleet, and then snow. What I'm not sure about yet is just how much snow will be get. 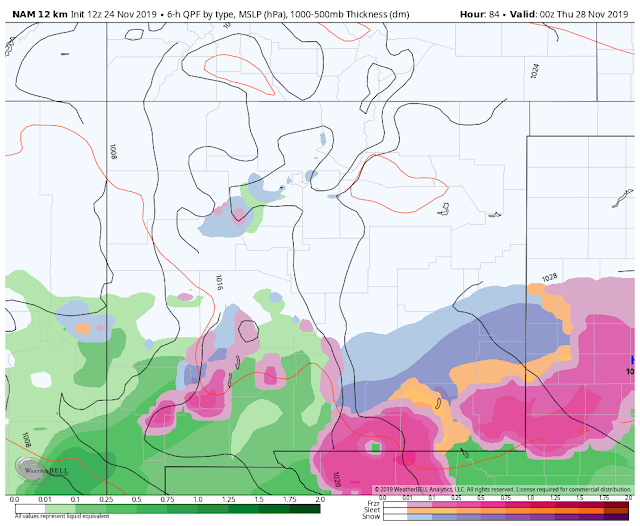 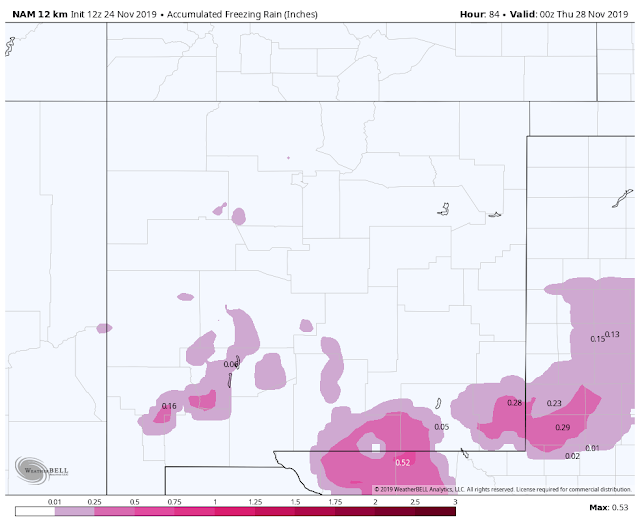 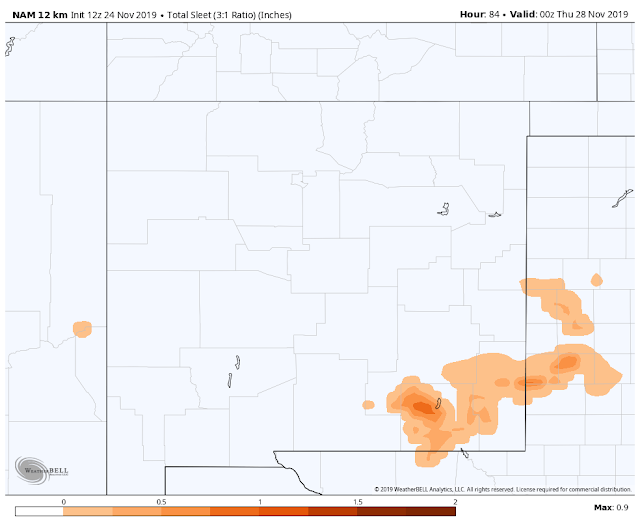 This model forecast grabbed my attention this morning for sure. This mornings 5 AM MST (Sunday) NAM 12K precipitation type forecast calls for a wintry mix of rain, freezing rain, sleet, and snow to break out over the local area by around noontime Wednesday. By sunset Wednesday we will likely be facing a nightmare on our local roadways and highways as a bad mix of freezing rain, sleet, and snow envelops Southeastern New Mexico and parts of West Texas. What is important about this forecast is that it now agrees with the GFS forecasts posted above. So the models are coming around into agreement on this upcoming nightmare of a Holiday of a Major Winter Storm. 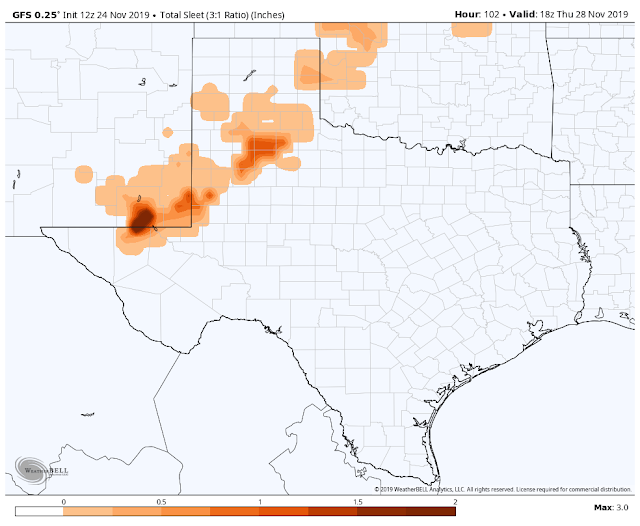 This mornings 5 AM MST (Sunday) run of the GFS model gets a little crazy with it sleet accumulation forecast. it shows 1" to 3" of sleet over Carlsbad and Guadalupe mountains and 1/2" to 1" elsewhere. 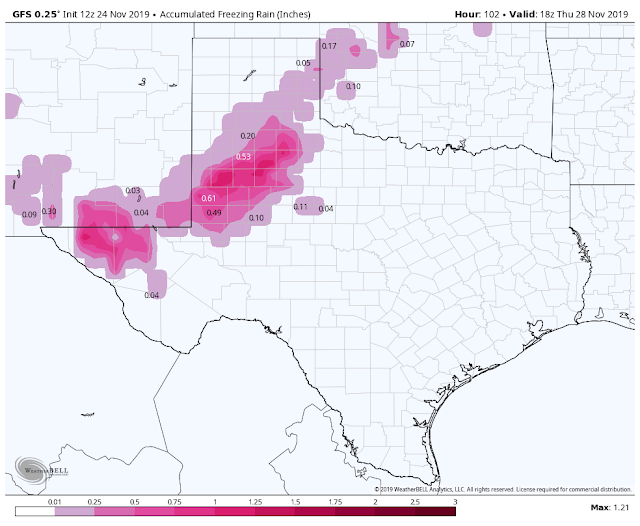 Bad news locally if the GFS forecast models latest run at 5 AM MST this Sunday morning is anywhere near correct. It calls for a widespread area of freezing rain accumulating (ice storm) on everything anywhere from a 1/4" to 1".

Another concern from this impending Winter Storm will be the possibility of widespread power outages due to the ice storm (freezing rain). Forecasts from the GFS and NAM 12K models call for ice accumulations of 1/4 to 1/2 of an inch by sunset over parts of Southeastern New Mexico by sunset Wednesday. Throw in heavy snow on top of this and let the problems with slick, dangerous highways and downed power lines and trees limbs begin. 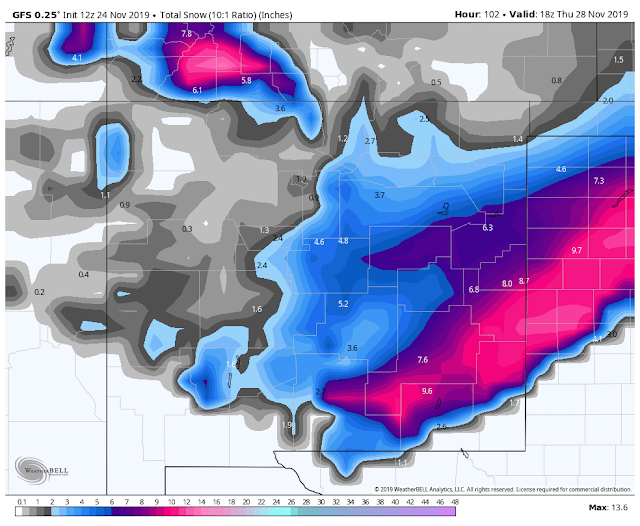 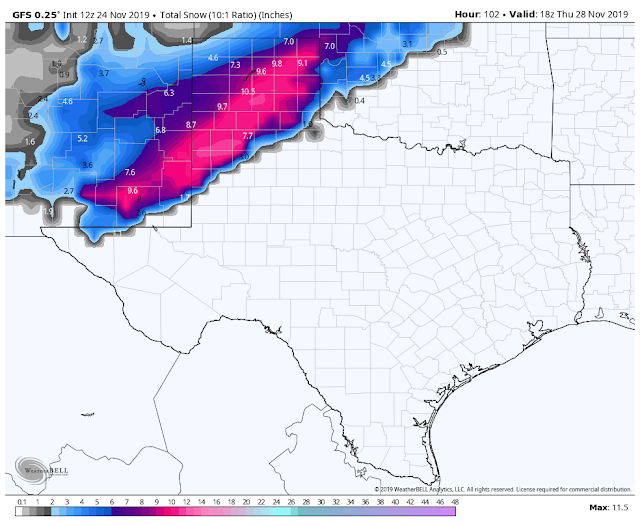 This mornings 5 AM MST run (Sunday) of the GFS forecast model continues with its them of heavy snowfall across a large chunk of New Mexico and West Texas. Generally 6" to 12" is forecast. Again don't pay too much attention to the specific locations of these maps because they will likely change between nor and Wednesday as far as exact location of the heaviest snowfall totals.

What is important is that the takeaway from all of this is that a Major Winter Storm is going to impact much of the local area Wednesday into the holiday weekend. There are going to be travel problems on local highways and roadways with the possibility of road closures area-wide due to the freezing rain, sleet, and heavy snowfall. 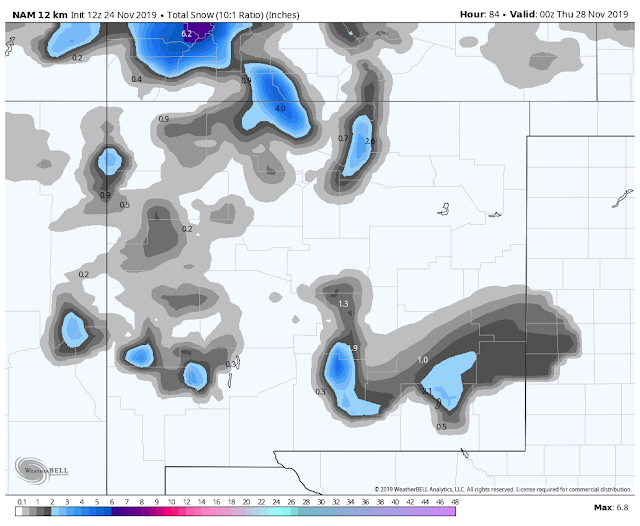 This mornings 5 AM MST (Sunday) snowfall forecast from the NAM 12K model calls for snow to start accumulating locally by sunset Wednesday. Across the Southeastern Plains generally 1/2" to 2" and in the Sacramento mountains up to around 4". Remember this is just the very first phase of a series of a couple of Winter Storms. Much more snowfall is certainly possible by Saturday locally, possibly very heavy!

Now is the time to start getting prepared for what looks like a couple of Major Winter Storms that will have significant impacts upon New Mexico and West Texas beginning Monday and Tuesday with a High Wind Event.

Conditions are forecast by the models to rapidly deteriorate Wednesday into Thanksgiving morning. Round two possibly starts Thanksgiving night into at least Friday. A combination of freezing rain, sleet, and heavy snow will likely have significant impacts across parts of Southern, Southeastern, and Eastern New Mexico. Other areas of the state may experience similar conditions depending upon the track and timing of the upcoming Major Winter Storm by mid-week.

An ice storm could cause power outages and road closures in many areas Wednesday into Thanksgiving. Heavy snow and blowing snow will also likely cause travel issues on area highways with the possibility of many road closures. Power lines and trees limbs may fall due to ice accumulation some of which may possibly be significant.

Area residents and anyone with travel plans this Thanksgiving week are strongly urged to keep abreast of all of our local weather forecasts, road conditions, potential watches and warnings concerning this Significant Major Winter Storm or Storms!

Please Visit The Following For The Latest Information:

The Truth Is Stranger Than Fiction - And Sometimes It Hurts!
on November 24, 2019
Posted by Wendell Malone