June 13, 1984.
Atoka - 4 Miles South of Artesia, NM.
At The Corner of Blevins Rd & US Hwy 285.
Courtesy of Wendell L. Malone
I was laying on the ground in the front yard of our home when
I took this photo. I estimated the southeasterly Inflow winds
into the wall cloud at over 50 mph, hence the blowing dust.
With all of the dust in the air it was hard to tell if the funnel
actually touched down. If it did it was briefly, and apparently
didn't damage anything. 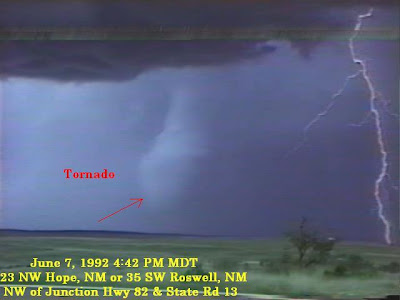 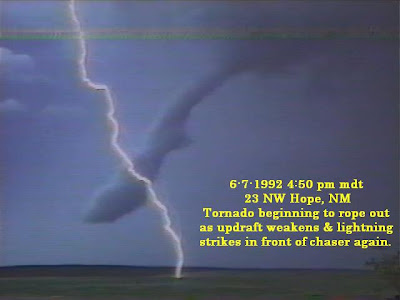 Please click on this link to see the videos. 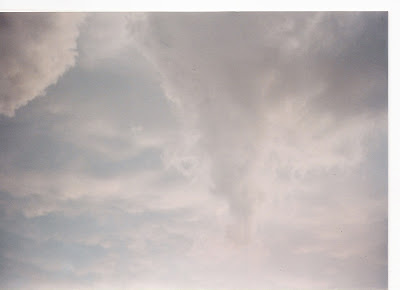 I shot this from the former FAA Flight Service Station Office
at the Carlsbad, NM Airport. This funnel cloud dropped down
about half-way to the ground west of me and then dissipated.
This was not the tornado that struck the Wagon Wheel Rd
area 3 miles to my southeast. That tornado formed later
after this funnel cloud picture was taken.

Damage on Wagon Wheel Rd From The F2 Tornado.
I Took All of These Photos The Next Morning. 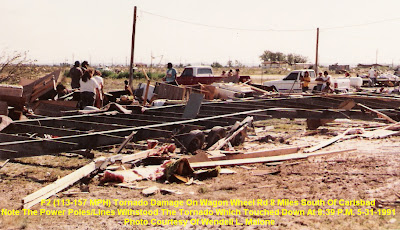 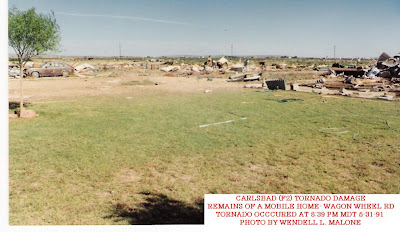 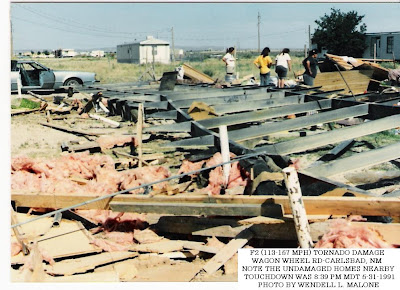 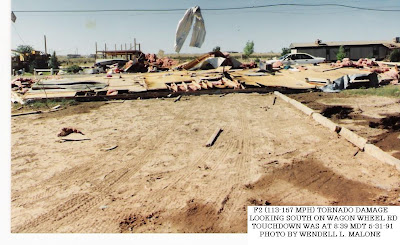 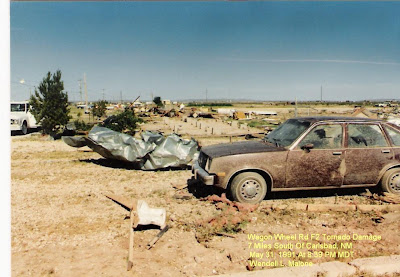 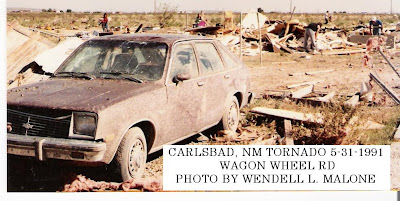 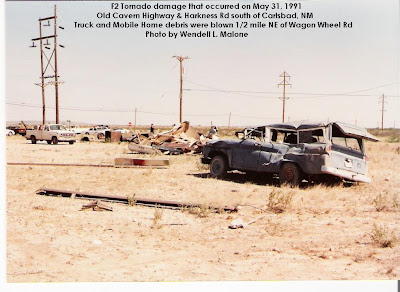 One year later on June 7, 1992, at 8:10 P.M. MDT, a tornado touched down on the west end of Church street in Carlsbad. It traveled to the east down Church street, until it hit the Taco Bell restaurant on the corner of Church and Canal streets. Six people were injured when the tornado blew out the windows in the building and ripped of part of the roof. Many trees across the central part of town had limbs torn off. Downed power lines and roof damage was common and the Joy manufacturing building was heavily damaged. The tornado was rated as an F2.Damages were estimated at $250,000. 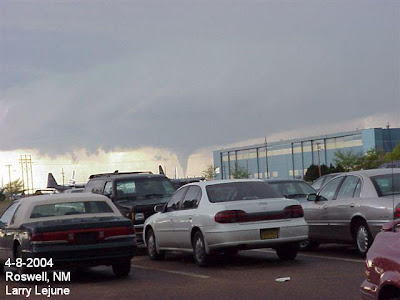 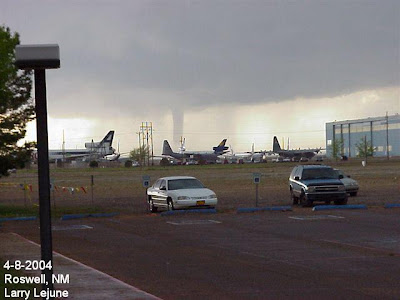 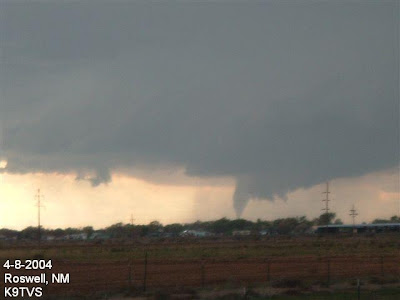 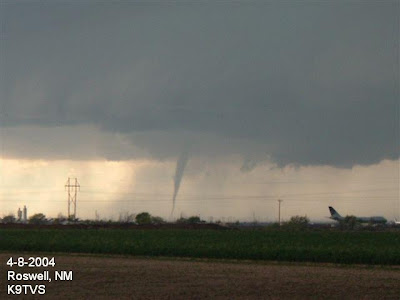 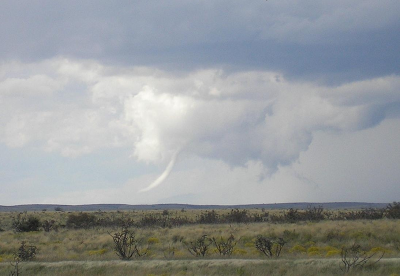 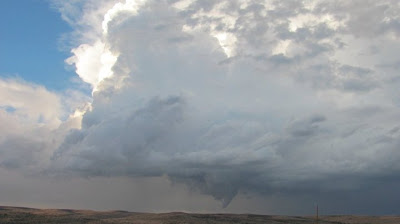 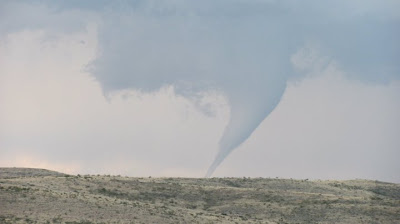 This is a very select and limited collection of tornado, funnel cloud, and tornado damage photos form across southeastern New Mexico. For a long time (in fact for years) I have been saying that the reason that most tornadoes in the past have gone undocumented here in southeastern New Mexico, is because we are so sparsely populated. One of my favorite sayings is that we have miles of miles of nothing but miles and miles out here. Most of our tornadoes have occurred over open countryside where there is little to damage.

Prior to the mid 1980's the number of Skywarn Storm Spotters locally was pretty sparse. Over time the number of spotters has increased, especially over the past 7-10 years. The National Weather Service Doppler Radar (88-D) didn't arrive in our area (NWS Midland) until the early 1990's. So prior to this radar coverage across most of southeastern New Mexico was extremely poor and nonexistent.


Radar does not detect tornadoes, but it detects the rotation within the thunderstorms that may produce a tornado. This technology was not available locally until the early 1990's. The nation-wide network of National Weather Service Radars is currently undergoing an upgrade. This is known as Dual-Polarization. This upgrade will greatly enhance the existing radar networks ability to better detect what is going on inside of storms.

I have often said, and always believed, that there has been more tornadoes that have occurred here locally than the numbers or stats reflect due to the above reasons. And until recently, if a tornado touched down in a rural area, and there was no structural damage noted from that tornado, it was then classified as an F0 on the old Fujita rating scale.


So its entirely possible that since 1950 there may have been one or more tornadoes that have occurred in southeastern New Mexico that went unreported, and if so, will not show up on the maps listed below.

On October 9, 1938, a tornado touched down seven miles southwest of Carlsbad and reportedly stayed on the ground for seven miles. Cotton fields were destroyed in a path that was estimated to be two miles wide and seven miles long.Although the newspaper article did not indicate if most of damage this was from the tornado or hail, I believe it was from the hail. Two homes were destroyed and fourteen people were injured. Ten children and their mother were treated at a local hospital for their injuries. Hail injured the children after the tornado blew away their home. The hail was reported to have been six inches deep and drifted high up on the sides of buildings.

On June 18, 1949, a tornado touched down on the south side of the city of Artesia at 6:30 P.M. The National Guard building was heavily damaged and a number of farm buildings were destroyed. Thirteen power poles were blown down and a large hay barn was destroyed. The tornado moved from west to east across the south edge of town. Hail and high winds stripped the ground bare of the local cotton crop. An incredible three inches of rain was reported to have fallen in twenty minutes, which caused flash flooding on Eagle Draw with dozens of cars stranded in city streets. No injuries were reported.
In May 1973, a tornado touched down in Atoka four miles south of Artesia. This tornado damaged our home on the corner of Blevins road and highway 285. It drove our fireplace chimney through our roof and into the living room, torn off our screen door and door on the east side of the house, ripped off large elm tree limbs, downed power lines, tore air conditioners off of our neighbors homes. The tornado’s damage path was clearly visible as it traveled northeastward across our alfalfa hay filed and across our neighbors alfalfa hay fields. My mother watched in horror as my brother was caught outside and was picked up by the tornado and spun around the back yard of the house and then pinned upside down against the fence. The fence probably saved his life and kept him from being blown away. This storm is not listed in the Storm Events Data Base. This is my mothers, and brothers, and my account of that tornado.
On July 5, 1981, at 1:00 A.M. a tornado touched down on the northwest side of Carlsbad near the High School. Trees were uprooted and power lines were blown down. The Planetarium at the High School was damaged and the High School roof was blown off. No injuries were reported but damages amounted to $250,000. The tornado was rated as an F1.
On September 1, 1983, at 5:50P.M. a tornado touched down on South First street in Artesia and causes $250,000 in damages. The tornado was rated an F0 and was ten yards wide.It blows roofs off of homes, downs trees, power lines, and blows out many windows in nearby homes. The Save More Gas Station canopy was blown in the cemetery east of gas station. The I beams supporting the canopy were twisted like pretzels. A local restaurant had its roof lifted up and then slammed down again while filled with customers. Witnesses said that the tornado was white in color and sounded like a swarm of bees but was barley visible because it was wrapped up in the rain and hail.
On May 31, 1991, at 8:39P.M. MDT, a tornado touched down on the southwest side of Wagon Wheel road seven miles south of Carlsbad and cut damage path from southwest to northeast that was two hundred eighty three yards wide, and one mile long. Thirteen mobile homes were totally destroyed.Fifty-seven other homes and buildings were damaged. Twenty-one people were injured with ten of those receiving treatment at the hospital. The tornado was rated an F2 on the Fujita tornado scale. Damages were estimated at $2.5million.
One year later on June 7, 1992, at 8:10P.M. MDT, a tornado touched down on the west end of Church street in Carlsbad and traveled to the east down Church street until it hit the Taco Bell restaurant on the corner of Church and Canal streets. Six people were injured when the tornado blew out the windows in the building and ripped of part of the roof.Many trees across the central part of town had limbs torn off. Downed power lines and roof damage was common and the Joy manufacturing building was heavily damaged. The tornado was rated as an F2. Damages were estimated at $250,000.
On July 1, 1995, at 6:58 PM, a large tornado was observed forming near the Roswell Correctional Center west of Lake Arthur. The tornado moved to the southeast and was estimated to have been between one-quarter of a mile wide to one-half a mile wide at times. The tornado was on the ground from about 17 miles south of Roswell, to justnorth of Artesia where it dissipated before causing any known damage. Many people crowded north 13th street north of Artesia to view this very large tornado. Golf ball size hail reportedly piled up several feet deep near the Roswell Correctional Center.
On December 2, 1997, a tornado touched down near the Hagerman area south of Roswell. A thunderstorm which developed along a cold front moving into south central Chaves County produced a small, brief tornado. The tornado formed in an environment of northeast surface winds and moderate southwest winds aloft. This is only the second recorded tornado for December in New Mexico. Previously a tornado was reported December 26,1966 near Pojoaque, in Santa Fe County. It was reported to be 50 yards wide and was rated as an F0.
Please note that the data base that I have been using for this information is currently being upgraded by the Storm Prediction Center. Currently this data base only goes back to 2006. I used this links information in the past for data from 1950-2010, but it is also being upgraded. Prior to 1950 I used articles that I researched in the Carlsbad and Artesia News Papers.