May 11, 1989 NW of Artesia, NM.
This is a 20 year old copy of a VHS tape shot 15 miles NW of Artesia, NM, in SW Chaves Co on May 11, 1989. Large Wall Cloud & Funnel Clouds. Did they touch down? It's hard to tell from the video. VHS copy is courtesy of Steve Divine formerly of Roswell, NM & KBIM TV-10. Thanks Steve.
June 7, 1992 NW of Hope, NM.
On June 7, 1992 Storm Chaser David Hoadley shot this incredible video of a large tornado 23 miles NW of Hope, NM. I downloaded his video from a 17 year old VHS tape that I received from the Midland/Odessa NWSFO back in the early 1990's. Later that evening a then rated F2 tornado raked downtown Carlsbad, NM. Six people were injured when the tornado blew out the windows, and blew off the roof of the Taco Bell Restaurant in downtown Carlsbad. The tornado was 73 yards wide, and cut a damage path through the city 1 mile long.
Note: This is the fast forward version (4X the normal speed) of the original upload.

May 25, 1999 North of Artesia, NM.
More weak tornadoes just N of Artesia New Mexico off Hwy 285. Looking due W and then N as weak tornado crosses the hwy. This is the same cell that produced several small white ropes earlier. We had a great time in New Mexico In 99'.
May 26, 1999 SW of Elida, NM.
Tornado intercepted just SSW of Elida New Mexico May 26th, 1999. My son Paul and I scored a repeat catch this day and as for as I know were the only chasers on this cell which was sandwiched between a cell to the N near Clovis and one to the S near the Texas border. We filmed several small needles spinning out prior to the large one and had no roads to the E. This cell would cross into Texas spitting out reported softball ice rocks. Video: Paul Oliver & Randall Oliver.
March 23, 2007 Near Tatum, NM.

KRQE News 13 photojournalist Mark Cory recorded a tornado churning across rural Chaves County nor of Roswell on Thursday Oct. 21, 2010.
Videos Are Courtesy Of Chaves Co NM
Skywarn Coordinator/Storm Chaser Jim Tucker.
SKYWARN spotters and several members of the general public filmed the tornado while looking north on Highway 246. The tornado was also viewable from the town of Roswell. This tornado primarily impacted the Salt Creek Basin for approximately nine minutes. This EF-0 tornado had peak winds around 65 mph. No significant damage or injuries were reported.
SKYWARN spotters and emergency management officials noted a second tornado while looking north from Highway 246. This tornado began just west of Highway 285 and north of Verbena Road. Peak winds were estimated around 65 mph. No significant damage or injuries were reported.
The Truth Is Stranger Than Fiction!
My Web Page Is Best Viewed With Google Chrome. 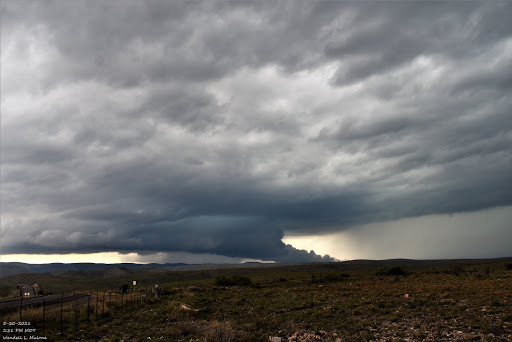