Showing posts from 2019
Show all

12-29-2019. Courtesy Of Bonnie Farr Rogers In Hope. 2" Of Snow On The Ground In Hope, NM 20 Miles West Of Artesia Sunday morning. 12-29-2019. Courtesy Of  Jacob Riley @jrileywx On Twitter. Some portions of Lea County New Mexico saw a light dusting of snow this morning. This was in Lovington, nm this morning around 8 AM. Tune into KAMC News tonight at 10 PM to find out if we could see any more later this week. #NMwx #Snow #KAMC Reported Snowfall Totals. Our little storm that could, did as it zipped across Southeastern New Mexico Saturday night into early Sunday morning. It dropped heavier snow than expected at Ski Apache . The models were calling for around a foot and they reported 19" in 24-hours Sunday morning. With 21" in 48-hours which brings their season total (Oct 1st - Dec 29th) to 33". They now are reporting a base depth of 38" (9,600').  2" was reported on the ground in Hope Sunday morning. A Cloudcroft CoCoRa
Post a Comment
Click On This Link To Read More » 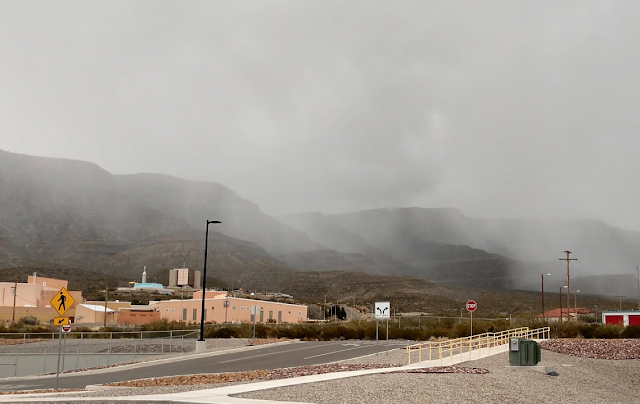 Snow Is Falling In Alamogordo, NM. At 3: 30 PM MST This Saturday Afternoon. Courtesy of  William Powell  on Facebook.  Looking up at Horse Ridge from the Walmart on Indian Wells, with NMSU-Alamogordo at left and the space museum just beyond. Visible Satellite Image. At 2:36 PM MST This Saturday Afternoon, December 28, 2019. Surface Map Forecast. Valid At 11 PM MST This Saturday Night. A second cold front is forecast to sink southward into the local area by around midnight tonight. Colder air will filter south with the frontal passage. This will help change light to moderate rain over to light to moderate snow along and just behind the front as it moves south. Snow is falling early this afternoon in the Ruidoso and Cloudcroft areas. Judging by the visible satellite image this activity appears to be convective in nature so periods of moderate to heavy snowfall will continue to occur through tonight. Light snow showers are occurring in the Alamogor
1 comment
Click On This Link To Read More »
More posts