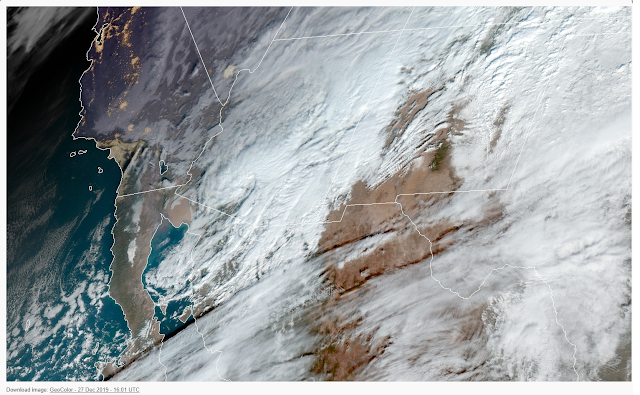 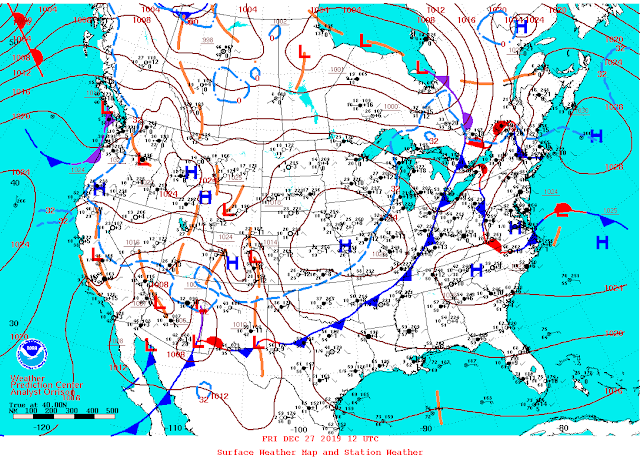 At sunrise this Friday morning a weak cold front had slipped southward into the Southeastern Plains and nearby West Texas. Low-level easterly upslope flow had moistened up the lower levels of the atmosphere overnight into this morning. Resulting in low clouds and fog blanketing the local area. Skies should begin to clear this afternoon allowing ample sunshine which should help warm and destabilize the atmosphere. 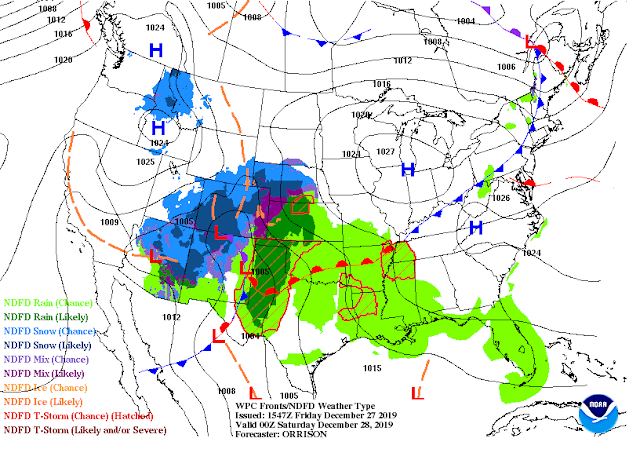 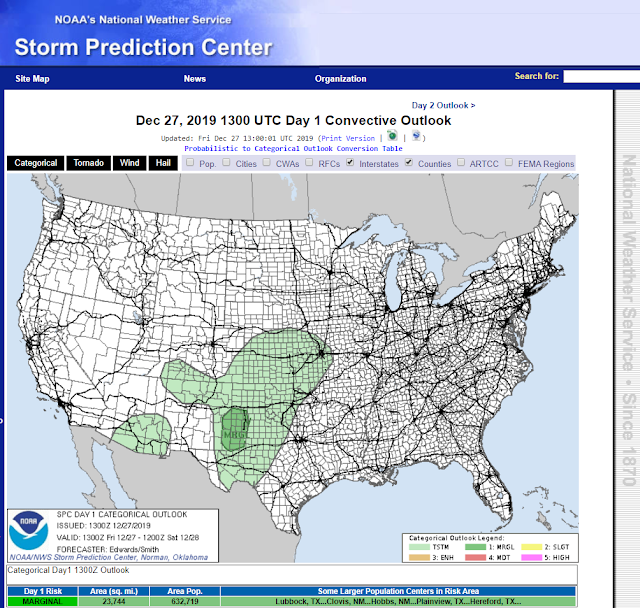 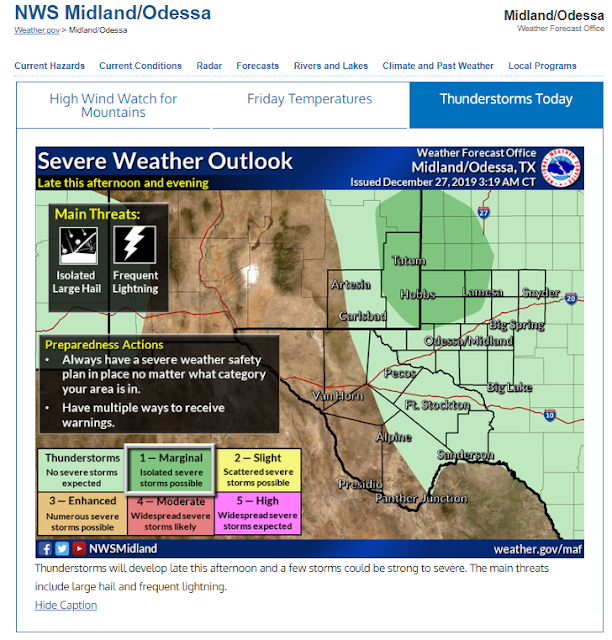 Isolated thunderstorms are forecast to develop across parts of Southeastern New Mexico and West Texas late this afternoon and evening. There is a marginal risk for a few of these thunderstorms to become severe. The main severe weather threats at this time (as of 9 AM MST) will be large hail. How widespread (or not) this event will be will in large part be determined by how much clearing takes this afternoon and how much the atmosphere is able to warm and destabilize. 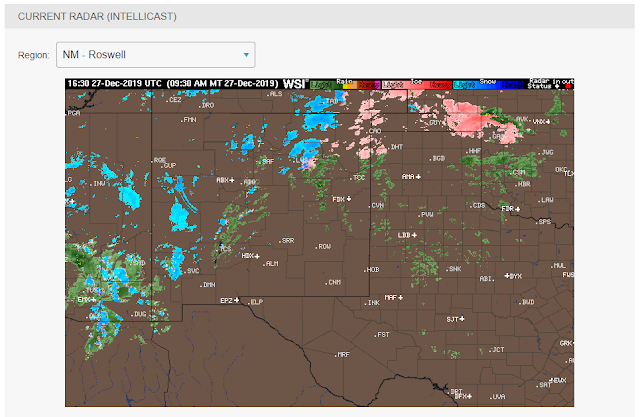 A wintry mix of light rain, freezing rain, and light snow has broken out across parts of New Mexico and nearby areas this morning as the winter storm from the west (southwestern Arizona) approaches. This activity is forecast to become more widespread and increase in intensity as a Pacific cold front and the storm approaches from the west this afternoon into tonight. 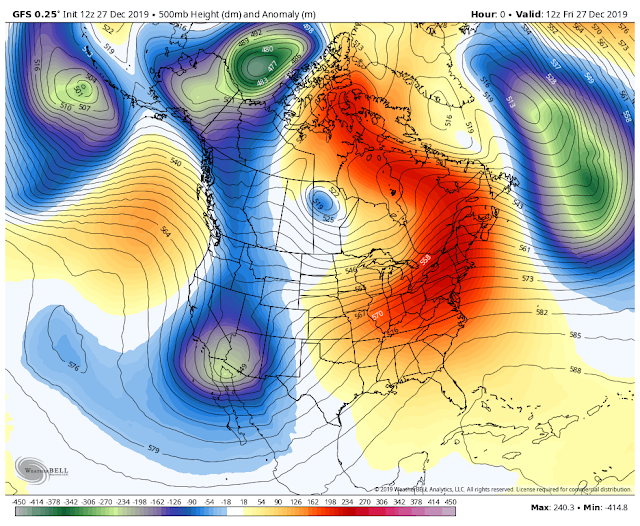 Our approaching mid-upper level closed low at about the 18,000' level was centered near Yuma, Arizona at sunrise this Friday morning. 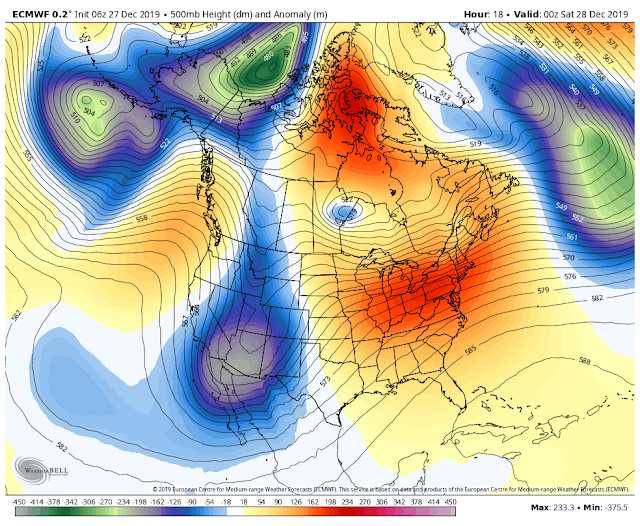 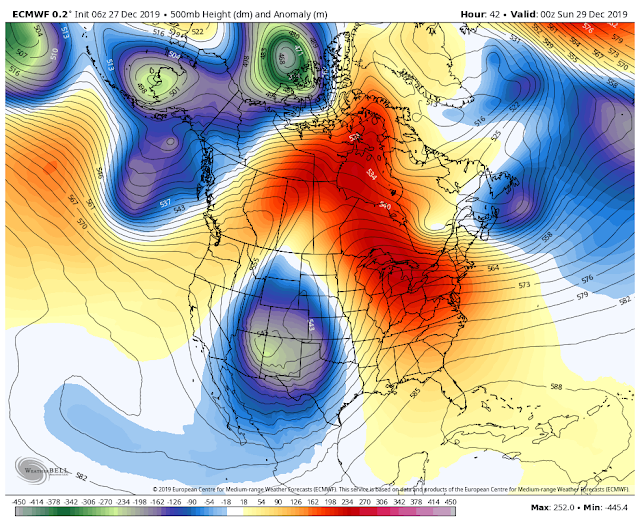 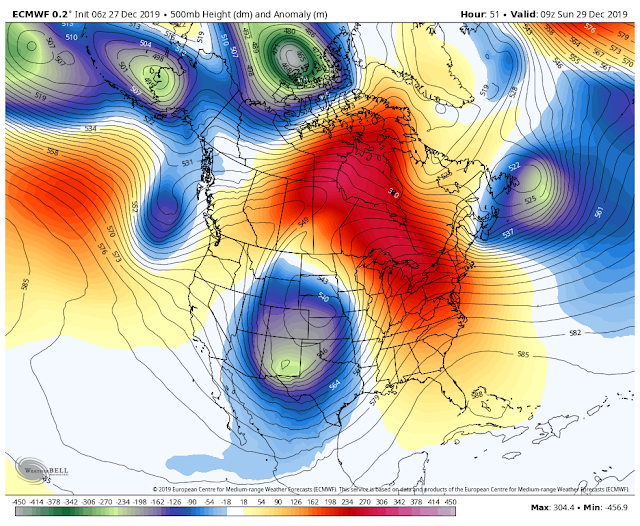 The models are doing a pretty good job of moving it slowly eastward today into Saturday. By around 8 PM MST Saturday the ECMWF tries to develop a secondary closed center over the Ruidoso area with the main core of the low in southeastern Nebraska. By around noontime Sunday the ECMWF opens up the low and lifts it rapidly northeastward centered near southeastern South Dakota and northeastern Nebraska with a secondary center near the DFW area.

As I've mentioned several times over the past couple of days should this closed low to our west slow down, dig further south, and linger over New Mexico longer than currently forecast then we will see more widespread and heavier rainfall and snowfall totals than are currently forecast. On the other hand if the low opens up and lifts northeastward out of the area quicker than forecast by the models then we will see less precipitation from the storm. 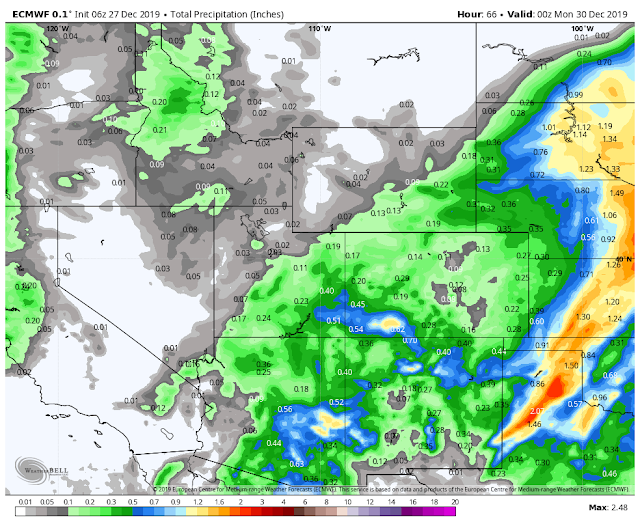 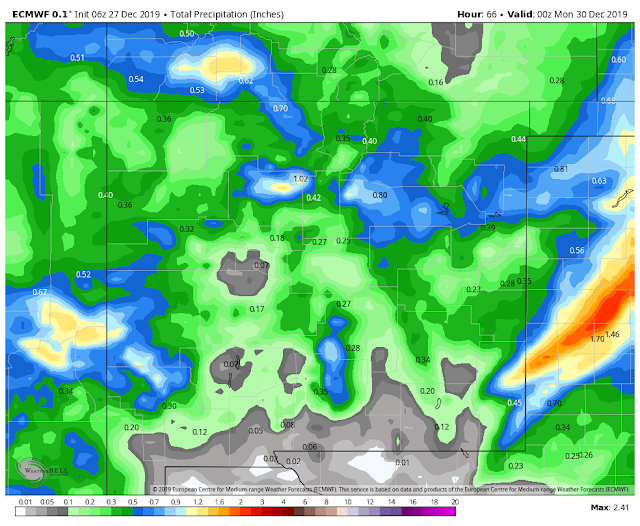 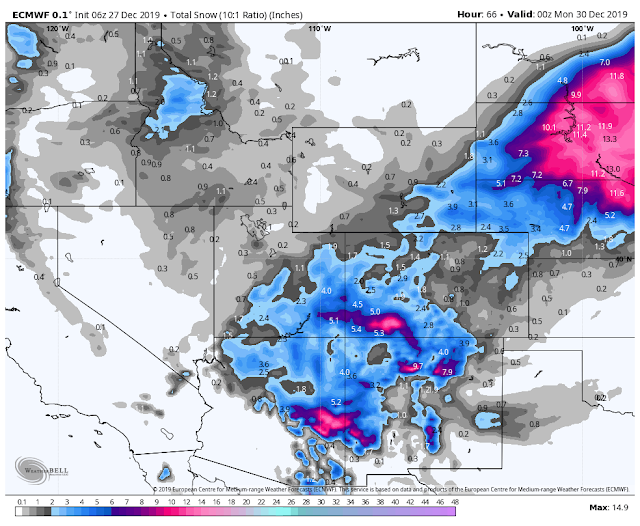 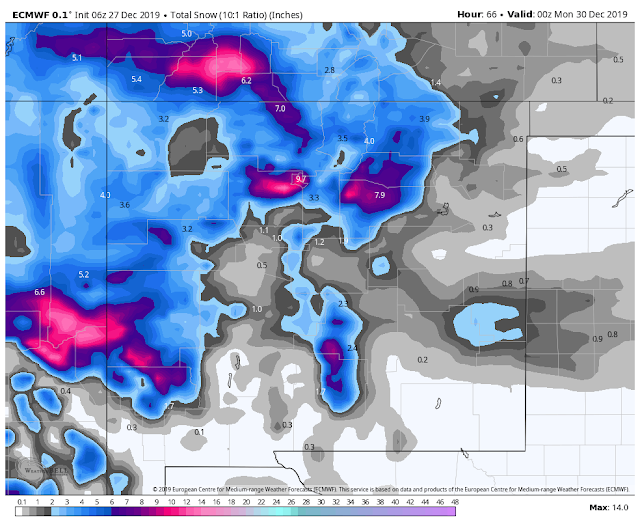 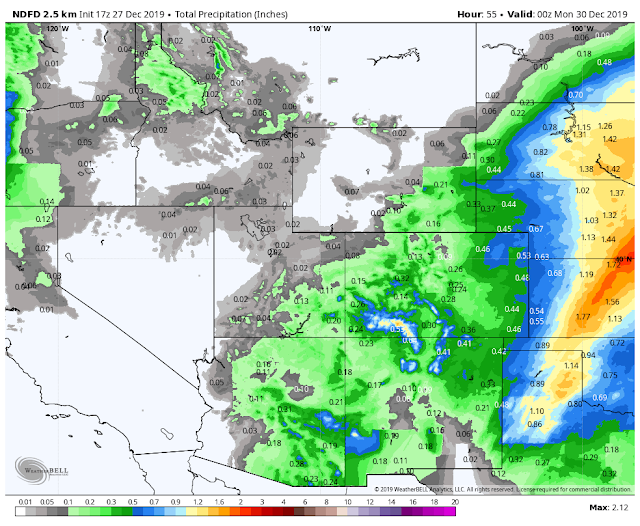 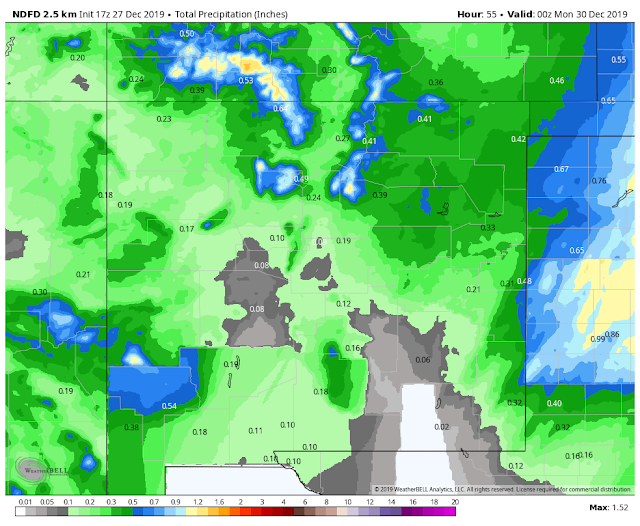 Rain showers and isolated to widely scattered thunderstorms are in our local forecast this afternoon and evening. Current model projections give the best chances for storms over and near the NM/TX State line late this afternoon and evening. Some of these will be capable of producing locally rainfall with a few storms capable of producing an inch or so of rain. 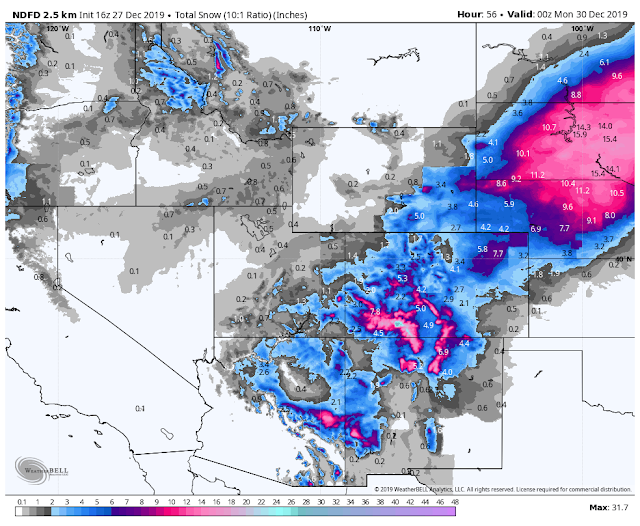 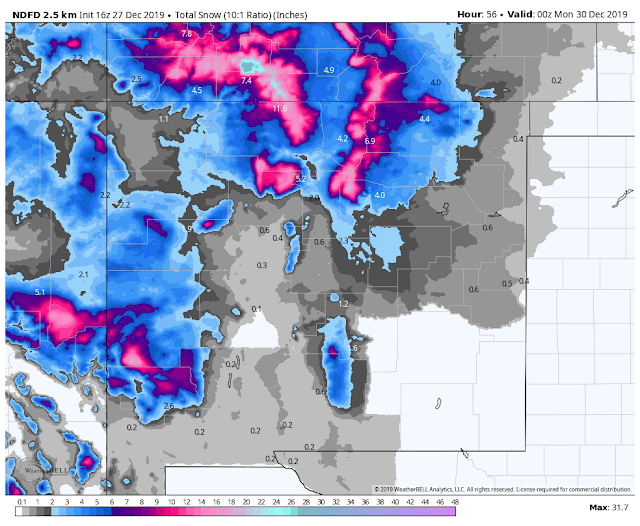 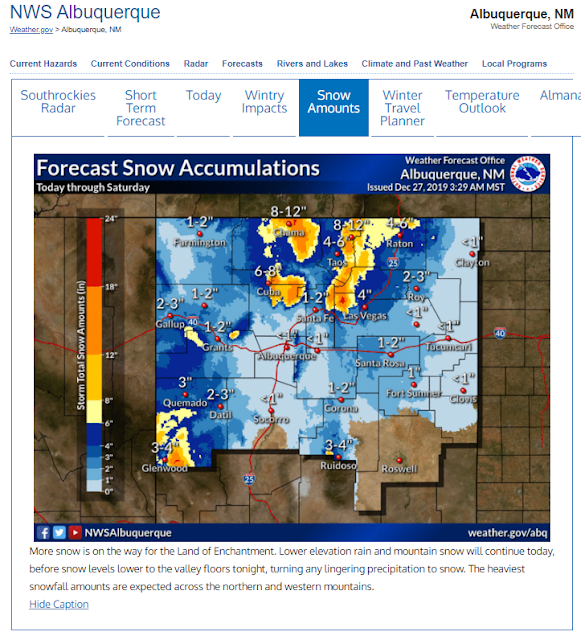 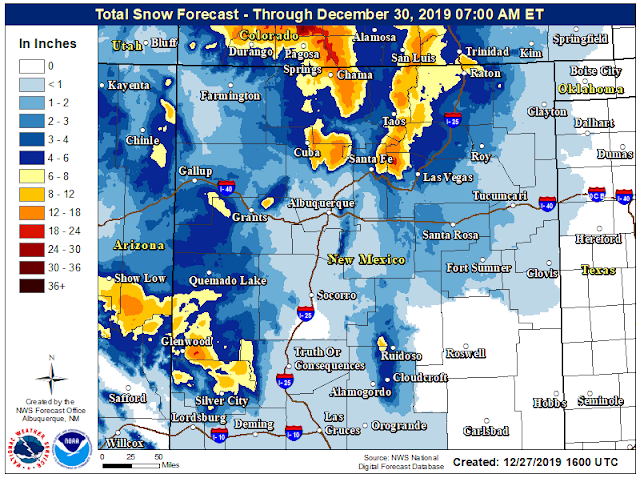 Heavy snows are likely with this approaching winter storm across the higher elevations of Southwestern, Western, Northern New Mexico, as well as parts of the Northeastern Plains and South-Central Mountains.

Ruidoso and surrounding areas may pick up a couple inches of new snow while the Ski Apache Resort may see close to a foot of new snow by Sunday afternoon. Cloudcroft is looking at 1" - 4" with more above 9,000'. Snow levels are forecast to start out fairly high today (around 8,000') but drop with the Pacific frontal passage tonight down to around 4,000'. 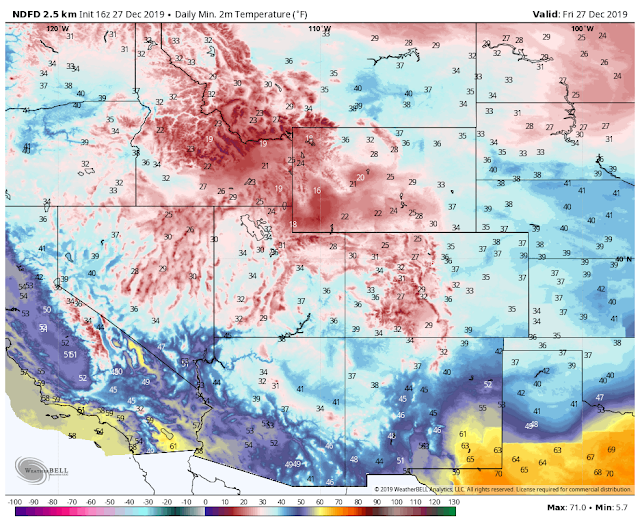 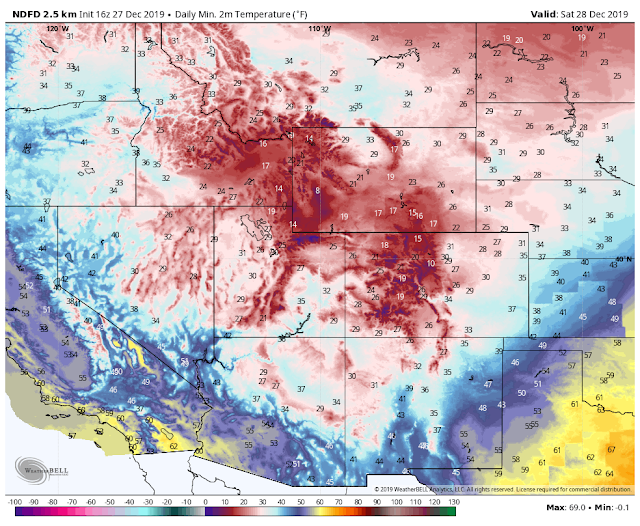 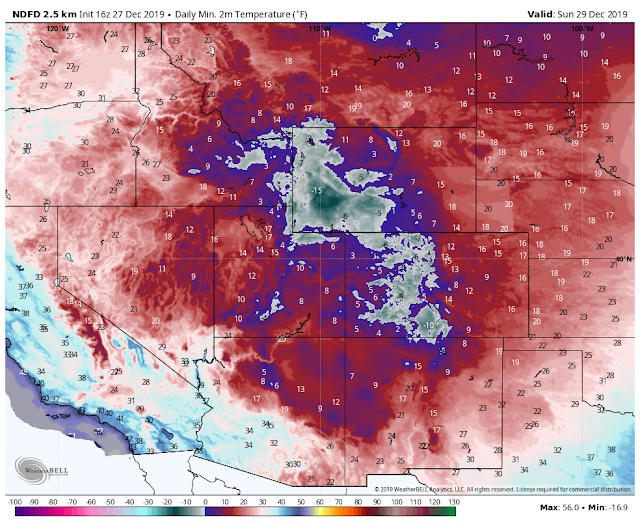 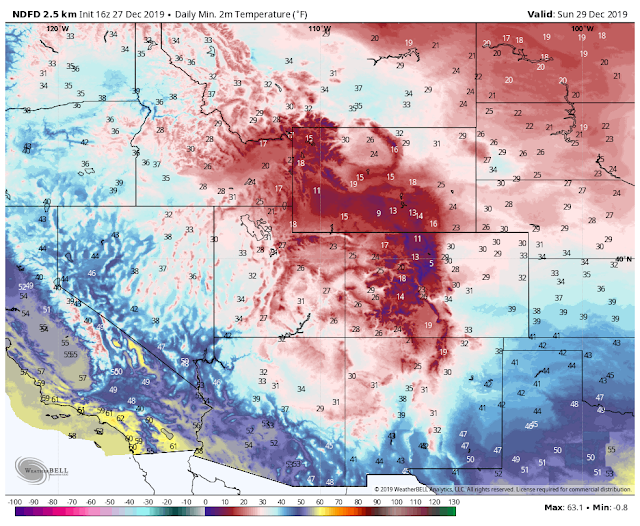 The Truth Is Stranger Than Fiction - And Sometimes It Hurts!
on December 27, 2019
Posted by Wendell Malone