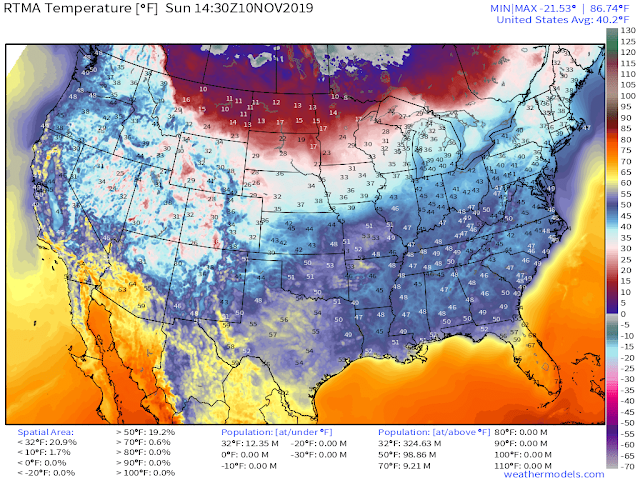 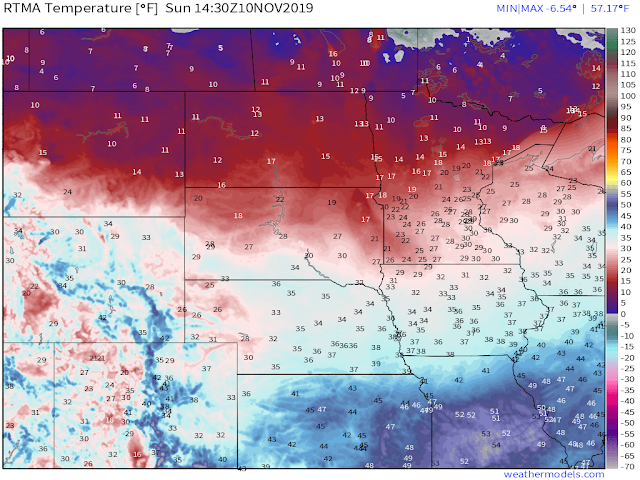 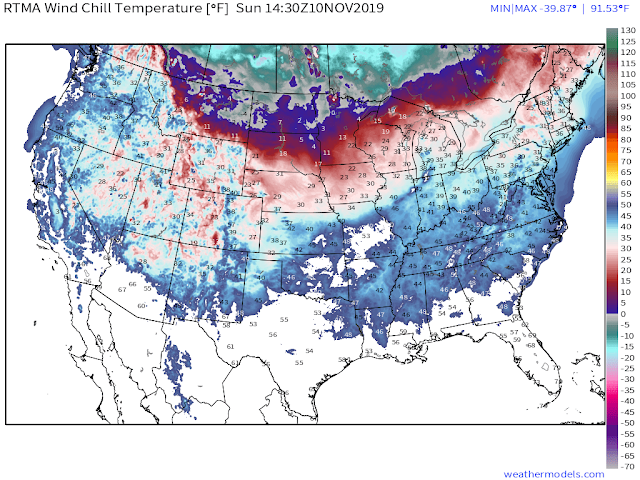 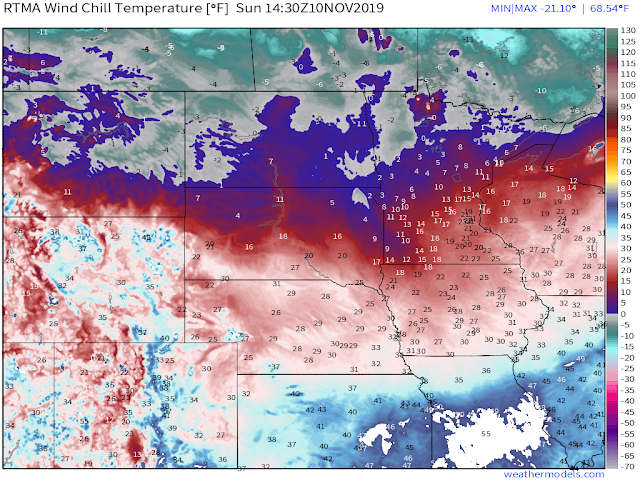 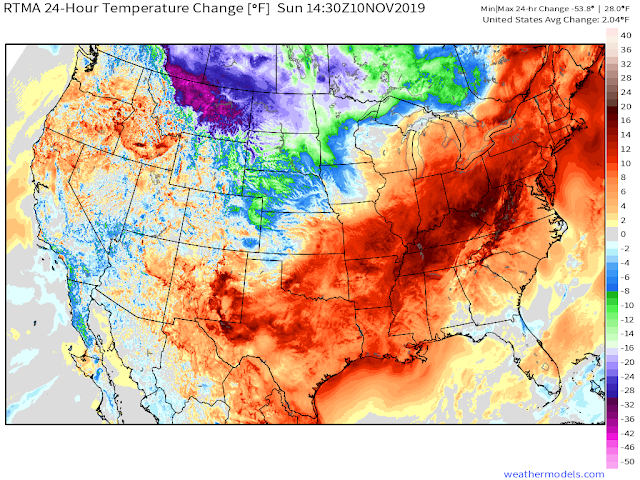 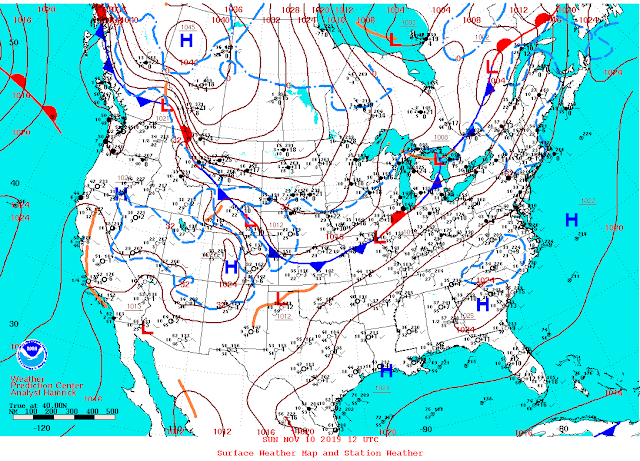 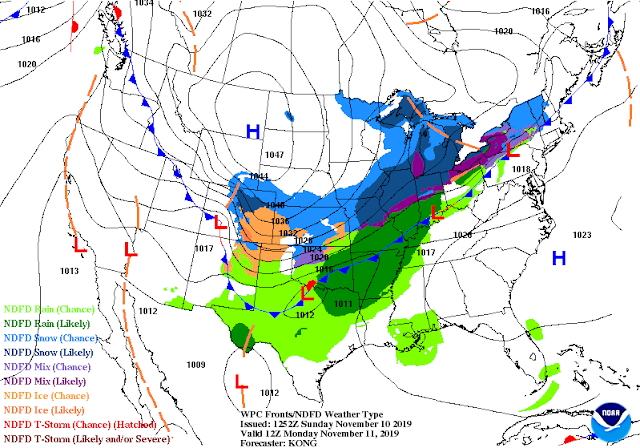 A bitterly cold airmass located across the northern Rockies and northward into southern Canada will work its ways southward today into Monday. This airmass will follow an arctic cold front with its leading edge located in northeastern Colorado at sunrise this morning as it heads south. By sunrise Veteran's Day morning the front is forecast to be entering Southeastern New Mexico and West Texas. 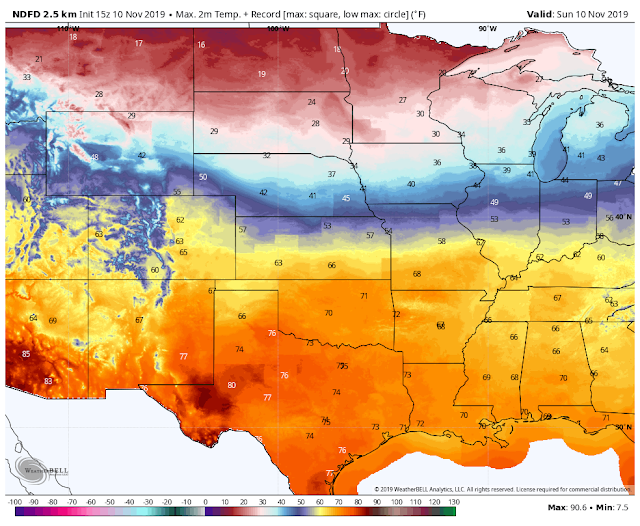 Today (Sunday) will be balmy with afternoon highs in the mid to upper 70's with a few readings close to 80ºF. Although warmer than normal for the date we shouldn't set any new daily record high temperatures today. 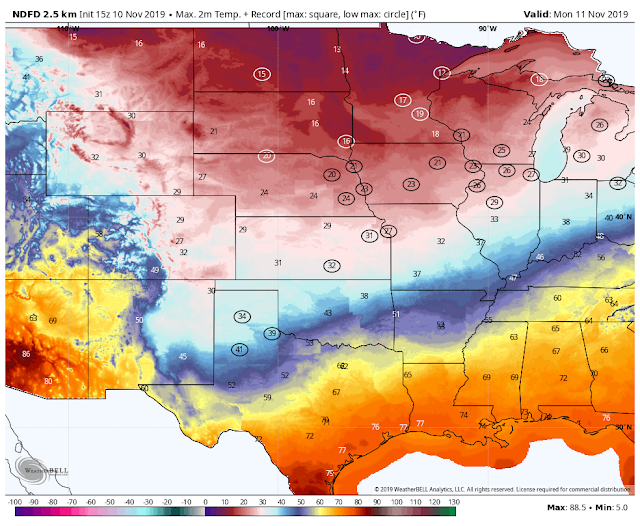 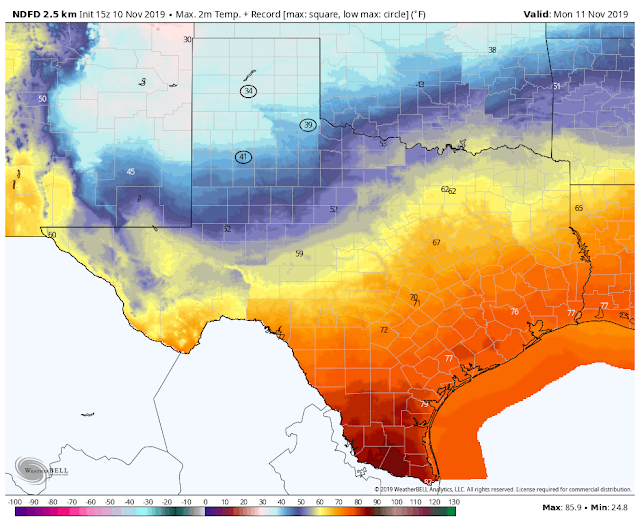 High temperatures on Veterans Day will be tricky for parts of the local area. Depending on how far south and how fast the arctic cold front moves during the day. If it arrives earlier than current forecasts indicate we will be colder locally with highs only in the 30's and 40's. If the front slows down our southern areas (Carlsbad) could end up being warmer. Typically these arctic cold fronts tends to be faster than forecast and more often than not we end up colder than forecast. But not always. 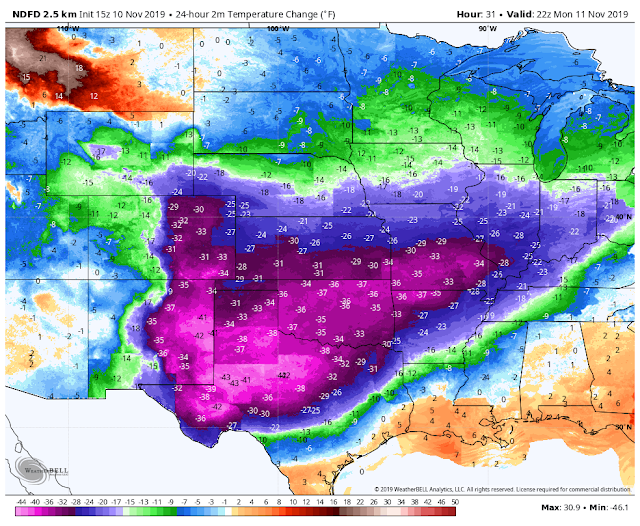 Valid At 5 AM MST Monday.

By sunrise Veterans Day our temperatures are forecast to be at least 35º to 45º colder than this mornings temperatures. This trend will continue during the day with most of the area experiencing their high temperatures early in the morning before the cold front arrives. Gusty northerly winds will certainly make it feel much colder throughout the day with wind chill values in the teens, 20's, and 30's. 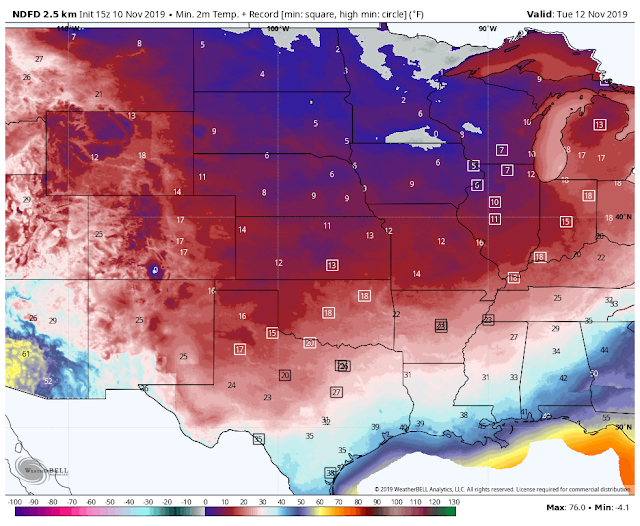 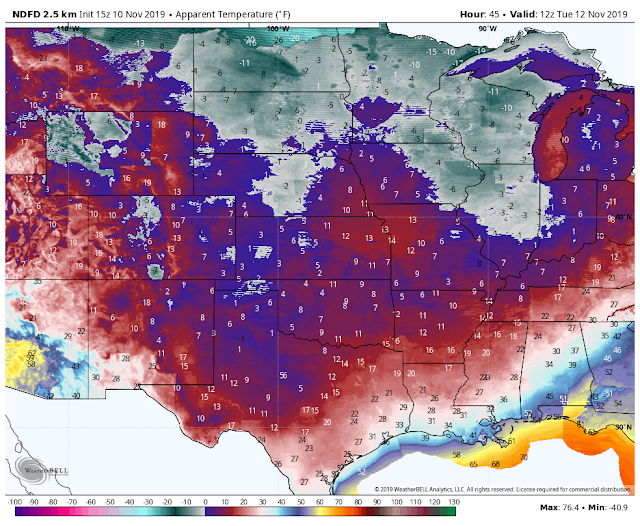 When you combine the temperature, humidity, and wind speed you come up with the "apparent temperature". Locally we will see readings in the single digits and low teens Tuesday morning.

Apparent temperature is the temperature equivalent perceived by humans, caused by the combined effects of air temperature, relative humidity and wind speed. The measure is most commonly applied to the perceived outdoor temperature. However it also applies to indoor temperatures, especially saunas and when houses and workplaces are not sufficiently heated or cooled. 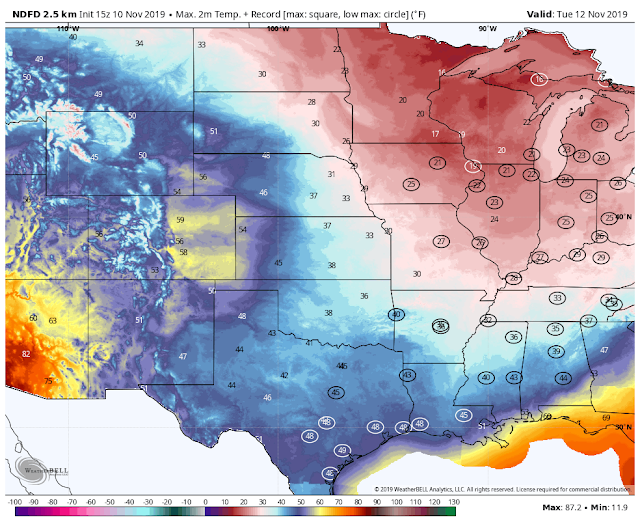 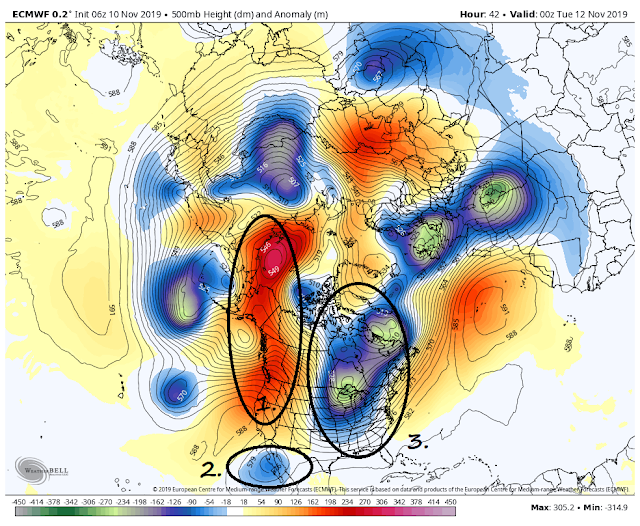 Not only is much colder temperatures on the way but a pesky mid-level low will slide across northern Mexico to our south Monday into Wednesday. This weak storm will combine with the colder airmass and limited surface moisture to produce areas of light snow, light freezing rain, light freezing drizzle, and sleet across the area Monday into Tuesday.

1. A stout ridge of high pressure at the mid-levels (18,000') this fall is helping to send these fast moving short wave troughs of low pressure south into the northern and central U.S. (3.) Occasionally a closed or cutoff mid-level low will sneak under the ridge and slide across the Four Corners area or northern Mexico thus aiding in our wet weather recently. This ridge is also helping drive strong arctic cold fronts south into the area.

As the cold front enters the local area Monday morning a very strong surface pressure gradient will set up over the area. North to northeasterly winds are forecast to become sustained in the Guadalupe Pass area at around 40 to 60 mph with gusts to near 70 mph Monday into Monday night after the frontal passage. 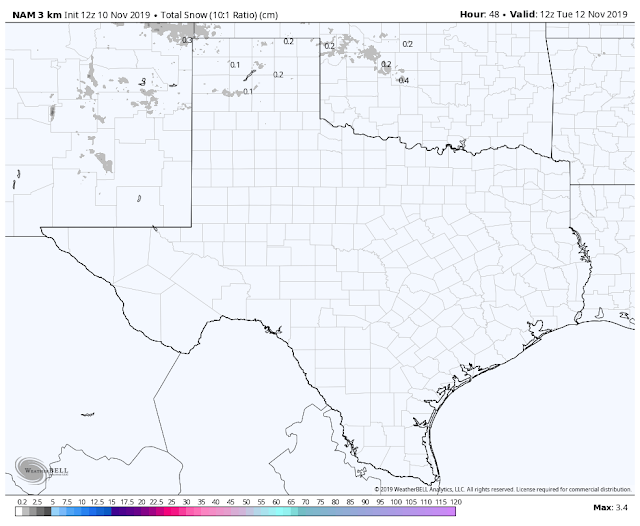 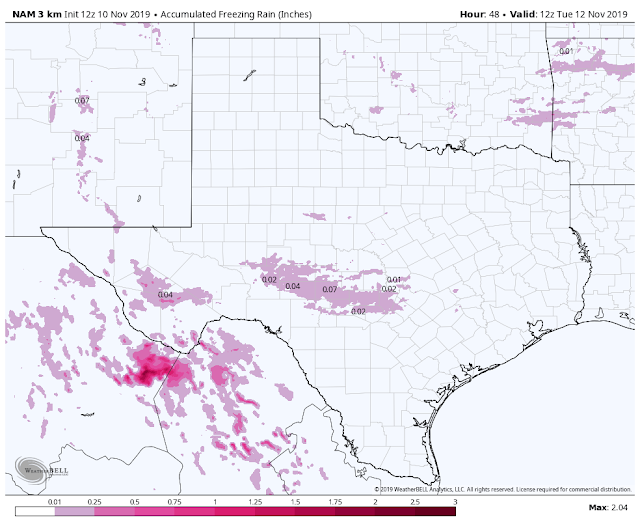 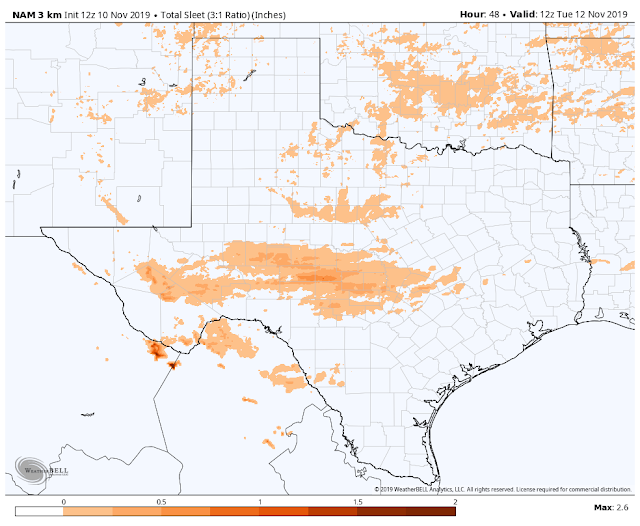 Current forecast models (the NAM 12K being the most pessimistic) are only calling for light amounts of wintry precipitation. However this will cause icing of roads in our area particularly to our north Monday, and locally Monday night into Tuesday. Travel on some our local highways may become dangerous Monday into Tuesday.

Check our latest local forecasts often because there is the chance that our forecasts will change...perhaps for the worst in some areas.