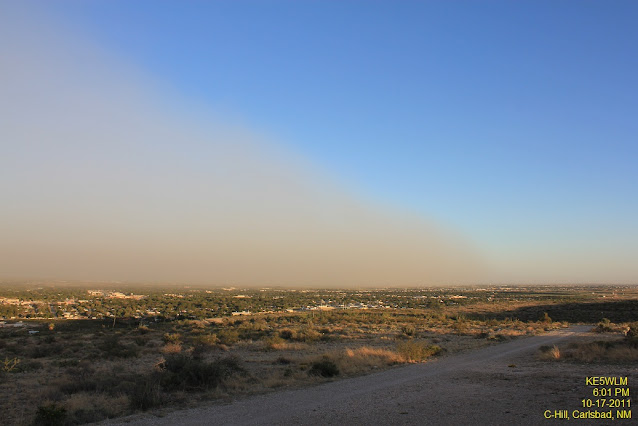 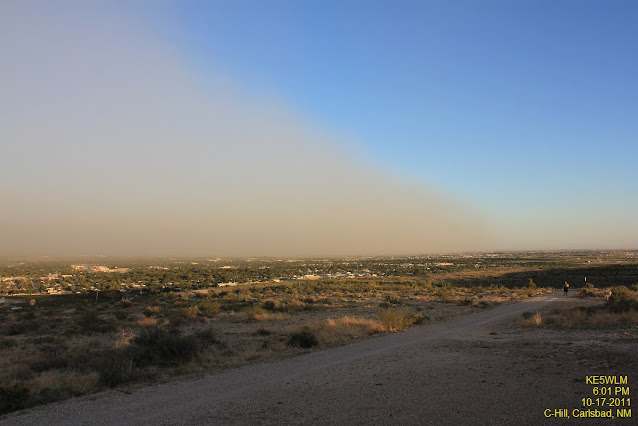 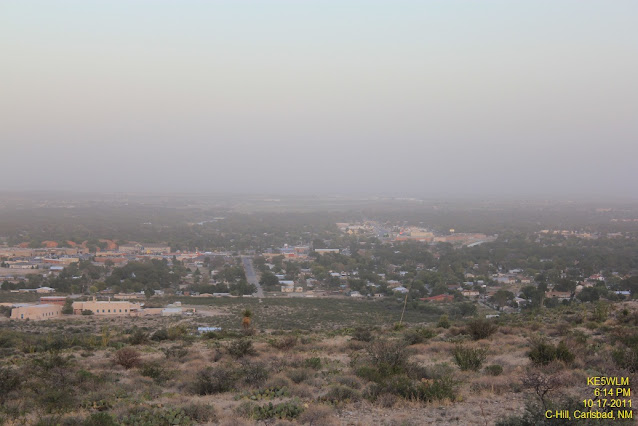 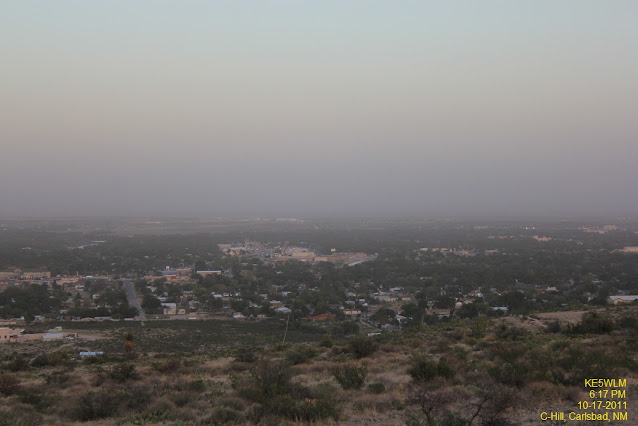 I was on C-Hill looking to the east and southeast when I shot
these photos. 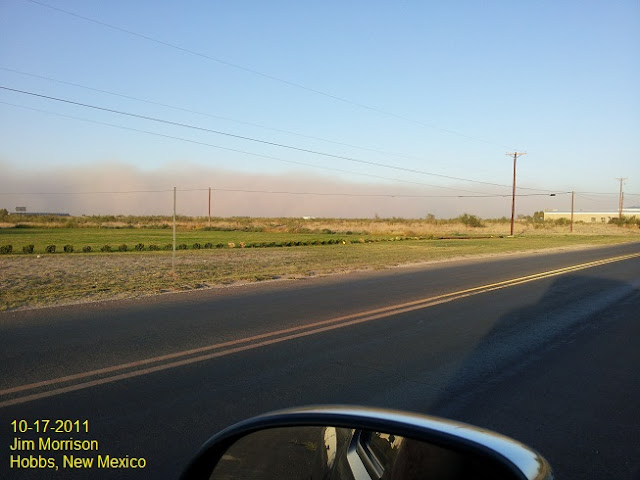 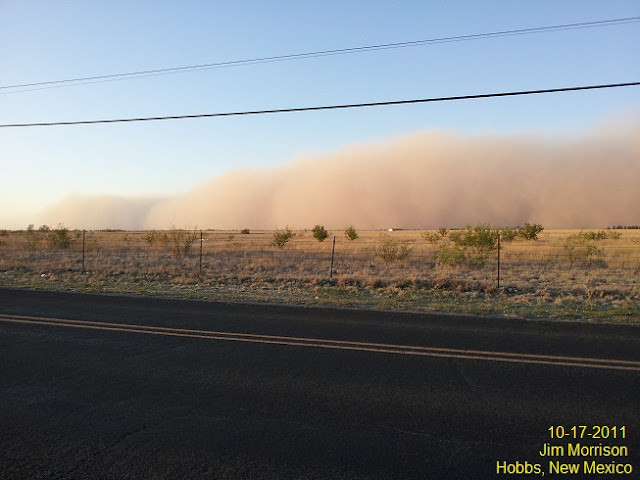 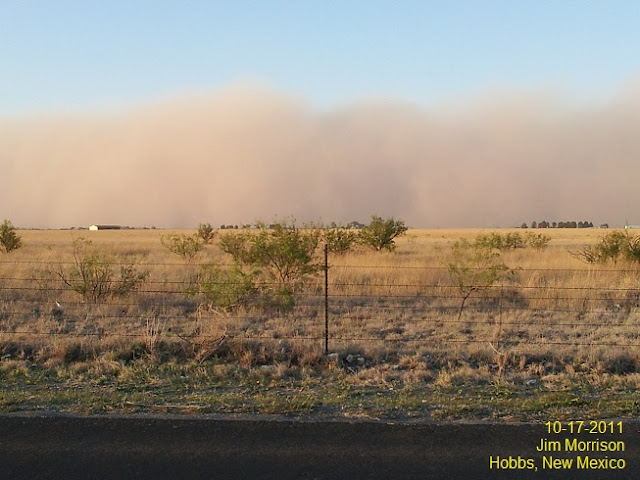 These three photos are courtesy of Jim Morrison (KM5BS)
our Area Skywarn Coordinator for Lea County, NM, and
Gaines County, Texas. Jim lives in Hobbs, and shot these
as the haboob rolled into that area yesterday afternoon. 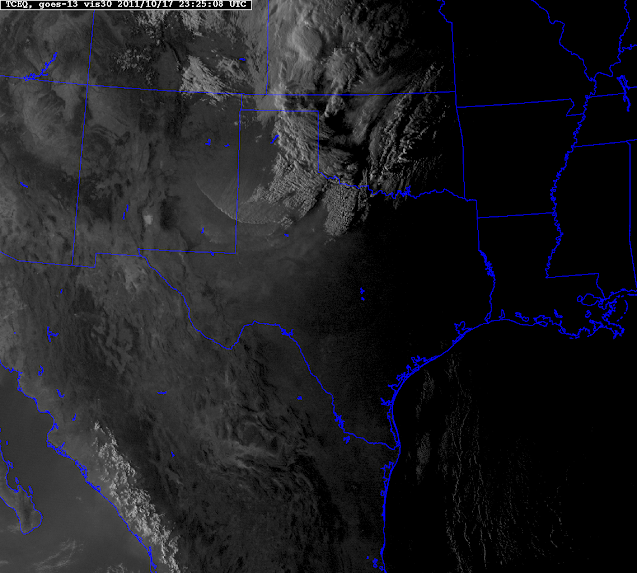 You can easily pick out the blowing dust across E/SE NM
and W TX in this image. Notice how the line of blowing
dust stretches from the northwest to the southeast,
marking the position of the cold front. It also thins
out on its northwestern end.

A large haboob accompanied the strong cold front as it plowed southward down the eastern plains of NM yesterday afternoon and evening. I shot the photos above between 6:01 and 6:17 PM MDT from C-Hill in Carlsbad, New Mexico.

Blowing dust reduced the visibility down to 1/4 - 3/4 of a mile in the Clovis and Portales areas as the front blasted through them. Many areas experienced similar drops in the visibility. By the time the haboob arrived in Carlsbad, the dust had thinned out some, and was not nearly as bad as what had occurred to our north and east.

North to northeasterly winds gusted to 61 mph at the Roswell Airport, 59 mph at the Clovis Municipal Airport, 58 mph at Dora, 55 mph at  Cannon AFB near Clovis, and 54 mph at Tucumcari. Thankfully, our winds here in the Pecos Valley were not nearly that strong with most gusts in the 35 - 45 mph range. Peak wind gusts in the Lubbock, TX area were clocked between 60 - 75 mph. This produced some damage and wild fires from downed power lines.

The Lubbock, Texas and surrounding areas were hit especially hard by the event, which was reminiscent of the Dust Bowl days. With the ongoing historic drought in progress, I am afraid that this was only a precursor of what is to come. Its going to be a long fall-winter-spring.

"Comparison of the famous image taken of a haboob that moved through Stratford, TX during the height of the Dust Bowl on "Black Sunday" in 1935 to the haboob that rolled through the South Plains on "Brown Monday" on October 17, 2011! Notice how eerily similar they are. Quite an ominous sight to say the least!"

For more information, photos, and videos of the haboob that occurred in the Lubbock area yesterday please visit these links.

The Truth Is Stranger Than Fiction!
at Tuesday, October 18, 2011