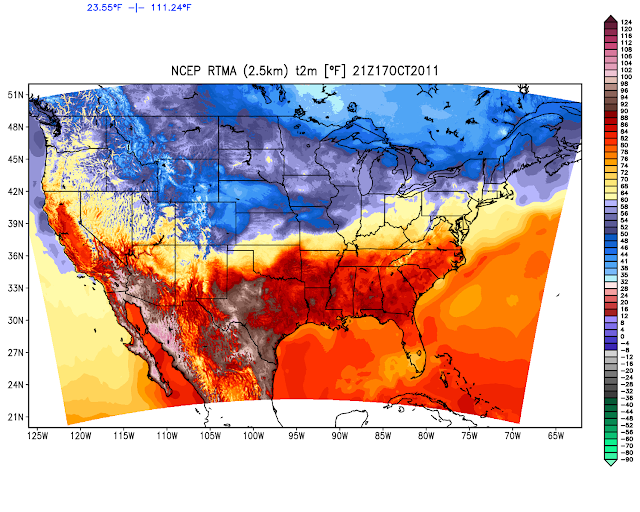 A strong cold front was poised to plow into SE NM at 4:30 PM MDT this afternoon. The front is outlined on the Cannon AFB Doppler Radar snapshot above, as the thin blue line. This is sometimes referred to as a "Fine Line" on radar.

The front was located roughly along a Santa Rosa-Fort Sumner-Portales-Littlefield, TX line at 4 PM MDT this afternoon. As it pushed southward through the Clovis and Portales areas, it produced very strong northerly wind gusts, along with widespread blowing dust. Northerly winds are gusting to 55 mph at the Cannon AFB near Clovis, 59 mph at the Clovis Municipal Airport, and 52 mph at Dora as of 4 PM MDT.

Widespread areas of blowing dust are occurring along and behind the cold front as it pushes southward. Visibilities have dropped down to 1/4 - 3/4 of a mile in the Clovis, and Portales areas within the past hour, as the front moved through there.

The cold front will arrive in the Pecos Valley in another 2 - 4 hours, and when it does you will feel its presence. Our winds will shit around to the north and northeast at sustained speeds of 35 - 45 mph, along with gusts to 50 - 60 mph.

Widespread areas of blowing dust may reduce the visibility in some locations down to less than one mile. Dangerous driving conditions may develop across some local roadways late this afternoon and early this evening due to the high winds and blowing dust.

Temperatures at 4 PM MDT, ranged from 93 in Carlsbad, 91 in Artesia and Roswell, and 90 at Hobbs ahead of the cold front. Behind the cold front, the temperature had already fallen to 72 in Clovis, 70 in Tucumcari, and 59 in Clayton. Falling temperatures will accompany the frontal passage this evening. Most us will only see the mid-upper 60's for highs tomorrow. Our lows tomorrow morning will be in the upper 30's to low 40's. Our lows Wednesday morning will be in the mid-upper 30's.