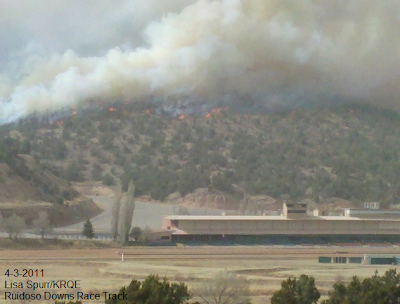 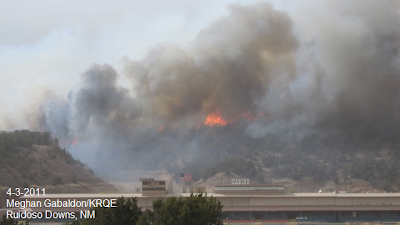 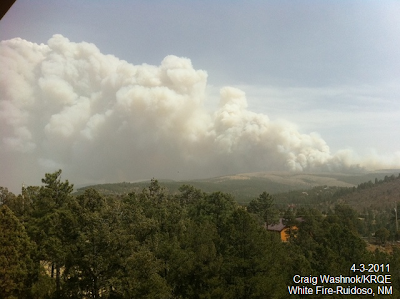 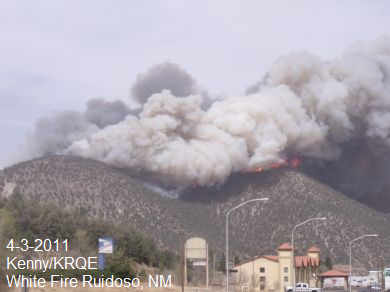 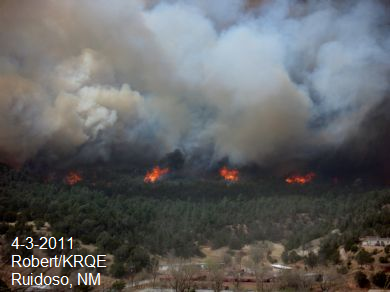 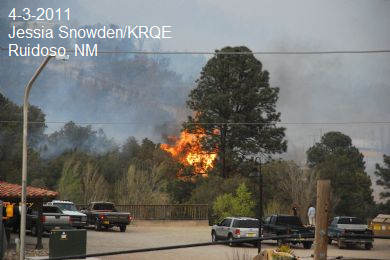 Picture taken near the Magic Forest Restaurant
across from WalMart around 6:45PM. 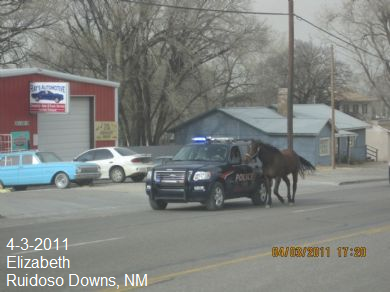 I (Elizabeth) took this picture driving in Ruidoso Downs yesterday.
This is a Ruidoso Downs Police Dept evacuating a horse.
High Winds/Blowing Dust Sunday & The White Fire.
As was feared the worst happened across the state this past weekend. At least 27 fires broke out across New Mexico. The worst of these at least so far has been the White Fire, which broke out around 1:30 PM MDT near Ruidoso Downs. At one point yesterday evening the smoke from this fire showed up on the Cannon AFB Doppler Radar, at about 23,000' Mean Sea Level. Ruidoso is located at 7,000' Mean Sea Level, so the smoke from this fire was rising up at least 16,000' above the ground at one point.
As of 5:00 AM MDT this morning, the fire had burned as estimated 6,000 acres, with 0% containment. Five homes have been lost as well as numerous other buildings. So far no injuries or deaths from this fire have been reported. U.S. Highway 70 and other local roads were shut down last night, and evacuations were ordered north and east of the fire. The fire is reported to be one mile wide and eight miles long this morning.
We are just getting started in this years fire weather season, and we have at least two more months to go before we can possibly get a break from our annual summer monsoon, which normally kicks in around the first couple weeks of July. Until then, there seems to be little hope of much needed rainfall occurring across the local area.
April is the start of our thunderstorm season, and many times the thunderstorms that do occur this time of the year are often dry. Meaning, that they often produce lots of wind (dry microbursts) and lightning, and very little rainfall. This is not good news for us and these storms when they do start firing up across the area, will only aggravate an already dangerous situation due to the ongoing and worsening drought.
A cold front has pushed southward into southeastern New Mexico this morning, and much cooler air is spreading southward behind it. Most of us will see high temperatures today in the upper 60's to near 70. Lows tonight will dip down into the 30's. Some spots may even experience freezing temperatures in the usually colder valley locations and low spots, so cover those plants.
Peak Wind Gusts Reported Sunday-
San Augustin Pass Raws 79 mph
Guadalupe Pass 77 mph
Bowl Raws - N of Guadalupe Pk 69 mph
Sierra Blanca Regional Arpt 63 mph
Dunken Raws 61 mph
Pinery Raws - Pine Springs 60 mph
Smokey Bear Raws - Near Ruidoso 56 mph
Queen Raws 53 mph
Roswell Arpt 51 mph
Carlsbad Arpt 51 mph
Caprock Raws 51 mph
Artesia Arpt 50 mph
2 SW Tatum 50 mph
Sacramento Pk 50 mph
The Truth Is Stranger Than Fiction!