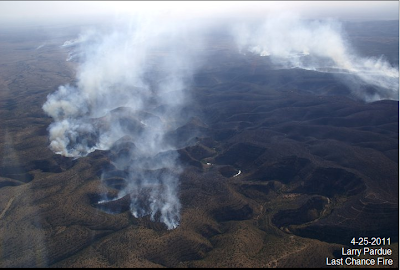 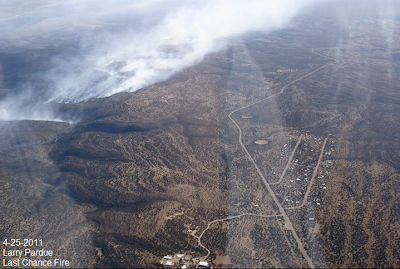 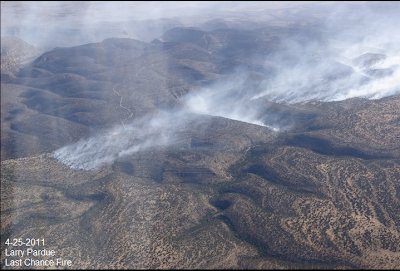 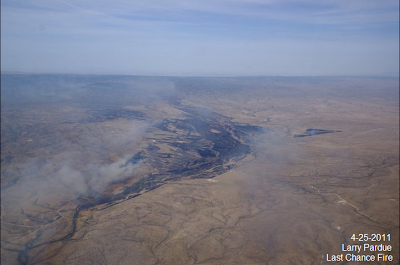 These Photos Of The Last Chance Fire Burning West Of
Carlsbad, NM Are Courtesy Of Larry Pardue (N5LP). He Shot Them
From His Plane Yesterday.
Last Chance Fire.

Snapshot Of The Last Chance Fire
Burning West Of Carlsbad, NM. I
Captured This Image At 9:14 AM MDT
This Morning From The GRLevel3
Integrated Software Radar Package
I Use For Skywarn Operations. The Red
Flames Are Satellite Derived Hot-spot
Images From The Fire. These Hot-spots
May Or May Not Still Be Active.

Close Up View Of The Fire.
Latest Update On The Last Chance Fire-

NEWS RELEASE
For Immediate Release: Last Chance Information – (575) 652-5511
Monday, April 25th, 2011, 8:00 p.m. Team PIOs Jennifer Myslivy or Joel Arnwine
Acres:
39,000 Start Date: April 24th 2011
Cause:
Under Investigation Location: 5 miles west of Queen, NM
Containment:
20% Fuels: Pinon juniper, brush and grass
Terrain:
Steep and Rugged Resources: 6 crews, 16 engines, 1 water tenders
Total personnel:
191 Structures: 6 Structures threatened
Jurisdiction:
USFS, BLM, State and Private
Aircraft:
Air Attack, one Type 1 helicopter, one Type 3 helicopter and 5 air tankers
The increase in acreage was the result of a flight this morning that provided more accurate information on fire size and activity.
A Red Flag Warning will continue to be in effect through Tuesday and into the early morning hours of Wednesday; erratic winds and low relative humidity’s hampered fire suppression activities today. Multiple air tankers provided support around the Queen Administrative site during the afternoon when the fire flared up. Due to the flare up, 6 structures on the outskirts of the Queen subdivision was threatened but crews closely monitored the threat.
Summary:
Crews continued to work aggressively to secure the fire perimeter by conducting burn out operations on different section of the fire. Last night’s burnout operations were very successful and helped secure the fire perimeter on Division D which is off the Sitting Bull Falls Road. The following road closures are still in effect:
- HWY137 at 408 (Dark Canyon Road) – State Police blockade
- Dark Canyon Road at Hidalgo Road
Also, the Sitting Bull Falls recreation area is closed to the public due the fire activity in and around the area.
A public meeting was held this evening at the Queen Fire Department with approximately 25 residences in attendance. The Incident Commander informed the residences of today’s fire activities and explained what will be happening in the coming days.
The Carlsbad School District WILL NOT run the bus route from Marathon Road up to Queen tomorrow, so please contact the School Administration Office to let them know if kids are unable to make it to school.
Smoke from the fire will continue to impacted the community of Carlsbad and surrounding areas so please take precautious if you have any health or respiratory issues. For more information, NMED’s website, http://www.nmenv.state.nm.us/aqb/Wildfire-PM.html, the DOH websitehttp://www.health.state.nm.us/.
-------------------------------------------------------------------------------------
I am not sure about the time on the latest update on the Last Chance Fire that continues to burn west of Carlsbad this morning.The New Mexico Fire Information Web Pages last update says 8 AM yesterday.
Anyway, the latest info from that web page states that the fire had burned an estimated 23, 793 acres as of yesterday. It was only 20% contained. 200 personnel are fighting the fire. Three structures were threatened with two of them evacuated. Unconfirmed reports from the Carlsbad Current Argus this morning are indicating that the Sitting Bull Falls Recreational Area may have been damaged by the fire. Westerly winds gusted up to around 55 mph yesterday afternoon impeding the progress of the firefighters somewhat.
Yesterday morning the Martin Fire broke out south of Lovington in Lea County. It reportedly quickly grew to an estimated 25,000 acres, and was three miles wide and seventeen miles long. Several local highways were shut down for a time including Hwy 18. Firefighters were able to stop the forward progress of the fire late yesterday afternoon.
Potentially Damaging High Wind Event! 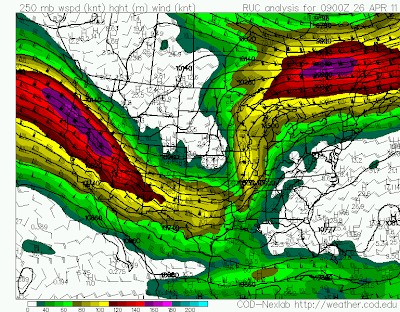 An Unusually Strong Jet Stream For So Late In The Season
Is Forecast To Plow Overhead Across NM Today. Winds At
The 250 MB/34,000' MSL Are Forecast To Be Around 161
Knots Or 185 MPH. These Winds Will Mix Downward To
The Surface Later This Morning And Help To Produce
The Very High Winds Forecast The State Later Today..
Map Is Courtesy Of The College of DuPage.
As if things were not bad enough, they will quickly get much worse today! A High Wind Warning is in effect today for most of SE NM. Westerly winds will quickly increase later this morning to sustained speeds of around 35-45 mph with gusts of around 60-65 mph across much of the local area. Localized higher gusts will be possible in the normally more wind prone areas, especially near the foothills and mountains.
Some property damage to homes, barns, sheds, and other buildings may occur from these winds today into this evening. Power lines and other suspended cables and lines may be blown down today. High profile as well as low profile vehicles will be subject to dangerous cross winds on north-south facing highways and may be blown off area roadways in the stronger gusts. Westerly winds are forecast to be sustained at around 40-55 mph with gusts in the neighborhood of 75 mph across the Guadalupe Mountains today.
Widespread Blowing Dust!
Widespread areas of blowing dust are likely today across most of the area. Sudden drops in the visibility down to near zero with little to no advanced warning will be possible in the normally more dust prone locations such as freshly plowed farmlands, open fields and lots, and construction sites. Smoke from local fires may combine with the blowing dust to limit the visibility on some local roadways later today.
Potentially Life & Property Threatening Fire Weather Event Today!
With two wildfires already in progress across SE NM the last thing we need is more of them. Sadly there is the potential for additional fires across the area today. An Extremely Critically Dangerous Fire Weather Situation will be in place across all of the area today, with the potential for large wind driven fires that may affect life and property! Please refrain from any type of outdoor activity that involves sparks or flames! Do not drive your vehicles off paved or maintained roadways, and please do not toss your cigarettes out of you vehicles. Please stay abreast of all of our local weather conditions and forecasts today into this evening, and be prepared to quickly evacuate your location should a wildfire threaten your area if local authorities call for such measures.
The Truth Is Stranger Than Fiction!
at Tuesday, April 26, 2011