A Day Of Devastation As The Death Toll Continues To Climb!
Updated Thursday April 28, 2011 1:30 PM MDT-
As the day broke across the Southern US this morning, it was very evident that today's news was not going to be good. It is not, and it gets worse by the hour. According to the major news outlets: Fox News, CNN News, and Yahoo Headline News, the dead toll from yesterday's deadly tornado outbreak stands at around 271 as of 1:30 PM MDT. Hundreds more have been injured. Many people are still missing.The count goes up by the hour, and I am just sickened by all of the death and destruction.
There is little doubt that what we are witnessing is nothing short of historic. Preliminary reports indicate that there were 150 tornadoes that touched down yesterday. Its way too early to know the exact count, and this number may go up or down as the Damage Assessment Teams go to work trying to sort the details out. It will be awhile before the exact number is known.
There were several large violent wedge tornadoes reported, some of these may have been long track tornadoes that stayed on the ground for miles. Its possible that the tornado that ripped through Tuscaloosa, Alabama and then into Birmingham, could have been on the ground for some 300 miles. If this is true, it will be a new US record. The supercell thunderstorm that produced this tornado did track across four states for three hundred miles. So far this April there have been over 600 tornadoes reported across the nation, this will likely set new records as well. A very sad day to remember in American history for sure.
Here are a few Historical Tornado Facts-
(Courtesy of Weather Bells Joseph D'Aleo)
Epic Tornado Outbreak ends today with focus near East Coast
"Clearly though this week’s onslaught will rank among the most significant outbreaks in history  Sadly the death toll this morning stood at over 200 and climbing. The death toll from these tornadoes is not unprecedented. The Tri-State tornado of March 18th, 1925 killed 695 people, 234 in the town of Murphysboro alone. Total deaths from tornadoes in 1925 were 800. In 1974, 319 people died from tornadoes, all in one day, April the 3rd. In 1965, 300 died. In 1953, 530 people died from tornadoes in the United States. In 1936, 550 people were killed by tornadoes. In 1927, 540 were killed by tornadoes. In 1917, 550 people were killed by tornadoes. In 1896, 530 Americans were killed by tornadoes." 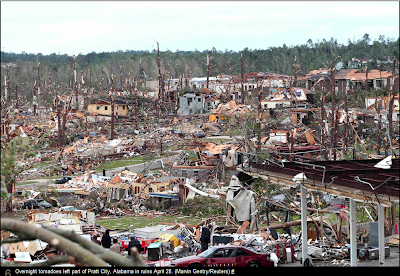 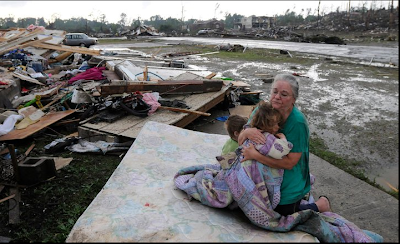 Faye Hyde, right, sits on a mattress in what was her yard as she comforts her granddaughter Sierra Goldsmith, 2, in Conord Ala. Wednesday, April 27, 2011. Their home was completely destroyed. (AP Photo/The Birmingham News, Jeff Roberts).
FoxNews.
Click On The Image To Enlarge It.

I Captured This GRLevel2-AE Integrated Software Image Off Of
The Birmingham, Alabama Radar This Afternoon.
This Is Tuscaloosa, Alabama.
The Top Left Hand Image Is The Base Reflectivity Snapshot.
It Shows The Very Well Defined Hook Echo And Debris Ball.
The Red Triangle Is The Tornado Vortex Signature (TVS).
The Debris Ball Extended Up At Least 8,000' Into
The Air. This Means That The Radar Beam Was Bouncing
Off Of Solid Objects That Were Being Carried This High Up.

These Two (BV/SRV) Depict The Wind Field Structure Within
The Supercell Thunderstorm. The Greens Represent The Winds
That Are Moving Towards The Radar.The Reds Represents
The Winds That Are Moving Away From The Radar. Where They
Meet In Such A Tight Couplet Is Where Tornadoes Are Likely.

The Bottom Right Image Is The Normalized Rotation (NORT)
Image. It Is Another Way Of Determining Just How Tight/Storng
The Rotation Couplet Is. This NORT Was 2.67, The Strongest
NORT I Have Yet Seen On GRLevel2-AE.

It Is Incredibly Rare That A Doppler Radar Can Actually See
A Tornado. They Detect The Rotation Within The Thunderstorm.
A Tornado Has To Be Close To The Radar And Really Big
In Order For The Radar To Actually See It. Or As In This Case
Slinging Large Amounts Of Debris Into The Air.

The Tornado Outbreak Today May Go Down As The
Worst In The History Of The Country. It May Exceed
The Super Outbreak in April 1974. I Have Never Seen
So Many Tornado Warnings, Debris Balls, And Tight/Strong
SRV Signatures. The SRV Couplets Were Just Off
The Scale With Some Of These Tornadoes. Some Gate To
Gate Shear Couplets Exceeded 175 Knots.

Many Towns And Communities Across Alabama And
Nearby States Have Been Severely Damaged Or Destroyed.
This Will Outbreak I Fear Will Be Historic.