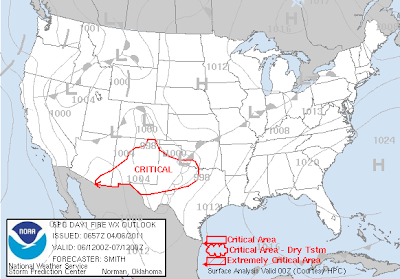 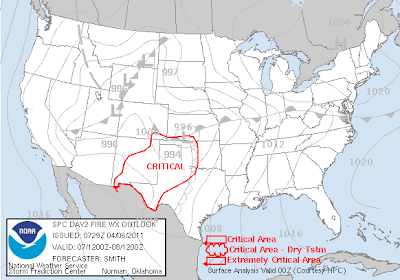 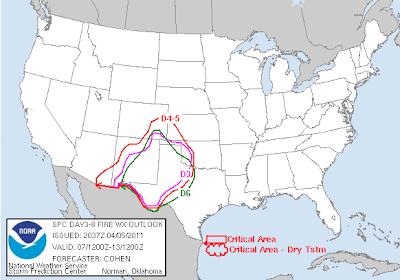 Critically Dangerous Fire Weather Conditions Friday-Saturday!
Critically Dangerous Fire Weather Conditions Expected Into The Weekend!
Our typical spring windy season usually begins around the end of February, and can last until the 4th of July. In some years March is the windiest month, in others it is April, this year it appears that April will turn out to be our windiest month. I love living in New Mexico but I hate our spring winds with a passion!
A very active jet stream continues to send one storm after another into the state every four to five days or so. There does not appear to be a break in this pattern so we can expect more of what we already have. And this would be hot, extremely dry, and windy weather, with little hope of meaningful rainfall across the area.
Click On The Maps To Enlarge Them. 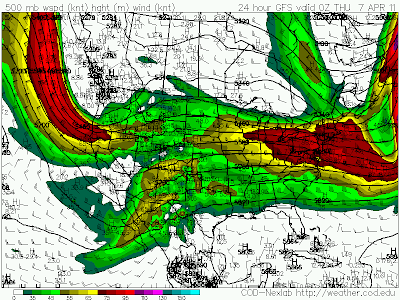 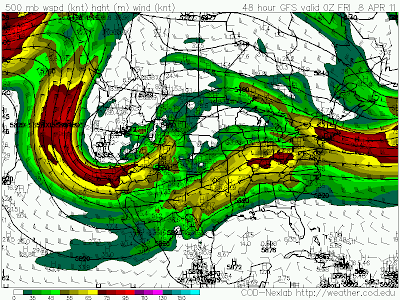 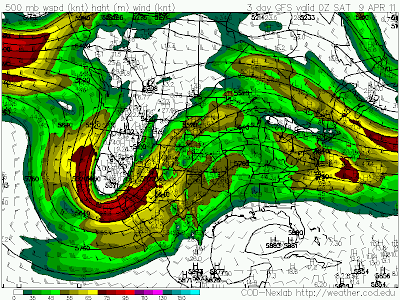 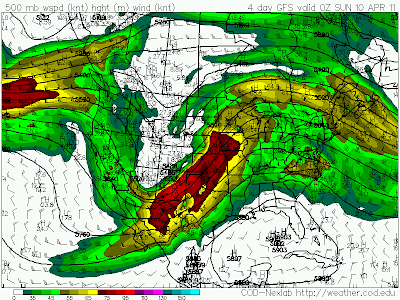 Last Nights 00Z/6PM MDT GFS 500 MB/18,000' MSL
Forecast Map Valid At 6 PM Saturday.
A large, and strong mid-upper level storm, will dig southward into southern California today and tomorrow, and then move slowly eastward towards the state by Friday. This storm will then sweep across the state late this weekend.
Southwesterly winds aloft will strengthen each day as the strong mid-upper level storm approaches. These strong winds will then mix down to the surface, and combined with an increasingly tight surface pressure gradient, will make for a windy 4-5 days across the area. The windiest day appears to be Saturday when the jet stream, and very strong mid-level winds aloft, will be directly overhead.
We will see southwesterly winds increase across the area today, and even more so on Thursday and Friday. These winds will increase to sustained speeds of around 25 mph this afternoon with gusts to around 35 mph. They will strengthen to sustained speeds of around 30 mph tomorrow and Friday with gusts to around 40-45 mph. Locally higher gusts may occur, especially near and over the mountains.
A High Wind Warning continues in effect for the Guadalupe Mountains through Thursday evening. Southwesterly winds sustained of around 35-45mph with gusts near 65 mph are forecast today. These winds will increase to sustained speeds of around 40-50 mph with gusts over 70 mph on Thursday.
Red Flag Warnings continue in effect for the area today. A Fire Weather Watch is in effect for Thursday. Critically Dangerous Fire Weather Conditions are in place across all of southeastern New Mexico, and these conditions will worsen tomorrow into the weekend. We will likely experience Red Flag Warnings daily into the weekend. I would not be surprised to see experience Extremely Critically Dangerous Fire Weather Conditions over the area between now and the weekend.
Update on the "White Fire"- As of 8 PM MDT last night, the "White Fire" was still burning north of Ruidoso Downs. It was 35% contained and so far has burned 10, 341 acres. Five homes have been lost, as well as numerous other outbuildings. 490 people are working to put the fire out. Southwest-west winds are forecast to gust up to around 40 mph in the Ruidoso area today into Friday, and this may hinder fire fighting efforts to extinguish the fire.
The Truth Is Stranger Than Fiction!
Email Post