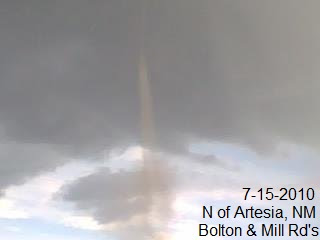 Landspout Tornado
Photo Sent To Me By Carrie Greenwood Of Artesia, NM

Yesterday was just downright hot and humid. High temperatures across SE NM for the most part were in the mid 90's. Combine these temperatures with dew point temperatures in the low-mid 70's (you won't see this very often around here), or relative humidity values around 40%-50%, and you come up with heat index values of 105-110. We are not used to this kind of heat and humidity, and unfortunately it is forecast to continue into the weekend.
Around 4 PM yesterday afternoon, a thunderstorm rapidly developed near Artesia. This thunderstorm then quickly became severe. Eddy County Skywarn Spotters reported a landspout tornado just north of town at 4:50 PM. This weaker version of a tornado, formed near Compress and Mill roads, drifted to the south for a couple of minutes, and then dissipated. According to the spotters who witnessed it, it never connected to the base of the thunderstorm. To my knowledge it did not damage anything.
"Landspout - [Slang], a tornado that does not arise from organized storm-scale rotation and therefore is not associated with a wall cloud (visually) or a mesocyclone (on radar). Landspouts typically are observed beneath Cbs or towering cumulus clouds (often as no more than a dust whirl), and essentially are the land-based equivalents of waterspouts."
Landspout tornadoes are usually weak, and most of the time do not produce significant damage. They first form at the ground level where they are the widest, then they become skinnier as they are stretched upward by the updraft, towards the base of a cumulus cloud, or a thunderstorm. They usually only last for a couple of minutes, and most of the time fail to reach the base of a thunderstorm. They are not your classic tornado produced by a supercell thunderstorm. They are more like a waterspout that forms over land.
This event caused a great deal of excitement in Artesia yesterday afternoon. I was in contact with Eddy County Emergency Manager Joel Arnwine, and Eddy County Fire Marshall Robert Brader during this event. I also went live on KSVP/KTZA Radio in Artesia with Gene Dow, and we talked about the situation. I received the spotter reports after the landspout had dissipated.
The core of the parent thunderstorm that produced the landspout tornado was located just to the north of Artesia, and was moving northwest and away from Artesia at around 4:50 PM. Golf ball size hail was reported by the Artesia Fire Department Assistant Fire Chief, on State Hwy 2 (the Lake Arthur Highway) three miles north of Artesia at 5:05 PM.
I made the decision not to recommend that the sirens in Artesia be sounded due to the nature, location, timing, and direction of movement of the landspout, and it's parent thunderstorm. It was weak, and quickly formed and dissipated, and touched down in open country, and not in a populated area. The Midland/Odessa National Weather Service Doppler Radar indicated only weak rotation within the thunderstorm at the time of the landspout.
The factors above, and the fact that the main core of the severe thunderstorm was already north of Artesia, and was moving to the northwest away from the city, and no spotter reports at the time that the landspout formed, led to my decision not to sound the sirens. The city of Artesia was never really in any serious danger of being hit from this landspout, even though it formed just north of Navajo Refinery.
The Midland/Odessa National Weather Service Office issued two severe thunderstorm warnings, and a flood advisory, for central and northern Eddy County during this event. I didn't get the spotter reports of the landspout until nearly an hour after it's occurrence.
A couple more severe thunderstorms developed near Lakewood and drifted to the northwest towards Artesia, but dissipated before reaching town. A second severe thunderstorm produced quarter to golf ball size hail one mile north of the NM/TX State line, along US Hwy 62/180, seventeen miles north of Pine Springs at 7:15 PM.
Please click on the NWS Watch/Warning map above for all of the latest NWS Advisories, Watches, Warnings, and Special Weather Statements for our local area.
at Friday, July 16, 2010