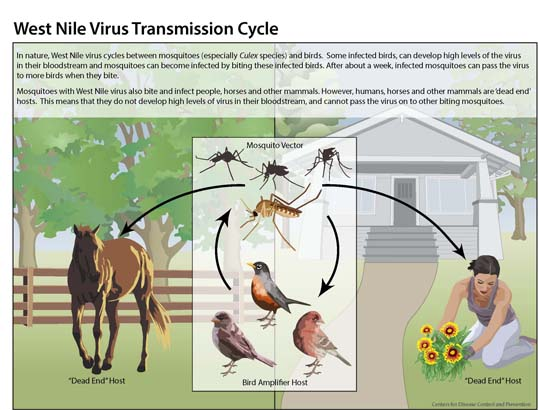 How The Disease Is Transmitted.

Residents urged to take precautions through the end of mosquito season
(Carlsbad) The New Mexico Department of Health and the Eddy County Emergency Operations Center announced today that West Nile virus positive mosquitoes were collected from Eddy County following the recent flooding in the area. The mosquitoes were collected by Department of Health personnel and were lab confirmed for West Nile virus.
“In light of flooding throughout the county, and this recent detection of West Nile virus infected mosquitoes, we are making every effort to inform the public on how to avoid the risk of contracting the virus,” said Kelly Cox, Eddy County Vector Control Supervisor. “With the widespread flooding, and the large amounts of standing water, citizens need to take precautions to protect themselves from mosquito bites.”
Eddy County Vector Control and vector control personnel from the City of Albuquerque Environmental Health Department and Bernalillo County Office of Health and Social Services who were brought in to help with emergency response have been spraying for mosquitoes. “Even with consistent treatment efforts, mosquito populations are going to remain higher than normal until the first frost,” states Kelly Cox, Eddy County Vector Control Supervisor. “Citizens have to take steps on their own to protect themselves from mosquito bites.”
Common West Nile virus symptoms are fever, nausea, headache, and muscle aches. In rare cases, West Nile virus can cause meningitis or encephalitis. If someone has these symptoms, they should see their health care provider. People older than 60 are at most risk for serious disease from West Nile virus.
Reduce the risk of contracting West Nile by minimizing exposure to mosquitoes:
_Use insect repellent on exposed skin and clothing when you go outdoors. The Centers for Disease Control and Prevention recommends repellents containing DEET, Picaridin, oil of lemon eucalyptus, or IR3535 for use on skin, and permethrin for use on clothing. Always follow label directions when using insect repellents.
Wear long pants and long-sleeved shirts when active outdoors.
If possible, avoid outdoor activities at dawn and dusk during peak mosquito activity.
Keep windows and doors closed if not screened. If you leave your house doors or windows open, make sure they have screens that fit tightly and have no holes.

For more information about West Nile Virus go to the Center for Disease Control Website at:
http://www.cdc.gov/westnile/index.html
Or the New Mexico Department of Health at: