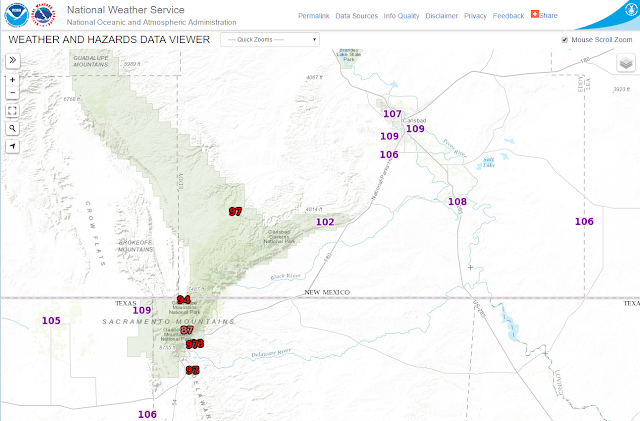 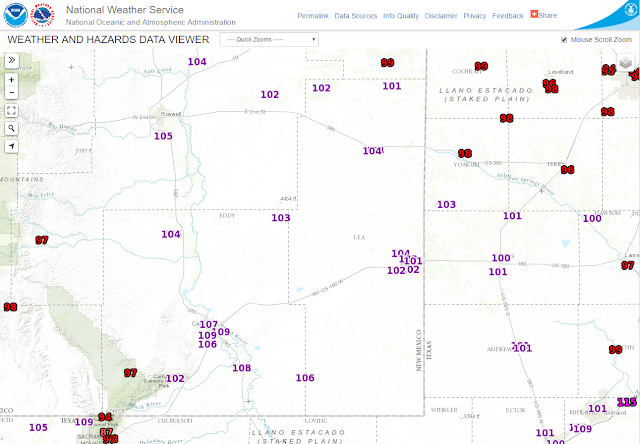 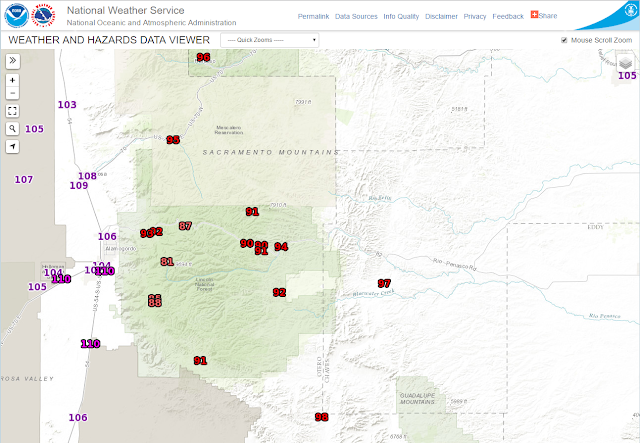 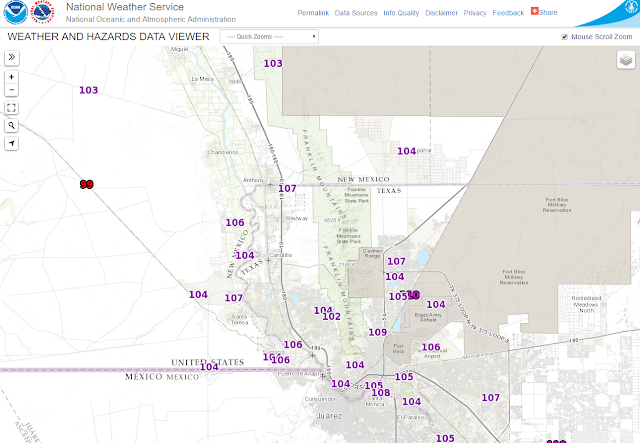 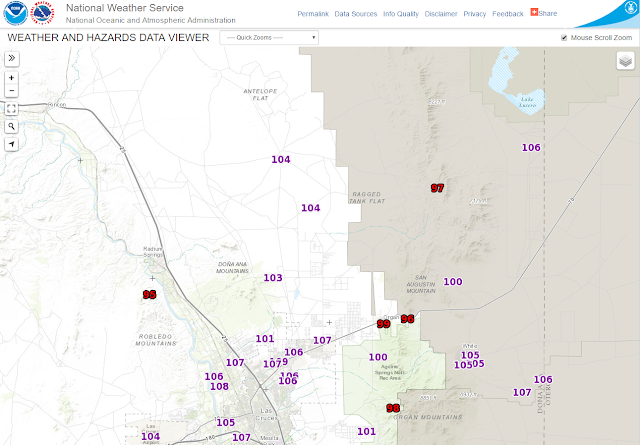 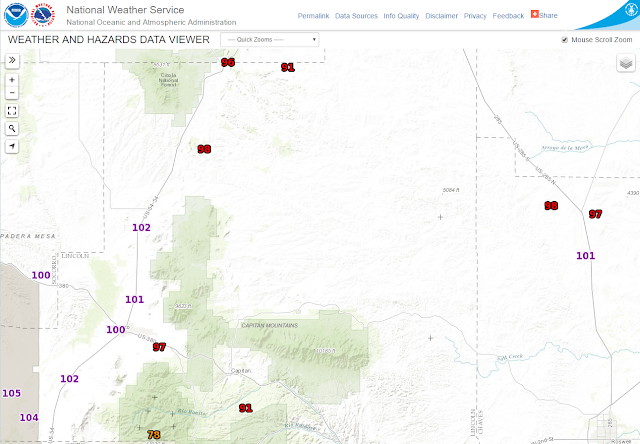 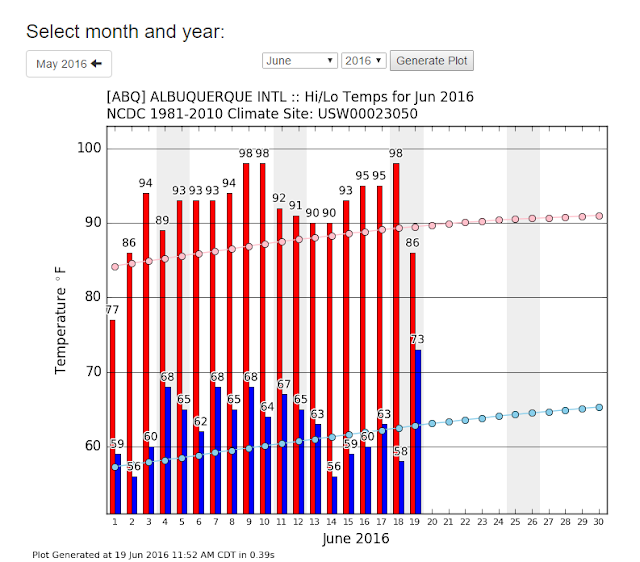 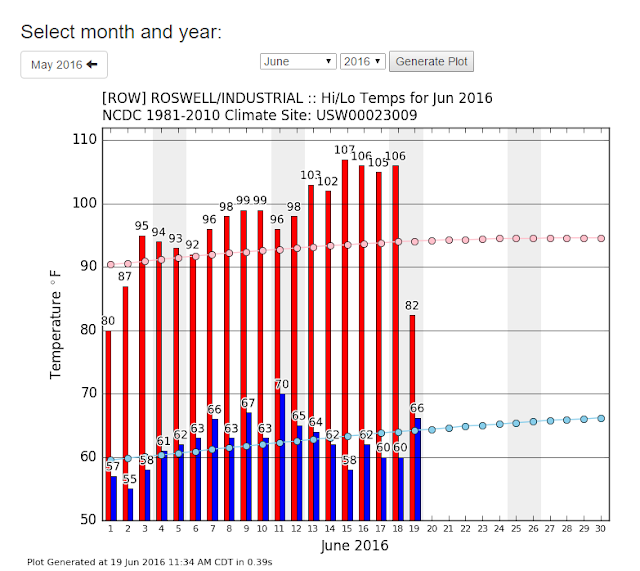 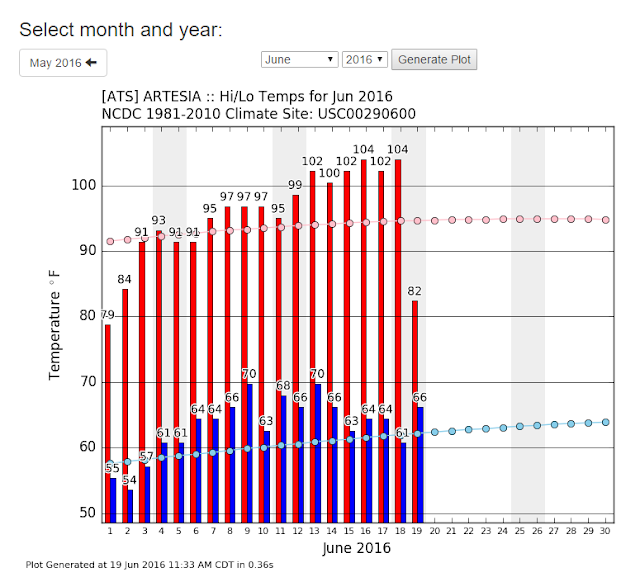 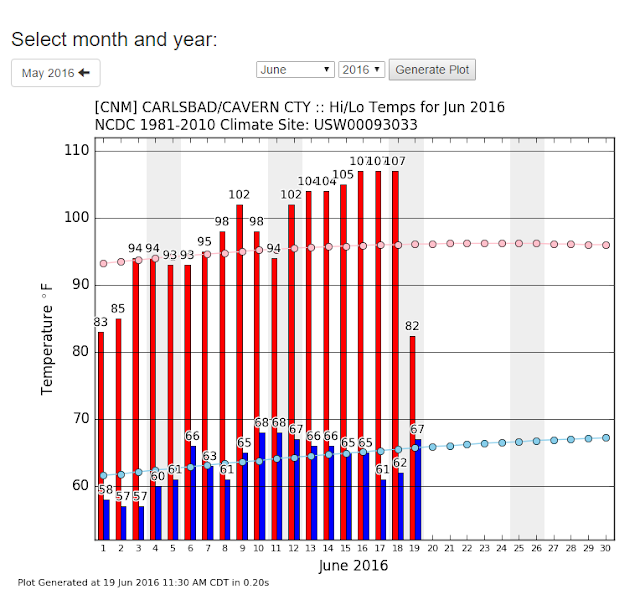 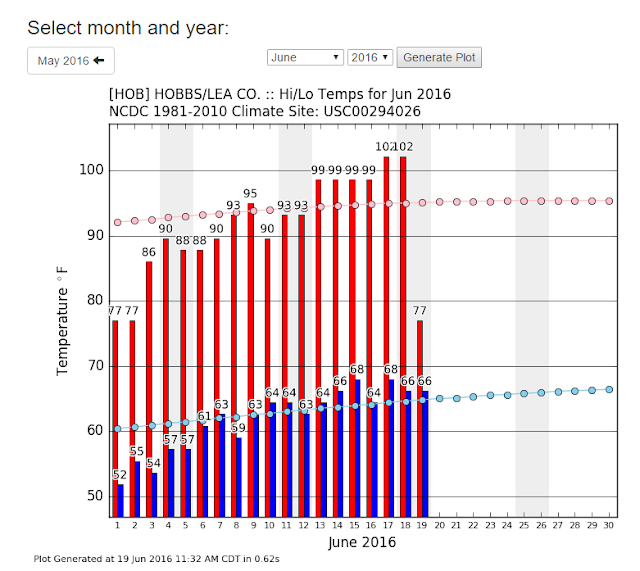 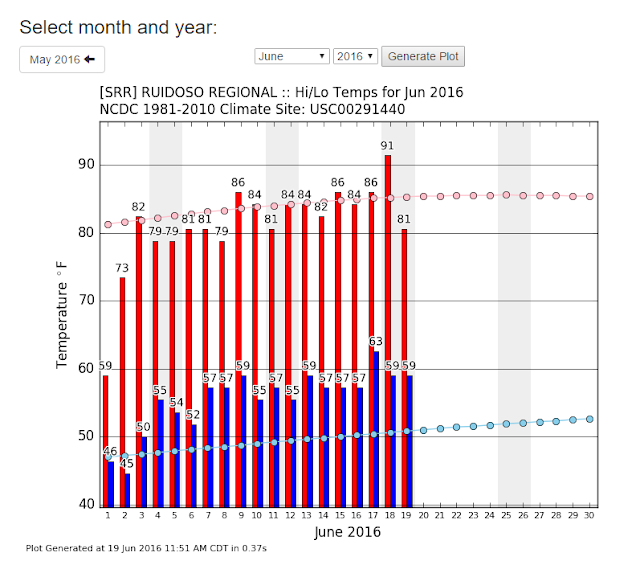 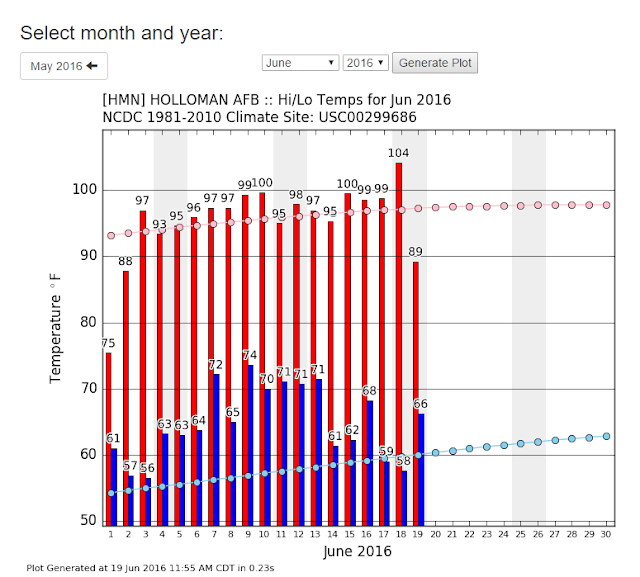 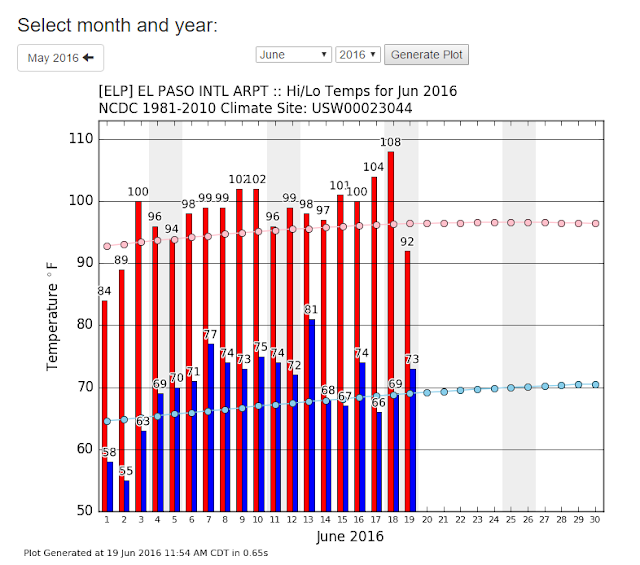 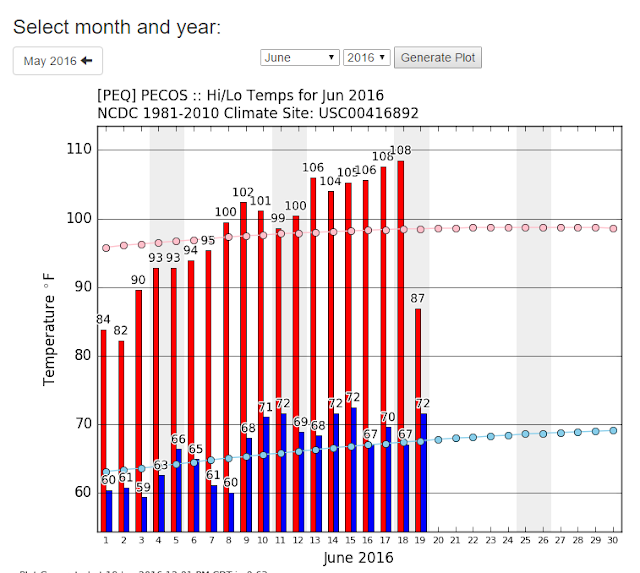 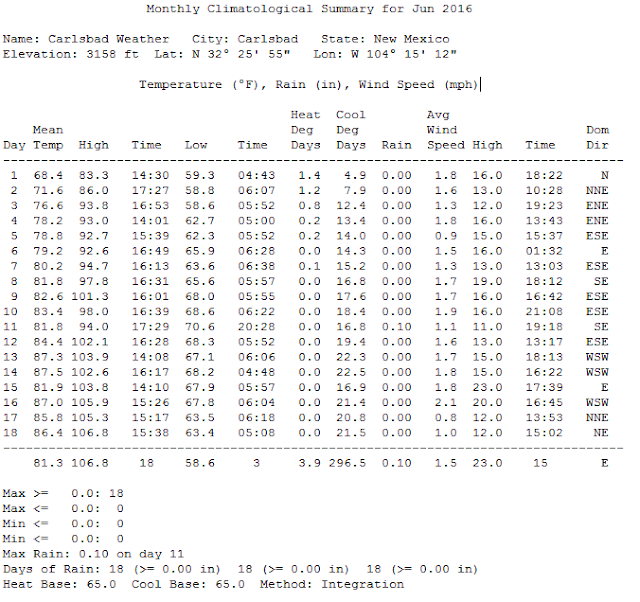 Yesterday (Saturday, June 18, 2016) was one of the hottest if not the hottest day of the year for many of us in southern and southeastern New Mexico. The Carlsbad Climate Co-Op Station registered a high temp of 108ºF making this their hottest reading of the summer so far.

The Smokey Bear Raws located near Ruidoso at an elevation of 7,090' reported a high temp of 96ºF yesterday. The Sierra Blanca Regional Airport reported 91ºF. 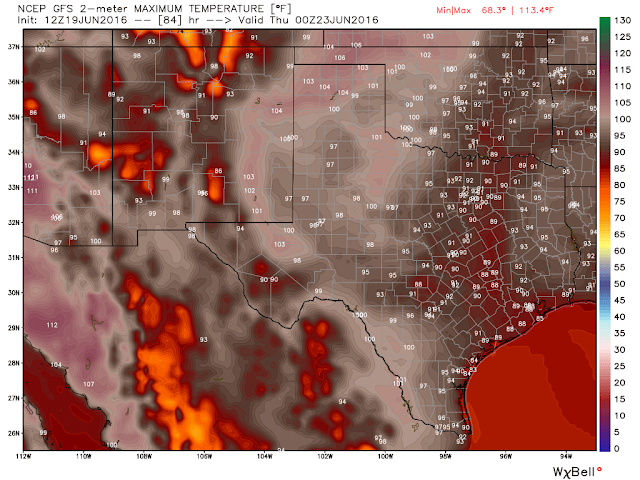 We will get somewhat of a break over the next few days but by Wednesday it appears that our triple digit temps will be back and stay into the upcoming end of the week.

Death Valley/Furnace Creek Lives Up To Its Repatation This Week. 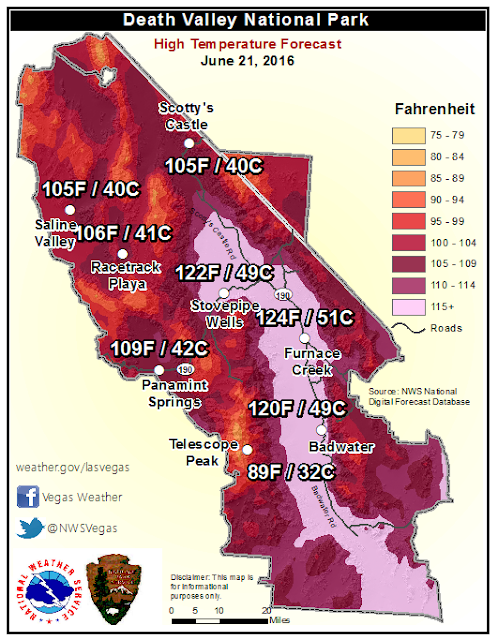 Current National Weather Service forecasts for Death Valley still are calling for a high temp of 124ºF this coming Tuesday. That's a ways from their all-time record high of 134ºF established there on July 10, 1913. Check out this really interesting video and article concerning the worlds highest reported temperature of 136ºF in Aziziya, Libya  now disqualified as so, verses Death Valley's reading of 134ºF.

What Is The Highest Temperature Officially Recorded?

A world map showing areas with Köppen BWh(hot desert climate). The temperatures in these regions have the potential to exceed 50 °C (122 °F) during the hottest seasons.
There are reports of temperatures higher than the listed world record of 56.7 °C (134.1 °F) during phenomena known as heat bursts, including a report of 87 °C (188 °F) in Abadan, Iran in June 1967. There are also reports made by satellite analysis, including one of 66.8 °C (152.2 °F) measured in the Flaming Mountains of China in 2008.[8] These temperatures have never been confirmed, and are not recognized as world records.[9] The former highest official temperature on Earth, held for 90 years by ‘Aziziya, Libya, was de-certified by the WMO (World Meteorological Organization) in January 2012 as the record for the world's highest surface temperature. (This temperature of 58 °C (136.4 °F), registered on 13 September 1922, is currently considered to have been a recorder's error.[10])
Christopher C. Burt, the weather historian writing for Weather Underground who shepherded the Libya reading's 2012 disqualification, believes that the 1913 Death Valley reading is "a myth", and is at least 2.2 or 2.8 °C (4 or 5 °F) too high,[11] as do other weather historians Dr. Arnold Court and William Taylor Reid.[12] Burt proposes that the highest reliably recorded temperature on Earth is still at Death Valley, but is instead 53.9 °C (129 °F) recorded five times: 20 July 1960, 18 July 1998, 20 July 2005, 7 July 2007, and 30 June 2013.[13][14]

The Truth Is Stranger Than Fiction!
on June 19, 2016
Posted by Wendell Malone