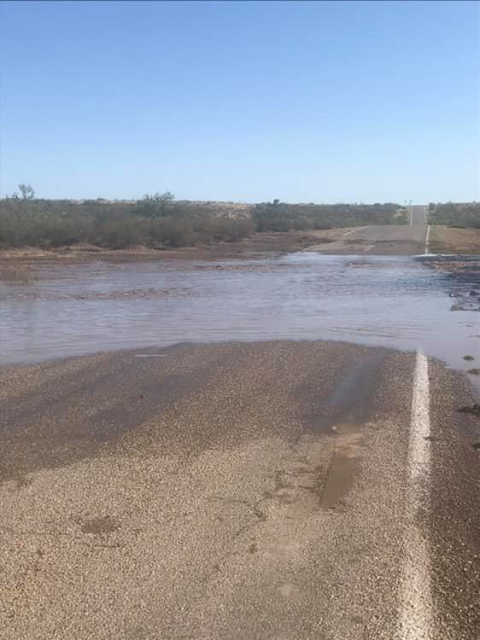 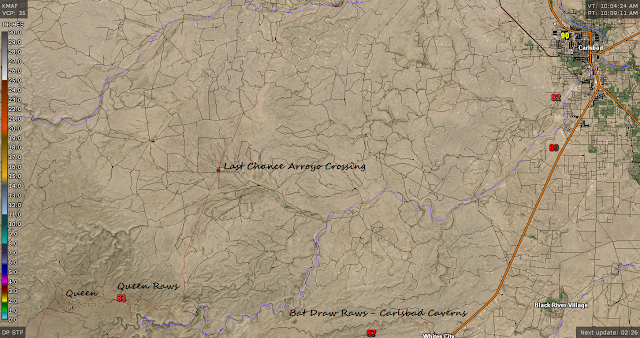 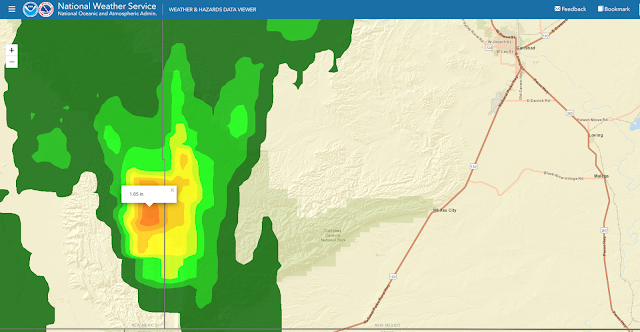 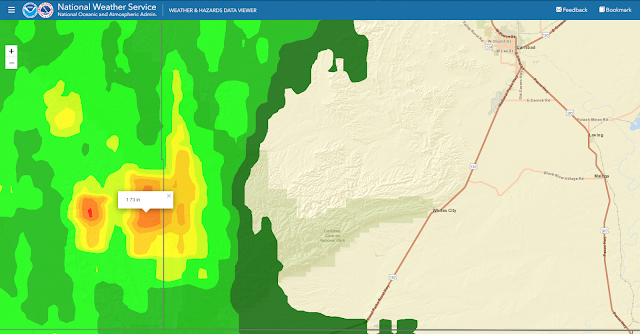 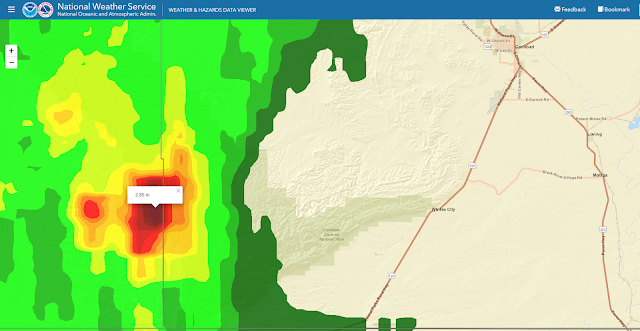 Yesterday afternoon radar and satellite data estimated that around 1.60" of rain fell on top of the Guadalupe mountain rim west of the Last Chance Arroyo crossing on St. Hwy 137.

But going back 72-hours it was estimate that nearly 3" of rain has fallen over this same exact spot. Highly localized but with potential deadly results. Localized thunderstorms producing heavy to very heavy rainfall in short periods of time like this are a common occurrence across the area.

There are literally hundreds and hundreds of these low water crossings (dipping down into normally dry arroyos) locally, and thousands state-wide.

So what caused the Last Chance Arroyo to flood? Looking back at the estimated rainfall totals for the past 24-hours, 48-hours, and 72-hours its easy to find the answer. Note that you can see the debris line on the road indicating that the flood waters were higher overnight than they were when this photo was taken this morning.

This raises another red flag locally since many times in the summer and early fall thunderstorms produce the heaviest rains from late in the afternoon into the overnight hours. Often it takes hours for the flood waters to flow down the canyons and arroyos to these low water crossings after the rains have fallen. These crossing can be miles from where the rains fell. Sometimes it may even be raining or have rained at these low waters crossing that are flooding.

A perfect example of this is the flash flooding that occurred in the Mayhill area of the southern Sacramento mountains on Saturday and Sunday, August 27th and 28th, 2005. As much as 4" to 8" of rain fell on the Rio Penasco watershed near the Mayhill area and produced flash flooding that sent flood waters down the Rio Pensaco to the Pecos River southeast of Artesia...70 miles away. Take a look at the videos in my blog post and you will see that not a drop of rain fell in the Pecos Valley in the Artesia area during this event. 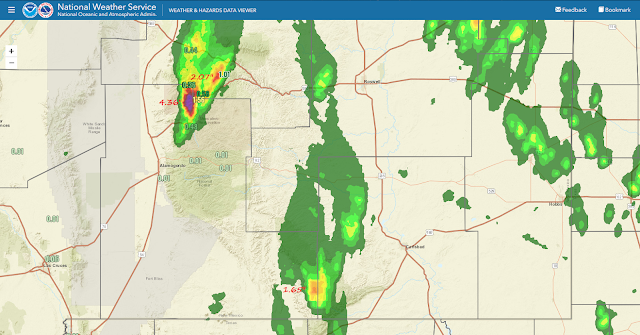 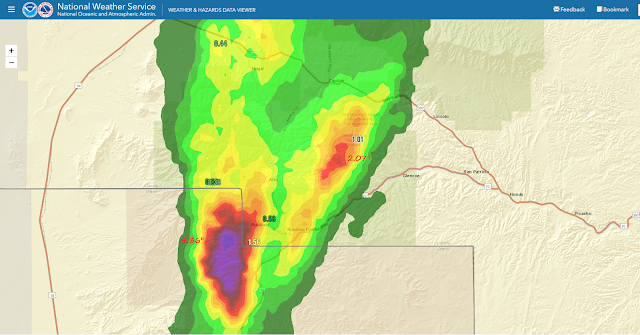 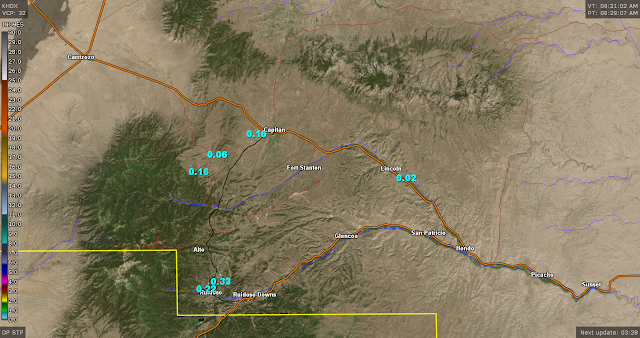 Localized thunderstorms dumped an estimated 2" of rain Saturday afternoon northeast of Ruidoso Downs, and as much as 4" southwest of Ruidoso. As is often the case many times the heaviest rains missed the online network of reporting weather stations...including Personal Weather Stations (PWS). Even with the CoCoRaHS network in place there still remains huge gaps in reported rainfall totals in the local area and across New Mexico.

A prime example of this was the Cloudcroft area Friday, August 9th. Radar and satellite estimates indicate that between 3" and 7" of rain fell on a very small area south and southwest of Cloudcroft. The Cloudcroft Climate Co-Op Station reported a 24-hour total of 2.24". But it was on the northern fringe of the heaviest rains. Personal Weather Stations in the local area reported 3" to just over 4" of rain. But as far as I am aware there wasn't any reported rainfall totals in the area of the heaviest rainfall. Its possible that someone did have a rain gauge in that area and Id love to find out just exactly how did fall verses what radar was showing.

What is concerning this time of the year is that when the rains do come they are often heavy. With those heavy rains that often occur in quick bursts, comes the danger of localized flash flooding...in low lying areas, city streets, and normally dry arroyos. Its very easy to get caught in these raging flood waters if you are not paying attention. Especially at night. Southeastern New Mexico and the Guadalupe, Sacramento, and Capitan mountains have a long history of flash flooding. Sometimes with deadly results.

Remember it only takes around a foot of fast flowing water to knock you off your feet and around eighteen inches of fast flowing water to begin to sweep most vehicles away. Most flash flood deaths occur at night when its harder to determine the depth of the water. The general rule of thumb is that if the arroyo you come to is flooded...don't drive through it. Turn around.

We are entering our wettest time of the year and the threat for localized flash flooding will only increase with time as the rains increase. Sadly many people won't heed or follow the warnings signs during flash flood events. And this can produce tragic results. We live in one of the most flash flood prone areas of the state and yet nearly every year someone drives into a flooded area or arroyo and has to be rescued. This behavior is careless, irresponsible and needless.

Here in the Pecos Valley most stations are running a little below for their year-to-date rainfall totals. Some are not. I've only recorded 4.88" of rainfall so far this year at our home here in Carlsbad while the Carlsbad Climate Co-Op Station located two miles northeast of the Carlsbad Airport is reporting 7.53" so far this year (Jan 1st - Aug 10th). My rain gauge is roughly five miles to the northwest of the Carlsbad Climate Co-Op rain gauge. Yet there is a difference of three inches between us. Hit and miss thunderstorms produce local rainfall totals like this quiet often. 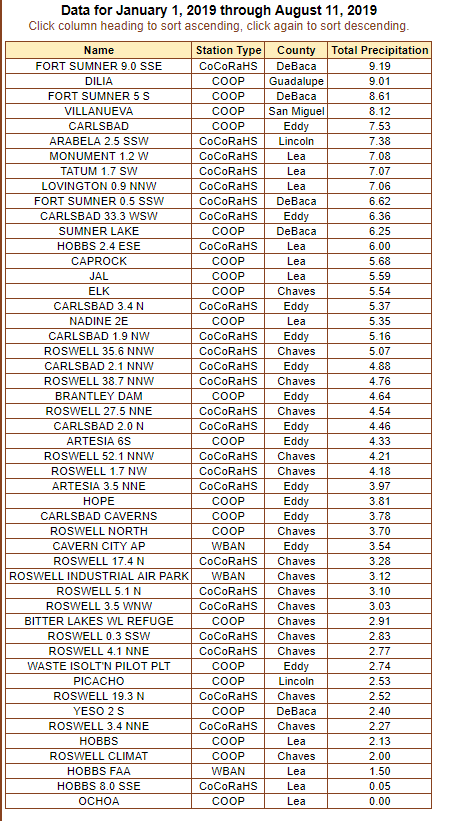 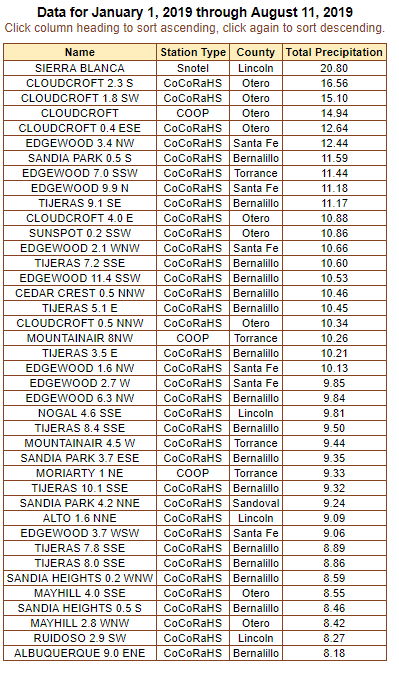 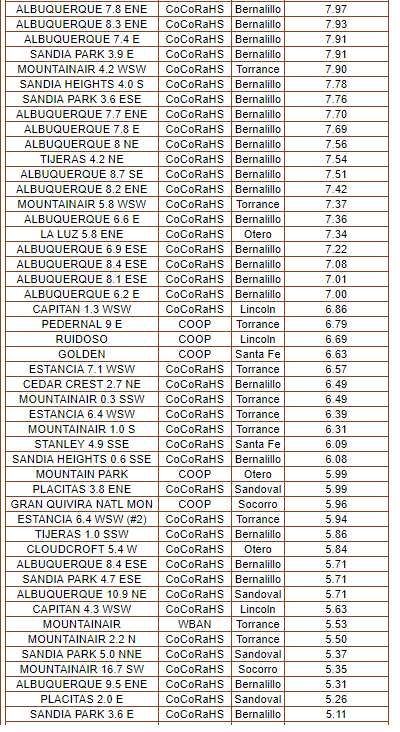 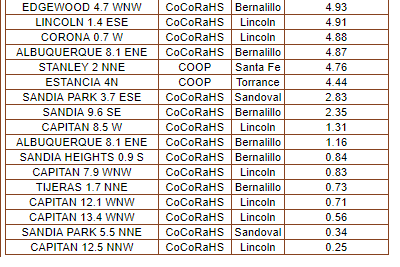