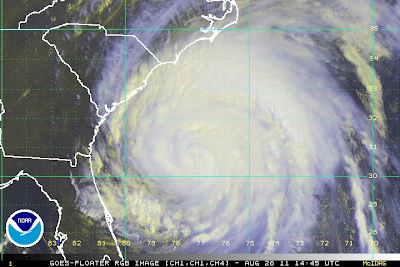 Visible Satellite Image Of Hurricane Irene At 8 :45 AM MDT. 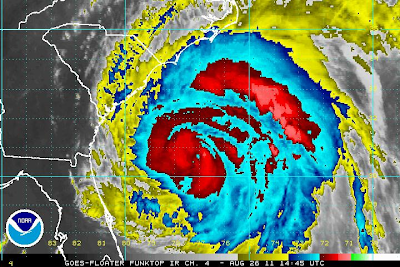 IR Funktop Satellite Image Of Hurricane Irene At 8:45 AM MDT. 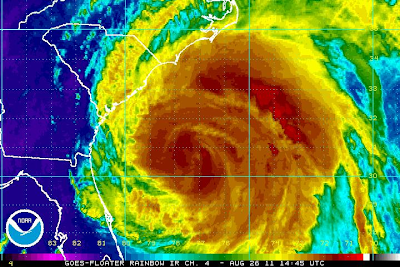 IR Rainbow Satellite Image Of Hurricane Irene At 8:45 AM MDT. 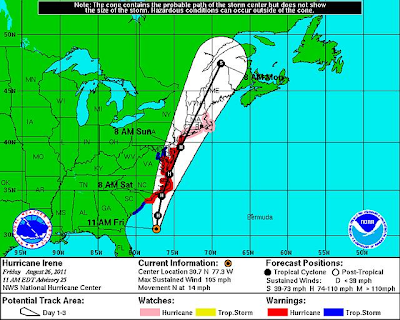 
Irene is huge, nearly 500 miles wide, and has to the potential to grow even bigger in aerial coverage. Irene is fixing to move over some very warm waters, as she nears the Outer Banks of North Carolina tomorrow morning. Currently she is forecast to move inland just after daybreak tomorrow, and then continue her track northward Saturday into Sunday into Southern New England.


Irene is forecast to strengthen between now and tomorrow morning when she moves inland across Eastern North Carolina, near the Outer Banks. She could come inland as a Major Hurricane, a Category 3! She has the real possibility of becoming a history maker!

Large-Scale Evacuations Under Way Ahead of Irene-

"With dangerous Hurricane Irene drawing closer to the East Coast, numerous large-scale evacuations are under way from the Carolinas north to the New York City area.
Thousands more near the Northeast coast could be told to evacuate later today, as confidence increases in Irene becoming one of the worst hurricanes to impact the region in decades.
The AccuWeather.com Hurricane Center continues to forecast Irene's landfall Saturday evening in eastern North Carolina as a major hurricane before a perilous encounter with the mid-Atlantic coast and New York City Sunday.
Such a track will impact millions, and officials are taking no chances by making evacuations mandatory and stressing that interrupted transportation will hinder any chances of emergency rescues."

"AccuWeather.com Hurricane Center meteorologists continue to forecast Hurricane Irene will strike the Outer Banks of North Carolina on Saturday before taking aim at themid-Atlantic, New York City and New England.
Mandatory evacuation orders have been issued for thousands of coastal residents from North Carolina north to the New York City area, with many more sure to follow.
After the North Carolina landfall, Irene will pass close to or over the Delmarva Peninsula and New Jersey, then move on to the New York City area and interior New England.
The northern portion of this track is farther west and a bit slower than forecast earlier this week, and will result in more serious problems with heavy rain and damaging wind gusts farther west in New England and the northern mid-Atlantic.
Areas near and west of the center of Irene will have dangerous conditions related to flash and urban flooding. The flooding may be intensified in areas that have received torrential rainfall recently this month, such as coastal areas of the Northeast.
Areas near and east of the center of Irene will experience the strongest winds and related damage. 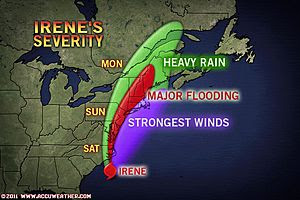 There is potential for a foot of rain along Irene's path, which can lead to life-threatening flooding."