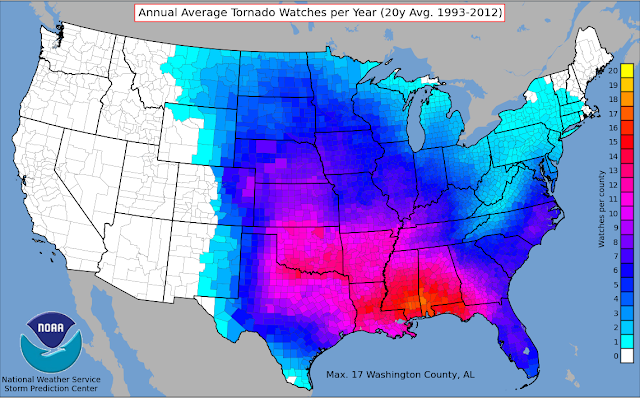 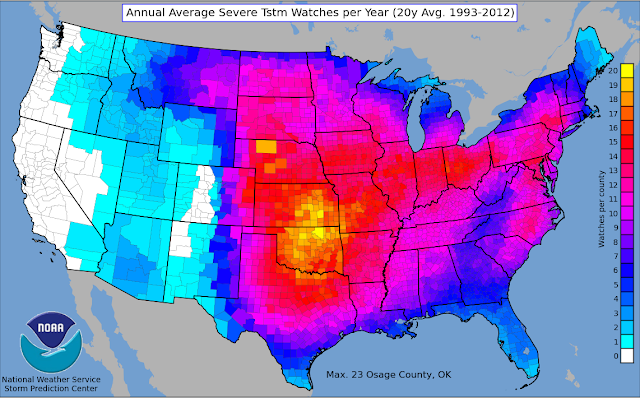 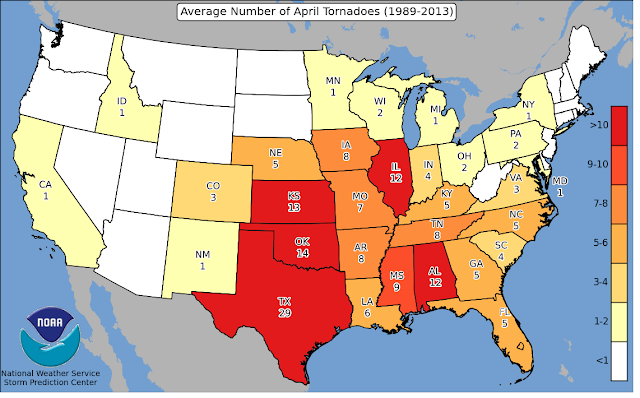 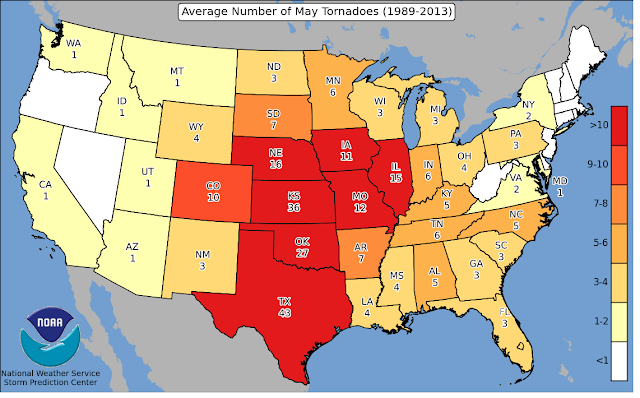 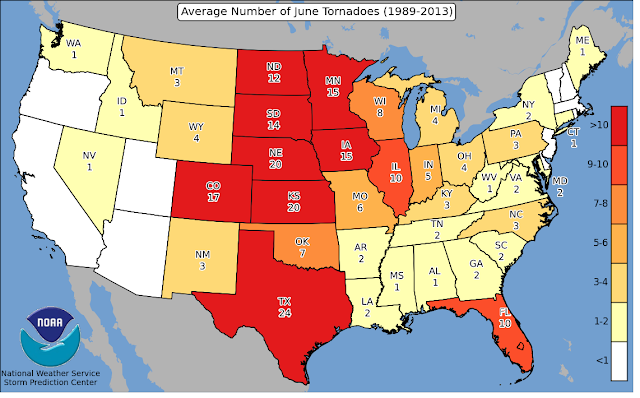 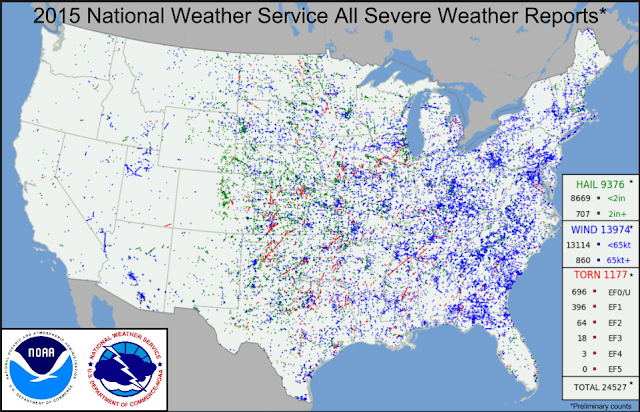 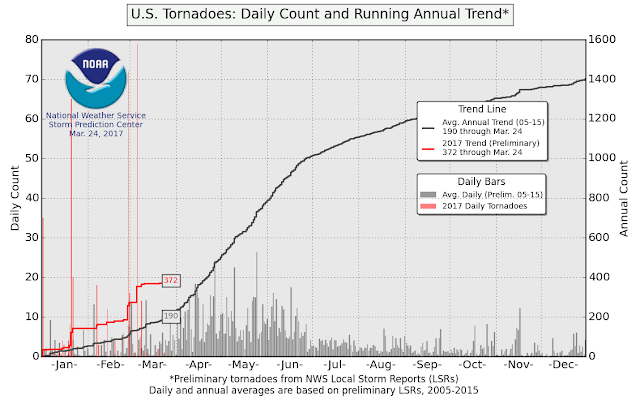 This spring is promising to be rather active severe weatherwise and in fact we are already off to an above normal start as far as the reported tornadoes to date is concerned. Here in Southeastern New Mexico El Niño springs can be a little more active than normal severe weatherwise. One of the factors governing this is simply due to the additional moisture being pumped into the local area from the Gulf of Mexico and from the Baja Region. Strong closed or cutoff upper level lows tend to take a southern track across the area which also adds to the mix. And the southern branch of the jet stream or the subtropical branch tends to be further south and stronger.

Next Storm Impacts The Area Monday Night Into Thursday. 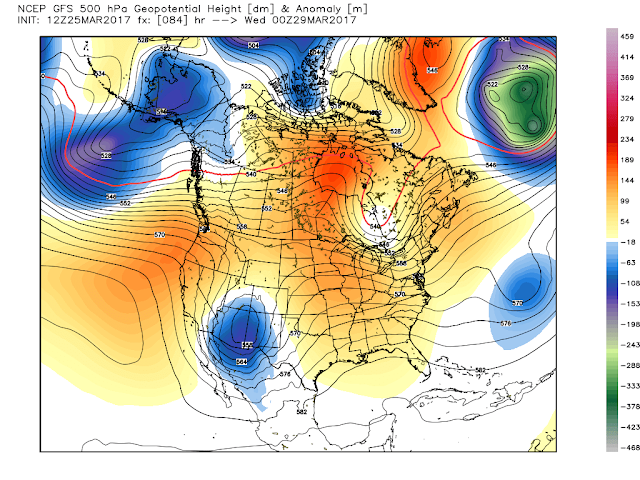 This mornings 12Z/6 AM MDT run of the GFS model depicts a rather strong and cold closed low settling into New Mexico Tuesday evening. 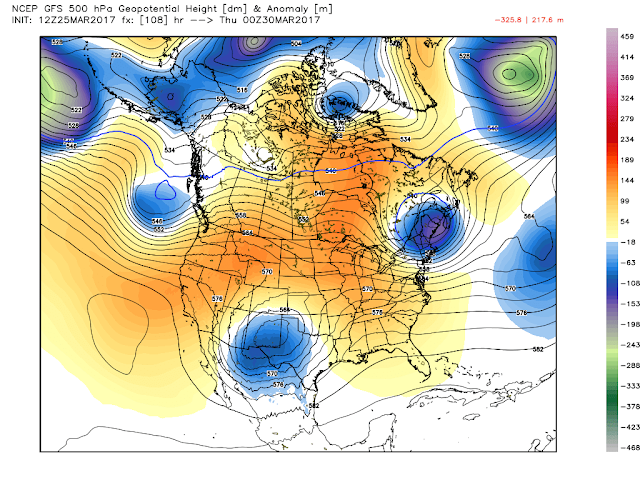 By late Wednesday afternoon this model forecasts the center of the closed low to be located over Southeastern New Mexico. The Canadian model (GEM) has a similar forecast track but a little further to the south.Last nights European (ECMWF) model is similar to both the GFS and GEM models but a little faster and further north and east with the storm on Wednesday. For now it appears that a cold and strong upper level low will slowly slide over the state Monday afternoon into Thursday.

Heavy to very heavy snowfall is forecast for the northern mountains of New Mexico and the southern mountains of Colorado midweek from this next storm. The GFS is going a little crazy with storm totals of over 50" by Thursday morning! Heavy rain is also forecast by this model over Northern and Northeastern New Mexico. Snow could fall again over the Sacramento and Capitan Mountains. 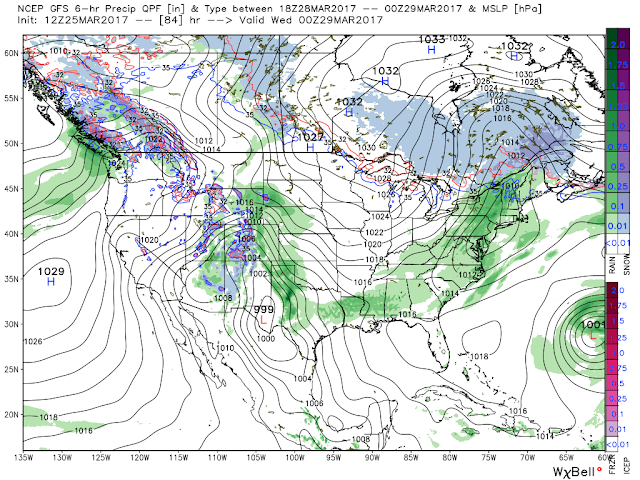 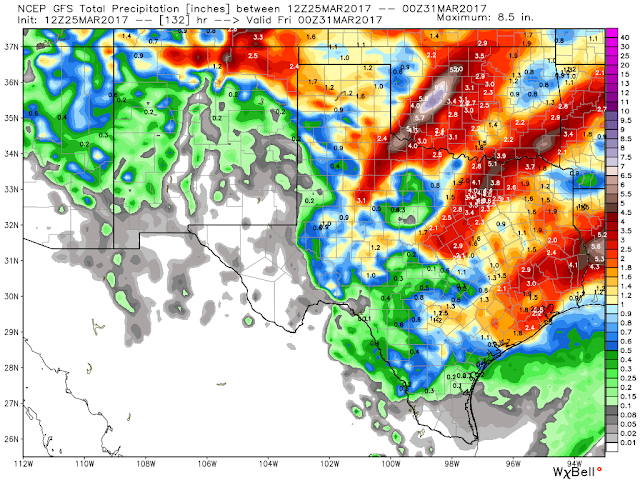 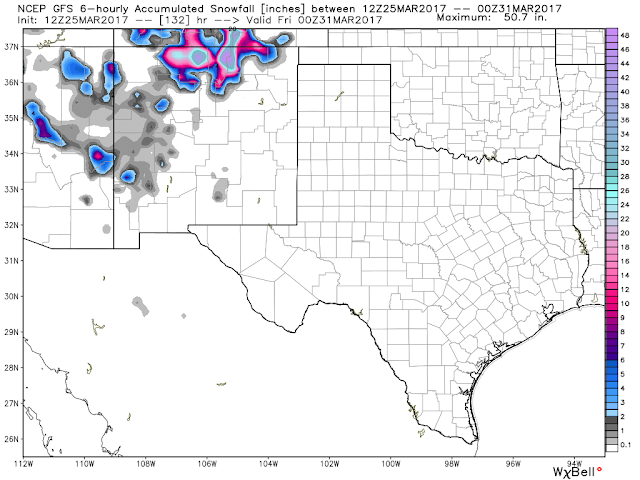 Given that the storm is still three to five days away from impacting the state, and that the models aren't in good synchronization concerning the track, speed, and strength of this strong winter storm headed our way, its tough to say who gets clobbered and who does not at this point. Remember spring storms can be just as strong and dangerous as winter storms so keep up to date concerning your local weather forecasts going into next week. A lot of uncertainties yet so take these models forecasts with a grain of salt and be prepared for changes in our local weather forecasts. 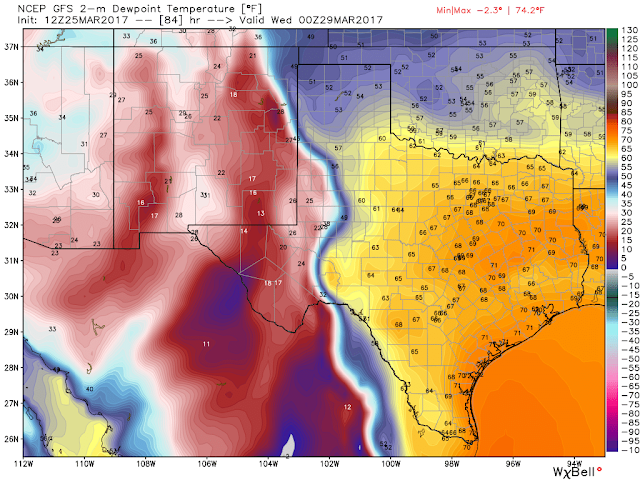 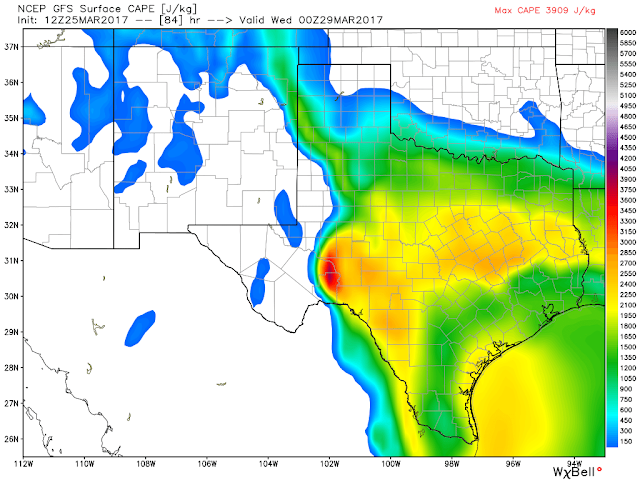 No doubt the Gulf of Mexico will open up again as the surface pressure falls in response to the approaching storm to our west. A fairly sharp dryline is forecast by this morning's run of the GFS model to be located over West Texas Tuesday afternoon. Dew point temperatures are forecast to be in the teens across Eastern and Southern New Mexico west of the dryline and in the 60's east of it in West Texas.

Notice the 3,900 j/kg cape values south of the Midland/Odessa areas. As a general rule of thumb thunderstorm development occurs with dew points near 50º or higher and cape values of 500 j/kg or higher. So locally anytime the cape values get up above 1,500 j/kg with dew points in the 60's this tends to turn out to be a good severe weather, storm chase day.

There are always exceptions to this like "will the atmosphere be capped or not." Capping of the atmosphere occurs at the mid levels (usually from around 5,000' to 15, 000' when a pocket of warm air develops...this in effect acts lid a lid thus preventing thunderstorm development. Another ingredient needed for severe weather development is "wind shear" which can be directional and or speed shear. Meaning that the winds above the surface turn or change direction with height and increase in speed. There are other factors at play that contribute to a severe weather outbreak not mentioned here.

Another aspect of this midweek storm will be strong surface winds out of the southwest and west again. Just how strong is not known at this time but another significant wind event could occur along with more blowing dust and Critically Dangerous Fire Weather Conditions. More on this next week. 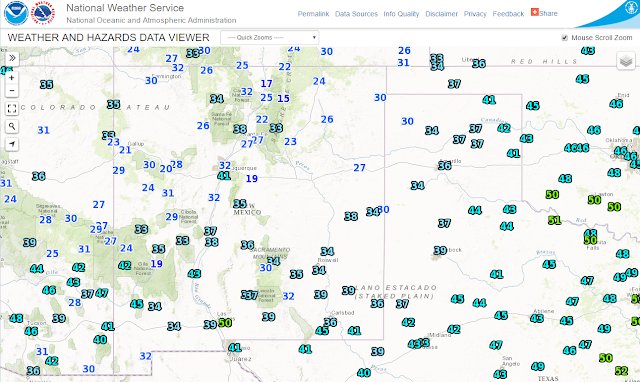 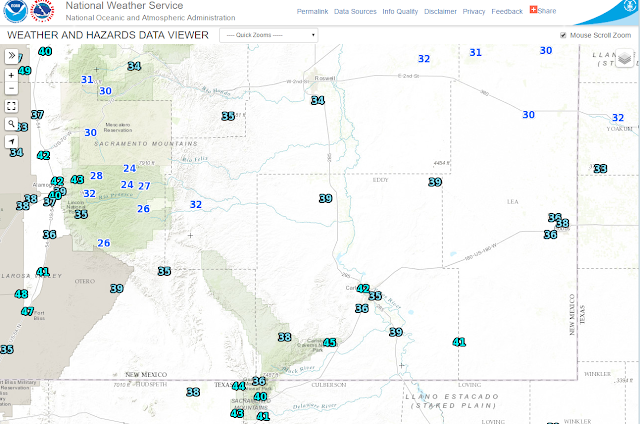 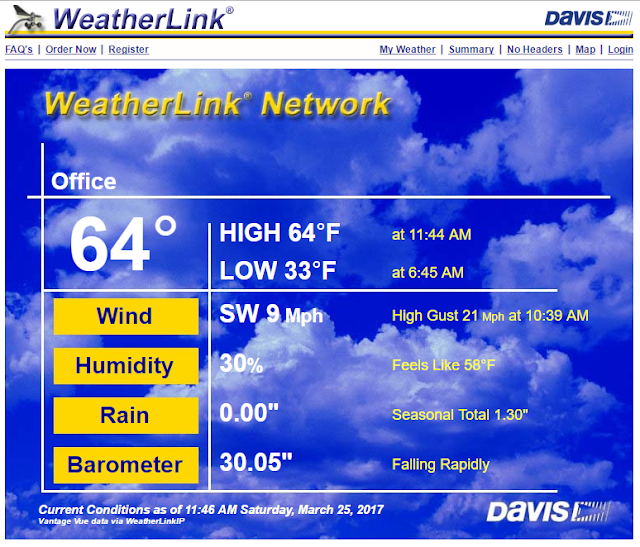 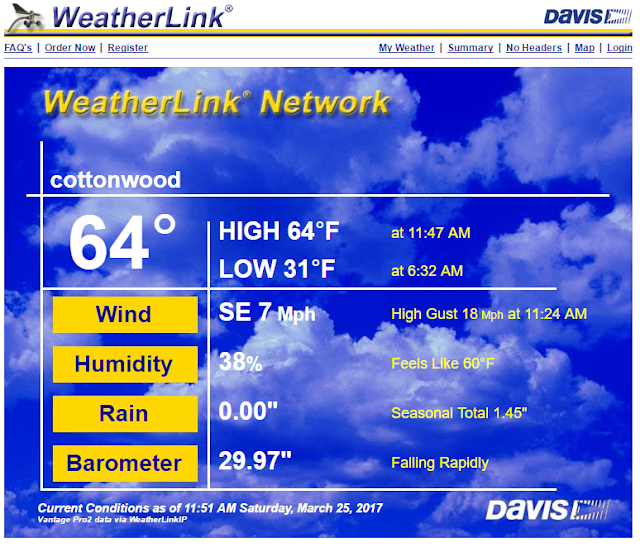 Alfadale - In Atoka South Of Artesia. 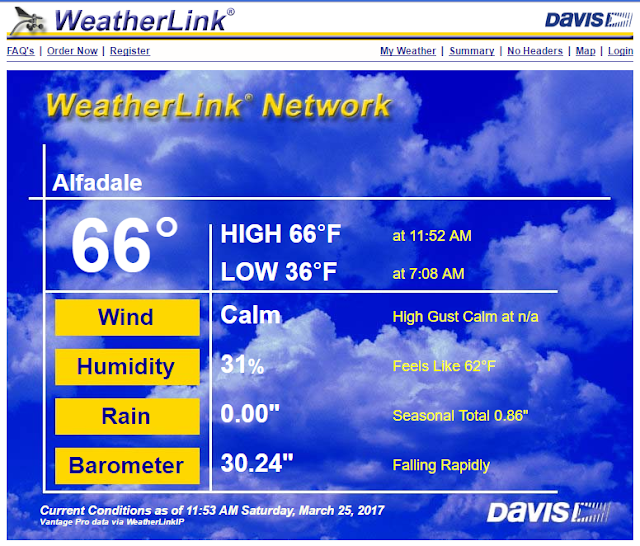 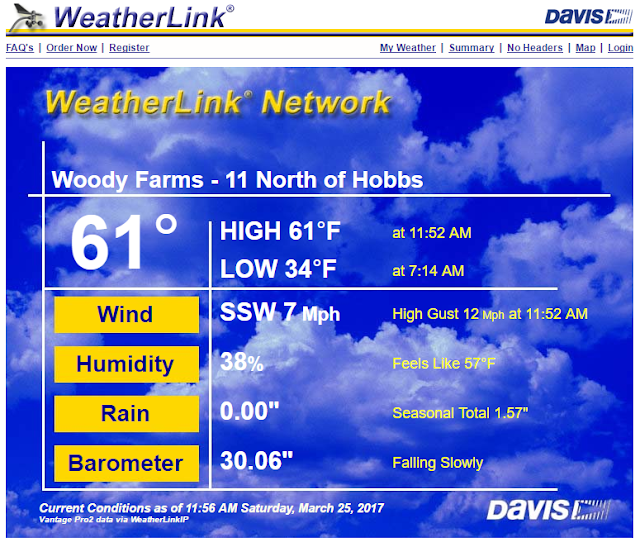 As I had suspected yesterday that some of our lower valley rural areas here in Southeastern New Mexico dropped down to close to freezing this morning. Nothing unusual about this given the fact that most of our last freezes on average occur during the first couple weeks of April.

The Truth Is Stranger Than Fiction!
on March 25, 2017
Posted by Wendell Malone