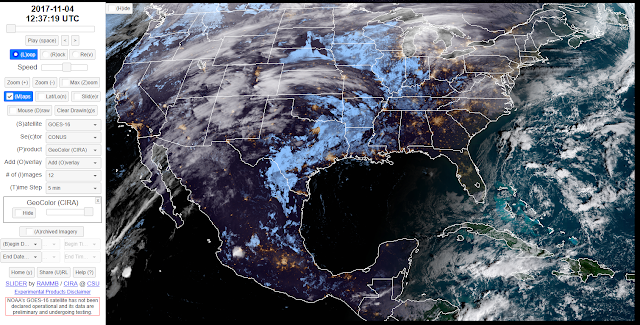 This false color satellite image shows lots of low clouds and fog (depicted by the light blue shading) covering parts of south and central Texas early this morning. In fact the fog extends as far north as the Midland/Odessa area where their latest observation at 7:53 AM CDT/6:53 AM MDT indicates that their visibility was 1/4 of a mile and the sky was obscured with a vertical height into the fog of just 100 feet.

In contrast mid and high level clouds (depicted by the gray shades) are overspreading New Mexico and other parts of West Texas from the southwest. 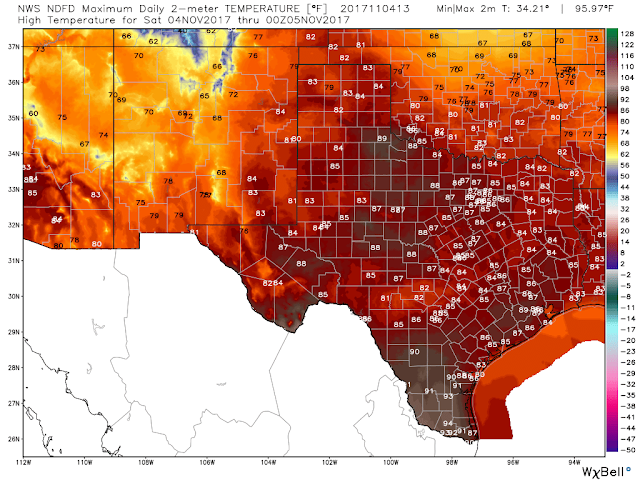 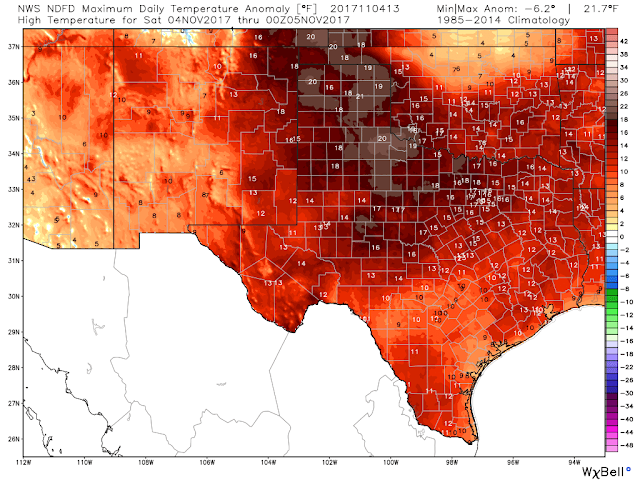 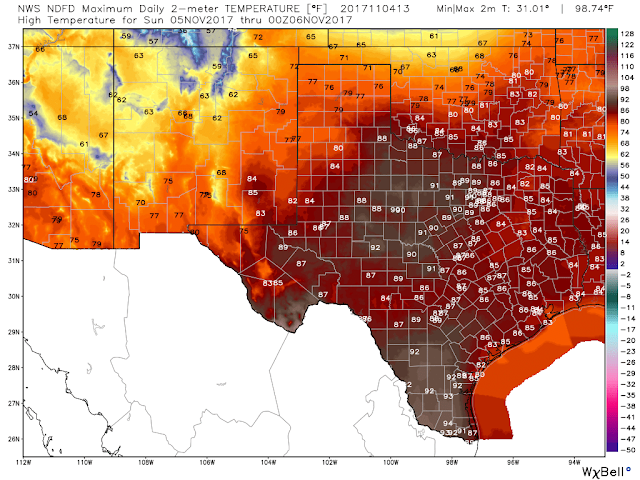 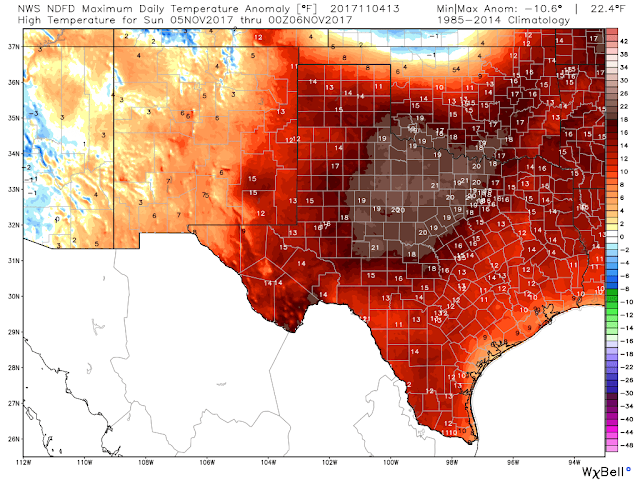 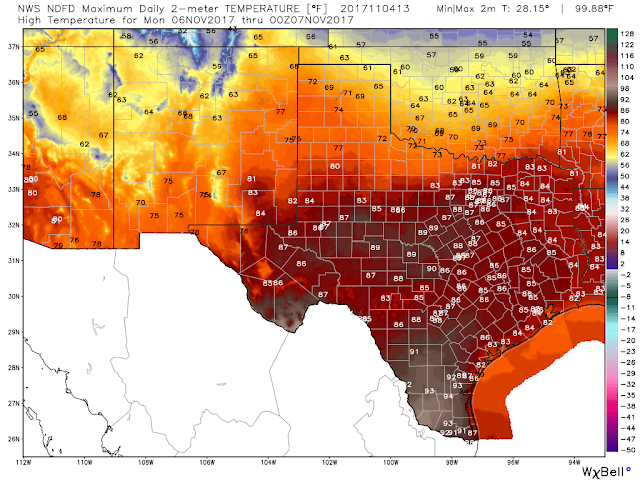 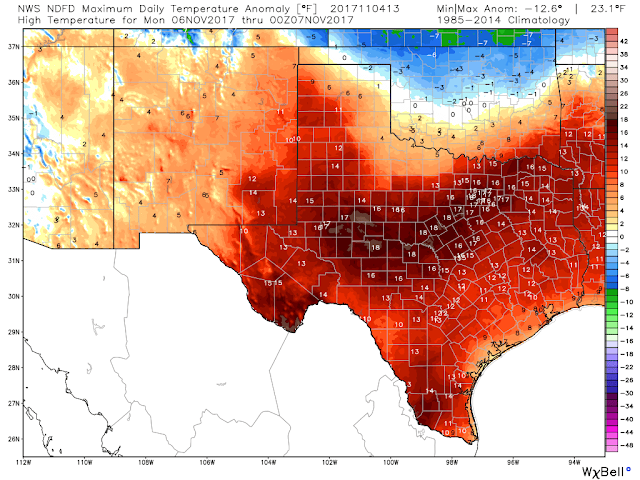 Indian Summer weather has taken hold of the area with above normal temperatures since our first freeze of the season last week. This trend is forecast to continue overall for the next week to ten days. With our high temps locally forecast to range from 80ºF to 85ºF today into Tuesday these readings will be some 10 to 15 degrees above normal for the date. 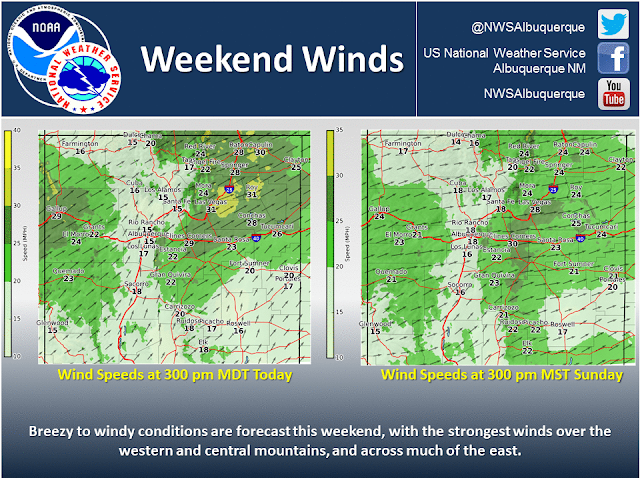 Higher gusts will be possible. 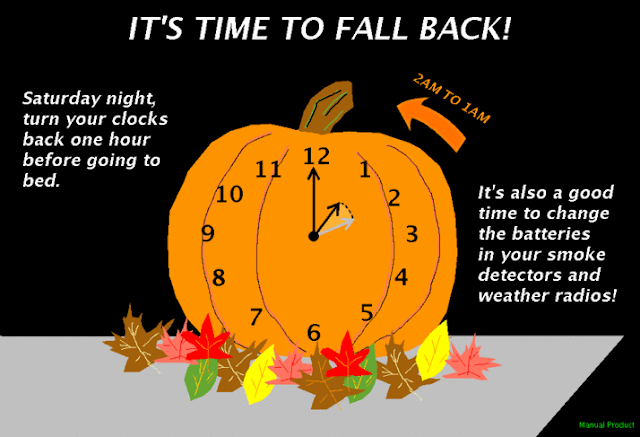 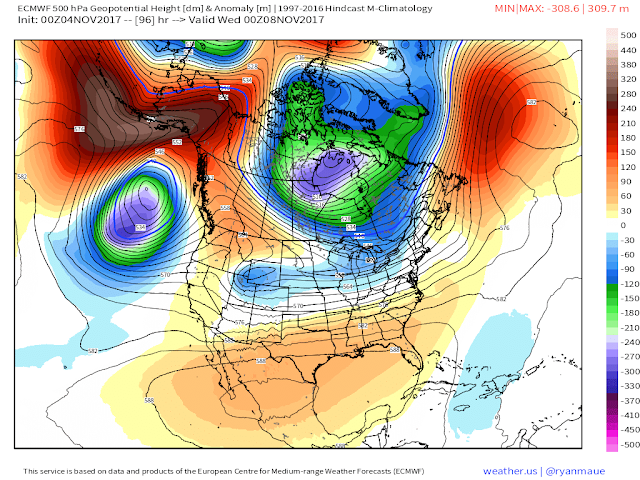 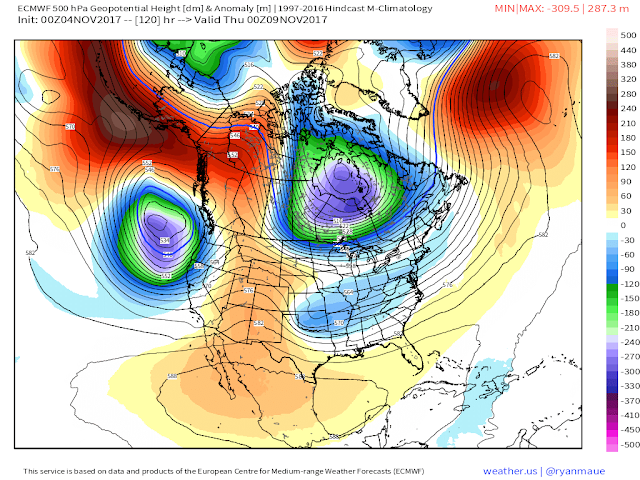 Blame our fall warmth on the basically zonal flow at the mid and upper levels of the atmosphere. Until a decent storm can break through the riding south of Alaska and dive into the Desert Southwest not much change is forecast by the models for the next week to ten days. A short wave trough of low pressure will swing eastward across northern Colorado Tuesday. This will drive a cold front south into the area by Tuesday night. 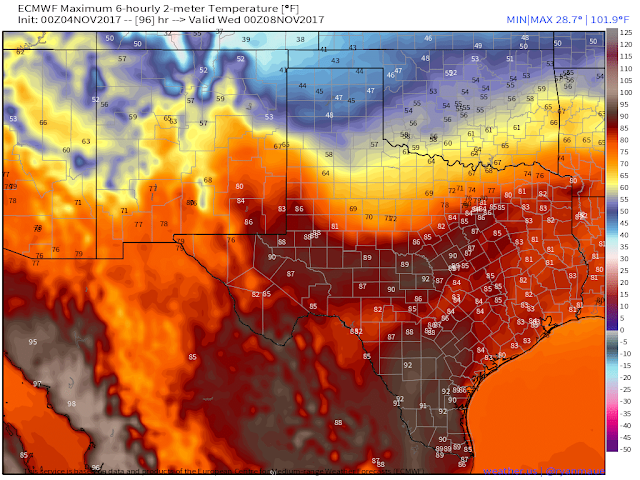 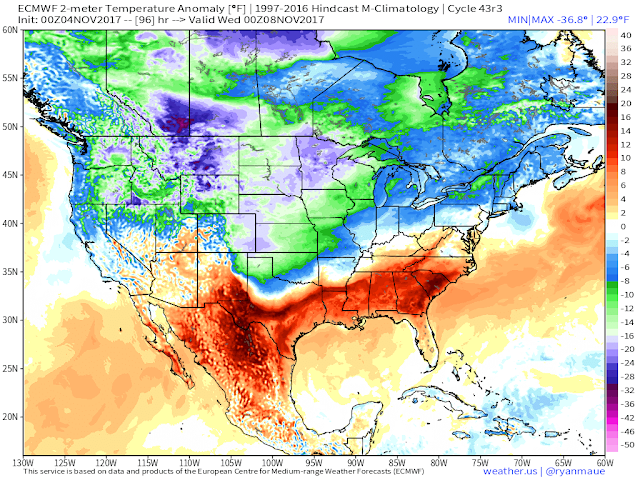 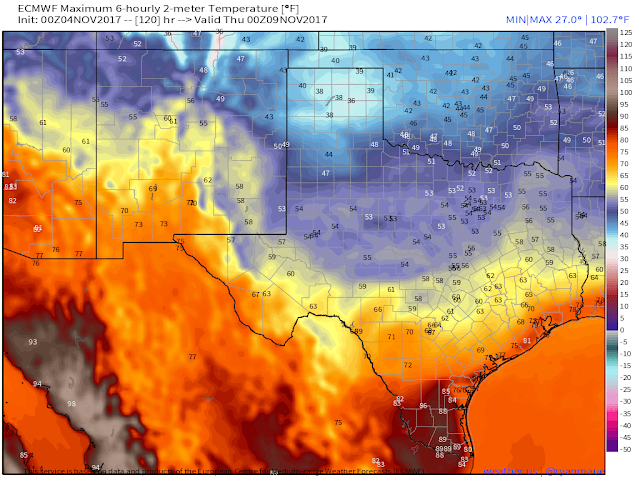 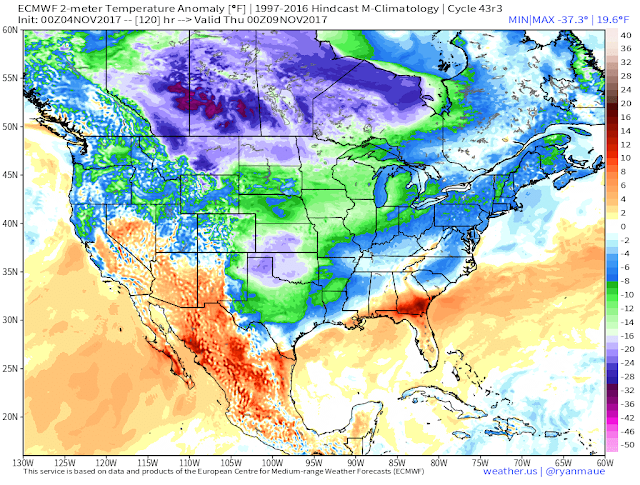 Above normal temperatures will briefly come to an end Wednesday behind a southward moving back door cold front that will enter the local area Tuesday afternoon and evening. After seeing highs in the 80's Wednesday's highs will likely only be in the 50's. Highs on Wednesday will be some 15ºF to 20ºF below normal on Wednesday. Therefore our temperature roller coaster ride continues. 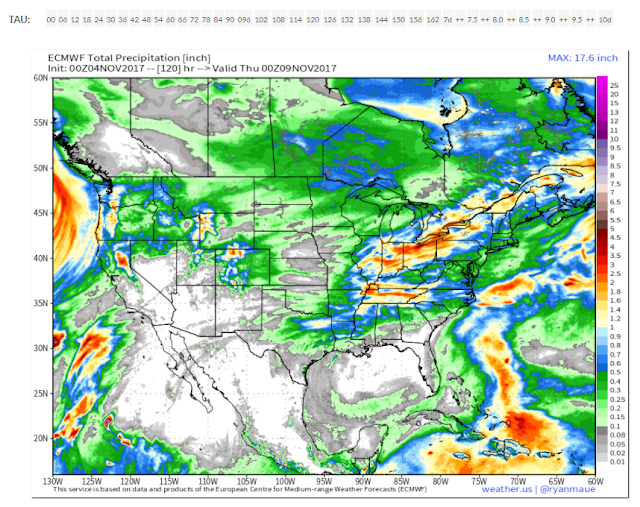 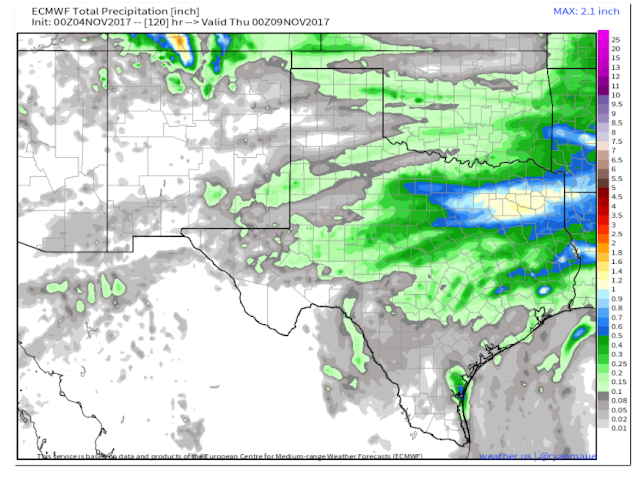 Last nights run of the European (ECMWF) forecast model breaks out  a few pockets of light rain Tuesday night into Wednesday morning behind the cold front in the moist easterly upslope flow. I suspect that this will be mostly light drizzle and low clouds and if it does rain it won't be much. 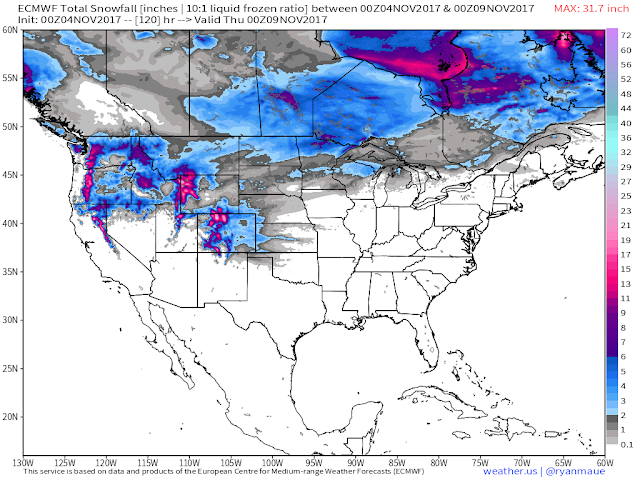 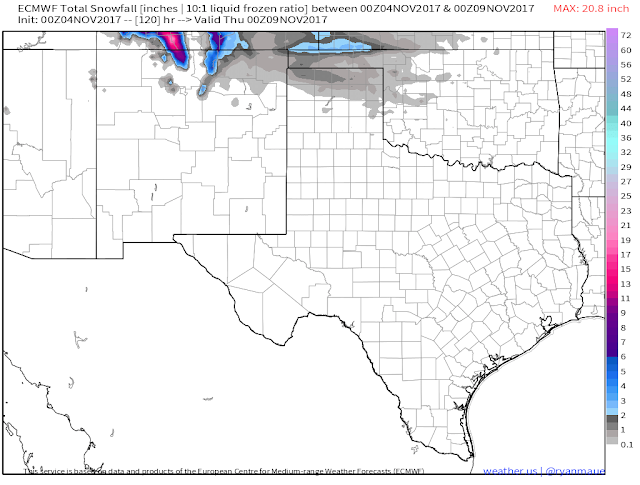 Snow may fall across the higher elevations of the northern Mountains of the state. The highest totals will likely be along and close to the Colorado border. 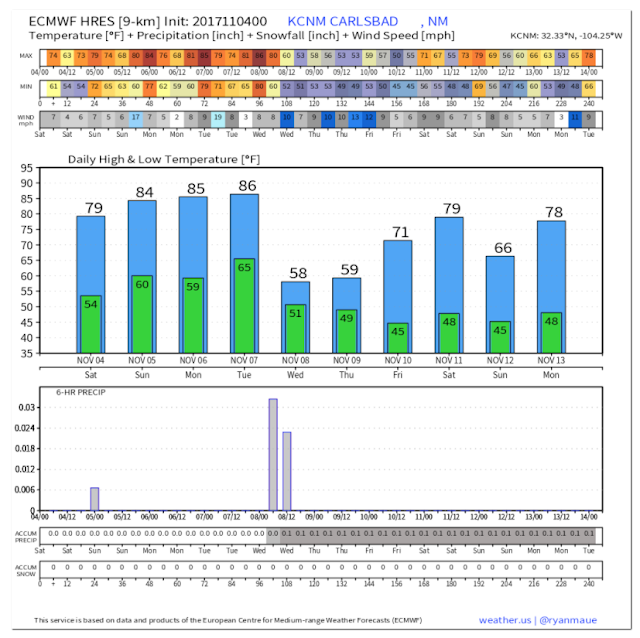 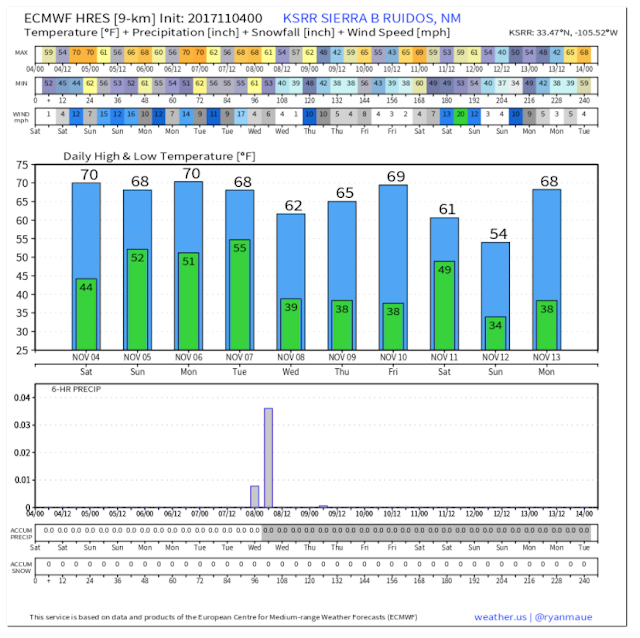 A long time ago I learned that what goes up (in the weather world) will come back down. Its just a matter of when. Even though we have had a fairly mild and tranquil start to our fall with above normal temperatures I don't expect this to last. There are indications in the long range models and model teleconnections that changes will be coming by the last week or so of the month. A turn to colder weather with stormier conditions appear in the making.

Weather On This Date In History.
(November 4th). 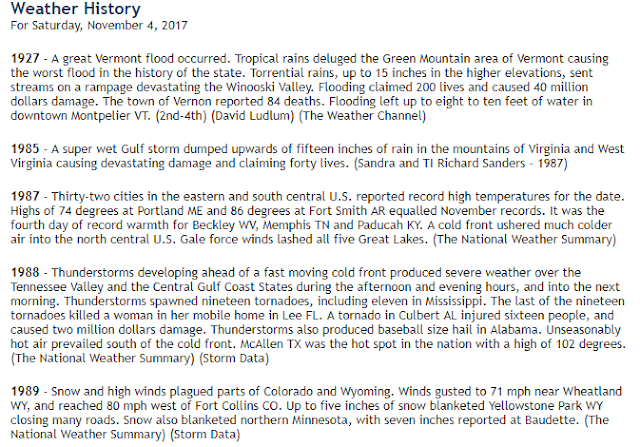 The Truth Is Stranger Than Fiction!
on November 04, 2017
Posted by Wendell Malone