Throw Back Thursday - I've Been Watching/Observing/Chasing Our Weather A Long Time. 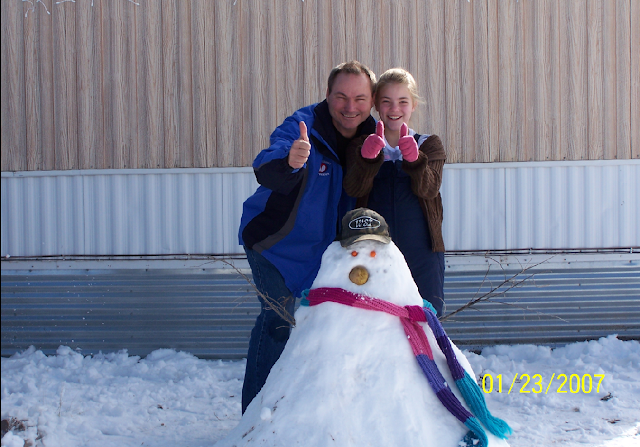 Nine Years Ago & I Still Had Lots Of Hair. Ha!
This Is Kaytlyn & I In Carlsbad, NM (Our Youngest Daughter When She Was 9). 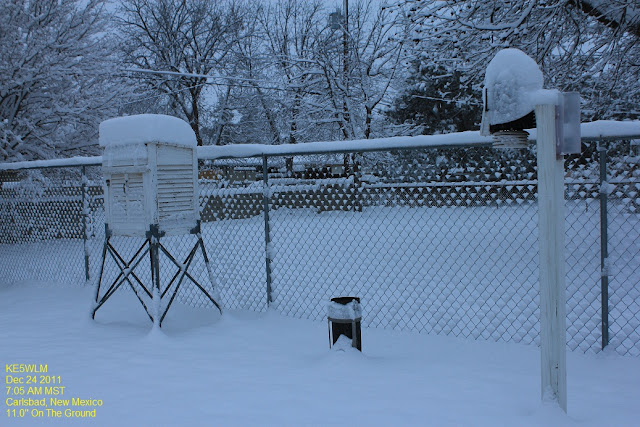 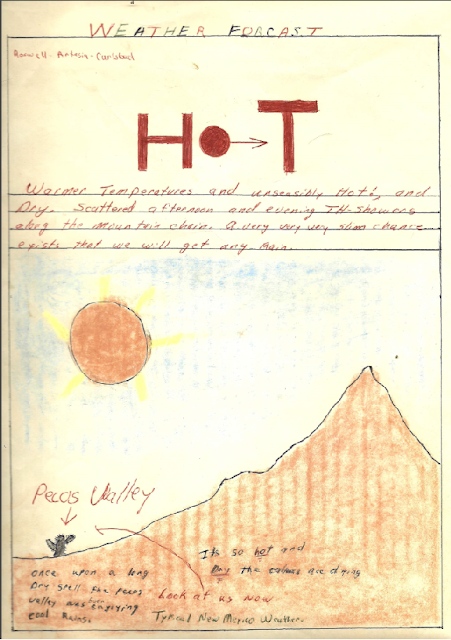 A few years ago my mother dug this up out of her basement. I was blogging about our local weather long before the Internet and Web Pages. She says that I was in the 5th grade and 10 years old at the time. I have several of these hanging on my office wall.

My Time As A NWS Climate Co-Op Observer. 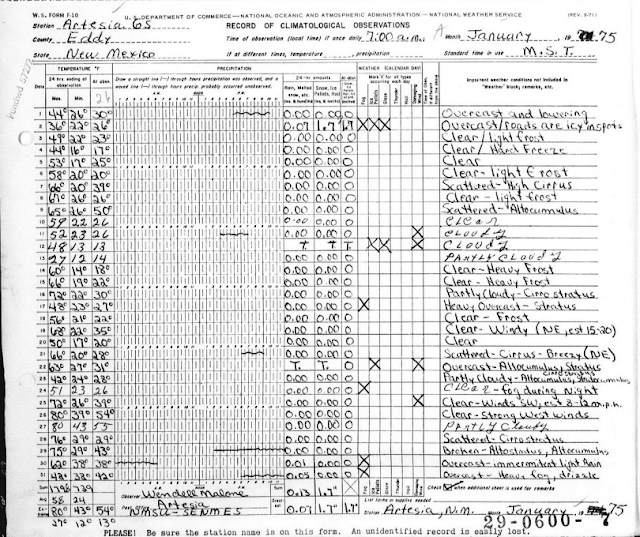 From the fall of 1974 through the summer of 1975 I was the "official" Climate Co-Op Weather Observer for Artesia, New Mexico. The weather station was located 6 miles south-southeast of town (still there today) at the New Mexico State University Agricultural Science Research Center (NMSU SEBS). I was 16-17 years old at the time and a Junior in High School. We lived in Atoka 2 miles north of the station. I would wake up and walk or ride my bike to the Science Center every morning to note the 24-hour climate data, then call it in to our local Radio Station (KSVP).

I will forever be in debt to Carl Barnes the Superintendent and Paul Franco the Farm Foreman and full time weather observer for letting me do this. As a kid it was a dream come true. They had several extra Stevenson Instrument Shelters, 20" rain buckets, and a Townsend Support with a Mercury and Alcohol Minimum Thermometers that I was allowed to "borrow" for my own personal use. 41 years later I am still "borrowing" them and compare their readings with my Davis Vantage Pro2 readings. See the photo above taken in our backyard.

When I was younger I had an array of thermometers (bought from our local hardware store of TG&Y) set up in various types of homemade Instrument Shelters. My mother gave me my first Weather Station Kit for my 16th birthday...I think she ordered it from the Sears Catalogue. I was always taking a temperature reading or checking the rain gauge after a summer thunderstorm. Which many time caused me to get into trouble since I was supposed to be working on the farm or in our grocery store. Needless to day that my head was always "in the clouds" as a kid growing up. I used to joke with my friends when I was growing up and tell them that while we were in High School and they were busy "chasing the girls" I was busy chasing storms. 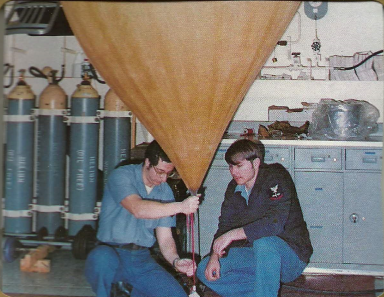 On June 20th, 1976 I was inducted into the US Navy in El Paso, Texas after successfully graduating Artesia High School. After bootcamp in San Diego, California I came home on leave for 30 days then it was off to my basic Navy Weather School located in Lakehurst, New Jersey. I arrived at my first duty station at the Naval Air Station in Corpus Christi, Texas in February of 1977. Later I was transferred to the USS Dwight D. Eisenhower (CVN-69) homeported in Norfolk, Virginia. I stayed aboard the IKE as a Surface Weather Observer, Assistant Forecaster, and Upper Air Supervisor until June of 1980. After the failed rescue attempt of our American Embassy personal on my 22nd birthday in April of 1980 I chose to leave the Navy.

My partner and I are preparing a 600 gram helium weather balloon for launch (photo above). I'm on the right. In those days when we launched a weather balloon/radiosonde we sat in front of a receiver in the balloon room, and slowly double checked the data coming back to us from the radiosonde attached. We then would take the data printout up to the weather office located on the O-10 level in the Island and plott it out on a Skew-T Graph. The whole process took about four hours to complete.

For those of you who think that trying to figure out a forecast is tough trying doing so aboard an aircraft carrier in the middle of nowheresville on one of the world's seven seas. With the nearest weather station nearest you being another ship, or a land station 1,000 miles away. I hated analyzing the Russian Ship reports...they lied all the time about their latitude and longitude. Which of course meant that we had to guess where they were located based on their coded weather observations.

Try plotting, analyzing, and forecasting a Surface or 500 millibar map while you are halfway between America and Spain. In those days we had no wind data from our balloon launches. We had to manually track them with our antennas. Since the carrier was always moving it was impossible to derive wind data. More than one Surface or 500 millibar chart I analyzed contained only a handful of reports covering thousands of square miles...and some of those reports were from our own pilots or ships giving us temperature, and estimated wind speed and direction while in flight, or following along beside us.

In the mid 1980's National Weather Service and the Federal Aviation Administration started contracting out the nations smaller Flight Service Stations. I went to work as the Supervisory Weather Observer at the Carlsbad Airport in February 1985. I ended up at three of our local airports with this job between 1985 and 2000. Carlsbad (KCNM), Roswell (KROW), and Wink/Kermit, Texas (KINK). In the late 1990's and early 2000's the Weather Service and FAA commissioned the modern day Automated Surface Weather Observing Systems (ASOS) and the Automated Weather Observing Systems (AWOS) thus ending my career as a Surface Weather Observer. All total with my time in the Navy I was a professional Weather Observer for 171/2 years.

I have been watching, observing, chasing, photographing the weather now for 43 years. I started chasing storms locally when I was 15 years old. In those days I would jump into my granddads 1964 Ford Pickup and take off after a distant storm. No cell phone, no digital camera, no ham radio, no Internet with radar, just me, my truck and the storm. Sometimes Id end up 50 miles from home and get into a hailstorm. I would then turn around and drive back to Artesia to an Allsup's Convenience Store, or stop at a Farmers/Ranchers home and borrow their phone, to make a collect phone to the Albuquerque National Weather Service Office...and give them my report. More often than not those reports were more than hour old.

Today I use GRLevel3 Radar on my Desktop and Laptop Computers, Radarscope and Pykl3 radar on my phone, and take my digital Canon Camera when I chase. Using the Spotter Network app I am able to submit a storm report instantly via my phone. I subscribe to WeatherBell Analytics for most of the graphics I use on my blogs. Compare these maps today with the old "NGM, LFM, and AVN Difax Charts that we used back in the 1980's and 1990's. Times have changed in the chaser world for sure.

I still keep local weather records via my instrumentation in my backyard. I love watching, observing, chasing, and photographing our weather more than forecasting it. I wanted someplace to share my photos and chase stories, as well as someway to document our local storms so I had an idea.

My passion for weather continues unabated today. When we can my wife and I chase storms together. There is nothing better than being in the middle of nowhere watching mother nature at her best with the love of your life! Thanks for visiting folks.

The Truth Is Stranger Than Fiction!
at Thursday, January 21, 2016