Fake Weather News & Its Associated Hype Is Out Of Control! 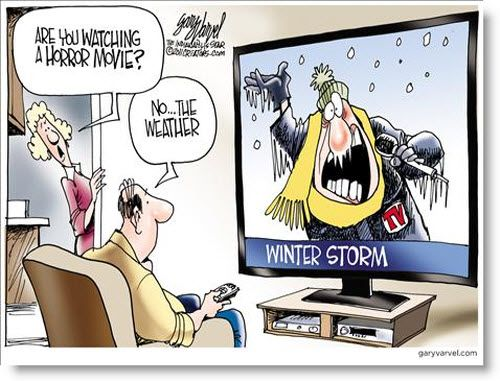 Fake Weather News Is Out Of Control!

I don't know about you but I've long grown tired of the dramatization of every weather event by the mainstream news media, the Weather Channel, and many weather/climate bloggers every time there is a storm. When an arctic air mass invades the U.S. its automatically blamed on the "Polar Vortex." Which by the way is nothing unusual, and is a meteorological phenomena that occurs every winter. But that's not what the mainstream media and everyone on board the Climate Change bandwagon will tell you. Lets not forget that it wasn't good enough that Hurricanes and Typhoons were named. Or no the Weather Channel and others decided that winter storms too should be named. I'm sorry but I just don't get that. Yea some of those names sound cute...but really what's the purpose other than sensationalism and hype? I'm sure its good for their marketing but in my opinion this is simply ridiculous. 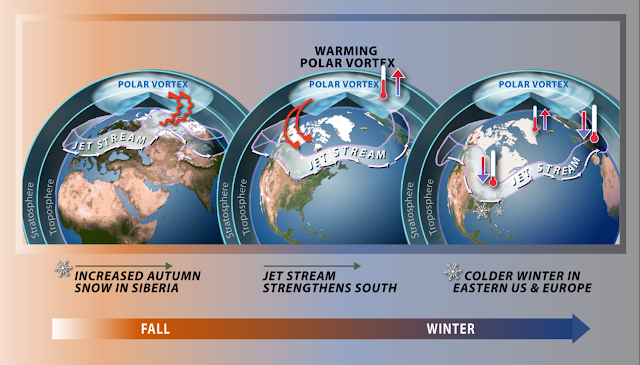 A polar vortex is an upper level low-pressure area lying near the Earth's pole. There are two polar vortices in the Earth's atmosphere, which overlie the North, and South Poles. Each polar vortex is a persistent, large-scale, low pressure zone that rotates counter-clockwise at the North Pole (called a cyclone), and clockwise at the South Pole.[discuss] The bases of the two polar vortices are located in the middle and upper troposphere and extend into the stratosphere. Beneath that lies a large mass of cold, dense arctic air. The vortices weaken and strengthen from year to year. When the vortex of the arctic is strong it is well defined, there is a single vortex and the arctic air is well contained; when weaker, which it generally is, it will break into two or more vortices; when very weak, the flow of arctic air becomes more disorganized and masses of cold arctic air can push equatorward, bringing with it a rapid and sharp temperature drop. The interface between the cold dry air mass of the pole and the warm moist air mass further south defines the location of the polar front. The polar front is centered, roughly at 60° latitude. A polar vortex strengthens in the winter and weakens in the summer due to its dependence on the temperature difference between the equator and the poles.[1] The vortices span less than 1,000 kilometers (620 miles) in diameter within which they rotate counter-clockwise in the Northern Hemisphere, and in a clockwise fashion in the Southern Hemisphere. As with other cyclones, their rotation is driven by the Coriolis effect.
When the polar vortex is strong, there is a single vortex with a jet stream that is "well constrained" near the polar front. When the northern vortex weakens, it separates into two or more vortices, the strongest of which are near Baffin Island, Canada and the other over northeast Siberia.[2] The Antarctic vortex of the Southern Hemisphere is a single low pressure zone that is found near the edge of the Ross ice shelf near 160 west longitude. When the polar vortex is strong, the mid-latitude Westerlies (winds at the surface level between 30° and 60° latitude from the west) increase in strength and are persistent. When the polar vortex is weak, high pressure zones of the mid latitudes may push poleward, moving the polar vortex, jet stream, and polar front equatorward. The jet stream is seen to "buckle" and deviate south. This rapidly brings cold dry air into contact with the warm, moist air of the mid latitudes, resulting in a rapid and dramatic change of weather known as a "cold snap".[3]
Bomb Cyclones.
And the latest hype is the 'Bomb Cyclone." Again another meteorological phenomena that occurs from time to time. Although winter storms or surface low pressure areas that "bomb" are rare and only occur every 25 to 30 years they are not unheard of. They fit the somewhat rare category but this meteorological phenomena like Polar Vortex have nothing to do with Climate Change or Global Warming. Nor are they caused by Climate Change. 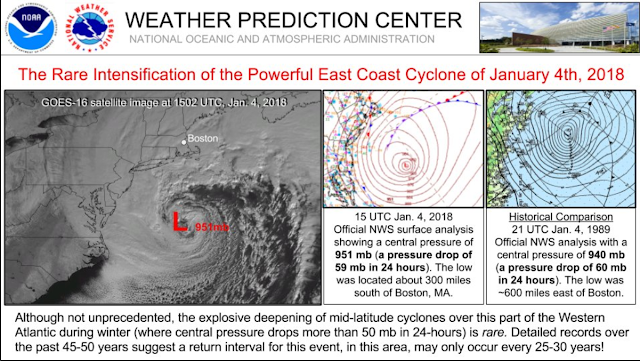 Curious about the historical context of this system impacting the East Coast? Interestingly, there was a similar system WPC found that dated back to--oddly enough--January 4, 1989.

Definition Of A Bomb Cyclone.
Explosive cyclogenesis (also referred to as a weather bomb,[1][2][3] meteorological bomb,[4] explosive development,[1] bomb cyclone[5][6] or bombogenesis[7][8][9]) refers in a strict sense to a rapidly deepening extratropical cyclonic low-pressure area. To enter this category, the central pressure of a depression at 60° latitude is required to decrease by 24 mbar (hPa) or more in 24 hours.[10][11]
This is a predominantly maritime, winter event,[10] but also occurs in continental settings.[12][13] This process is the extratropical equivalent of the tropical rapid deepening.

In the 1940s and 1950s, meteorologists at the Bergen School of Meteorology began informally calling some storms that grew over the sea "bombs" because they developed with a great ferocity rarely seen over land.[5]
By the 1970s, the terms "explosive cyclogenesis" and even "meteorological bombs" were being used by MIT professor Fred Sanders (building on work from the 1950s by Tor Bergeron), who brought the term into common usage in a 1980 article in the Monthly Weather Review.[5][10] In 1980, Sanders and his colleague John Gyakum defined a "bomb" as an extratropical cyclone that deepens by at least (24 sin φ/ sin 60°)mb in 24 hours, where φ represents latitude in degrees. This is based on the definition, standardised by Bergeron, for explosive development of a cyclone at 60°N as deepening by 24mb in 24 hours.[14] Sanders and Gyakum noted that an equivalent intensification is dependent on latitude: at the poles this would be a drop in pressure of 28 mb/24 hours, while at 25 degrees latitude it would be only 12 mb/24 hours. All these rates qualify for what Sanders and Gyakum called "1 bergeron".[10][12] 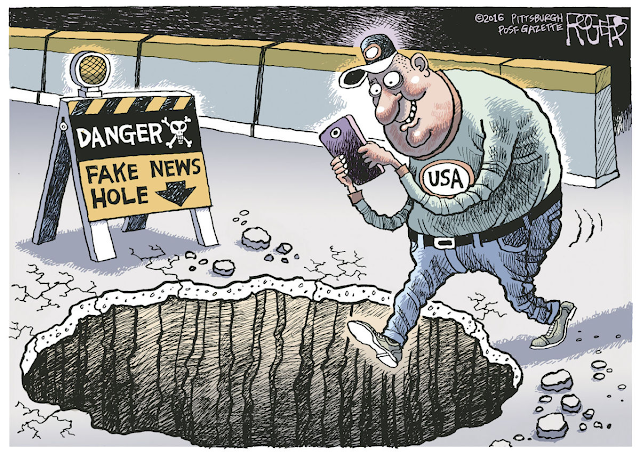 One of the benefits of our modern day world is the ability to access current events via our smart phones and social media. This is a mixed blessing. Just because a story is posted online does not guarantee that it is truthful or factual. Yet millions of people have been conditioned to believe what they read online whether its true or not. Regardless whether or not the story has been properly sourced and researched. Part of the problem I think is that many people just don't take the to research whatever lie is being published. Remember if its on the internet it has to be true. Too many people spend time reading what they see on their phones instead of digging through historic records and books to find the truth. Especially in the weather world and sadly the political world too. Our phones have made us lazy in some respects and very gullible.

Sadly this is the case in the world of weather and climatology. Many people today don't understand the difference between the two. Weather is not climate and climate is not weather. A fierce winter storm such as the one that just lashed the Eastern Seaboard from Florida to Maine does not, can not, and will not alter the planets climate. That is an absurd thought yet the media is rampant with stories that either attribute this storm to Climate Change or because of Climate Change. They won't give you the historic context of past winter storms that have been much worse. No the important thing is to sensationalize and hype the storm to get their ratings and views up! The truth is sacrificed often times.

Don't get me wrong I'm not trying to minimize the impacts of the recent historic cold outbreaks and this storm that dumped historic amounts of snow in places that normally don't see snow...and if so rarely if ever this much. Such as Florida, and the Georgia and Carolina Coastal areas.

This is weather folks. Extreme to a point yes, changing the planets climate or because of Climate Change...no. Weather has always been cyclic in nature. From time to time we see wild swings in these cycles. Like here in New Mexico and nearby West Texas where I live. We just experienced the overall warmest year on record. Ok. But I promise you that at some point in time this too will be broken. And our winter snow pack across the states mountains is a paltry bare nearly nonexistent nothing compared to average. If you must blame this on something how about blaming it on La Niña?

Or the Pacific Decadal Oscillation Cycles (PDO). Or how about both of these as well as a combination of other factors. By the way the Albuquerque National Weather Service Office correctly forecast our current warm and dry winter back in November...click on this link to view their forecast.

Weather Can Be & Is Extreme In New Mexico!
(Has Nothing To Do With Climate Change).

For those of you who have lived in New Mexico or West Texas for 40 or 50 years or more you know very well that we've had some really warm and dry winters in the past and some really cold and wet winters. The same can be said for the spring, summer and fall also. There are not too many states that have a more varied climate than New Mexico. We are not at the top of the list but as far as temperature extremes we fall into the top ten.

Now contrast those extreme low temperatures with the following. On June 29, 1918 the Artesia Climate Co-Op Station recorded a high temperature of 116ºF. This temperature stood the test of time for not only the highest officially recorded temperature in the county but for all of New Mexico for 76 years. That is until June 27, 1994 when the Waste Isolation Pilot Plant (WIPP) 15 miles east-southeast of Carlsbad shattered that record with a reading of 122ºF.

Talk about temperature extremes. The difference between WIPP's high of 122ºF and Artesia's low of -35ºF is 157º! Or if you include Galvilan's official low for the coldest in the state of -50ºF on February 1, 1951 then that's an incredible temperature spread of 172º!

Take A Look At How Below Zero Low Temps In Artesia. 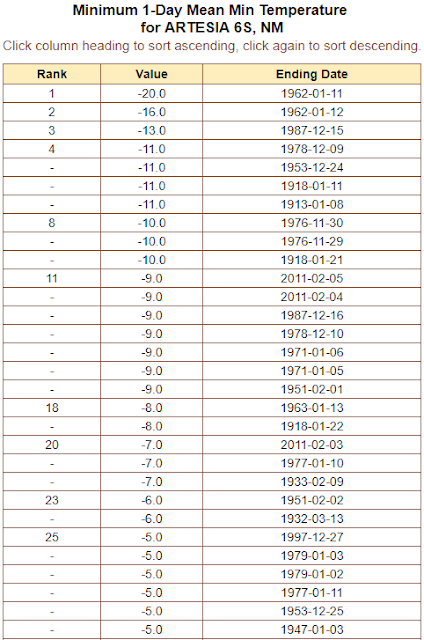 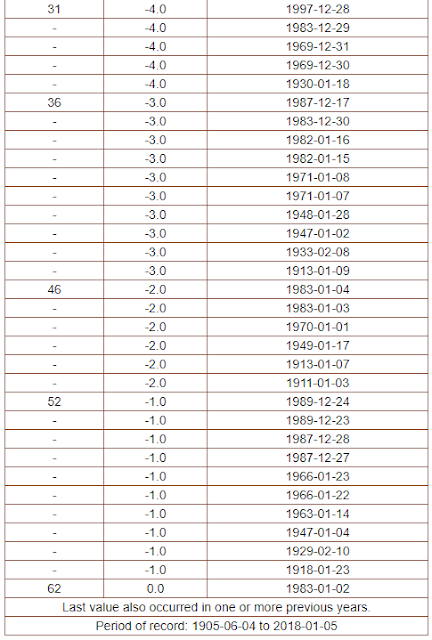 Note that the -35ºF recorded on February 8, 1933 has been conveniently omitted from this data set. But take a look at the true historical record via this link. Notice further down in my arcticle (via the link to the left) that Roswell's all time record low temperature of -29ºF recorded on February 13, 1905 has also been altered in present day records to -24ºF on January 11, 1962. A classic example of historical climate record tampering by those who are promoting the Climate Change Agenda because the truth does not support their lie! 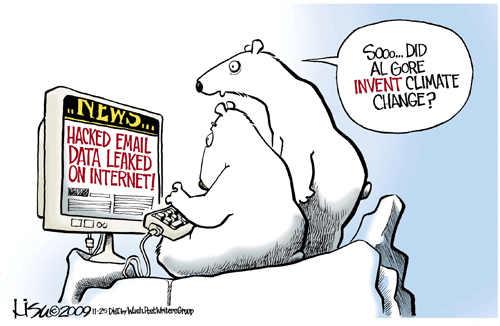 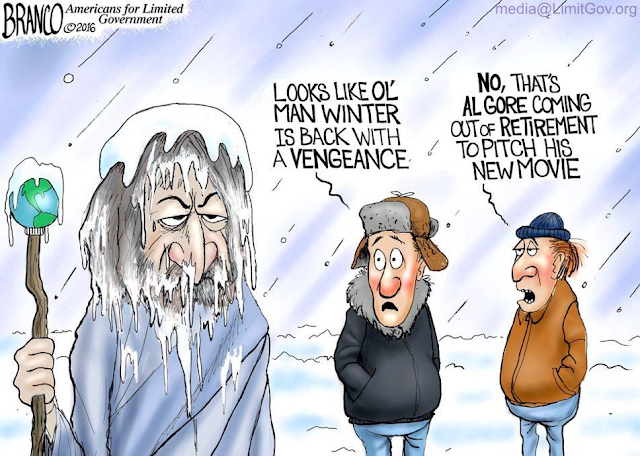 No, actually he didn't. But the man has gone over the top with his promoting of the Climate Change Agenda. This is a political agenda that started up in the 1970's and took off thereafter. Some of the very same folks who were screaming "Global Warming Agenda" in the 1970's are the very same who are pushing and promoting the Climate Change Agenda today. Remember it was first Global Warming and when then failed to win the vast majority of us over they changed it to Climate Change. When they still didn't achieve their goal they begin to alter historic climate and weather records to fit their narrative.

Common Sense Is A Threatened Attribute! 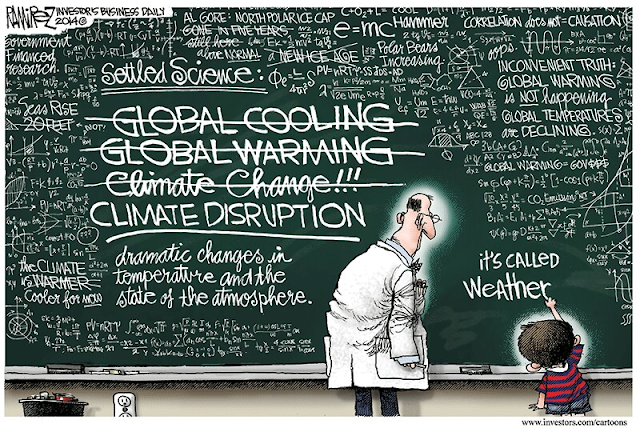