Numerous T-Storms - Heavy Rains - Flash Flooding Over The Next Week. 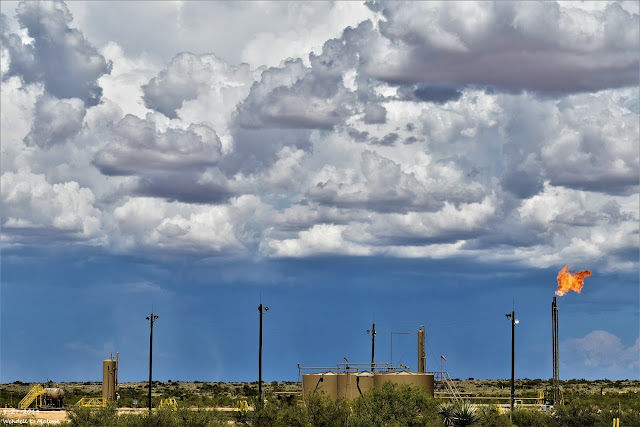 Reported 24-Hour Rainfall Totals.
(As Of 7 AM MDT This Saturday Morning). 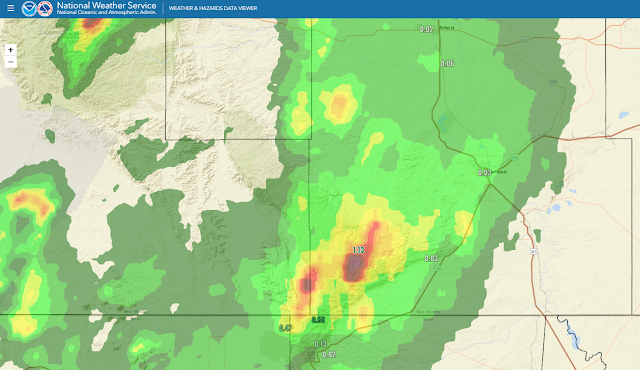 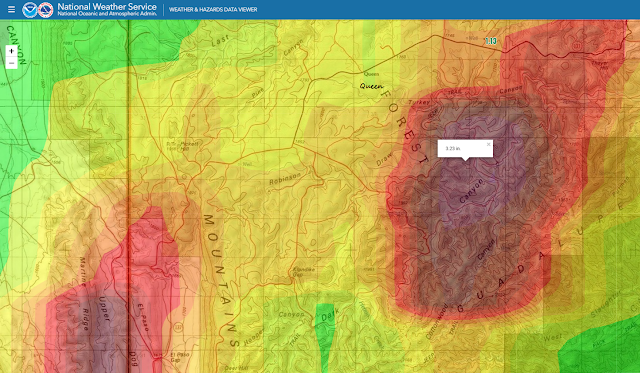 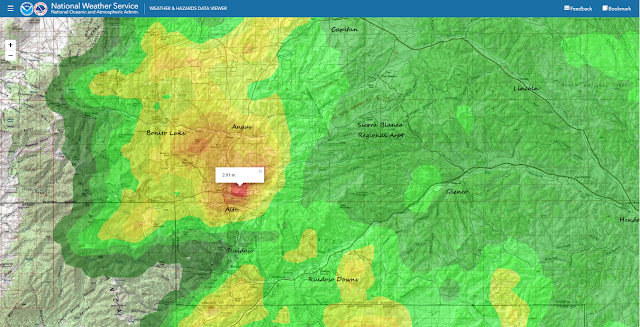 In yesterday's blog (click on the link highlighted to view it) I talked about heavy rainfall affecting the local area over the next week. Scattered thunderstorms erupted over the mountain and southeastern plains yesterday afternoon and continued into early this morning. A couple of spots picked up some hefty totals too with estimates as high as 3" in the El Paso Gap area southwest of Queen, and in Dark Canyon south-southeast of Queen near the junction of Cottonwood Canyon and Dark Canyon.

Another area that got slammed pretty good with 3" of rain was the Curtis Canyon area west of Mayhill between James Canyon and Cox Canyon. What has been reported online includes 1.68" from a Personal Weather Station (PWS) west of Mayhill and 1.13" at the Queen Raws. Both stations were outside of the heaviest rain cores.

The Alto area north of Ruidoso picked some heavy rain yesterday afternoon also with the CoCoRaHS Station located 1.6 miles NNE of Alto measuring 1.69" while as much as 2" was estimated to have fallen south of there. 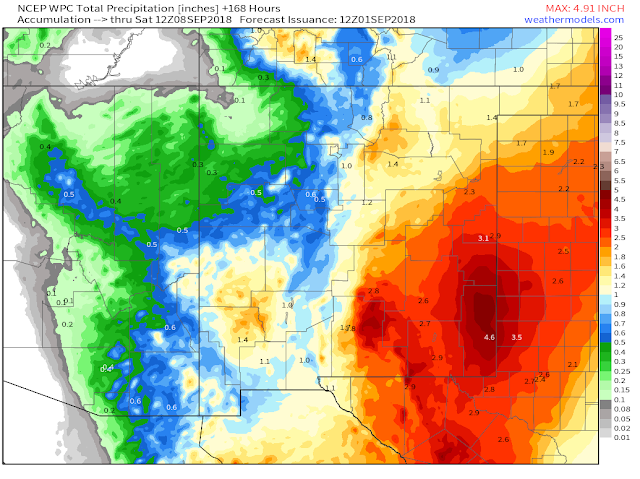 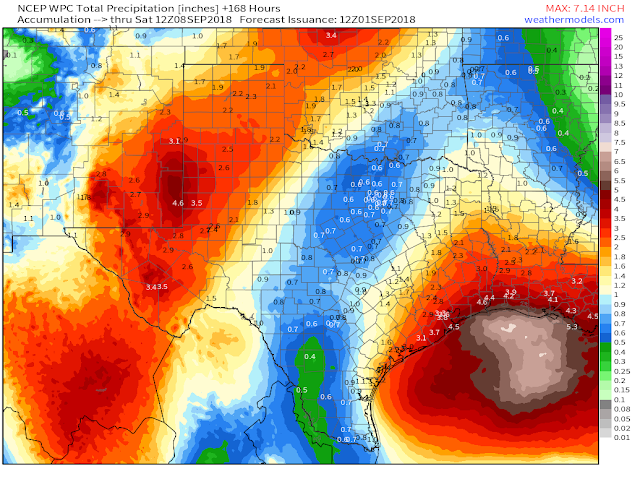 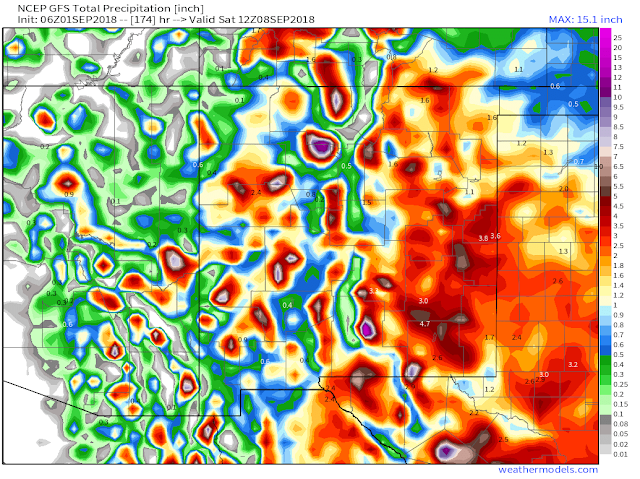 Valid Today Into Next Saturday Morning.

Last nights run of the US GFS computer forecast model just went nuts with its storm total rainfall forecasts for the local area. This model has been terrible all summer long and I almost hate to even post its forecasts. I say almost because when dealing with subtropical air masses combined with a mid-level trough and a couple of cold fronts in September in this part of New Mexico you can see some impressive storm total rainfall amounts. Historically September is our wettest month of the year. Past years have seen multi-day storm events dump as much as 10" to 30" in isolated areas in Southeastern New Mexico and the nearby Guadalupe, Sacramento, and Capitan Mountains.

Thus the theme today into the middle of next week. No at this time I am not saying that we are going to repeat the flash flooding events of September 2013 and 2014. What I am pointing out is that historically its amazing how much rain can and has fallen locally this time of the year. For those of you who are new to Southeastern New Mexico please take note. This is flash flood heaven when it rains for days in a row and if that rain is heavy and falls over the same areas. Especially if this happens to our southwest through northwest over and near the Guadalupe, Sacramento, and Capitan Mountains. With heavy rains forecast locally over the next week the concern for flash flooding is high so stay weather alert and be ready to move to higher ground should flooding affect your location.

Flash flooding has claimed many lives locally historically. Never drive into flooded arroyos especially at night when its impossible to tell the depth of the flood waters flowing over a flooded roadway. Street flooding in our towns can be as equally dangerous. Remember...Turn Around - Don't Drown!

Thunderstorms are forecast by the models to be rather numerous over the next week. This will produce a wide swath of beneficial soaking rains that this countryside desperately needs. Unfortunately some of this rain will fall too fast and heavy which will result in localized flash flooding. Storm totals over the next seven days could add up to be rather impressive in isolated spots with some totals I think in the 4" to 6" range. Widespread totals of 2" to 4" still appear on track for most locals.

Take A Look Back At September 2014 As An Example. 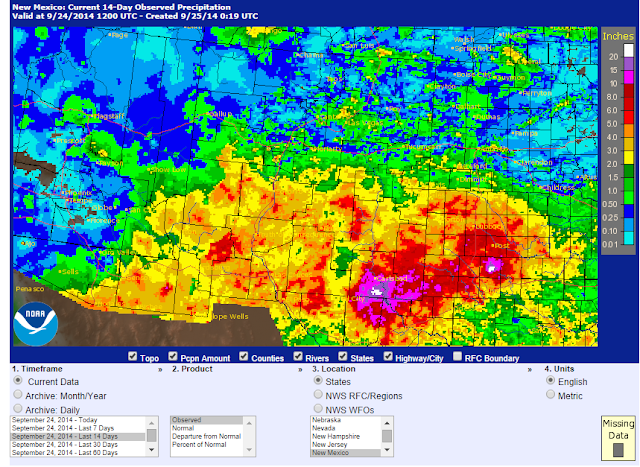 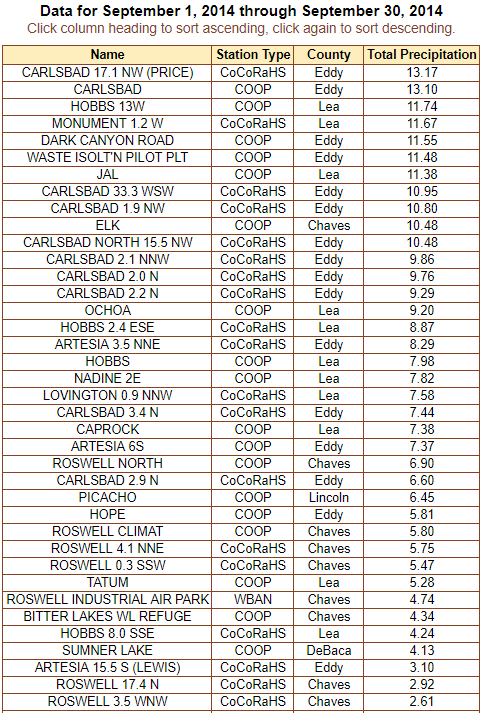 Not only do flash floods occur on the east side of our mountains they also occur on the western slopes too. 4" of rain fell west of Alamogordo reportedly in 40 minutes creating the results in the video above.
See more of my videos by clicking on My Youtube Channel Link.

The Truth Is Stranger Than Fiction!
at Saturday, September 01, 2018