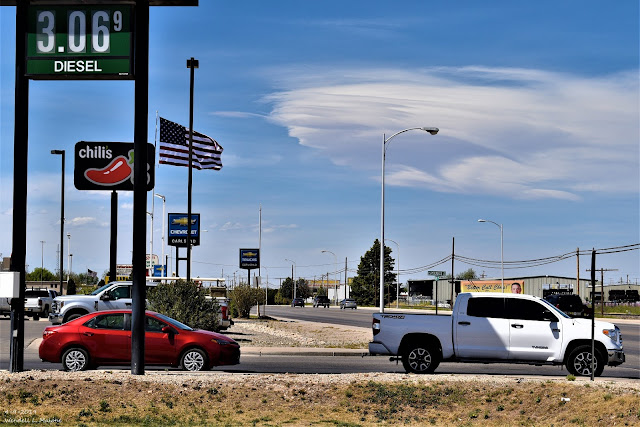 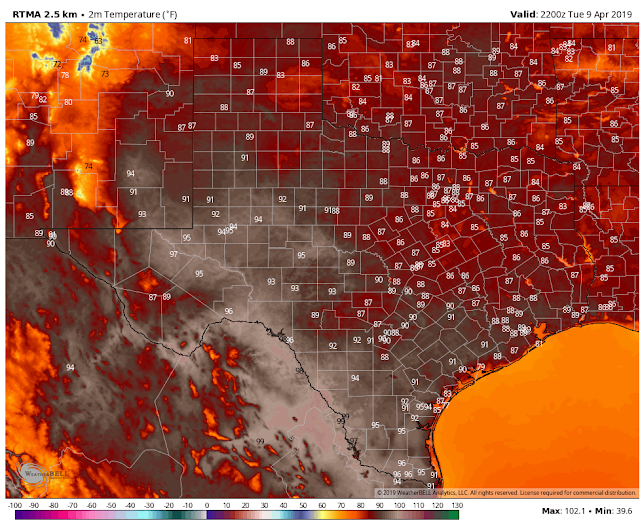 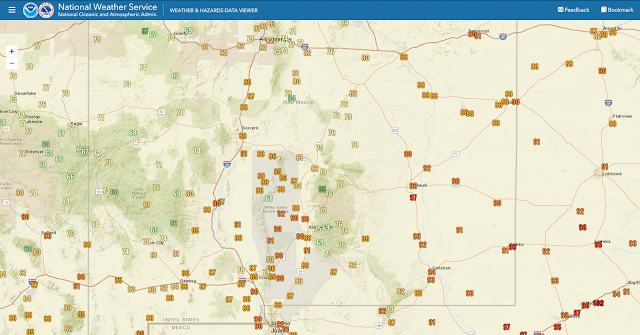 Wow...as of 4 PM MDT the Roswell Airport ASOS had managed to climb up to at least 97ºF this afternoon! 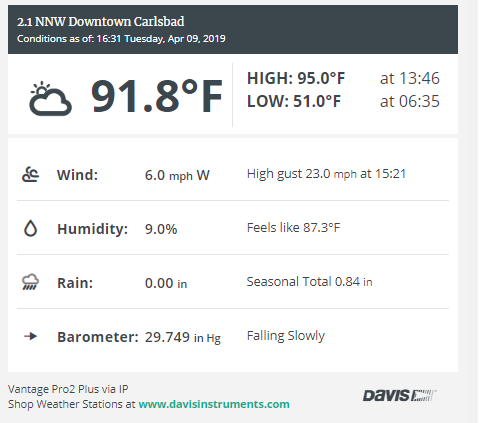 Meanwhile my Davis Vantage Pro2+ Personal Weather Station located in my backyard in northwestern Carlsbad came close with a high of 95ºF. 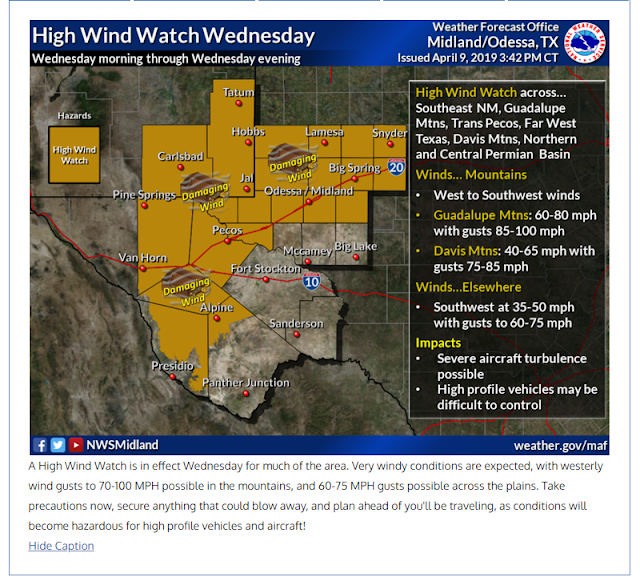 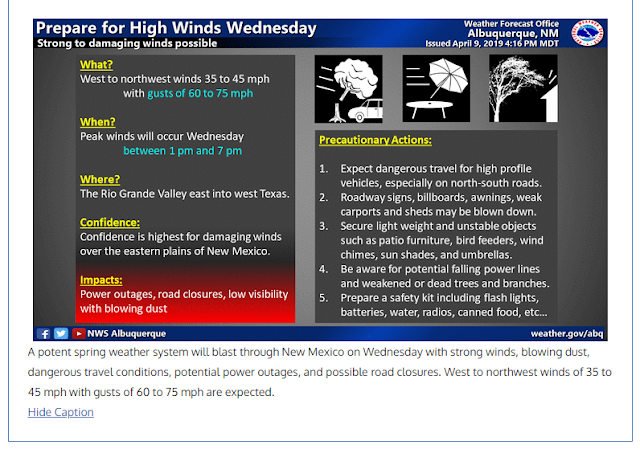 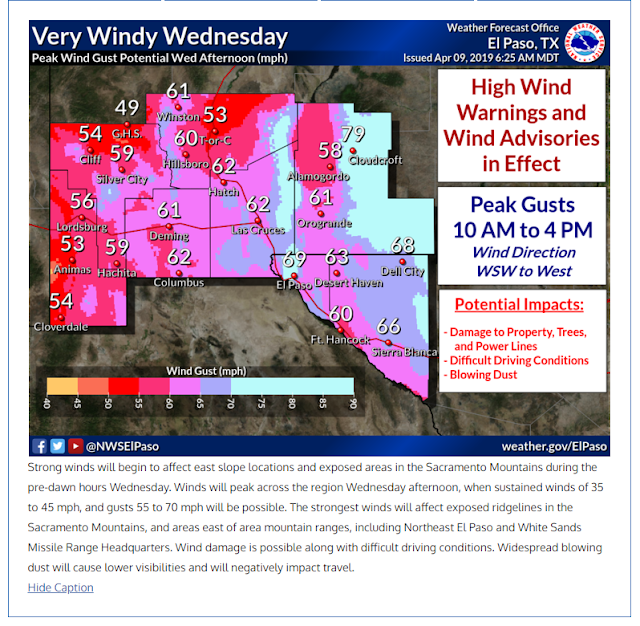 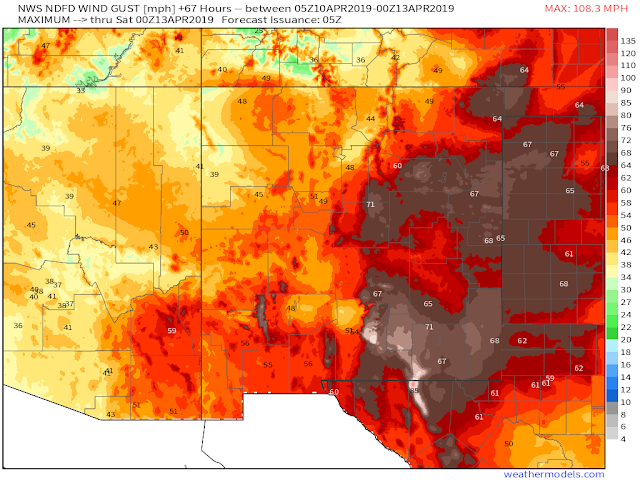 Note The Peak Gust Of 108 MPH Forecast For The Guadalupe Pass Area.

A strong closed low is forecast to swing across Colorado on Wednesday. Given the northerly track of this potent upper level storm this means we get sideswiped with the bottom of the storm which means high winds.

Southwest to westerly winds will increase to sustained speeds of 60 to 80 mph with gusts near 100 mph Wednesday!

Southwesterly winds will become sustained at 35 to 50 mph with gusts around 60 to 75 mph Wednesday!

Southwesterly winds will become sustained at 40 to 50 mph with gusts near 60 t0 75 mph Wednesday!

Southwesterly winds will become sustained at 40 to 55 mph with gusts near 60 to 75 mph Wednesday!

Southwest to westerly winds will become sustained at 40 to 45 mph with gusts near 60 to 70 mph Wednesday!

Blowing dust will likely become widespread in the afternoon with the visibility dropping below 3 miles across the area. Travel upon local highways and roadways may be impacted in some locations due to the widespread blowing dust.

During the higher southwesterly to westerly wind gusts there may be sudden drops in the visibility down to near zero with little to no advanced warning in some locations. This will be especially true over and near orchards with exposed bare ground, freshly plowed or open farmlands, fields, and construction sites.

Remember these areas pose a high danger to anyone traveling through them should they encounter these blinding clouds of dust. The area has a history of multiple vehicle accidents with injuries and fatalities during these major high wind and blowing dust events. Multi-vehicle pileups have occurred several times in the past twenty years during our more high end high wind and blowing dust events.

High winds may also pose travel problems on some of our local highways with the possibility of some of them becoming closed due to the high winds and blowing dust.

This means that any wild fire, range fire, forest fire, or grass fires that break out Wednesday will have the potential be long lived and may rapidly spread and grow and will be extremely difficult to control or put out.

Blinding clouds of smoke could possibly combine with the blowing dust and drop the visibility on some local roadways to zero should a fire break out near a road or highway. Any outdoor activity that may involve the use or create sparks or flames is not recommended on Wednesday.

Our local area has a history of destructive wild fires that have burned thousands of acres of grasslands and forest lands. Homes and other properties have been lost on multiple occasions and tragically even some lives. Livestock and wildlife unable to outrun the fires have also been lost.