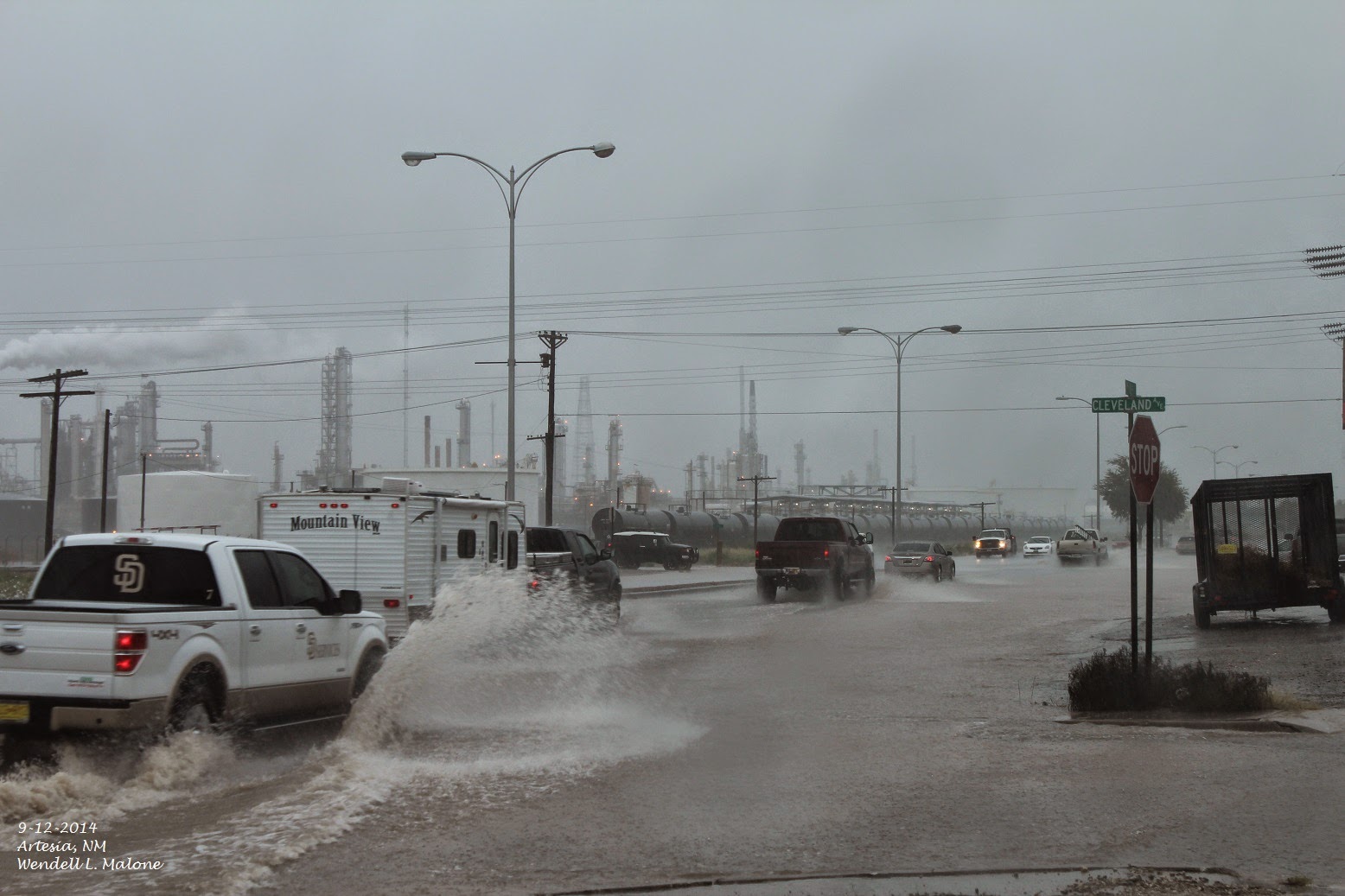 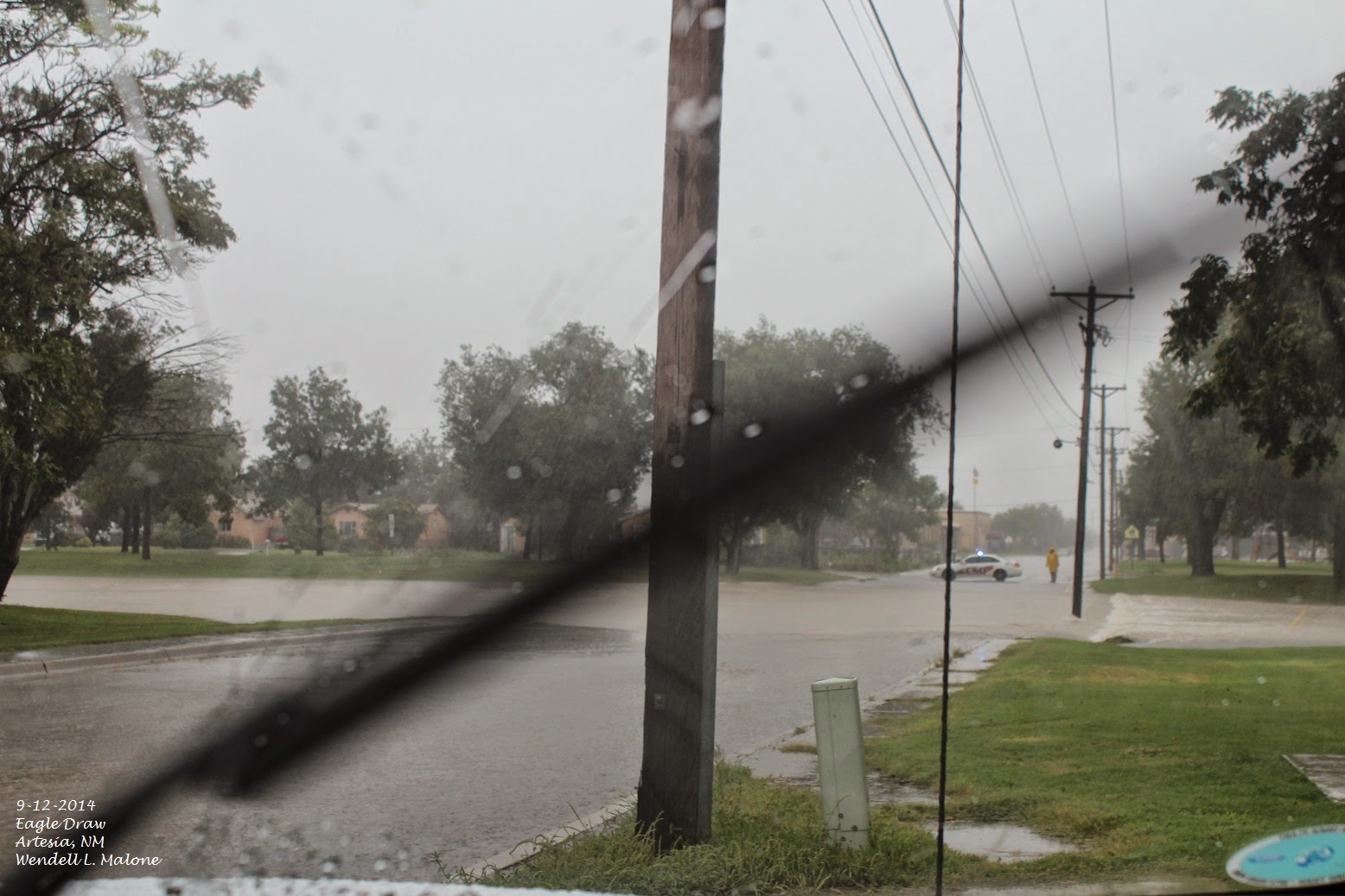 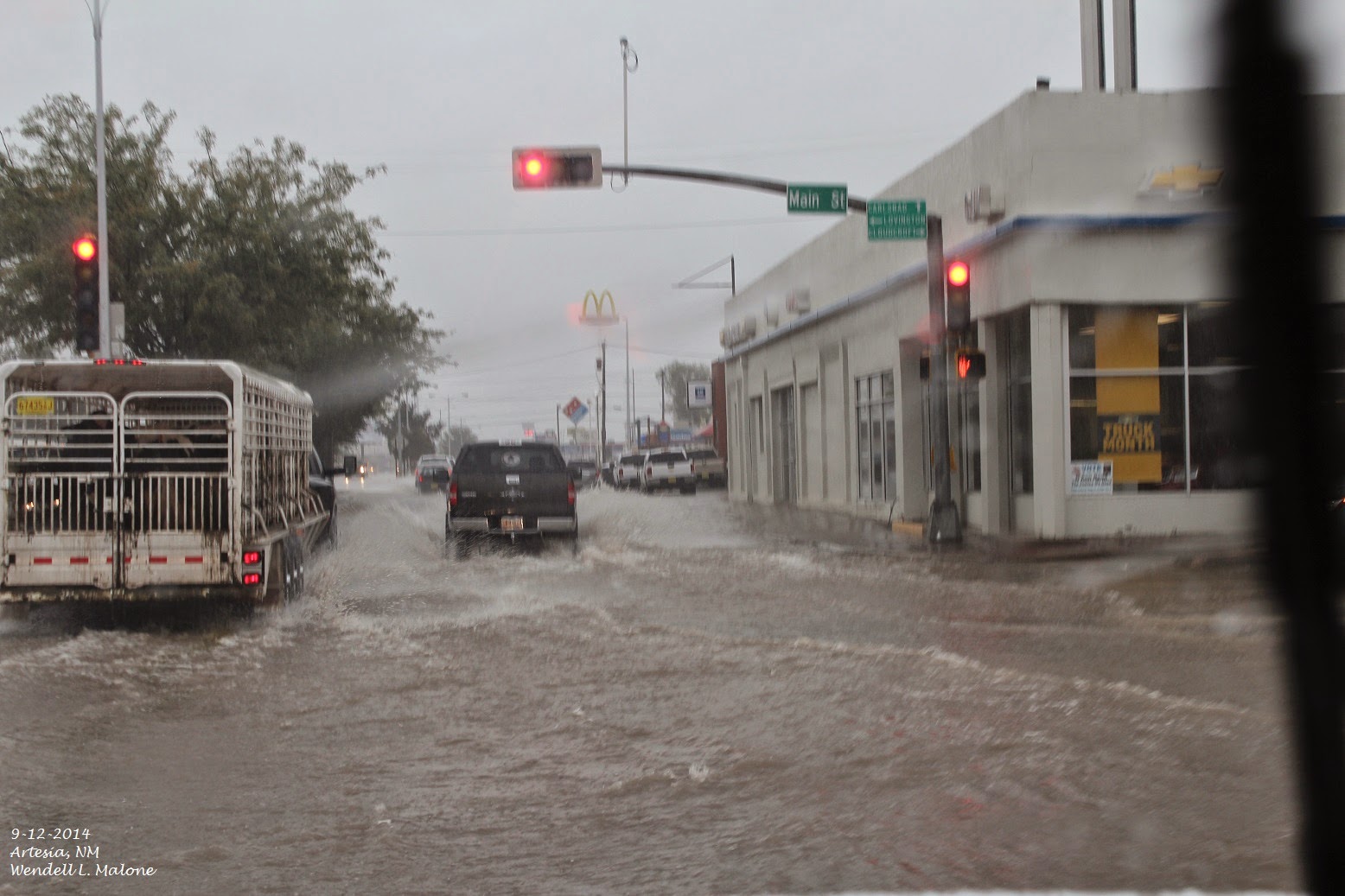 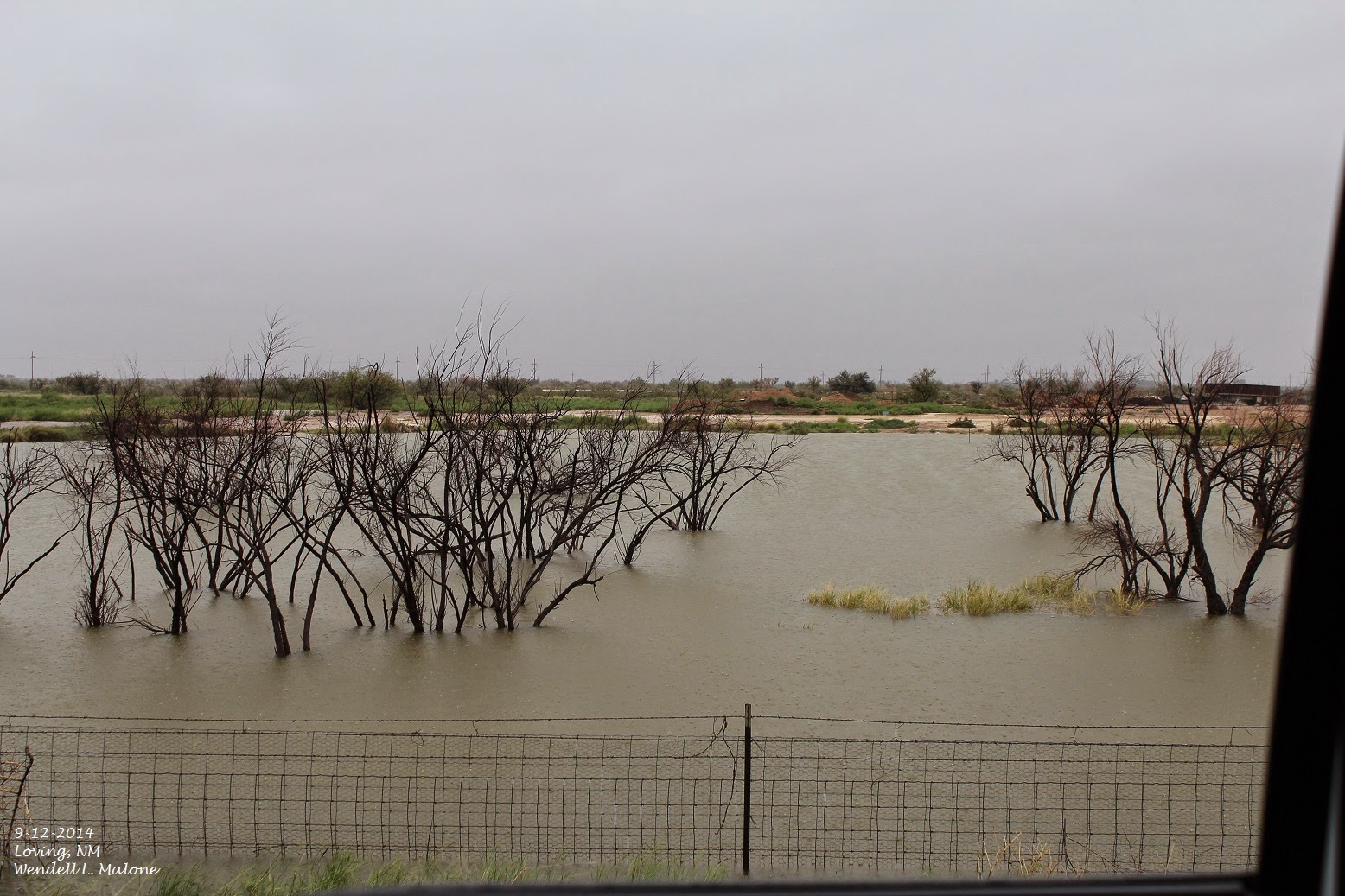 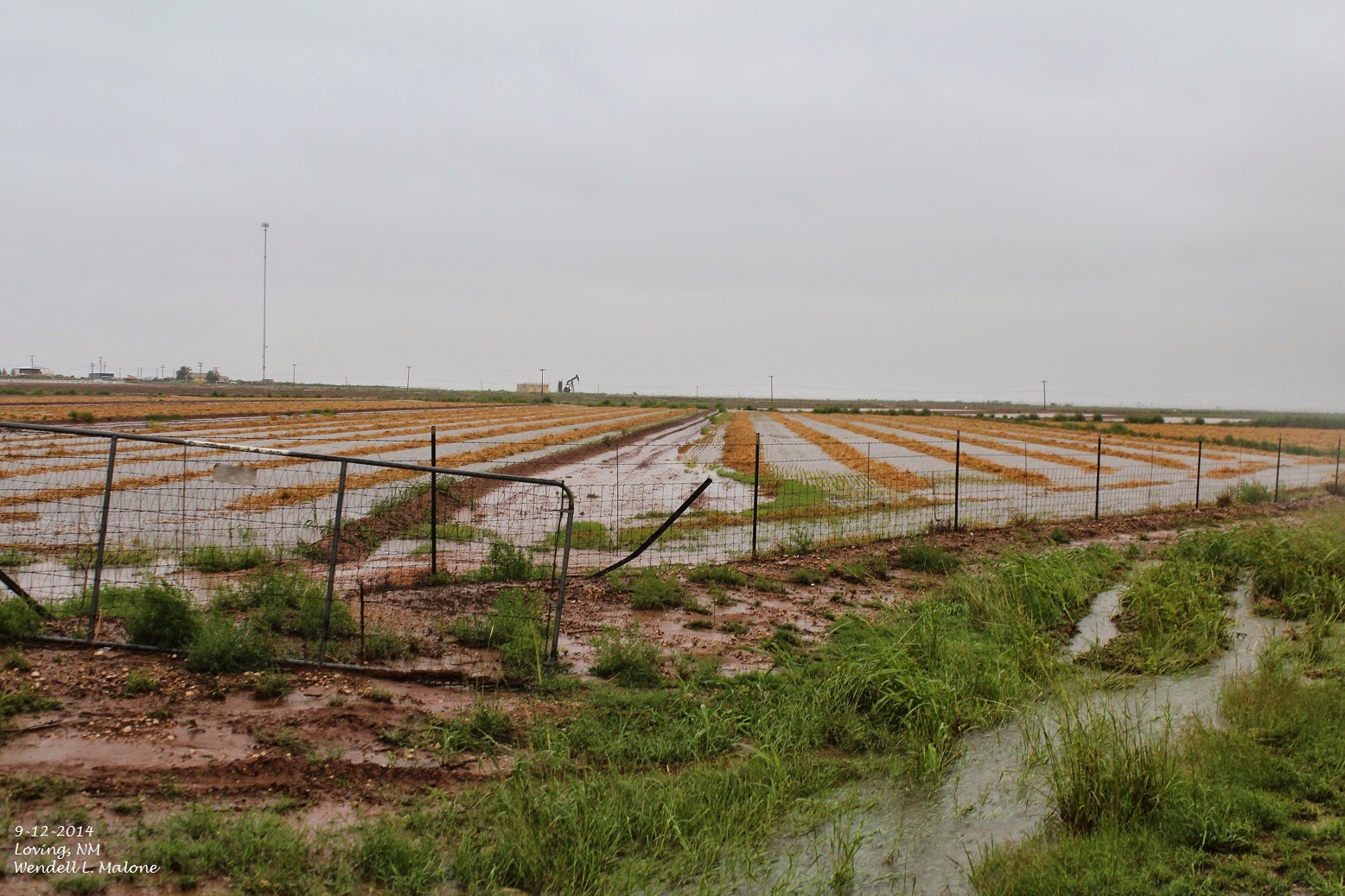 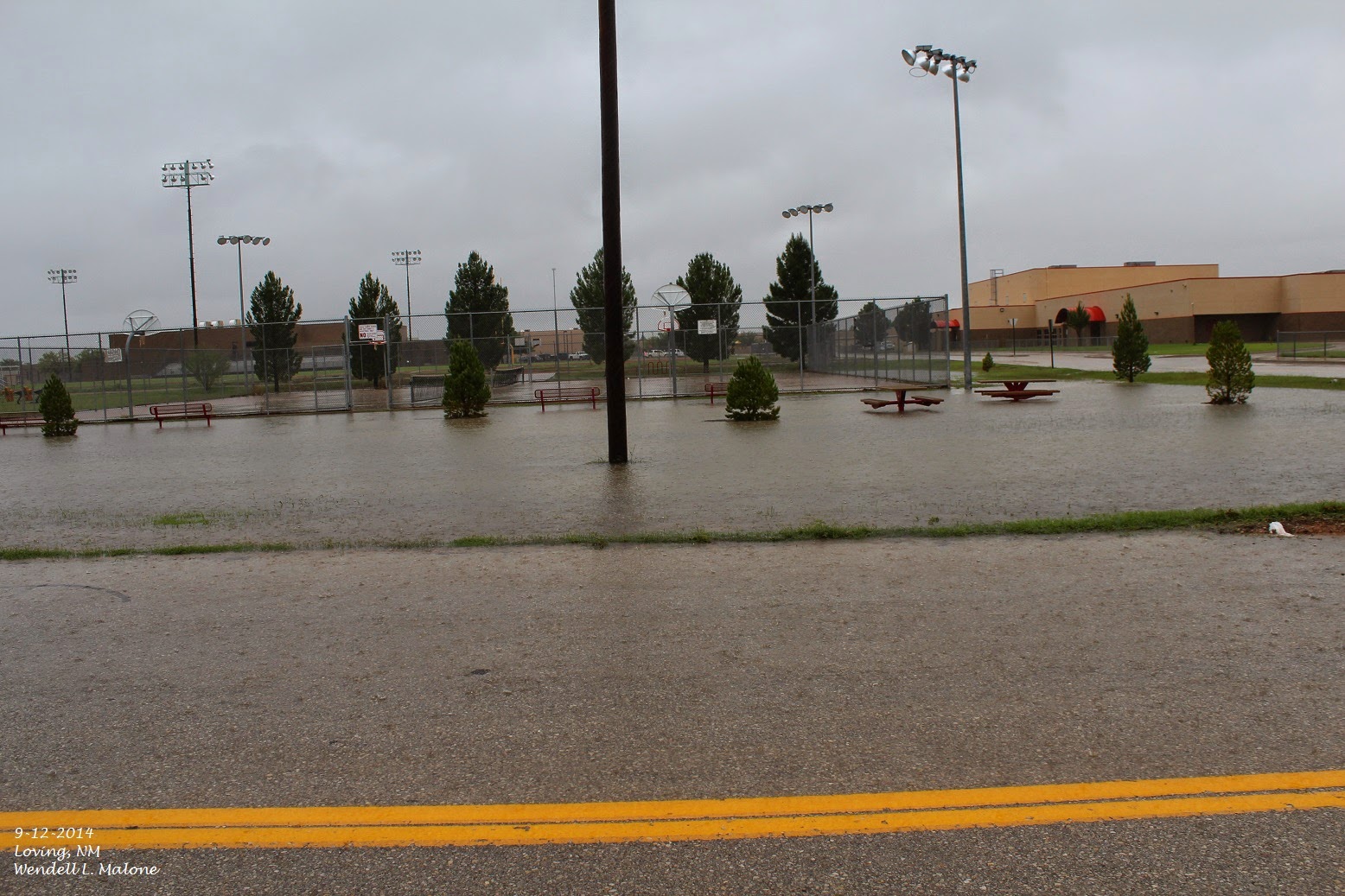 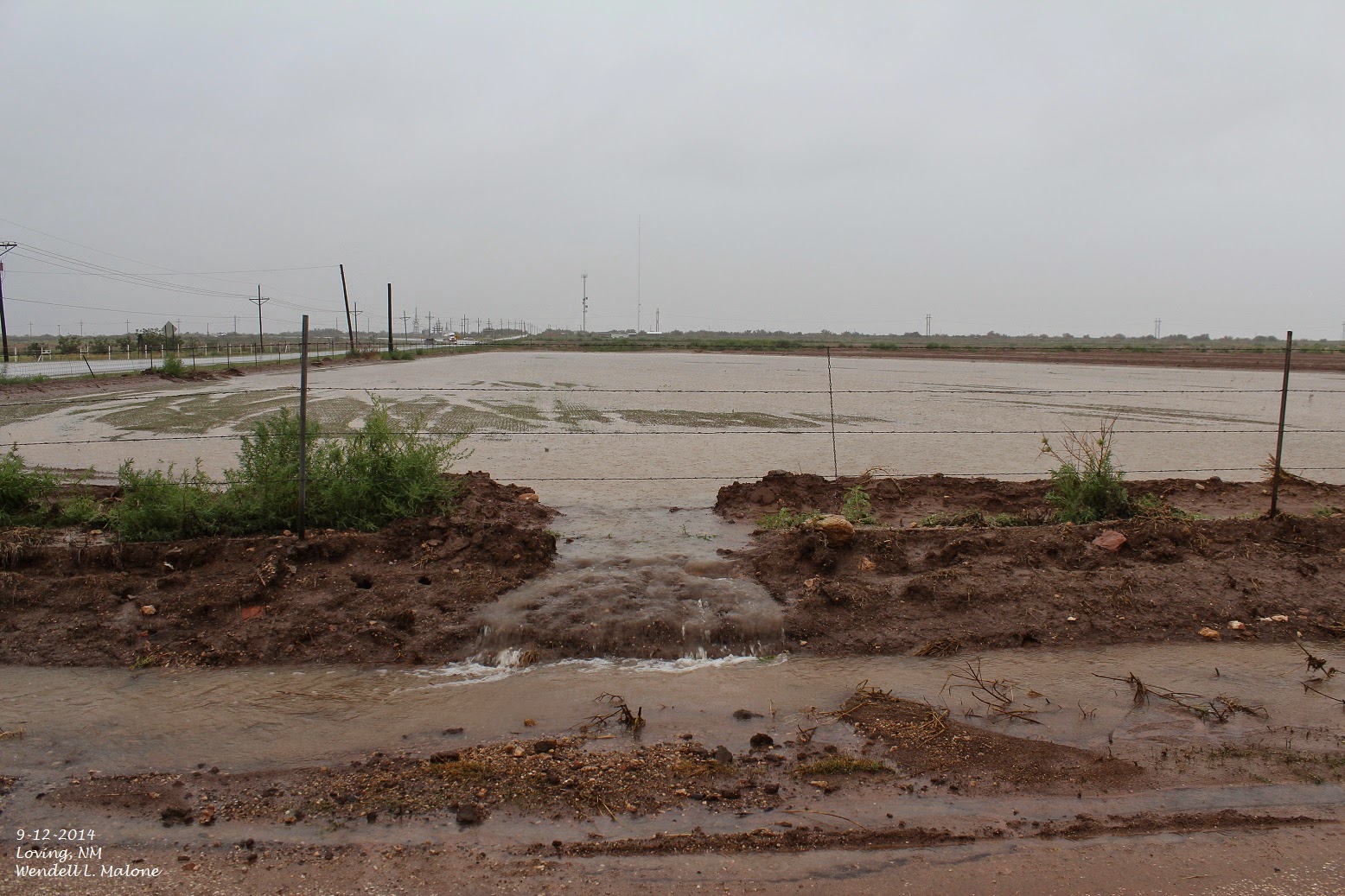 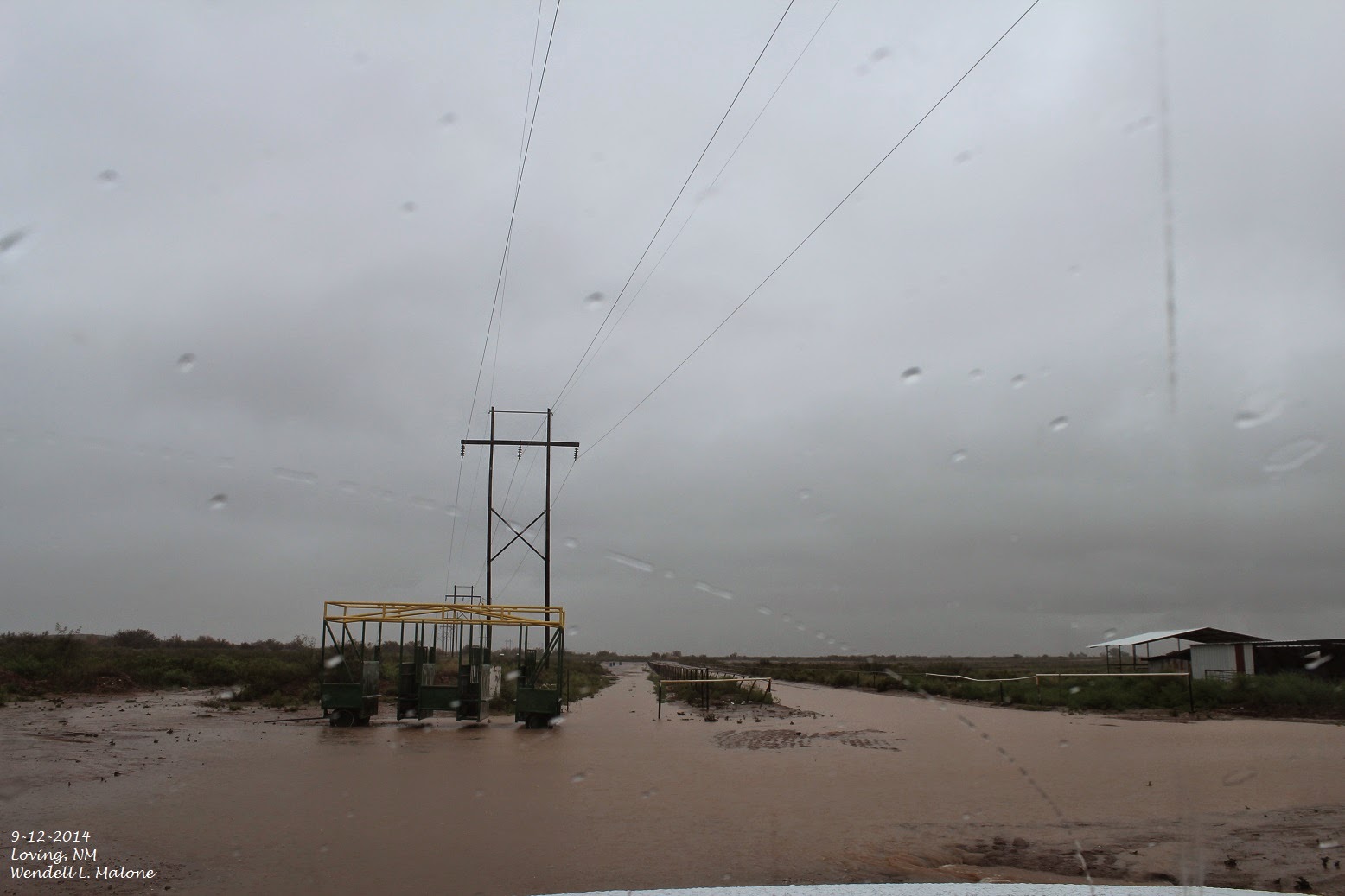 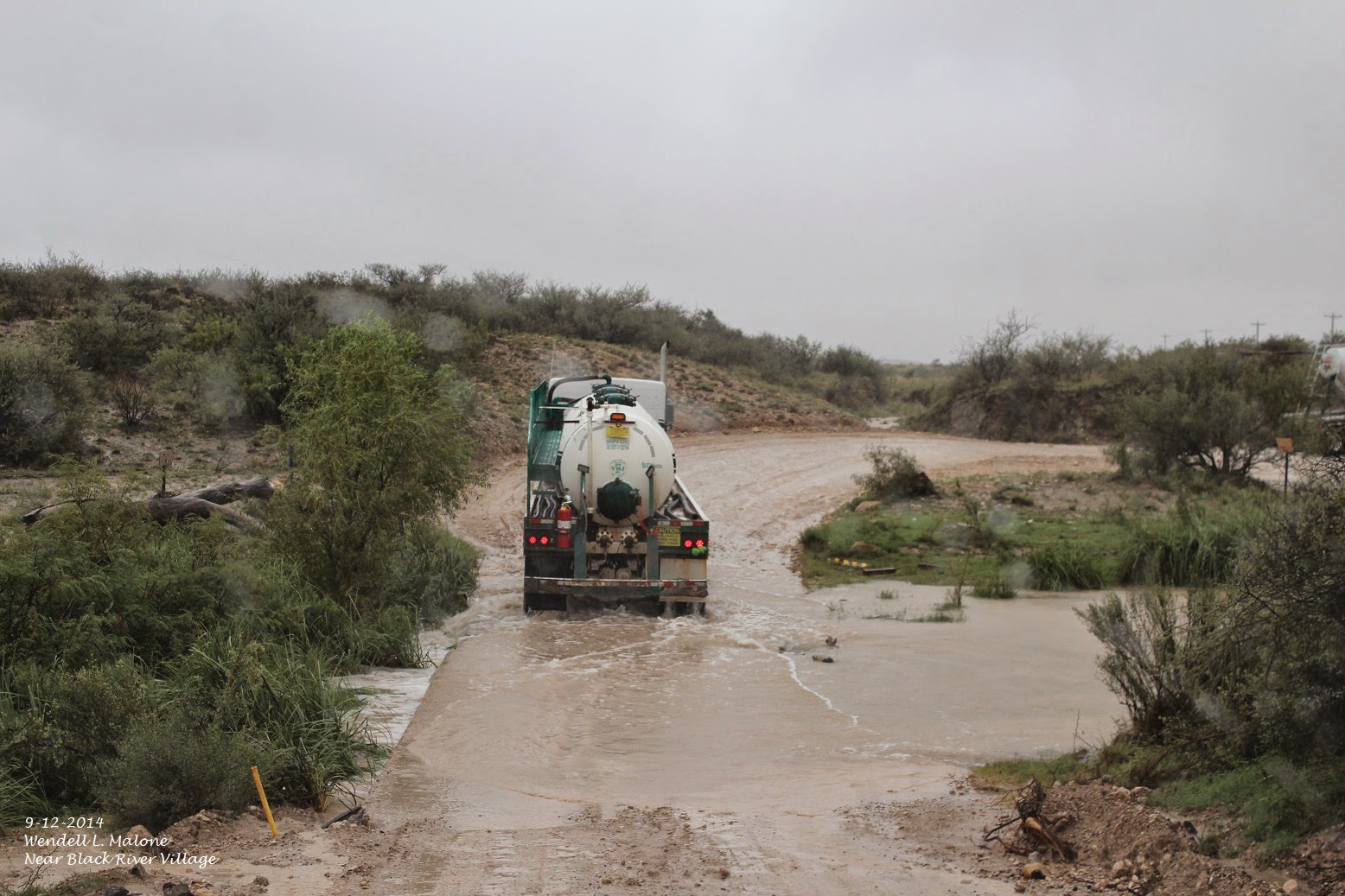 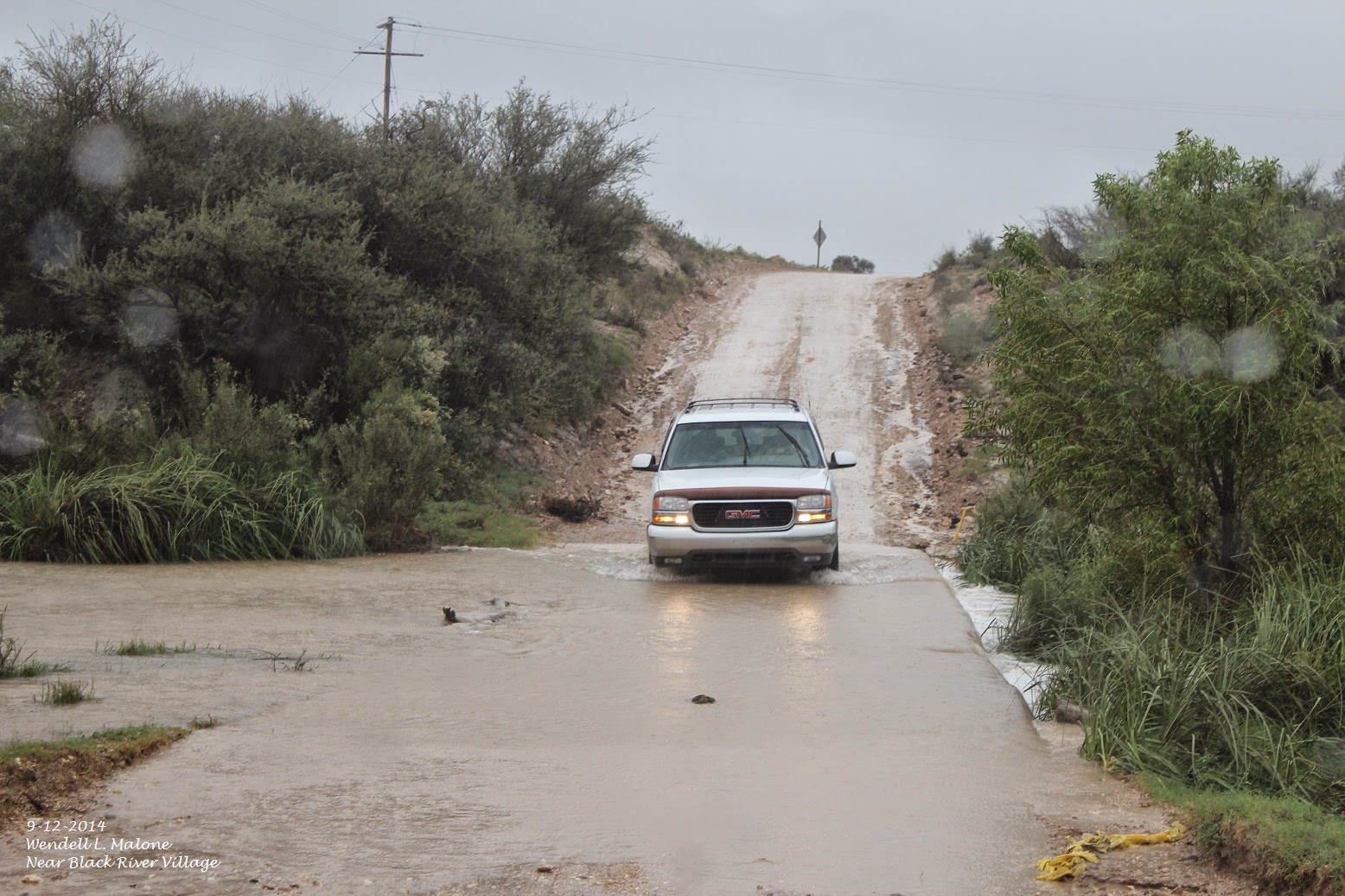 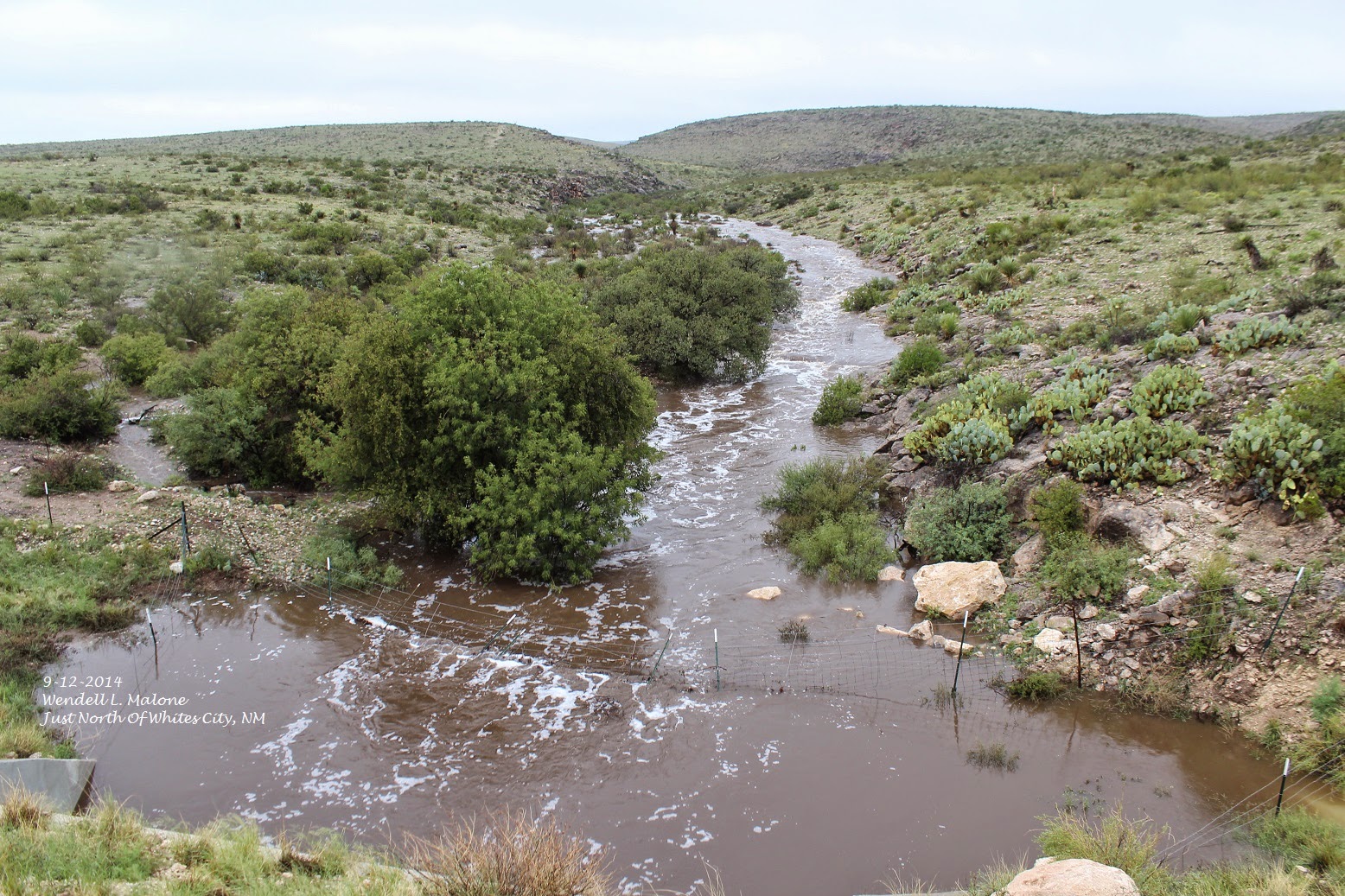 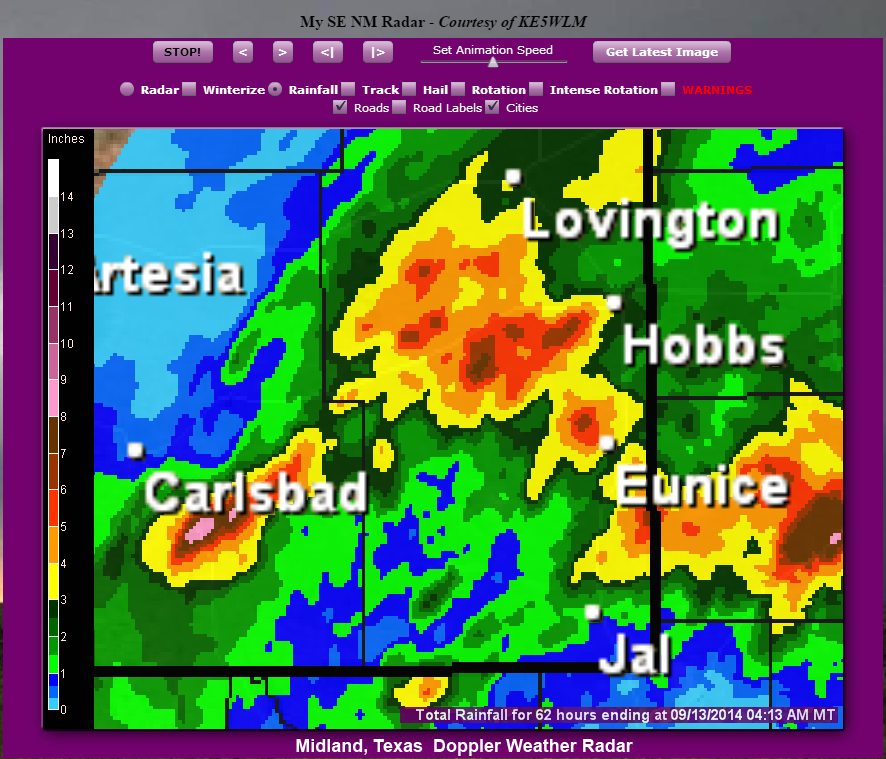 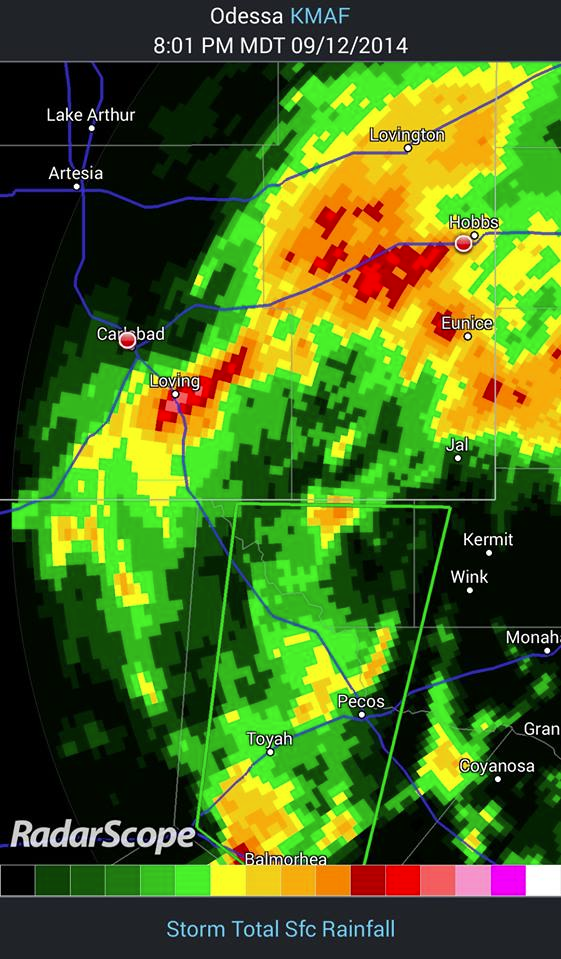 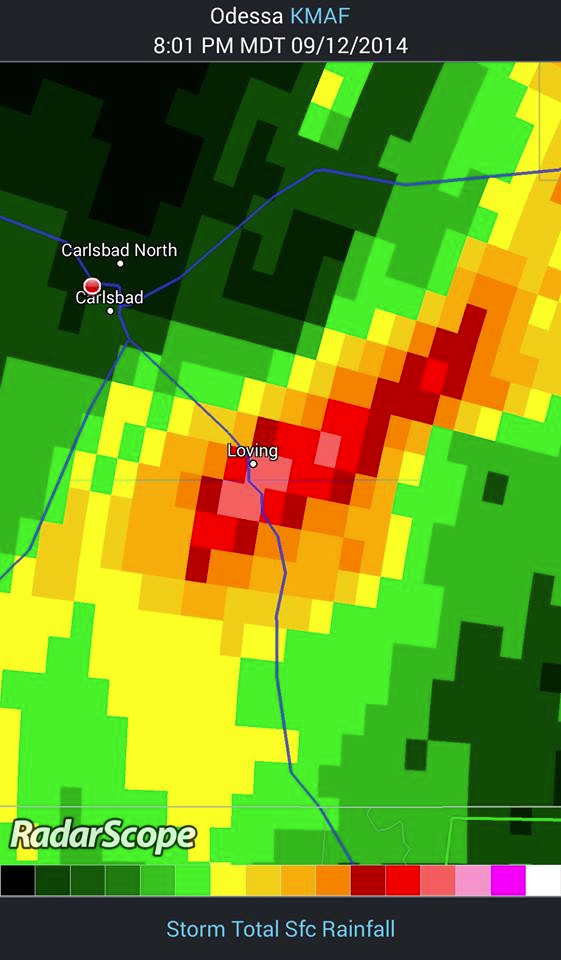 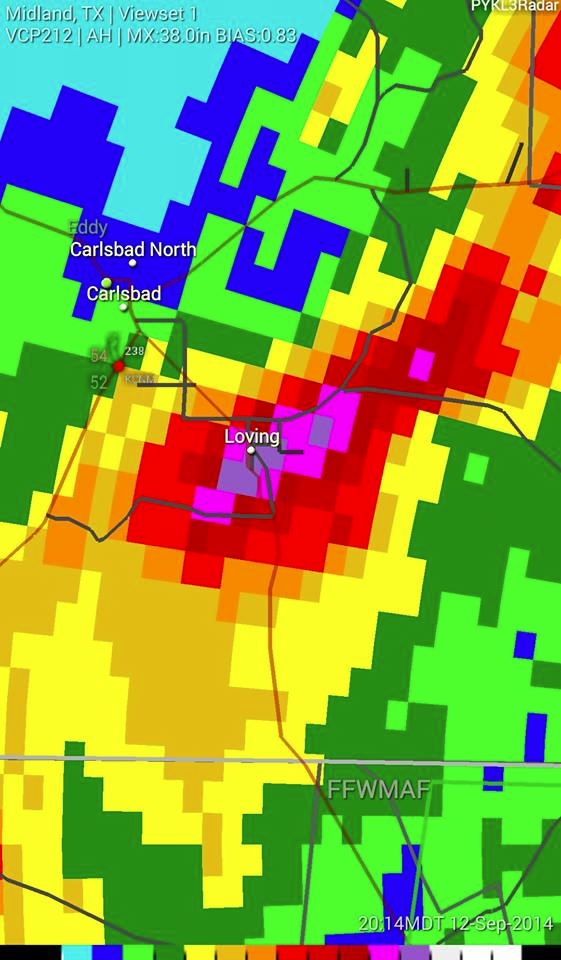 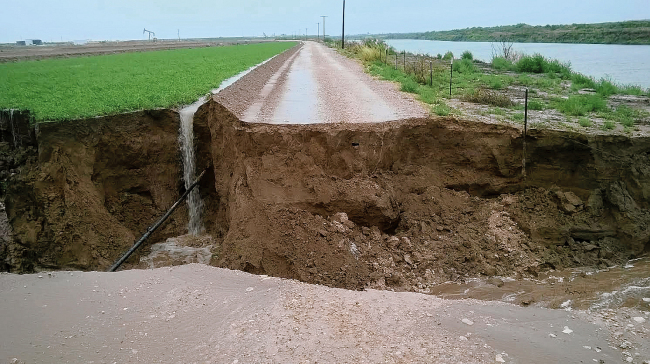 Storm Causes $8 Million In Damages To Crops In Loving/Malaga.

This Event Will Go Down As Being Historical.

A rather remarkable 10.00" of rain fall in the Loving area Friday night into Saturday morning. Given that the long term (1894-2014) climate records for the local area only indicate 24 hour maximum rainfall totals for Roswell, Artesia, and Carlsbad in the 5.00" range. Our long term rainfall average for the Pecos Valley is 12.00".

A historic rain event for the Guadalupe Mountains from September 9th-13th, 2013. 15.76" of rain was recorded during this period at the Pine Springs, GUMO mesonet station near the National Park Visitor Center.

Flash flooding occurred in the Dark Canyon, Rocky Arroyo and Black River basins on the 12th with many localized areas of high water along the arroyo's on the north side of the Guadalupe Mountains.

An impressive fourteen-foot rise of water on the Dark Canyon when it reached Carlsbad, New Mexico creating some damage in the city to low-lying areas...along with some welcome water in the Pecos River Basin down to Red Bluff Reservoir.

I have a summary from the New Mexico State Climatologist in 1941 that claims that 17.00" of rain fell in 24 hours at the Dark Canyon Lookout Tower southwest of Queen. The rain gauge reportedly fell over due to the extremely wet ground and the final total was never known. The resultant flash flood that occurred along the Dark Canyon watershed was unbelievable. At least 20 people died in the Carlsbad area during the flooding along Dark Canyon in May 1941 and September 1941.See some of the photos of that flood in Carlsbad here.

I've been watching, chasing, tracking, observing and recording our local weather since I was a kid back in the 1960's. I've had several of the old time ranchers and farmers tell me through the years that they've seen 24 hour totals of 20.00" or more in the Guadalupe's and the Sacramento's. Its not a common occurrence but it happens occasionally. When it does devastating flash flooding is a result. More often than not these types of events are associated with remnant moisture from dying Hurricanes in the Eastern Pacific Ocean or the Gulf of Mexico that move inland into Northern Mexico, and then over Southeastern New Mexico. When southward moving cold front interact with this remnant tropical moisture incredibly heavy rainfall can occur.


Most of us alive today are unlikely to ever experience such an extreme rainfall event such as we saw in Loving this past Friday night into Saturday. This will be a story to tell you grandchildren about.