Climate Of Freedom - We've Been Lied To!

Al Gore Gave His Side of the Story...
"Climate change has been one of the most controversial topics over the last two decades.  Al Gore’s An Inconvenient Truth told us that we were destroying our world with catastrophic man made climate change.  The documentary set records and won awards, including a Nobel Prize for Gore.  Since the film’s production, Gore has continued his mantra of doom.
Yet, in spite of all the noise, there hasn't been any global warming in over 18 years.  Could there be an ulterior motive for the incessant cries that the world as we know it will quite literally burn up?  What if someone were to embark upon a Pilgrimage of Truth Against the Profiteers of Doom, and exposed Al Gore and his minions for what they are–money hungry Communists who wish to change our way of life, forever?"

Now it's time for the Truth.
There hasn't been any Global Warming for over 18 years, yet Al and his friends at the UN keep wanting us to give up more of our money and freedoms to fight what they now call "Climate Change."  Could it be that there is an ulterior motive for their incessant cries that the world is burning up?
Climate of Freedom is an upcoming feature length documentary film set for theatrical release in September 2015.  Starring world renowned Climate Change expert Lord Christopher Monckton, the film sheds light on the intentions of the United Nations Intergovernmental Panel on Climate Change (IPCC) and shows how they plan to use false science and fear mongering to create a de facto world government.  Lord Monckton will combine interviews with top scientific experts, with humor, facts, and a bit of fun to show the truth about Global Warming and the UN’s desire to subjugate the West to its tyranny.
----------------------------------------------------------------------
We've Been Lied To!

Just how many people do you know that really care about the Climate Change Debate? I can count the ones I know on one hand. Few people really understand what is at stake with this issue. Most simply don't care because they are not experiencing the consequences of it. To them weather is what we have every day, and it always changes, so why worry about it. Climate is something that happened in the past and we can't change it so why worry about it.

Little do people realize that this is not about the weather or the climate. Remember: Weather Is Not Climate & Climate Is Not Weather. This is about something bigger. We've been purposely lied too by our government and the so called experts for a long time...and most of us have believed the lie.

Man-Made Global Warming (AGW) is the biggest lie that has ever been forced upon mankind say some. There has been a pause in the rise of Global temperatures for 18 years now. What really is happening will be far scarier than Global Warming. Many reputable scientists are sounding the alarm that we are at the doorstep to the start of another Little Ice Age. If history is a lesson not to be forgotten then we are in trouble. While billions are being fed the "Global Warming/Climate Change Propaganda, there lurks on our horizon a reality check that will have far reaching and dire consequences upon humanity over the next 30 -70 years.

This (the video above) is an excellent review of the Last Little Ice Age that occurred during the Maunder (1645 - 1715) & Dalton (1790 - 1830-1860?) Solar Minimums. However I do not agree with the summary at the end of the movie that its Man-Made Global Warming that will throw the planet into another Little Ice Age. What will do this is a combination of things mostly centered on the sunspot cycle and our sun's dimming. Here's another good article to read:"Its The Sun Stupid."

I'm currently reading two books on this subject written by John L. Casey. One is "Cold Sun" and the other is "Dark Winter." I highly recommend both books. They are eye openers and will help you understand that the phase we are entering with the sun is a natural process that has happened many times before and will continue for far longer than we can image. Another wake-up book concerning mans inability to try and mix politics, weather, and or climate is: Rising Tide - The Great Mississippi Flood Of 1927 And How It Changed America" by John M. Barry. Even after Hurricane Katrina we still have the absurd notion that we can control the outcome of the impacts of Hurricanes and flooding on the Mississippi River. Again we have forgotten history and are doomed to repeat it!

Our sun is going to sleep at an alarming rate! Many respected and leading scientists and climatologists around the Globe are paying attention to this...try to sound the alarm and wake people up. A new paper by solar physicist Habibullo Abdussamatov predicts the current lull in solar activity will continue and lead to a new Little Ice Age within the next 30 years. 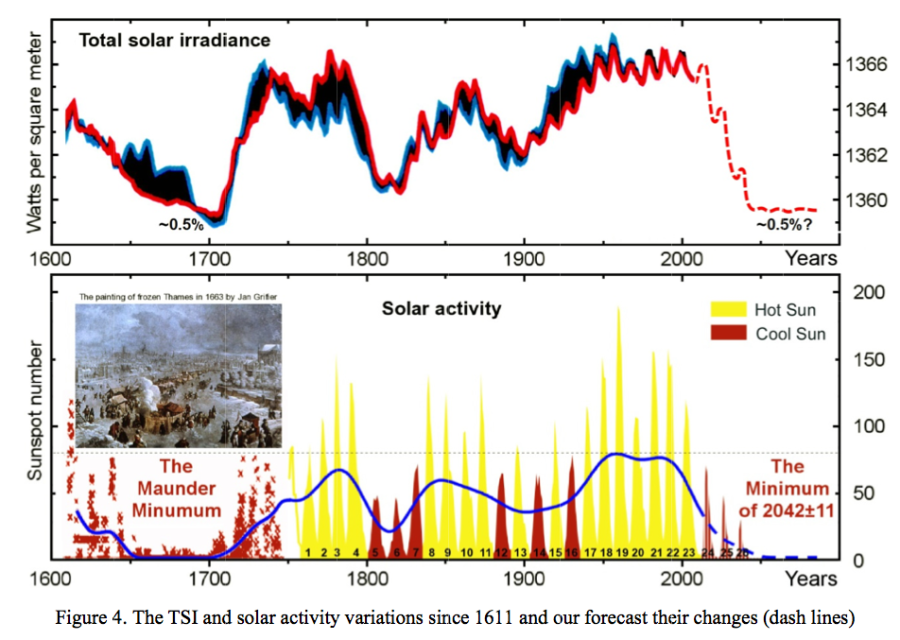 What's sad is the Global Warming/Climate Change Debate is purely political. Its a lie that's been thrust upon us by those in power to help them gain control of the world's politics, economy, banks, and ultimately our personal freedoms. This is the propaganda of the Far Left Political movement...the Progressive Movement. They've been working on this agenda for 100 years now, and have really stepped up the push to spread this lie over the past forty years.

Take the time to watch Dr. Ball's video above. He goes to great lengths to prove why and how we have been lied too concerning the Global Warming/Climate Change issue. He has a funny but very informative approach. It will be worth your time.

Lets just pretend that these scientists and climatologists that are saying that Global Warming is a lie, and what is really coming is another Little Ice Age. Can you image the upheaval that will be coming to the worlds population when (some say its starting now) we enter into another Little Ice Age. Take a long hard look at the video above by the History Channel...pay attention to how hard life in Europe was during the Last Little Ice Age. We are nowhere near being prepared for something like that...not even close. What will the future hold for us? What about our children and grandchildren?

The Truth Is Stranger Than Fiction!
at Tuesday, February 03, 2015