Why The Push For Everyone To Accept The Climate Change Agenda? 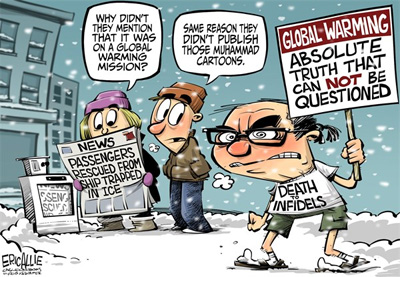 Have you ever asked yourself why there is such a push for everyone to accept the Climate Change/Man Made Global Warming Agenda? Why is this subject so important to everyone from the President on down? We are bombarded daily with this stuff from the Liberal Media. And if you've been following closely you know now that even the Pope of Rome has thrown his support, as well as the Muslim Mullah's. Do you really think that mankind is capable of destroying the planets climate? Think about that for a little bit. Also ask yourself why those who support this agenda are so bent on destroying anyone who stands up and says no this isn't true.  What is really going on?

Quote: "When summer arrives in the Northern Hemisphere, predictably, the alarmist “global warming” rhetoric heats up. Never mind that most weather forecasts beyond 72 hours are largely speculative; these hot-gas hucksters believe we should accept their inviolable 100-year forecast, starting with the most recent “Hottest Year Ever” report.

Last summer Barack Obama fixed the bar for his climate change “action plan” with these words: “[W]e know that the 12 warmest years in recorded history have all come in the last 15, and that last year was the warmest in American history. … [I]n a world that’s getting warmer than it used to be, all weather events are affected by it – more extreme droughts, floods, wildfires and hurricanes.”
Obama’s twisted assertions notwithstanding, the fact is global warming is largely a phantom menace, which is why the Left now religiously calls it climate change, or, a new favorite, “global climate disruption.” More on that in a minute.
Though the climate alarmists of the 1970s were driven by rhetoric over the coming ice age, the current climate calamity is one of global warming. But the question about climate isn’t if the weather is varying but why it is varying.
And the answer to that question is far less complicated than the “climate change” agenda, which is not about the weather, but about a political strategy to subjugate free enterprise under statist regulation – de facto socialism under the aegis of “saving us from ourselves.”
The climate is always changing relative to complex short- and long-term climate cycles, so “climate change” is a superbly safe political “cause célèbre” – sort of like “heads we win, tails you lose.” So, declarations like Obama’s 2014 State of the Union warning – “The debate is settled. Climate change is a fact” – fall into the “keen sense of the obvious” category."
---------------------------------------------------------------------------
Lord Christopher Monckton of Brenchley posted his answer on Anthony Watts blog this morning.

Quote: "In the carefully-planned build-up to the Paris “climate” conference whose true purpose is to establish an unelected and all-powerful global “governing body” (they’re no longer brazenly calling it a “government” as they did in the failed Copenhagen draft of 2009, but one can imagine what they’re thinking), the three longest-standing terrestrial temperature records – HadCRUt4, GISS, and NCDC – have all decided to throw caution to the winds.

Even though the satellites of RSS and UAH are watching, all three of the terrestrial record-keepers have tampered with their datasets to nudge the apparent warming rate upward yet again. There have now been so many adjustments with so little justification – nearly all of them calculated to steepen the apparent rate of warming – that between a third and a fifth of the entire warming of the 20th century arises solely from the adjustments, which ought to have been in the opposite direction because, as McKitrick & Michaels showed in a still-unchallenged 2007 paper, the overland warming in the datasets over recent decades is twice what actually occurred.
The three terrestrial datasets are no longer credible. The satellites now provide the only halfway reliable global temperature record. And it shows no global warming for 18 years 5 months (UAH) and 18 years 6 months (RSS), even though approximately one-third of all anthropogenic forcings since 1750 have occurred since 1997."
The Truth Is Stranger Than Fiction!
at Tuesday, August 04, 2015