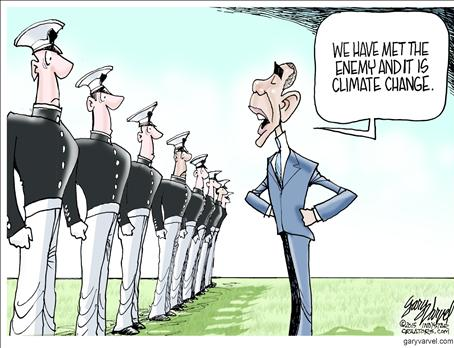 Effective immediately, the Space and Science Research Corporation (SSRC), a leader in climate prediction, has dropped the US government's ground based global temperature data from its list of reliable sources.

This significant step has been made by the SSRC after extensive review of the US government's ground temperature data and its wide divergence from more reliable sources of climate data, namely satellite systems.

The SSRC has found multiple flaws that it says render the US government's climate data virtually unusable. The SSRC has further observed that the US government and specifically, President Barack Obama, have routinely deceived the people regarding the true status of the Earth's climate, its causes, and where the global climate is heading.

In the past, the SSRC has used five global temperature data sets, three ground based (NOAA, NASA and HADCRUT) and two satellite data sets (RSS, UAH). These data sets are analyzed and an integrated picture of all five allows the SSRC to produce its semi-annual Global Climate Status Report (GCSR). HADCRUT is a combined set from two UK science groups.
As of today, the SSRC will no longer use the ground based data sets of NASA and NOAA because of serious questions about their credibility and allegations of data manipulation to support President Obama's climate change policies. Use of HADCRUT will also be suspended on similar grounds.

According to SSRC President, Mr. John L. Casey, "It is clear that during the administration of President Barack Obama, there has developed a culture of scientific corruption permitting the alteration or modification of global temperature data in a way that supports the myth of manmade global warming. This situation has come about because of Presidential Executive Orders, science agencies producing unreliable and inaccurate climate reports, and also with statements by the President about the climate that are patently false.

For example, the President has said that global warming is not only a global threat but that it is "accelerating" (Georgetown Univ. June 2015). Further, he has said that "2014 was the planet's warmest year on record" (State of the Union Address, January 2015). Both these statements are simply not true. He has also publicly ridiculed those who have correctly stated that there has been no global warming for eighteen years therefore nullifying any need for US government actions to control greenhouse gas emissions for any reason. Climate mendacity seems to be the rule and not the exception in this administration.
"As a result, the US government's apparently politically manipulated ground based temperature data sets can no longer be regarded as credible from a climate analysis standpoint. Until scientific integrity is restored in the White House and the rest of the federal government, we will henceforth be forced to rely solely on satellite measurements.

"Most disturbing of course, is that the President has failed to prepare the country for the difficult times ahead as a result of the ominous changes taking place on the Sun. Not only is the Sun the primary agent of climate change, but it is now cutting back on life giving warmth, bringing a new cold climate period. We will all face a more difficult future, one which the President is ensuring we will be totally unprepared for."

Dr. Ole Humlum, a Professor of Physical Geology at the University of Oslo, Norway and an expert of global glacial activity, is the co-editor of the SSRC's Global Climate Status Report (GCSR). He adds to Mr. Casey's comment with, "It is regrettable to see the politically forced changing of temperature data which will of course lead to the wrong conclusions about the causes and effects of climate change. Recently, NOAA indicated that May 2015 was the warmest May since 1880. Yet, this cannot be verified by satellite measurements which show that May was in the average range for the month over the past ten years. Also, on page 41 of the June 10, 2015 GCSR, we noted that the temperature spread between ground based and satellite based data sets, has now widened to a point that is problematic. The average in degrees Centigrade among the three ground based sets shows a 0.45 C warming in temperature since 1979. For the more reliable satellite systems, it is only 0.17 C warming. This 264% (0.45/0.17) differential is scientifically unacceptable and warrants ending the reliance on the ground based data sets until some independent investigation of the variance resolves the matter. While the use of satellite data only, will limit the depth of quality of the Global Climate Status Report, it will at the same time allow us to still provide the best available climate assessment and climate predictions possible using only the most reliable data."

The Truth Is Stranger Than Fiction!
at Saturday, August 01, 2015