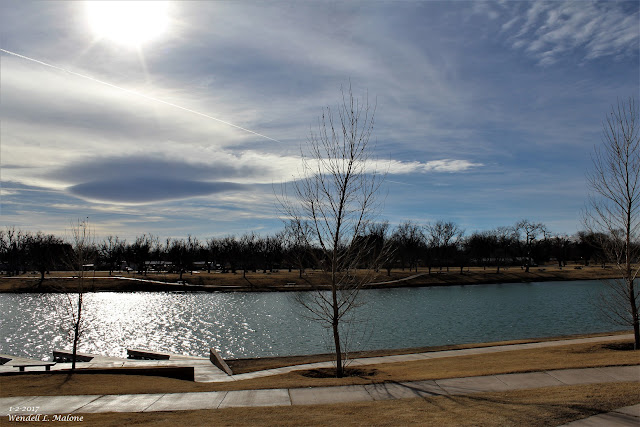 At 4:35 PM MST a Severe Thunderstorm wind gust of 67 mph was noted at the Guadalupe Mountains National Park Pine Springs Mesnet automated weather station. At 5:17 PM MST the Carlsbad Airport Asos clocked a Severe Thunderstorm wind gust of 60 mph, as did a Personal Weather Station in southeast Carlsbad around the same time. Between 5 PM and 5:30 PM damaging wind gusts were noted from Artesia south to Lakewood and Carlsbad. The Artesia Airport clocked a gust to 59 mph. Pea size hail fell in Artesia and Carlsbad and pea to dime size hail was noted in Lakewood. A tree was blown down in southeast Carlsbad, other tree limbs were reported blown down, and part of a carport was blown into power lines by the public. Roof and shingle damage was also reported in south Carlsbad by the public.

As this line of Severe Thunderstorms moved east into Lea County it accelerated in forward speed to 65 mph. The public reported power lines blown down west of Hobbs and the Hobbs Airport Asos clocked a peak gust to 69 mph at 6:35 PM MST.

I cannot ever remember having a Severe Thunderstorm in the Pecos Valley on New Year's Day in all of my 58 years. We should have been talking about snow reports today not damage reports from a line of Severe Thunderstorms. Go figure...just goes to show that we haven't seen it all when it comes to weather. 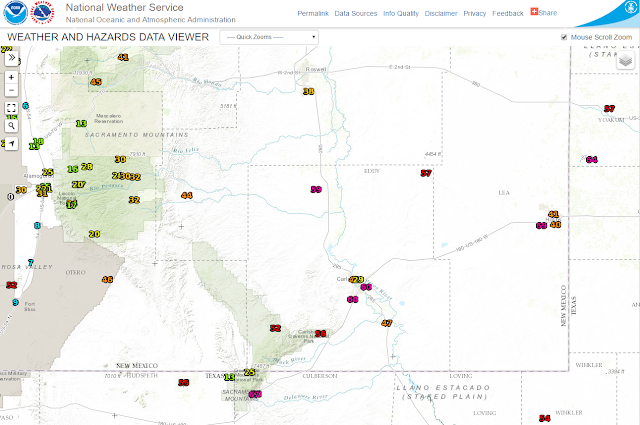 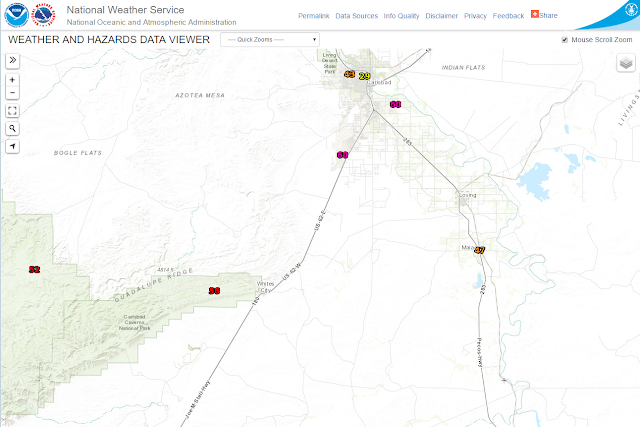 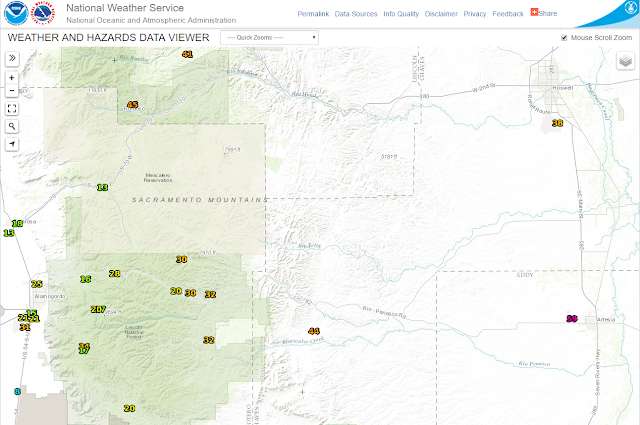 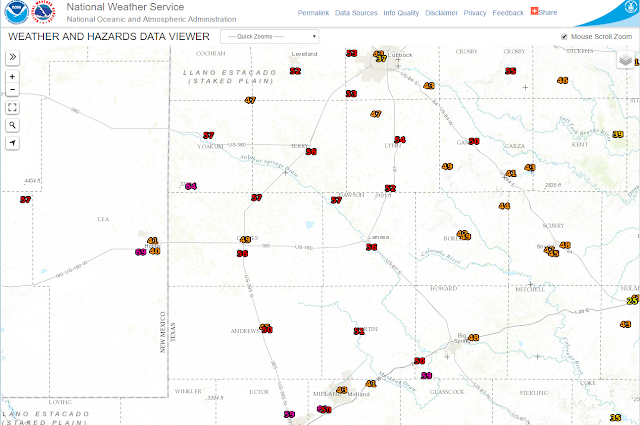 NWS MesoWest Rainfall Reports.
(As Of 8 AM MST This Morning). 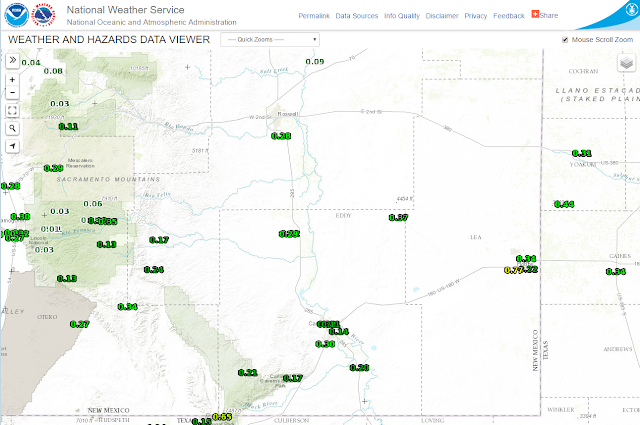 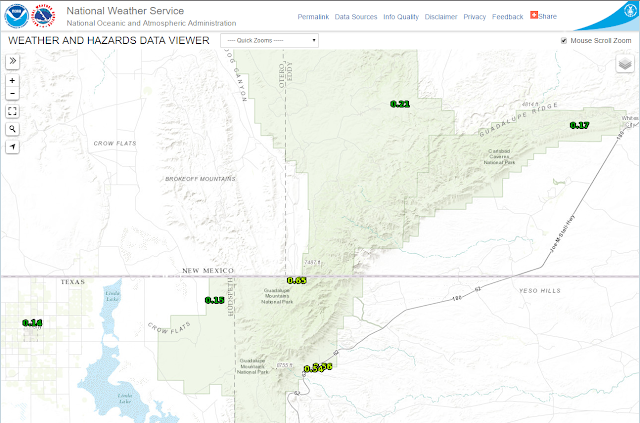 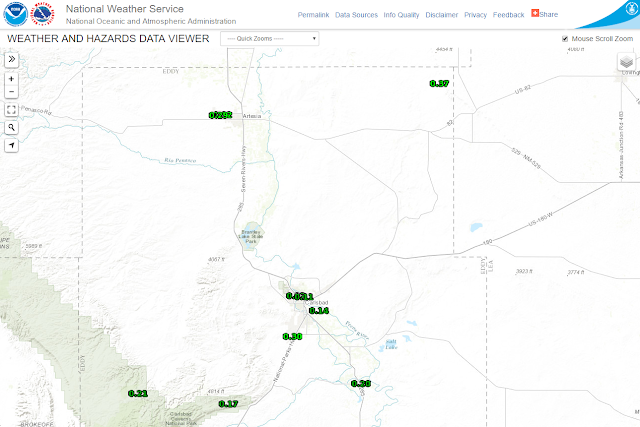 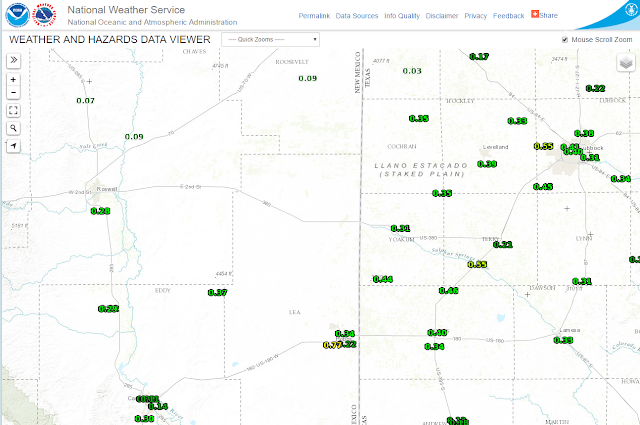 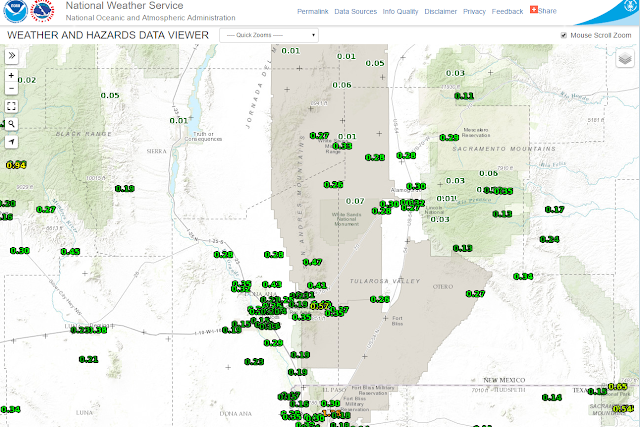 CoCoRaHS Rainfall & Snowfall Reports.
(As Of 8 AM MST This Morning). 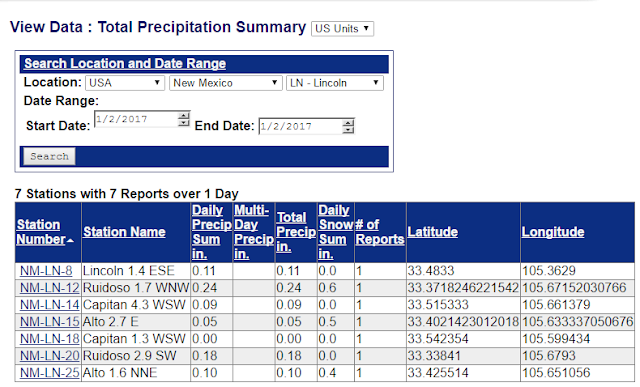 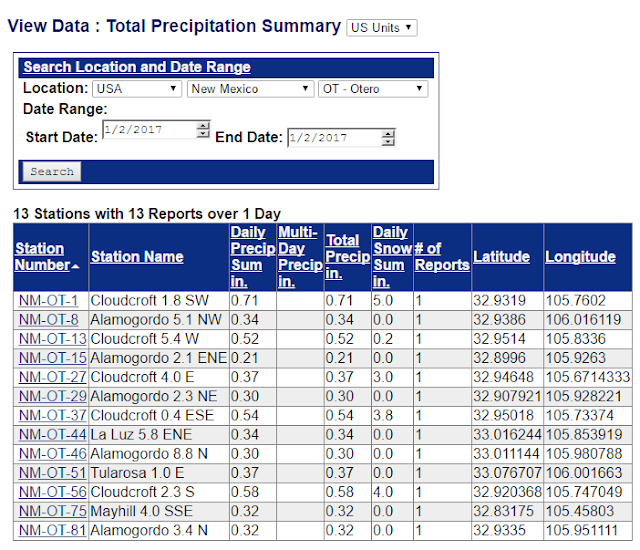 Cloudcroft picked up 3.8" of snowfall from yesterday's quick moving and hitting storm. Its been a tough year for them snowfall wise with only 18.3" reported to date at the Cloudcroft CoCoRaHS Station 0.4 ESE. Cloudcroft averages about 80" of snow a year. Ski Apache west of Ruidoso with a base elevation of 9,600' hasn't fared any better with only a season total to date of 14", with 3" of that falling yesterday. Given that each season they average about 180" they are a long way from being caught up. 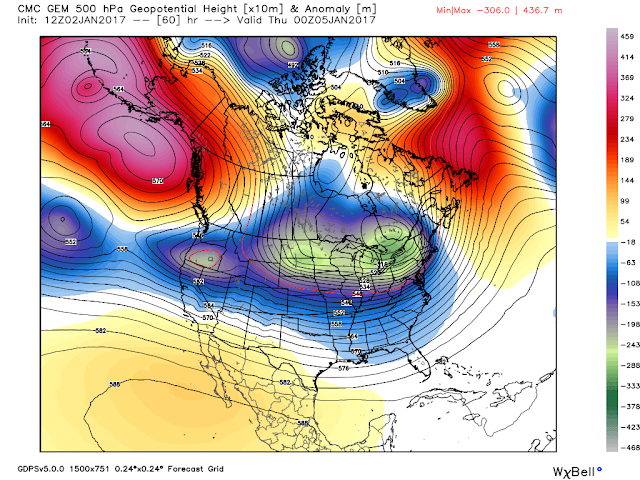 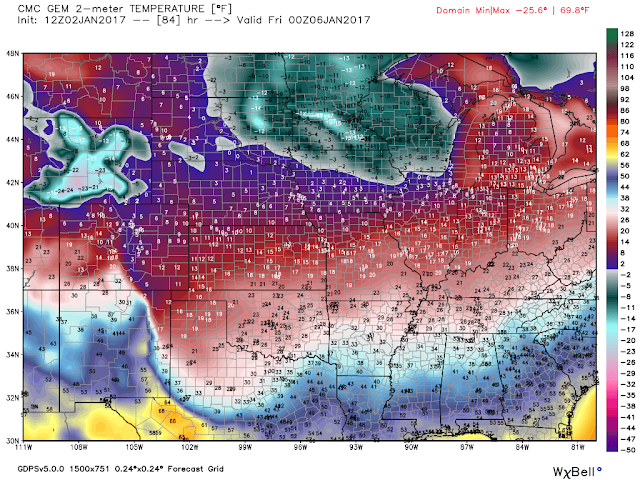 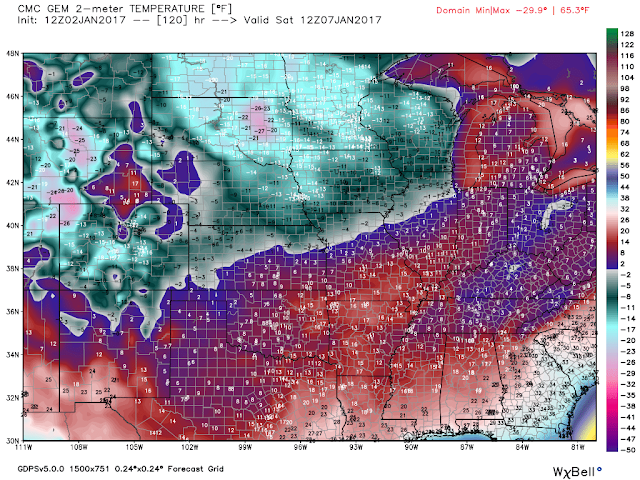 To put it simply the computer forecast models are all messed up concerning the upper air pattern over North America this week. Basically they have not resolved what is going to transpire over the next five to seven days. The basic thought is that a Rex Block is setting up and this is confusing the models big time. Back and forth they go with each new run, up and down, and all around. Its enough to drive you crazy trust me. This is why meteorologists, forecasts, chasers, and such use them as a guide and not an absolute when it comes to trying to figure out the weather.

With the model mayhem going on now concerning this weeks weather across North America I can't for the life of me understand why some climatologists, meteorologists, and other professionals want to put so much stock in long range model forecasts that learn toward the AGW Global Warming Argument, or should I say the Climate Change Argument. Give me a break...when the world's best computer forecast models can't even figure out what is going to happen five to seven days down the road; pray tell me how are they supposed to be able to accurately predict what's going to happen one year, 10 years, or 100 years from now? Wake up and quit believing this garbage. Sorry just felt like throwing that one out there...its free so you can agree with me, or not.

So how far south and how quickly does the anticipated next arctic cold front move? Specifically here in southeastern New Mexico and West Texas. Current thinking is it will arrive locally Wednesday night...maybe get shoved out of the area on Thursday before another reinforcing surge of the colder arrives Thursday night or Friday. I've posted the Canadian model graphic above thus leaning towards its colder surface temperatures later this week going into next weekend. This air mass looking similarly as cold as what we experienced back on December 18th. Roswell recorded a low temperature of 6ºF, Artesia 8ºF, Carlsbad Carlsbad 11ºF, and Hobbs 7ºF. Will it get this cold again? There is that chance but its not a given that it will just yet. 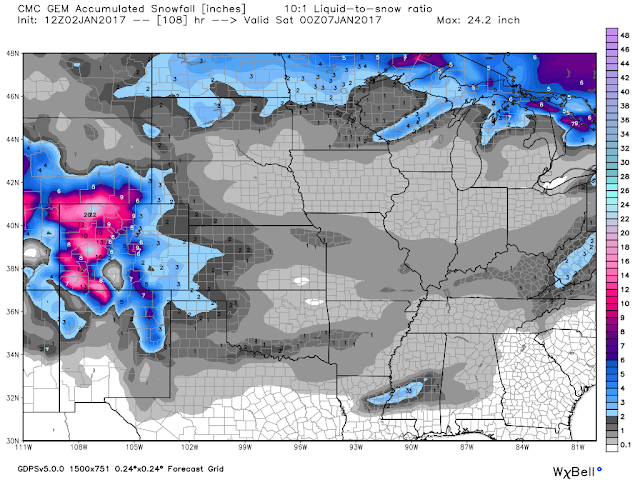 Unless the jet stream buckles and sends a short wave trough of low pressure southward into the area our chances for meaningful snowfall with this next winter weather maker don't look all that impressive right now. The Canadian model gives us a dusting and that's about it. More on all of this later this week.

The Truth Is Stranger Than Fiction!
on January 02, 2017
Posted by Wendell Malone