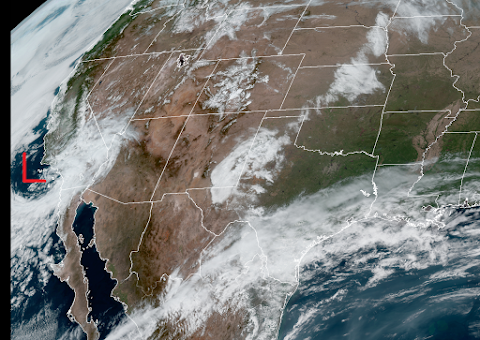 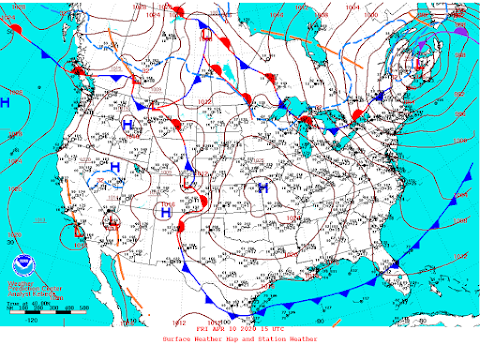 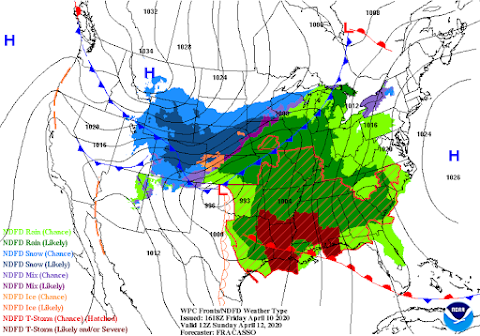 Valid At 6 AM MDT Easter Sunday Morning.
Low stratus clouds continue to key our skies overcast as of 2 PM MDT this Good Friday afternoon. Low level southeasterly moist upslope from behind a stationary front draped along the east slopes of the Guadalupe, Sacramento, Capitan, and northward along New Mexico's central mountain chain is producing this cloud cover. This is keeping our afternoon temperatures from climbing up out of the 50's and 60's. These cool temperatures and low cloud deck are also limiting the sun's ability to destabilize the atmosphere locally. Should the low clouds burn off later this afternoon and clearing occur then the atmosphere would warm and become a little more unstable which would increase our chances for thunderstorms...a few perhaps which could become severe.
Severe Thunderstorms This Afternoon And Evening.
Storm Prediction Center Severe Weather Outlook. 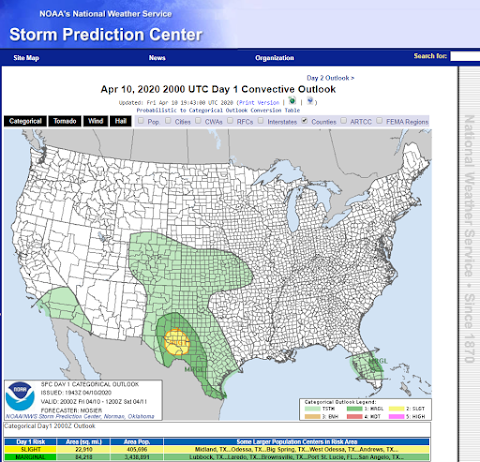 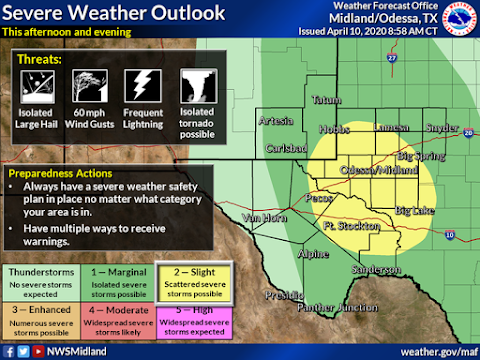 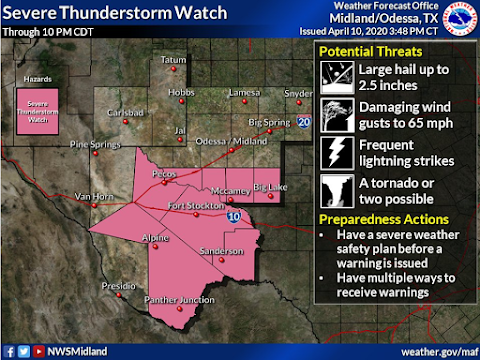 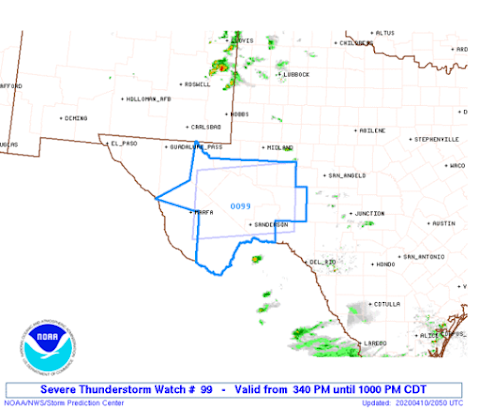 A Severe Thunder Watch is in effect from 2:40 PM MDT through 9 PM MDT for the Trans Pecos Region of West Texas. Hail up to 2.5" in diameter and damaging thunderstorm wind gusts to 65 mph will be possible in and close to this watch area. Isolated tornadoes are also possible.
Scattered thunderstorms are forecast to break out over Southeastern New Mexico and parts of West Texas this afternoon and evening. Some of these may continue well into the late-night or early Saturday morning. Some of these thunderstorms particularly over the Trans Pecos Region of West Texas (Slight Risk Area highlighted in yellow in the graphic above) will become severe. A few supercell thunderstorms will be possible which will produce large hail, damaging thunderstorm wind gusts in excess of 60 mph, deadly cloud to ground to lightning, and locally heavy rainfall. Localized flash flooding could also occur with the strongest thunderstorms. An isolated tornado or two cannot be ruled out either.
Thunderstorms will come to an end Saturday morning. Strong southwesterly winds will develop in the afternoon gusting to around 40 mph across the Southeastern Plains. A High Wind Warning is in effect for the Guadalupe Mountains of Southeastern New Mexico and West Texas Saturday. Southwesterly winds are forecast to become sustained at 35 to 45 mph with gusts to 60 mph. A High Wind Watch is in effect for the same area late Saturday night through Sunday afternoon.
NWS NDFD Forecast High Temperatures.
Today - Good Friday. 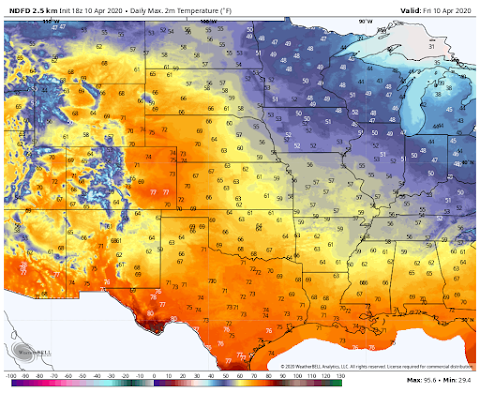 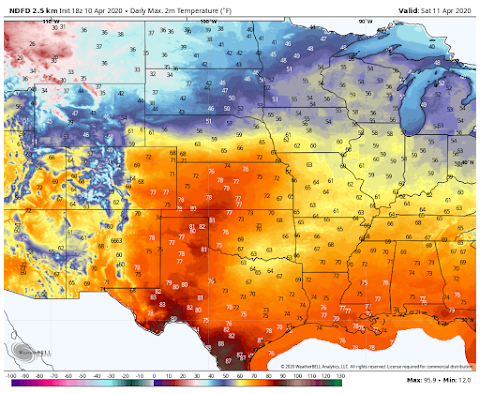 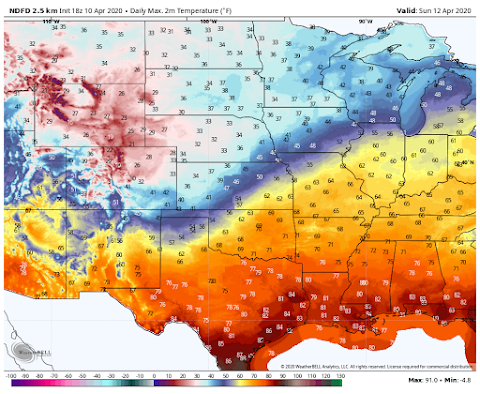 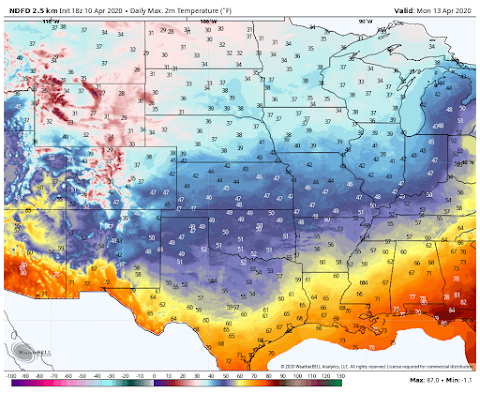 High temperatures Saturday and Easter Sunday are forecast to be in the mid to upper 70's both days locally. A few 80's may even occur in some of our normally warmer spots. Southwesterly winds gusting up to around 40 mph will spoil an otherwise beautiful holiday weekend. As was mentioned a couple of days ago the bottom falls out of the thermometer come Monday and Tuesday as a strong cold front for this time of the year plows southward down the eastern plains and into the local area on Monday. Much colder air is forecast to overspread the area behind the cold front.
24-Hour Temperature Change Easter Sunday. 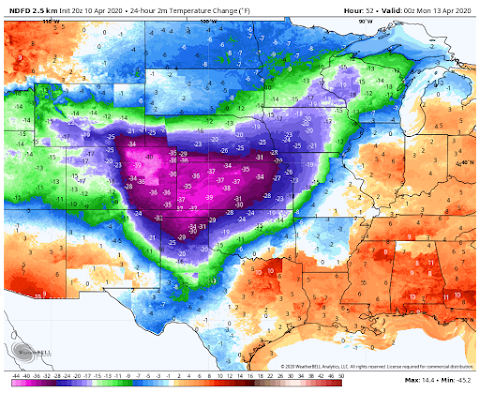 Valid At 6 PM MDT Easter Sunday Afternoon.
As the strong cold front advances southward Easter Sunday it should be arriving in Eastern New Mexico late in the afternoon. To the north of the frontal boundary, temperatures are forecast to fall some 30 to 40-degrees compared to Saturday afternoons readings. Most of our local area will see highs on Monday only in the 50's and 60's. If this front arrives a little ahead of schedule then we may not get out of the 40's and 50's on Monday.
NWS NDFD Forecast Low Temperatures. 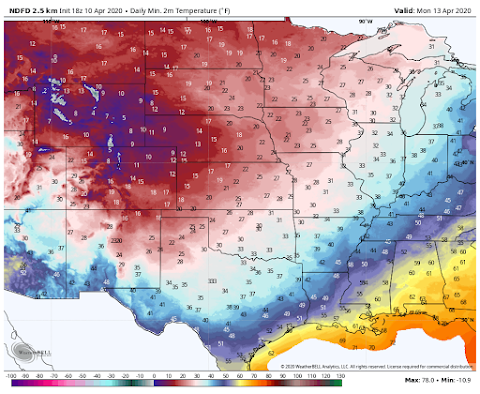 Valid Monday Morning.
Current forecast models have our morning low temperatures dropping down into the 30's Monday morning and again Tuesday morning. Looks like there is a pretty good chance that most of us in the lower elevations locally will see at least a light freeze both mornings. If not very close to it.
So Is It Going To Snow Or Not?
ECMWF Surface Forecast. 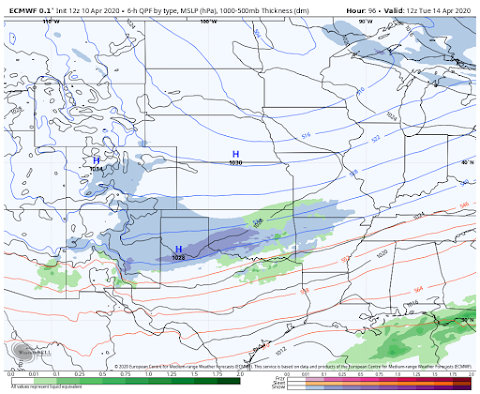 Valid At 6 AM MDT Tuesday Morning.
These mornings run of the European forecast model (ECMWF) develops a band of light to moderate snowfall from northeastern New Mexico southward into Southeastern New Mexico late Monday night continuing through early Tuesday afternoon. The GFS model not so much and the Canadian model is even more energetic.
ECMWF Forecast Snowfall Totals. 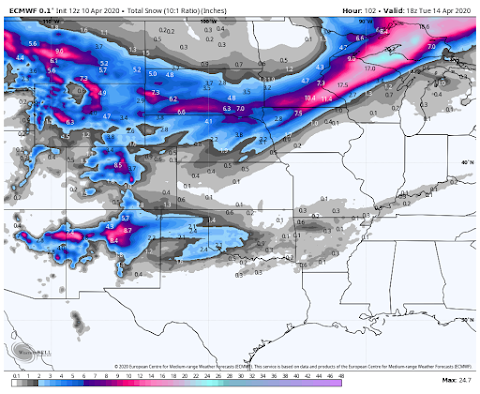 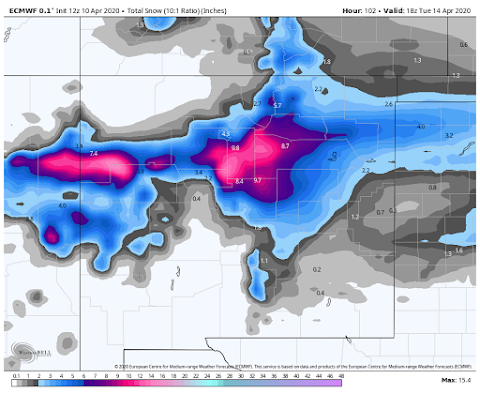 Valid At Noon MDT Tuesday.
So far the models are holding onto their forecasts of snow locally...even though current runs only produce light amounts. No doubt that these forecasts will continue to change between now and Monday as the models hone in on the finer details of the upper air pattern evolving over the Continential U.S. Historically this has happened several times and really isn't all that unusual. One of the more memorable late spring snow events occurred in April 1983. Artesia recorded an amazing 15.5" of snowfall out of that storm. I was living in Lakewood on our family farm at the time and I recorded a total of 15.9". Hope measured 22.5", the Roswell Airport only 5.3", Capitan 30.5", Ruidoso 24.3", Cloudcroft 32.6", and El Paso 16.5". See more about this historic late spring snowstorm via my blog post link below.
4-Day Snowstorm Of April 5-9th, 1983.
The Truth Is Stranger Than Fiction!