Strong Cold Front May Produce Another Haboob - Looking Back At The April 1983 Snowstorm. 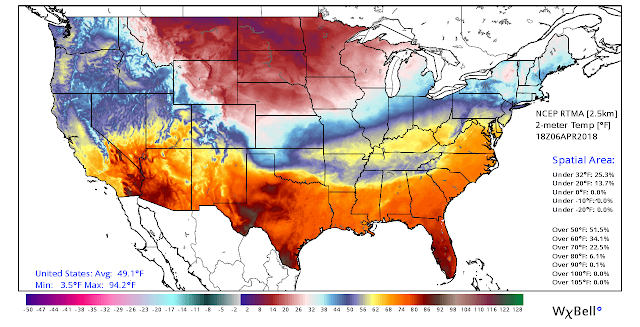 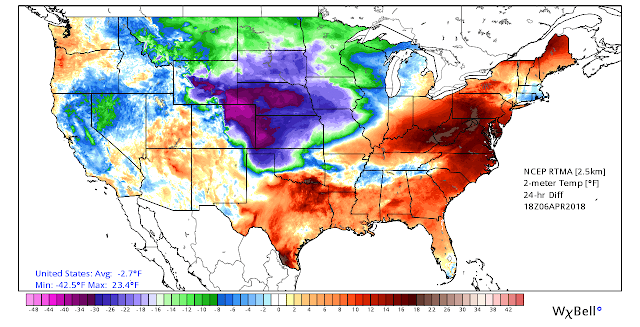 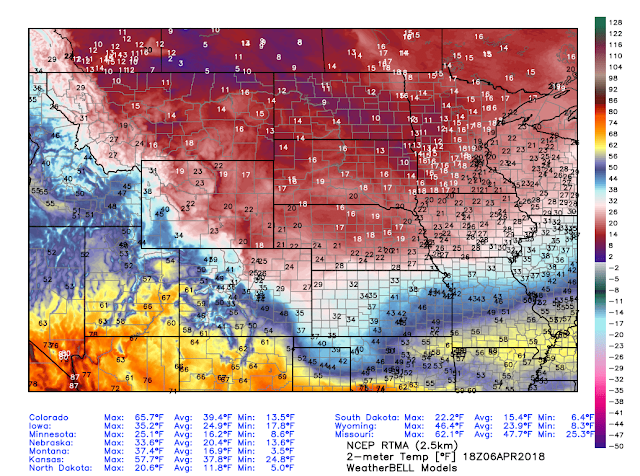 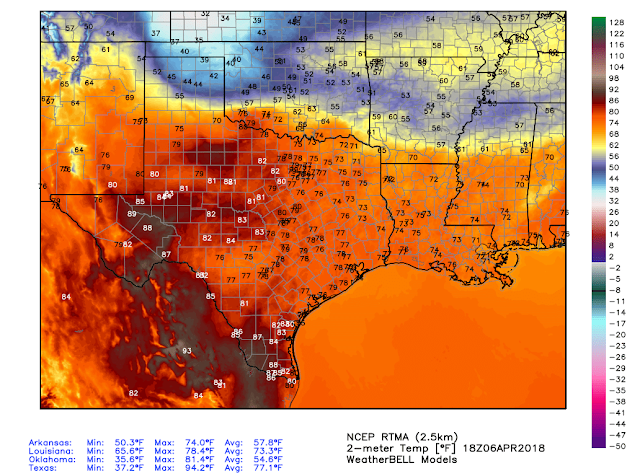 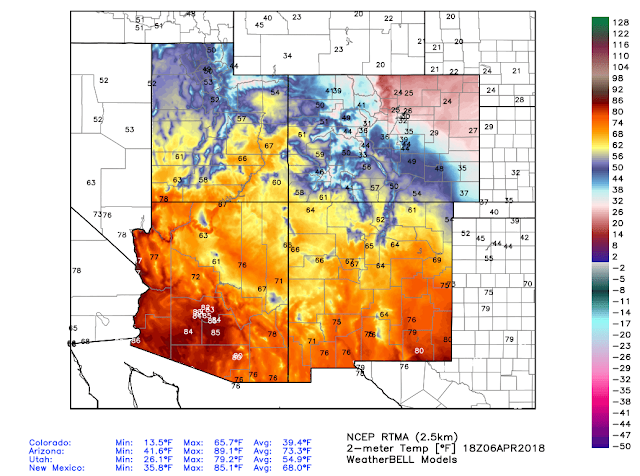 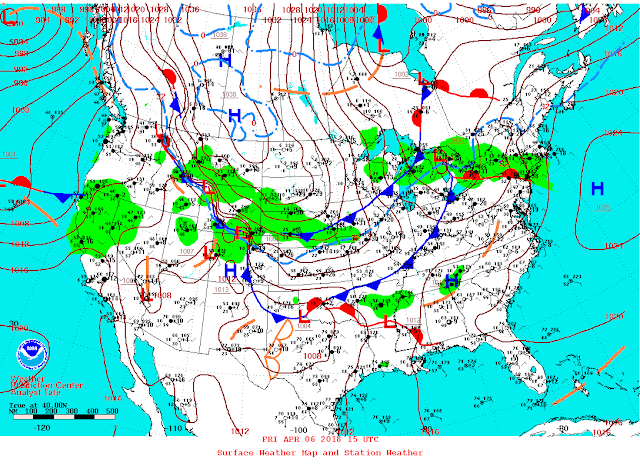 A strong cold front is headed south towards Southeastern New Mexico and West Texas. As of 1 PM MDT we had climbed up into the mid 70's to the low 80's across the lower elevations and the 50's and 60's in the mountains.

Much colder air has overspread the northern plains of the nation. Single digits and teens dominated the temperature maps from Montana to Nebraska at noontime today. Wind chill temperatures were ranging from near 0ºF to -10ºF. This will be turn out to be some of the coldest weather experienced on record for many of these areas for the first week of April. Some temperature records that are forecast to be tied or broken go back all the way to 1875. 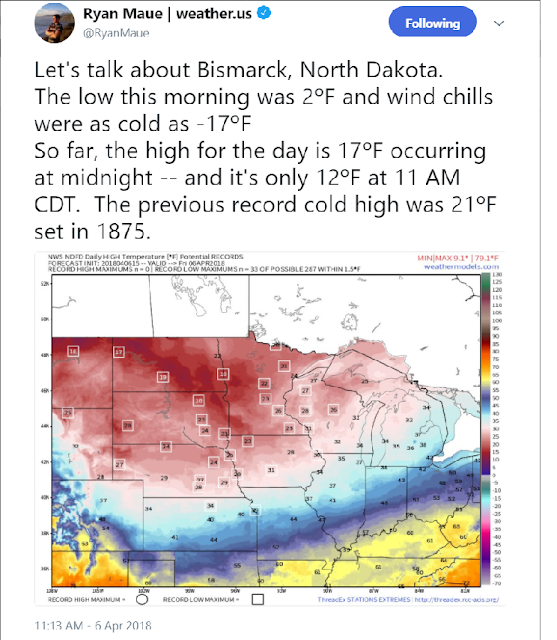 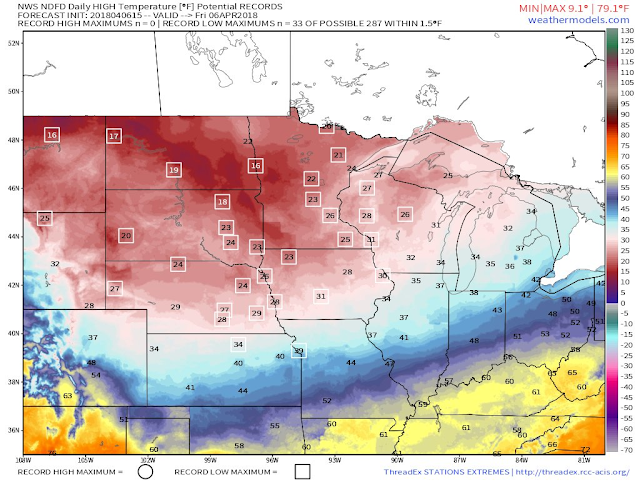 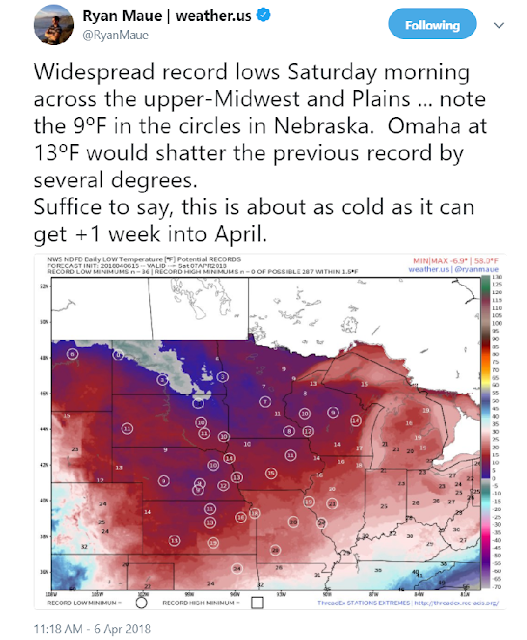 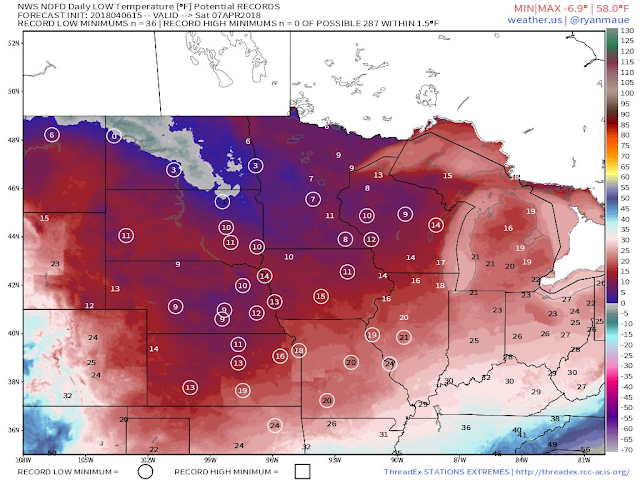 Windy & Dusty As The Front Arrives.

Wind Advisories have been issued for much of the local area. As the cold front arrives this evening northeasterly winds are forecast to become sustained at around 25 to 35 mph with gusts near 45 mph. Another haboob may also accompany the frontal passage and associated strong winds. Sudden drops in the visibility will be possible this evening. See the Special Weather Statement issued by the Midland NWS Office for our area for more details.

A Freeze Warning has also been issued for parts of the area for low temperatures forecast to drop down into the upper 20's to near freezing by sunrise Saturday morning. 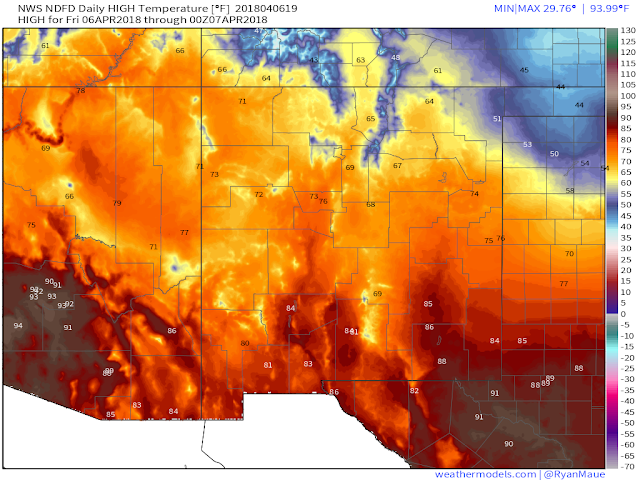 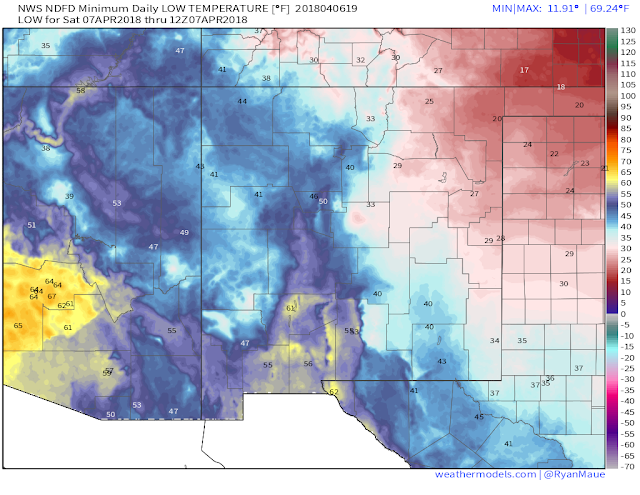 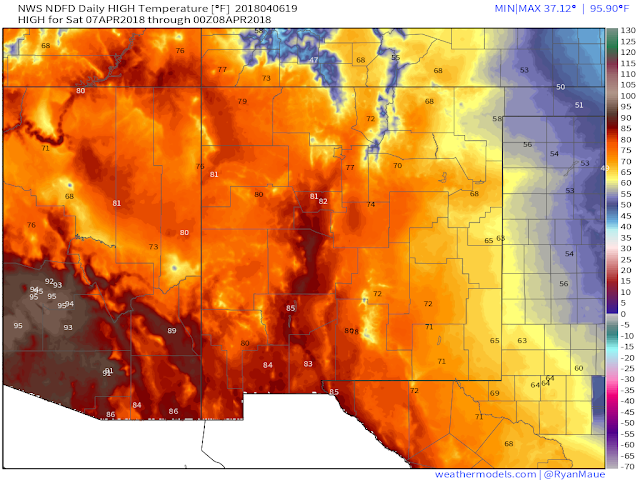 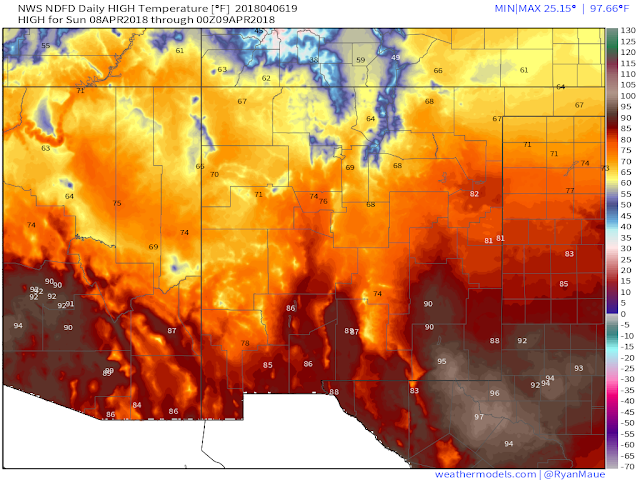 Up and down on the temperature roller coaster ride we go this weekend.

Ridiculous Weather But Hey This Is Normal For April!

Looking Back At April, 1983.
Record Cold & Snow - How Many Of You Remember This? 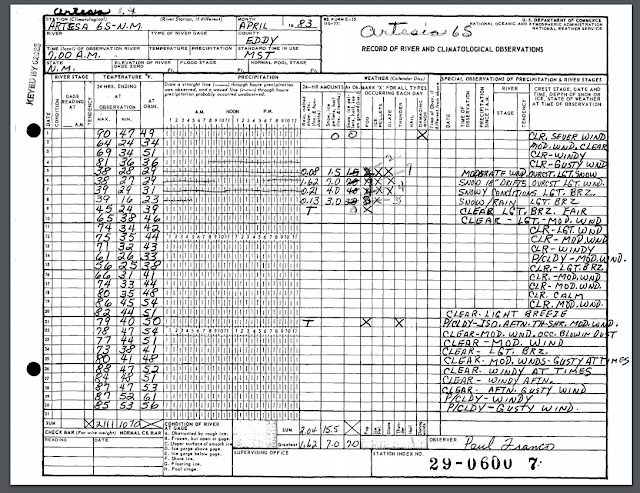 I was living in Lakewood on our family farm/ranch at the time and I measured 15.9" of snowfall with 9" on the ground the mornings of the 5th and 6th. My lowest temperature was 17ºF on the morning of the 8th. 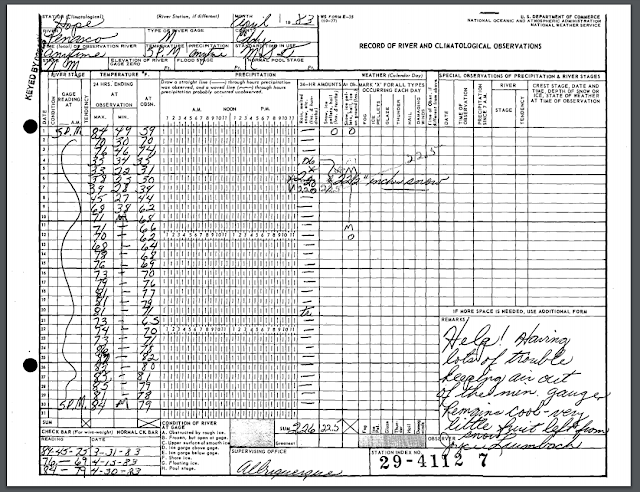 Hope which is located 20 miles west of Artesia measured a storm total of 22.5" of snowfall and 2.26" of rainfall. 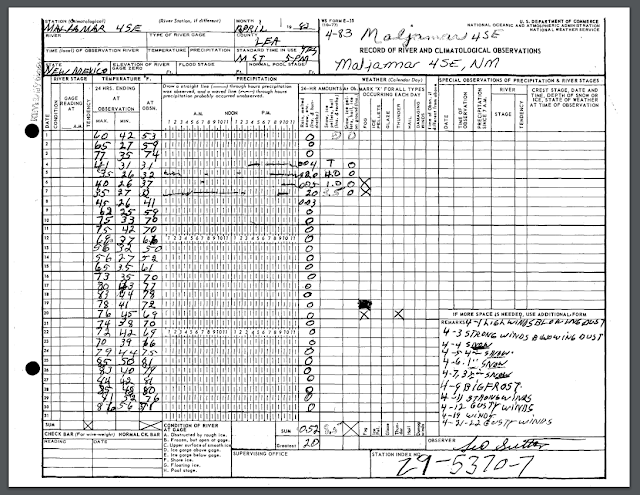 Maljamar recorded 8.5" of snow from the storm. 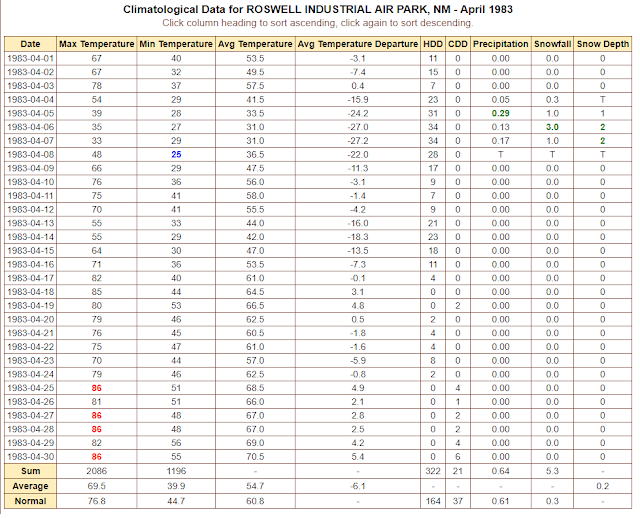 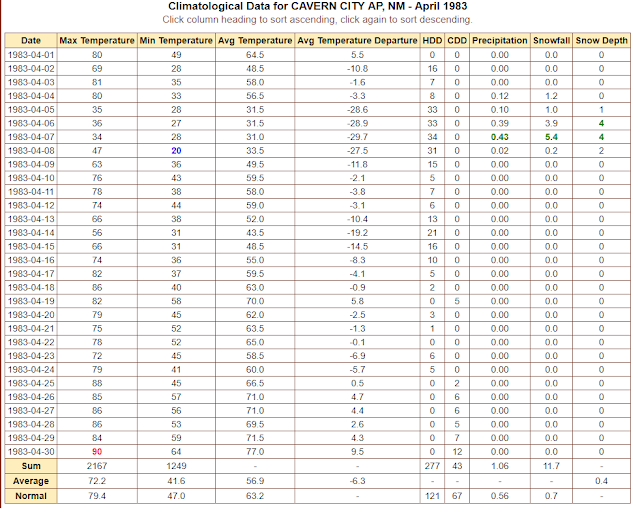 The Carlsbad Airport measured 11.7" of snowfall out of the storm with 4" on the ground on the 6th and 7th. On the morning of the 8th the Airport recorded a low temp of 20ºF. 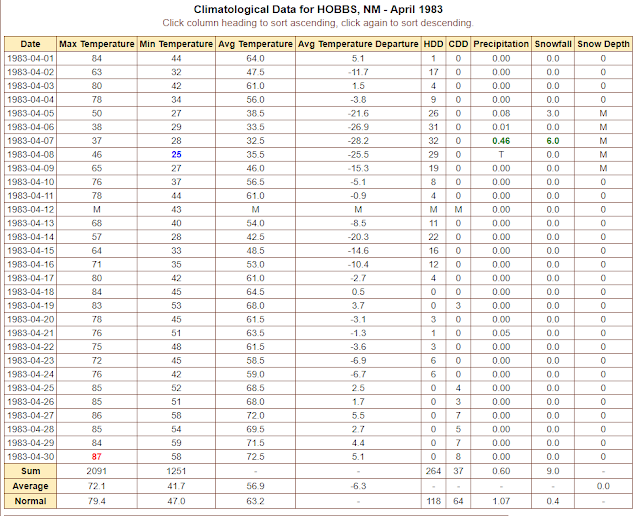 Hobbs recorded 6" of snowfall out of the storm. 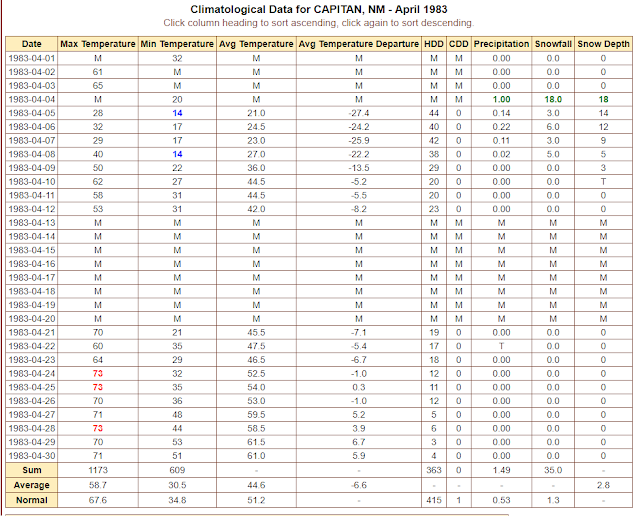 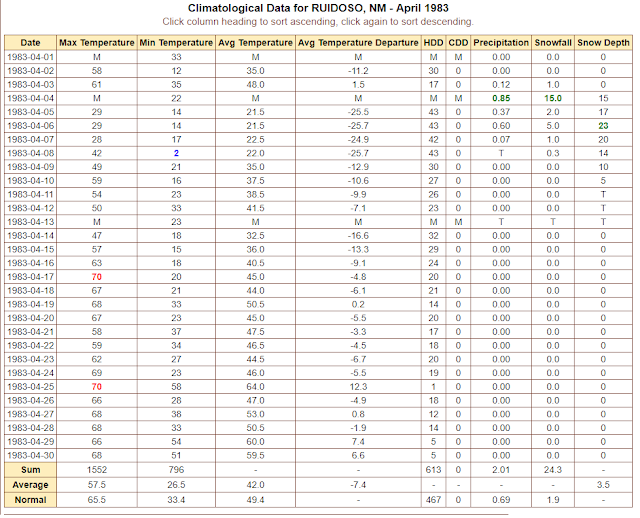 Ruidoso west of Roswell recorded 24.3" of snow from the storm with 23" on the ground on the 6th. On the morning of the 8th they dropped down to 2ºF. 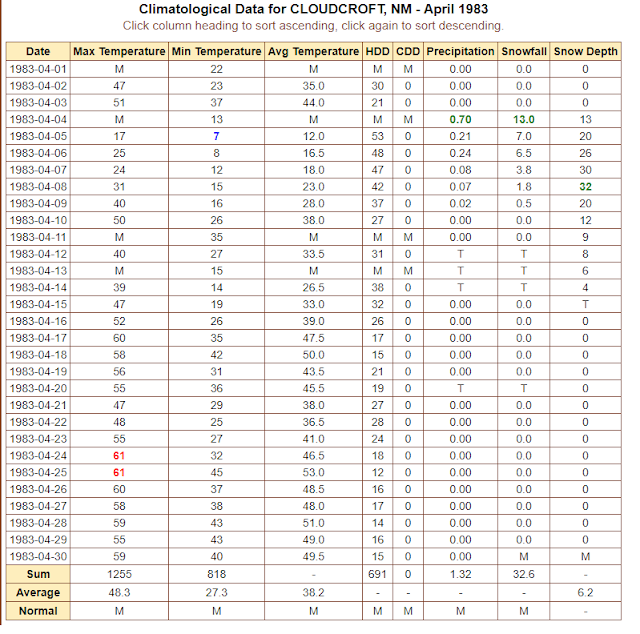 Cloudcroft located 90 miles west of Artesia in the southern Sacramento Mountains measured a whopping 32.6" of snow out of the storm. 32" was on the ground on the 8th and on the morning of the 5th they dropped down to 7ºF. 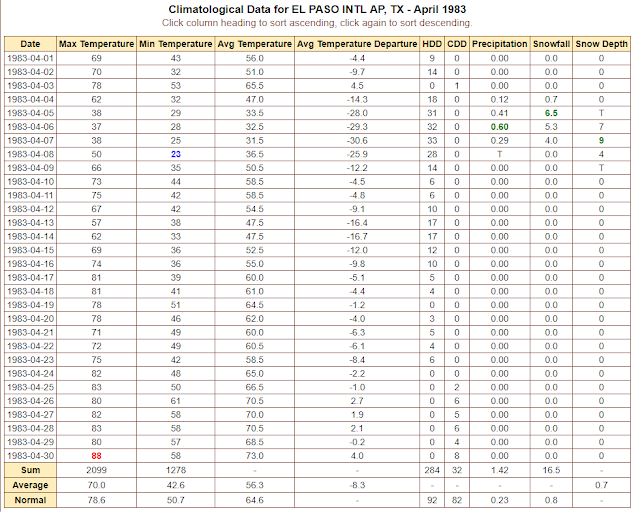 Even El Paso got in on the action with a snowfall storm total of 16.5". On the 7th they had 9" on the ground and dropped down to 23ºF on the morning of the 8th.

The Truth Is Stranger Than Fiction!
on April 06, 2018
Posted by Wendell Malone