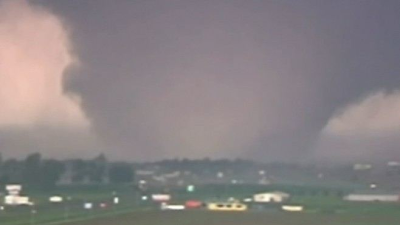 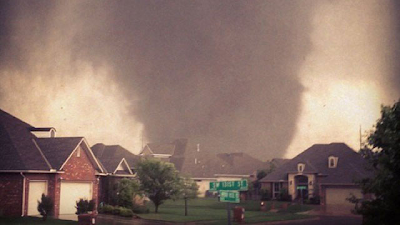 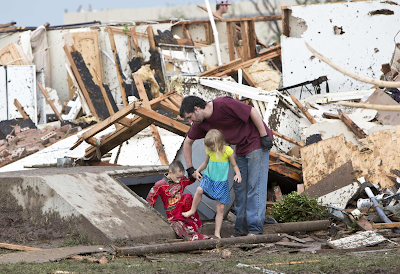 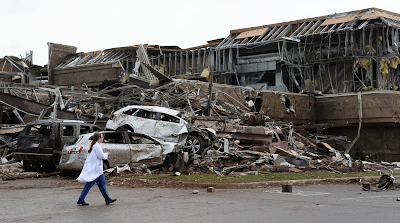 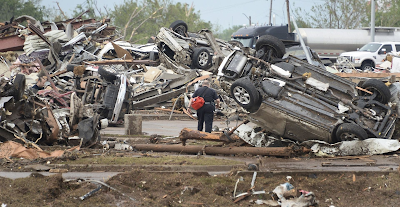 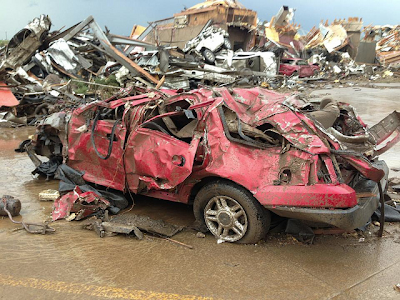 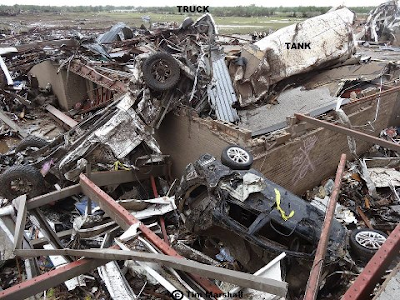 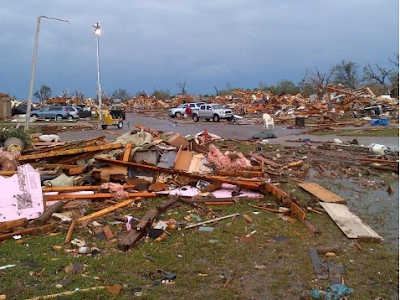 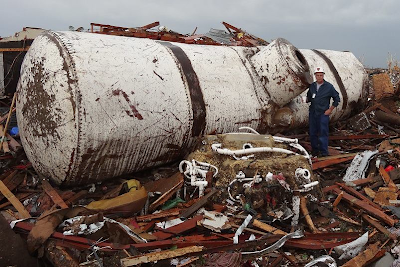 This Large Steel Tank Was Picked Up And Carried 1/2 Of A Mile
And Drooped Into A Residential Area Of The WestMoore
Subdivision Of Moore, Oklahoma. Courtesy Of Tim Marshall. 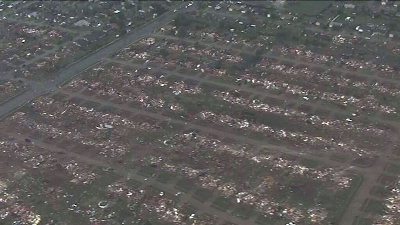 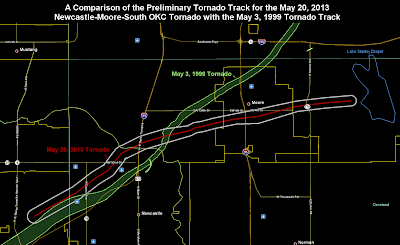 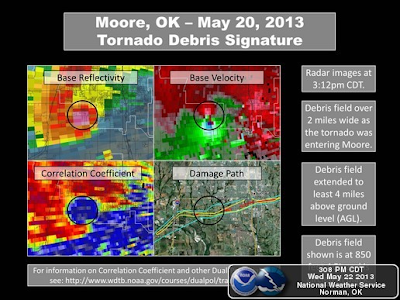 Courtesy Of The Norman NWS Office.

Update 10:00 PM MDT, Tuesday, May 21, 2013- A lot has changed concerning the details of the Moore, Oklahoma tornado since I updated this blog at 5:30 AM MDT this morning. First, I talked with my dad who lives in Tucson, Arizona this morning, and he informed me that my uncle was there visiting with him and was fine. One of my cousins, and my half-sister, who both live in north Moore, are fine and escaped the tornadoes wrath. I am relieved and grateful for this. My heart goes out to all of the victims, theirs families and friends who have been affected by this horrible event...you continue in my prayers.

Much has changed also concerning the facts about this tornado. According to the Norman, Oklahoma National Weather Service Office the tornado was on the ground for 50 minutes, and cut a path of destruction for 17 miles that was up to 1.3 miles wide. It has also been upgraded to an EF-5 strength-wise.

FOX News is reporting tonight that only 24 people lost their lives in this violent tornado, not the 51 that was reported last night, and the 91 that was reported this morning. There were over 200 people injured by this tornado but that count hasn't been finalized.

There isn't a doubt in my mind tonight that many many lives were saved in Moore due to the early warnings provided by the Norman, Oklahoma National Weather Service Office. Credit must also be given to the local Oklahoma City News Media outlets, the storm chasers who were chasing this deadly monster, and the local National Weather Service Skywarn Spotter, and Amateur Radio Groups. Hero's come in many forms sometimes, and in this case they were local Law Enforcement personal, 911 Emergency Dispatches, Firemen, local Doctors and Nurses, and the many volunteers who all are working together to save and repair as many lives as possible.

Update 5:30 AM MDT, Tuesday, May 21, 2013- Officials are confirming that 91 people have been killed by the Moore tornado yesterday, and 233 have been injured. This number is expected to rise today. I'm waiting to hear if my uncle and his family survived this monster, they live in Moore. The May 3rd 1999 tornado damaged his home but nobody was hurt...hoping they were lucky again.

Apparently the tornado left a path of destruction that was 20 miles long and up to two miles wide in places. It was on the ground for 40 minutes. Officials are estimating that a 30 square mile area has been devastated  Moore residents had 16 minutes of warning time before the tornado struck according to the Norman, Oklahoma National Weather Service Office.

It makes me sick to my stomach to see this type of destruction...many storm chasers who chased this tornado have been shaken by what they saw yesterday. This is our worst fears come true. Sadly I've heard via news media reports, more than one person state that this could never happen to them, "we have tornadoes, but they always hit somebody else." Who would have dreamed that Moore would suffer a fate worse than May 3rd, 1999?

Yet here in southeastern New Mexico I still run into a lot of people who believe that we don't have tornadoes, and even if we do, we will never have anything like this happen. I've argued with our local residents all of my life over this issue. I hope and pray that it never does! We are not prepared for something like this...not even close. I'm not saying that we could have a one to two mile wide EF4/5 tornado, but over the past 40 years I have chased more than one large tornado here locally, that was 1/4 - 1/2 mile wide.

Tragedy once again strikes Moore, Oklahoma in the form of a mile wide wedge tornado. Early reports tonight indicate that at least 51 people have perished in this Oklahoma City suburb, many of these children, with over 120 injured. Sadly these numbers are expected to rise as search and rescue efforts continue.