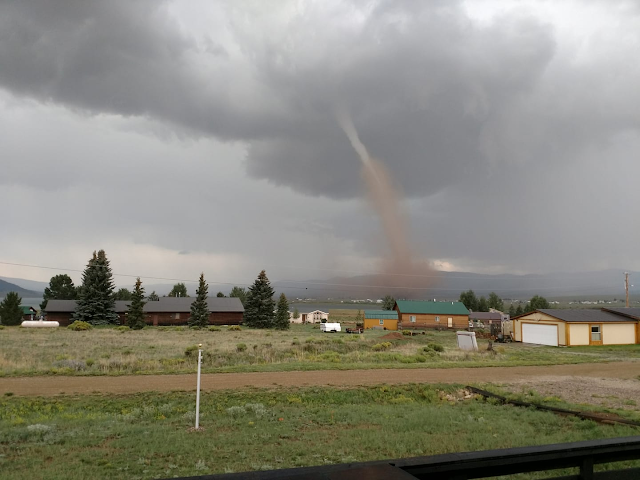 Incredible video and photos of a tornado this afternoon in Eagle Nest, New Mexico. Eagle Nest is located in northern New Mexico in the Moreno Valley at an elevation of 8,238'. So once again and for the second time this year a tornado has touched down in or near a mountain community. The first sighting occurred near Picacho in Lincoln County, 31 miles east of Ruidoso at an elevation of around 5,000' to 6,000' on May 25th of this year. Golf ball size hail is also reported to have fallen in Eagle Nest this afternoon.

Some of the best video yet of the #Tornado in Eagle Nest #NM from BJ Lindsey. #nmwx pic.twitter.com/z7pkp1keB1
— Mark Ronchetti (@KRQEMark) August 9, 2018

We had a confirmed tornado around 2:30 PM near Eagle Nest. Trained spotters also reported golf ball size hail and an overturned trailer. No word on injuries...
If watching at work, watch out for some explicit language.
📹: Nathan Shramm @KOB4 #nmwx #Monsoon2018 pic.twitter.com/y8Z4PRfT3k
— Jorge Torres (@JorgeTWeather) August 9, 2018

Up close #Tornado video from Pam Kite as she looks from her deck. #nmwx pic.twitter.com/0HRu49rwy3
— Mark Ronchetti (@KRQEMark) August 9, 2018


***Weather video of the day*** a land spout on the ground in Eagle Nest #NM. We don’t see this often in the mountains but today it rolled through between Eagle Nest and Angel Fire. #nmwx pic.twitter.com/ziKK6bm26Z
— Mark Ronchetti (@KRQEMark) August 9, 2018