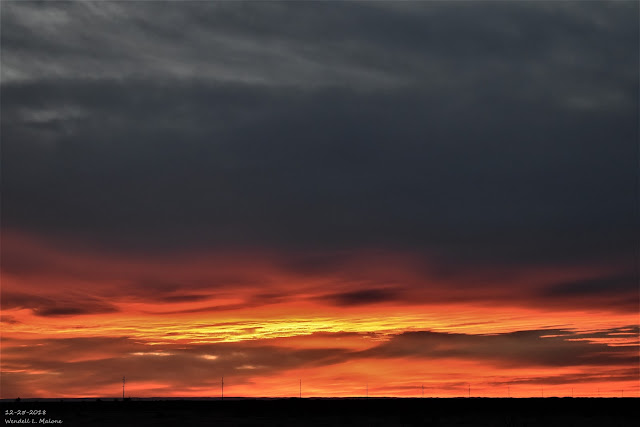 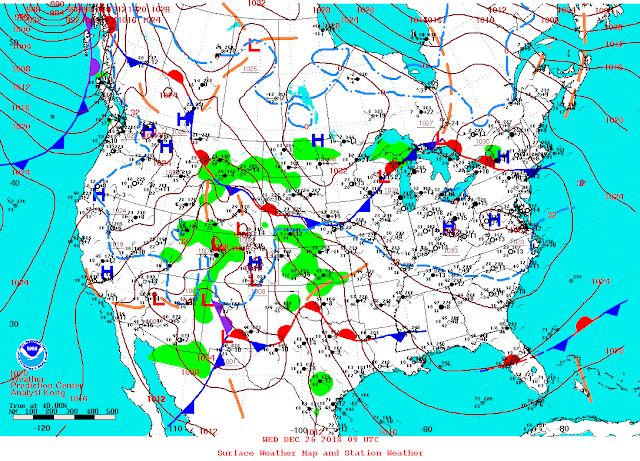 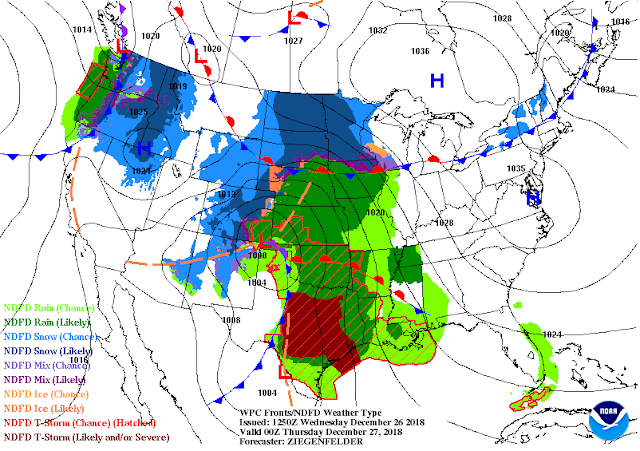 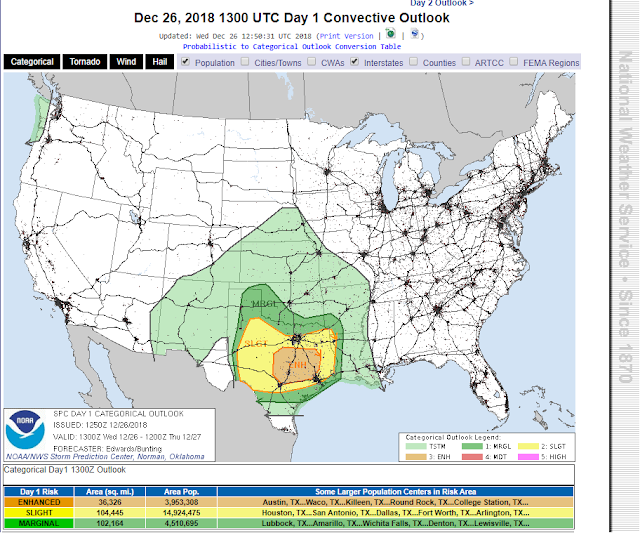 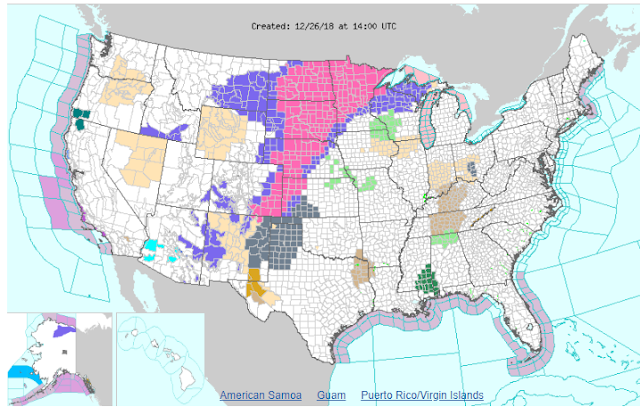 Click on the link above to open up this map for all of the latest National Weather Service Watches, Warnings, Forecasts, and much more. After you open up the link then click anywhere on the map where you are interested in and you will then be re-directed to the NWS Forecast Office that covers that location...which will have the very latest updated weather information for that location. 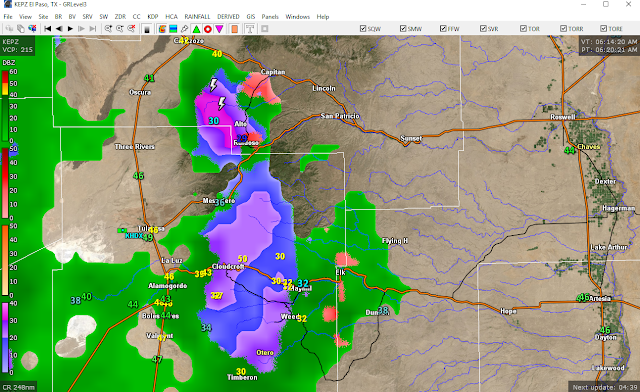 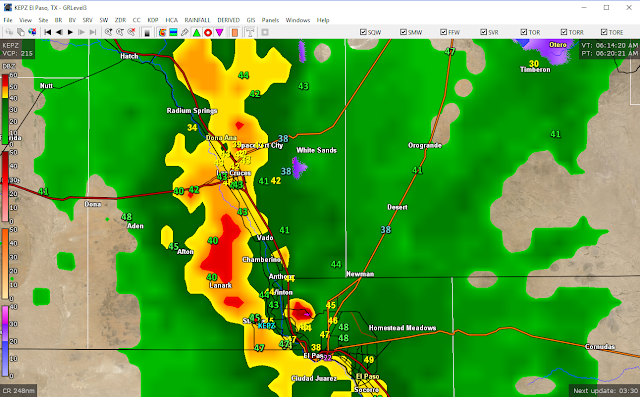 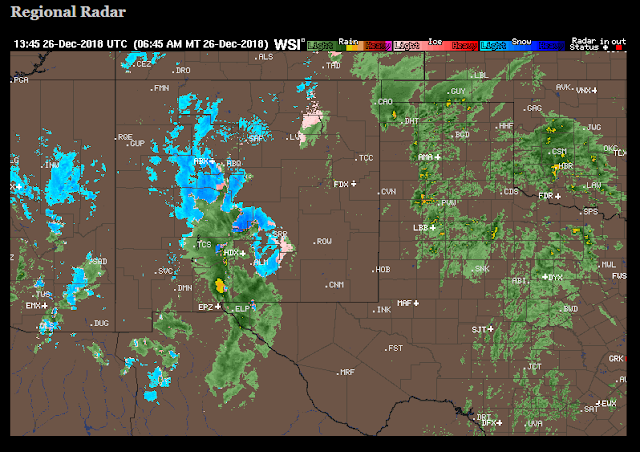 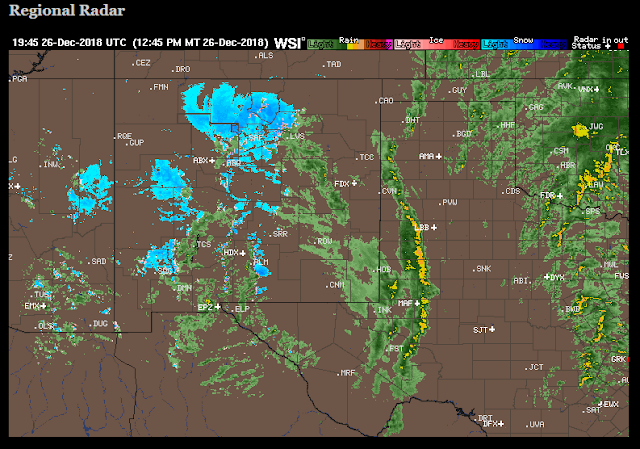 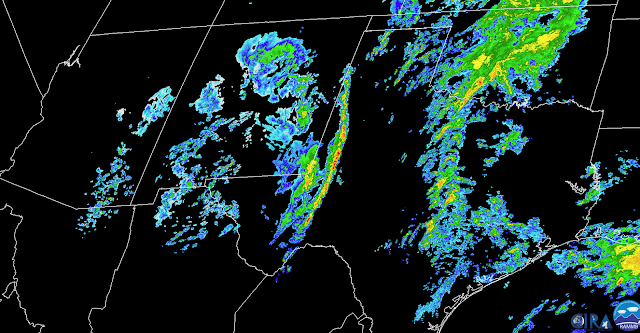 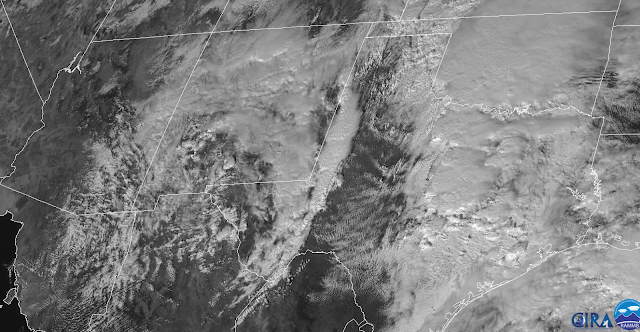 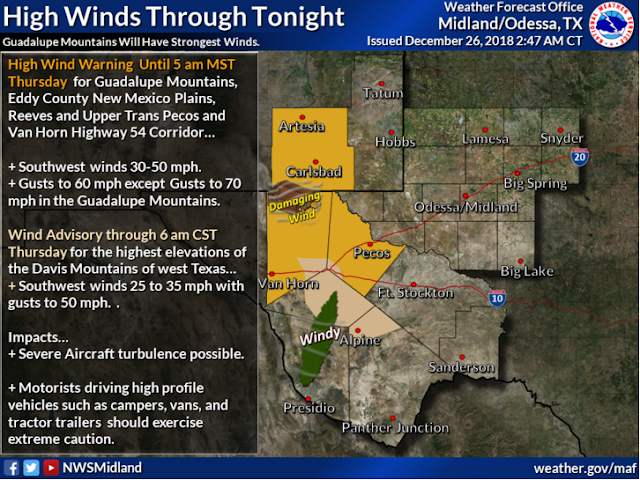 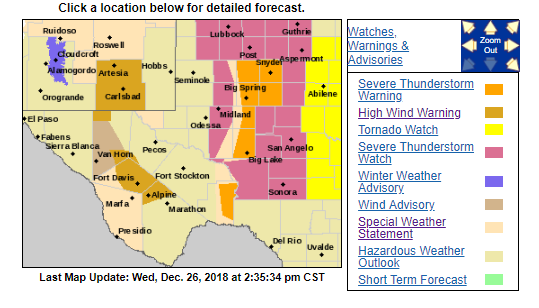 A High Wind Warning is in effect for Eddy County (including the Artesia and Carlsbad areas) from 9 AM MST this morning through 5 AM MST Thursday morning. Across the lower elevations of Eddy County southwesterly winds will rapidly increase with the Pacific frontal passage shorty and become sustained at 30-40 mph with gusts near 60 mph. In the Guadalupe Mountains these winds will become sustained at 30 to 50 mph with gusts near 70 mph. Localized areas of blowing dust may cause travel problems on some of our local roads and highways. Watch for those sudden drops in the visibility down to near zero with little to no advanced warning due to blowing dust. 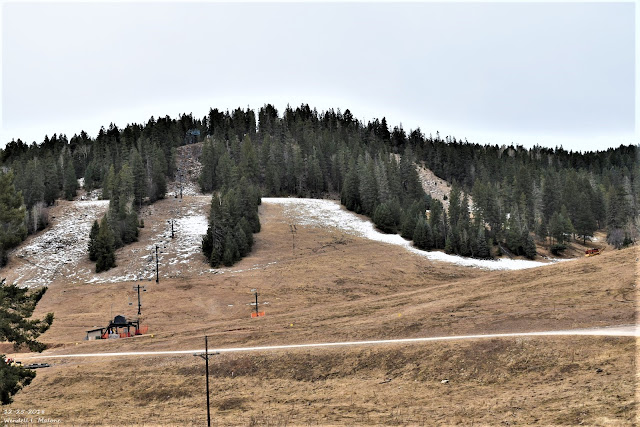 I took this photo Christmas afternoon on our way back to Carlsbad from Las Cruces where we spent Christmas Eve and Christmas with our youngest daughter and her family. November was colder and wetter than normal across the local area and looked promising as far as us having a cold and snowy winter. Then came December and it has been warmer than normal with a snow drought ongoing across New Mexico...especially in some of our mountain communities. That changes with today's winter storm. A second stronger and colder storm will impact the state Friday into Sunday with a third storm possibly the first to middle of next week. Overall the trend is for much colder weather to settle in with lots of snow over the next couple of weeks. Winter has arrived...just not this Christmas.

A Winter Weather Advisory remains in effect for the Southern Sacramento Mountains until 7 PM MST this evening. New snowfall totals are forecast to be around 3" to 6". 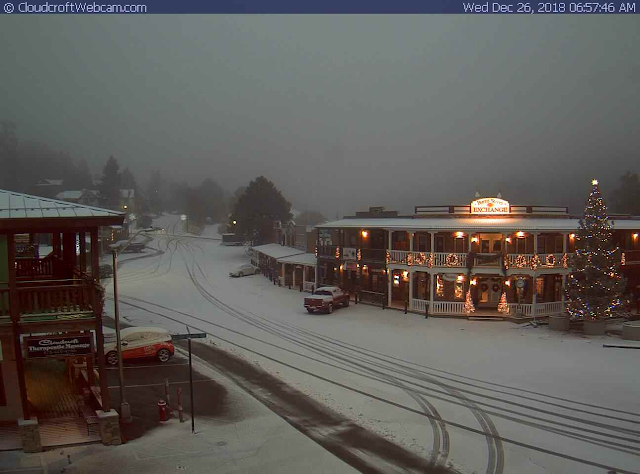 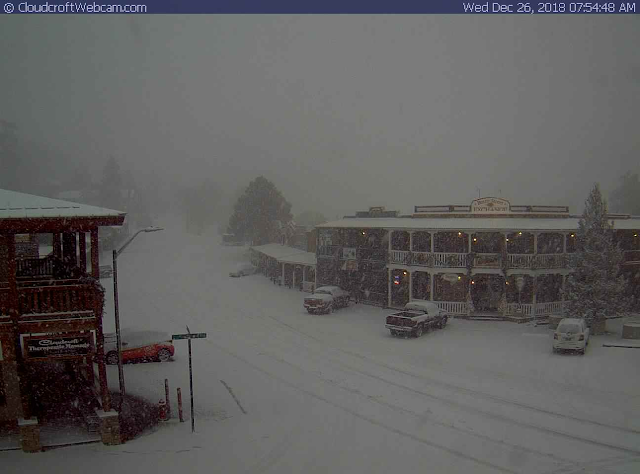 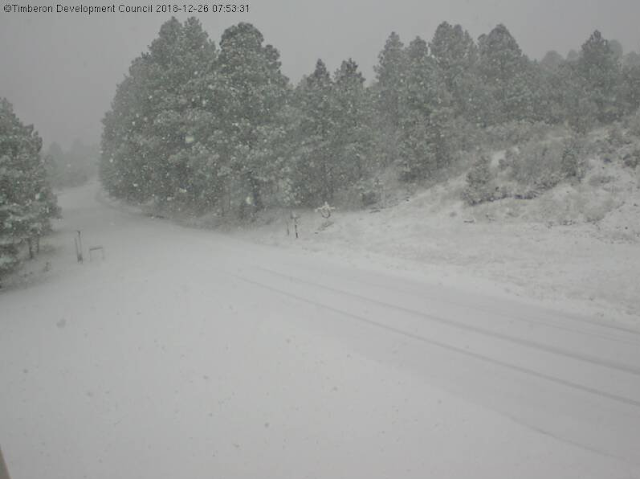 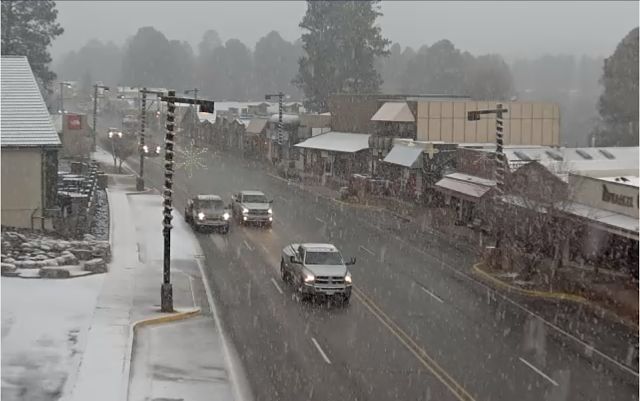 A Pacific cold front was moving into the Las Cruces and El Paso areas as of 6:30 AM MST this Wednesday morning. Meanwhile a closed upper level low at about 18,000' was located just south-southeast of Tuscon, Arizona near the Arizona/Mexico border and continues moving eastward.

Moderate to occasional pockets of heavy rain were moving into southern New Mexico.Meanwhile rain was in the process of mixing with and changing over to snow across the Sacramento Mountains at 6 AM. Web cams in Timberon, Cloudcroft, Ruidoso, and Ski Apache show snow falling at 7 AM. At 7:55 AM MST heavy snow was coming down in Cloudcroft

A few cloud to ground lightning strikes (thundersnow) were noted northwest of Alto at 6 AM. Hobbs reported a thunderstorm and fog at 4:35 AM.

As of 8 AM MST the Sunspot CoCoRaHS reported 6.8" of new snowfall. 4.0 miles east of Cloudcroft 3.5" was noted as of 8 AM. The Sierra Blanca Snotel was reporting 4" of new snow near Ski Apache as of 11 AM MST. 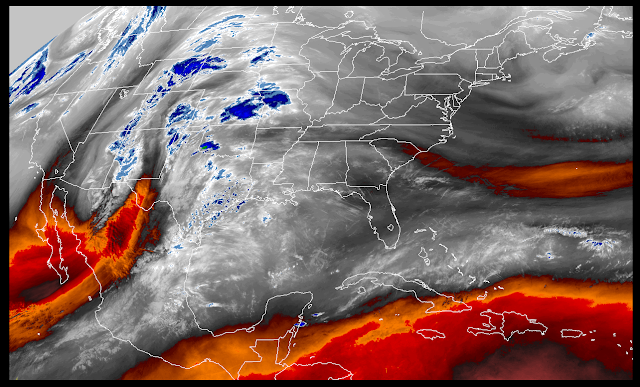 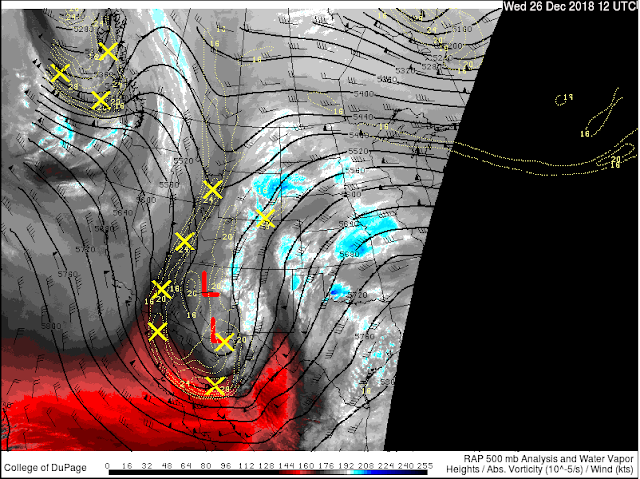 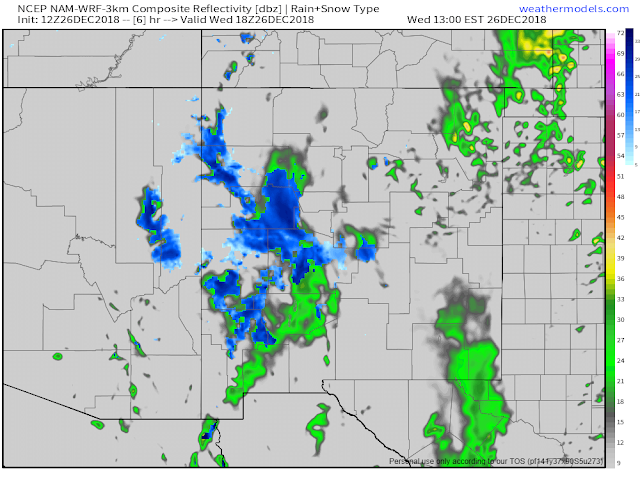 Valid At 11 AM MST This Wednesday Morning. 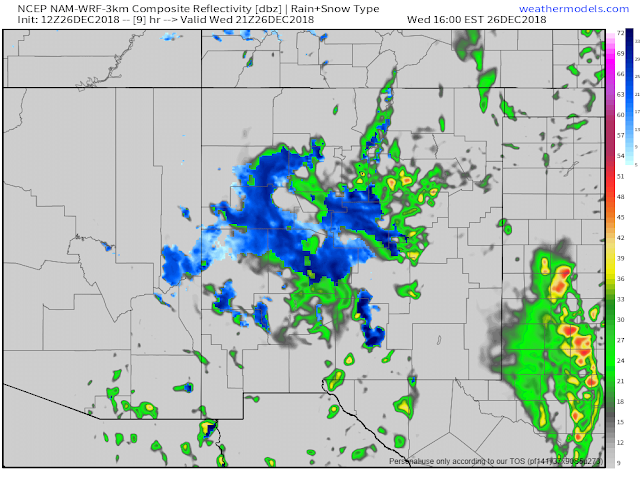 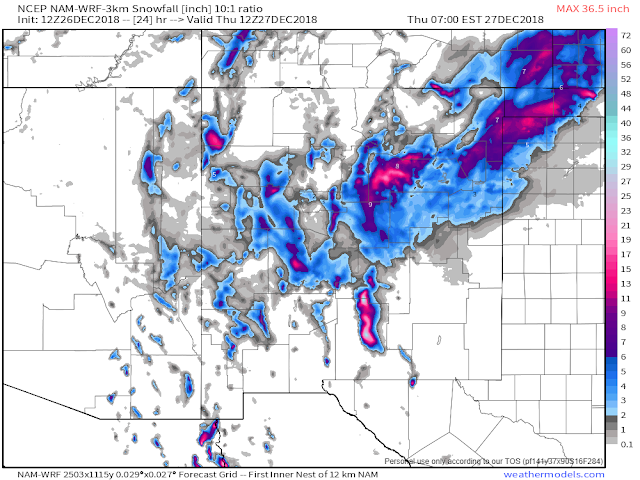 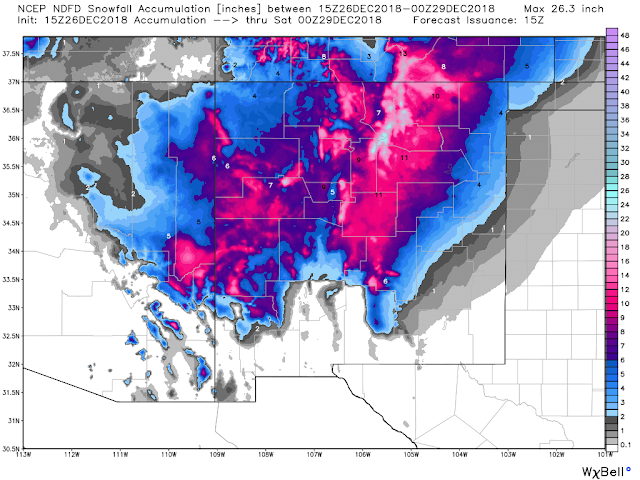 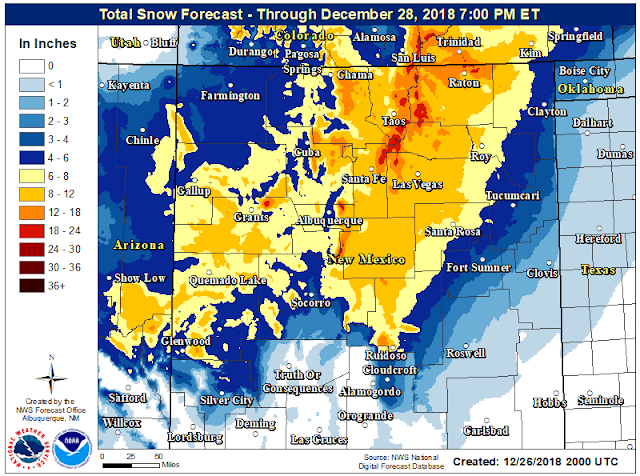 Scattered rain showers are forecast to develop across parts of Southeastern New Mexico around later this morning continuing this afternoon as the Pacific cold front to our west moves into the Pecos Valley and then eastward into West Texas late this afternoon.

Scattered thunderstorms some of which will be severe will likely break out this afternoon just east of the New Mexico/Texas state line and then race off to the east and northeast into Central and Northern Texas tonight.

Heavy snow now falling in the Sacramento Mountains will come to an end tonight. The official forecast calls for up to 6" across the higher peaks. Take a look at the NAM-WRF model storm total forecast graphic above.

No doubt that this model forecast appears to be way overdone with its snowfall forecasts. I seriously doubt that 2 feet of snow will fall in the Cloudcroft area by tonight. However...I hate saying that because mother nature loves to sucker punch us sometimes. Especially with these cold moist negatively tilted upper level troughs of low pressure currently southeast of Tuscon and headed our way. In fact the models think that this storm will deepen as it approaches SE NM by tonight. Cloudcroft's web cams are showing that snow continues to come down hard as of 8 AM this morning.

Having said that I don't believe the snowfall forecast totals on the graphic above but I also think that its entirely possible that the higher peaks of the Sacramento Mountains (roughly above 7,000') may get more than 6" of fresh snow out of this storm. A foot of snow does not seem out of the question. Time will tell. 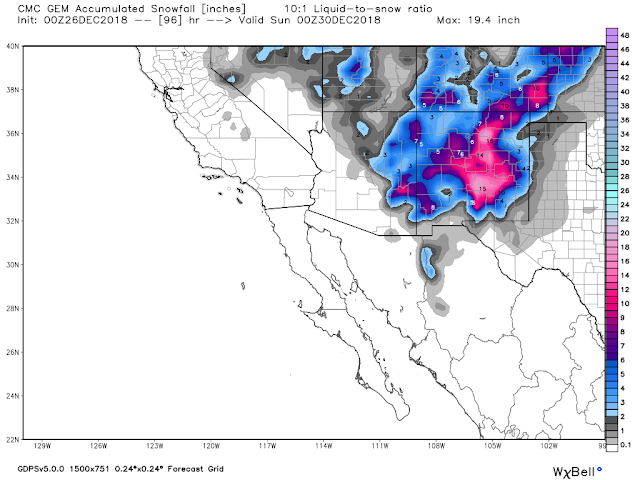 Last nights computer runs of the Canadian and European forecast models are indicating that our next winter storm to affect the state and local area Friday into Sunday at least will be colder, stronger, and wetter than today's storm. Both models get a little crazy with widespread heavy snowfall forecasts of a foot or more over the states mountains and over Central, Eastern, and parts of the Southeastern Plains by Saturday night at sunset. 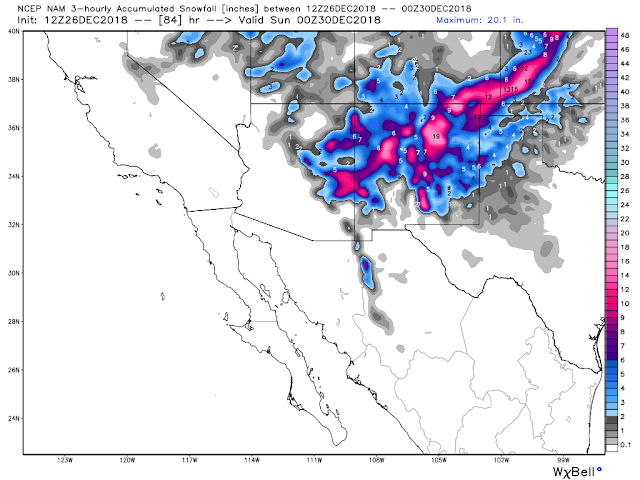 Major Winter Storm Shaping Up For The Weekend!

This mornings run of the NAM model adds support to the European and Canadian models forecasts as it too indicates that widespread heavy snow is on the way Friday into Saturday night. Some of the forecast models are hinting that locally we may drop below freezing on Friday and may not rise above freezing until the middle of next week.

So now is the time to get ready for a Significant/Major Winter Storm that will impact much of New Mexico and nearby areas Friday into the weekend and possibly longer! It appears that widespread travel problems may become a likely-hood over parts of the state today with the current storm. And especially with our next winter storm arriving Friday and continuing into the weekend!

Those of you who have livestock need to prepare now for the possibility of heavy snowfall and an extended period of very cold temperatures (this weekend into the middle of next week possibly).

The Truth Is Stranger Than Fiction - And Sometimes It Hurts!
on December 26, 2018
Posted by Wendell Malone