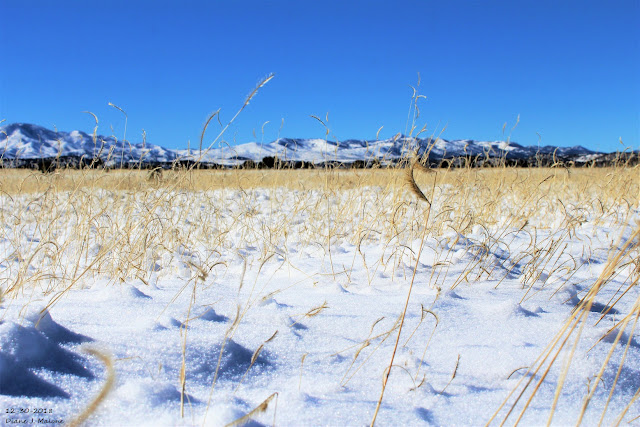 NWS Watches/Warnings In Effect
(As Of 11 AM MST). 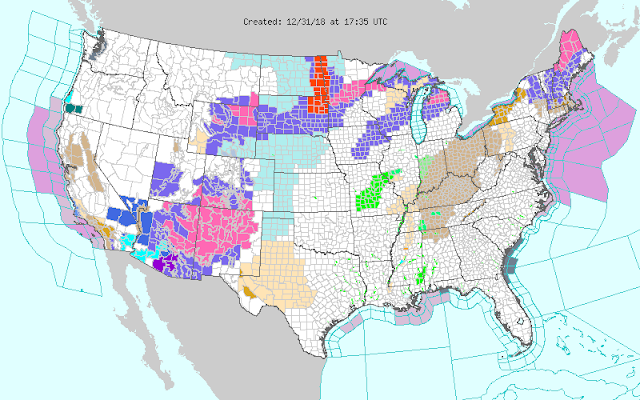 Click On The Link Above For The Latest Updated Information.
Then Click Anywhere On The Map That Your Are Interested In.
You Will Then Be Redirected To The Local National Weather Service Office.

Winter Storm Warnings, Winter Weather Advisories, Special Weather Statements, and Wind Chill Advisories are in effect for New Mexico and surrounding areas as of 11 AM MST this New Years Morning. 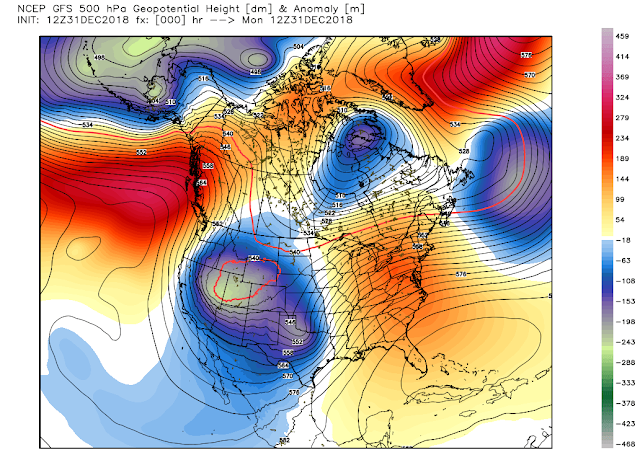 Valid At 5 AM MST This New Years Eve Morning.

Yet another very deep/strong (538dm at 18,000') and cold (-36ºC/-33ºF) upper level closed low is getting ready to wreck its havoc upon the Land of Enchantment today into at least Wednesday. Near sunrise this morning it was located over northern Utah. This upper level storm is colder than its two predecessors but (as of this morning) has less moisture to work with than our winter storm had a couple of days ago that buried parts of the state with heavy snow. 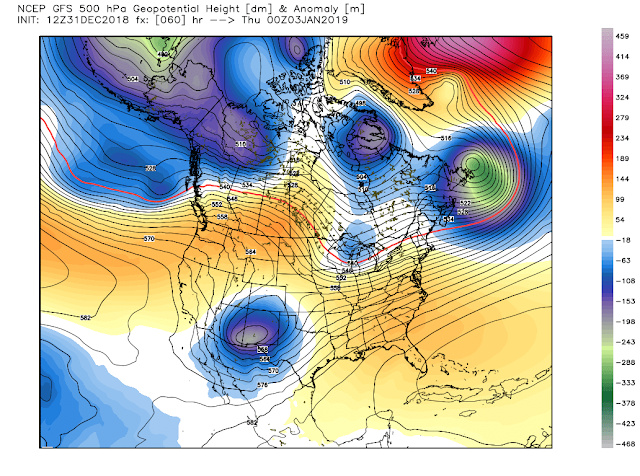 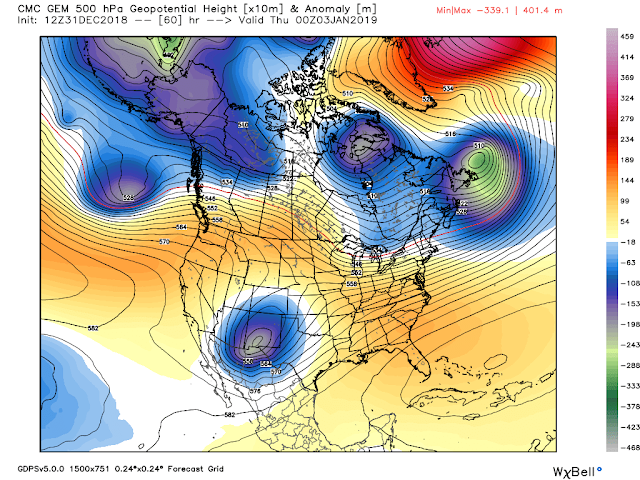 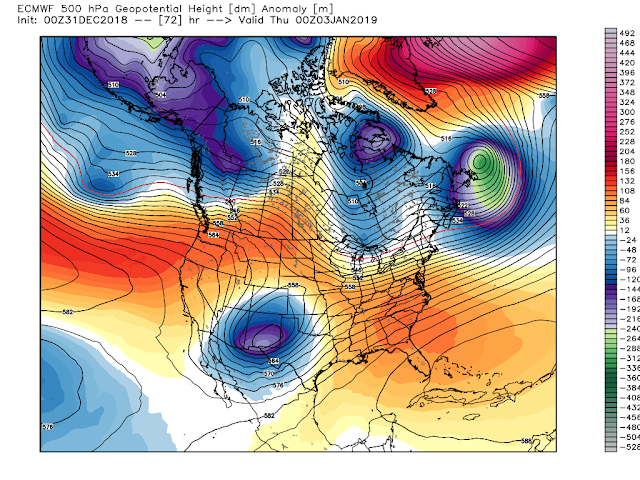 Like our most recent storm this one will be another slower mover too. Slowing moving or stationary closed or cutoff (cutoff from the jet stream) upper level lows are problems child's in the world of weather. They are notoriously hard to forecast and often present very challenging forecasting problems to those who are trying to forecast their associated weather.

Our last winter storm that unloaded heavy snow on parts of New Mexico a couple of days ago was one of these difficult storms. It was a very slow mover and for about twenty four hours just sat stationary near the Flagstaff, Arizona area. By the time begin to move far enough south to impact our weather here in far Southeastern New Mexico and parts of West Texas it had pretty much spent its best energy and moisture. That is also why some of our mountain communities like the Ruidoso and Cloudcroft areas got buried as well as other parts of the state.

All three of the long range forecast computer models (US GFS, the Canadian, and the European) are pretty close with their forecast locations and strength of this very cold closed low by sunset Wednesday. The medium range NAM model pretty much follows suit also. Last nights run of the European model had the center of the storm near Ruidoso at this time, the Canadian near Las Cruces, and the US model the GFS near Silver City.

Again as I often talk about its all about timing, location, track, and speed of these closed or cutoff upper level lows that play a major role in how our winter storms unfold across the state and nearby areas. This inbound storm is the coldest of the three so its likely to be the strongest. But as of this morning it does not have the mid-level to feed off of like our storm a couple of days ago did. This will play a role in limiting the overall snowfall totals. But...there always has to be a but in there somewhere right? But if this storm slows down, stalls, or ends up picking up more moisture then the snowfall from it could be heavier in some areas. If it heads further south than is currently forecast it would be in a better position to produce measurable snowfall here in Southeastern New Mexico.

US Temperatures At 10 AM MST. 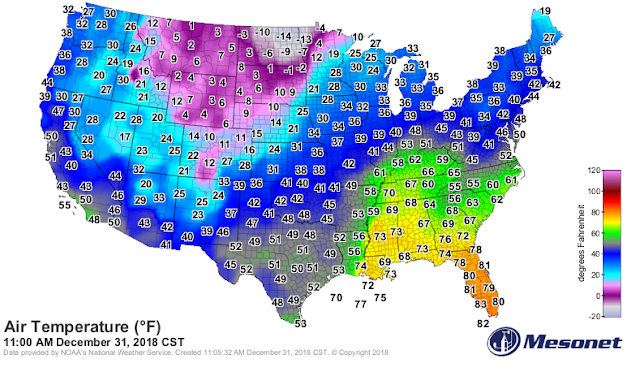 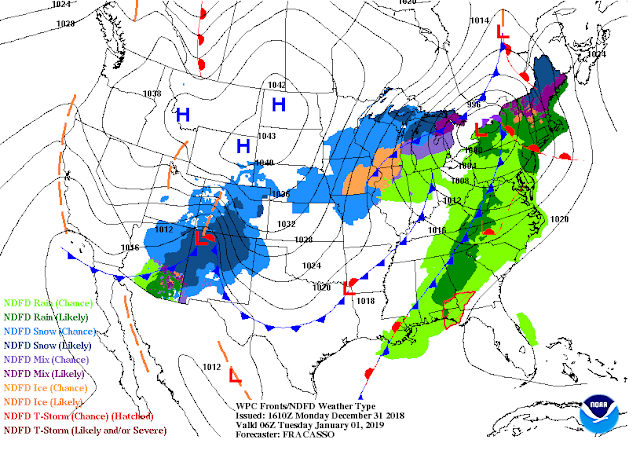 Since this storm is so cold at the mid and upper levels of the atmosphere this is also being reflected at the surface. A strong arctic cold front is forecast to move into Eastern New Mexico this afternoon and push southward and westward into Southeastern New Mexico and nearby West Texas by around sunset. It will back up against the central mountain chain and spill over into valleys to the west of the mountains tomorrow. Note the teens and single digit temperatures at 10 AM MST across Northeastern Colorado and Southeastern Wyoming. That's coming south. 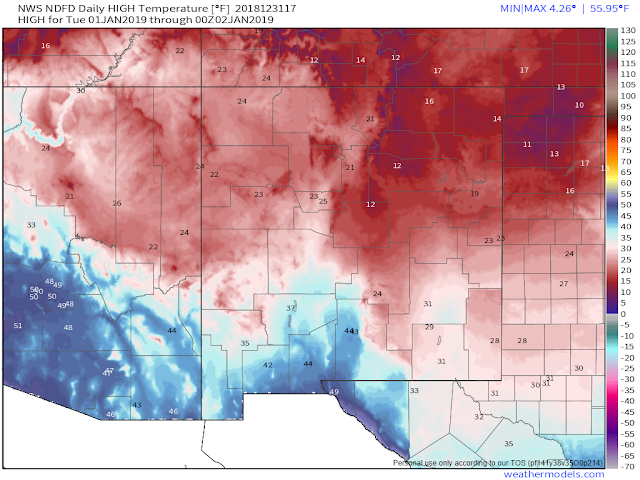 Once the arctic air mass arrives tonight we are going to see some pretty cold high temps for New Years Day. Locally here in Southeastern New Mexico the 20's to near 30ºF. Much of the state is expected to see the coldest temperatures of the season associated with this arctic air mass over the next couple of days. 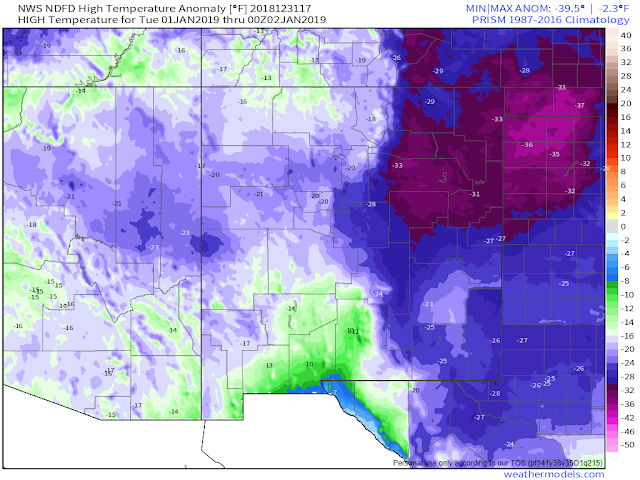 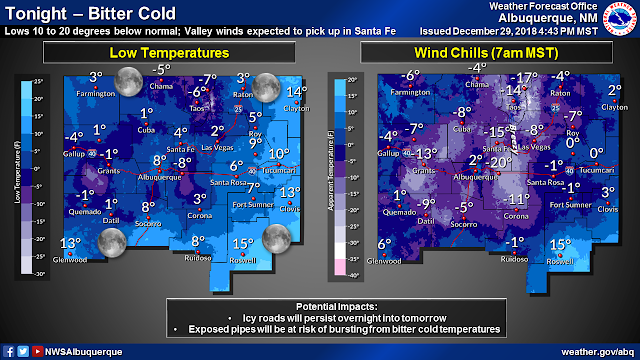 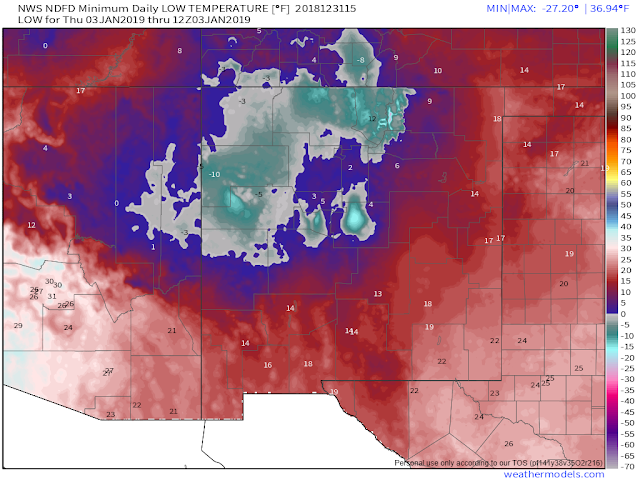 Depending upon just how much snow falls and where and how long this next winter storm sticks around will play a huge role in just cold we get when its all over with in a couple of days. Given the fact that many parts of the state has snow on the ground now this will factor in too. So in short don't be suprised if you end up getting colder than what is shown on this map. Its not entirely out of the question to think that we could at least see some lows locally near 10º or even a few single digit readings. Come Thursday morning parts of New Mexico may have some of the coldest temperatures in the nation. 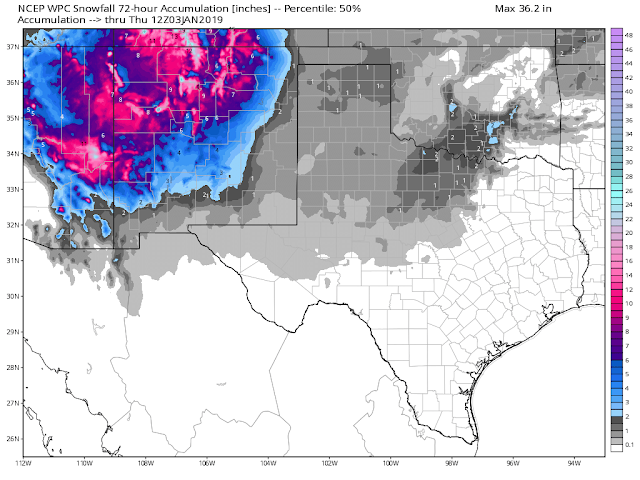 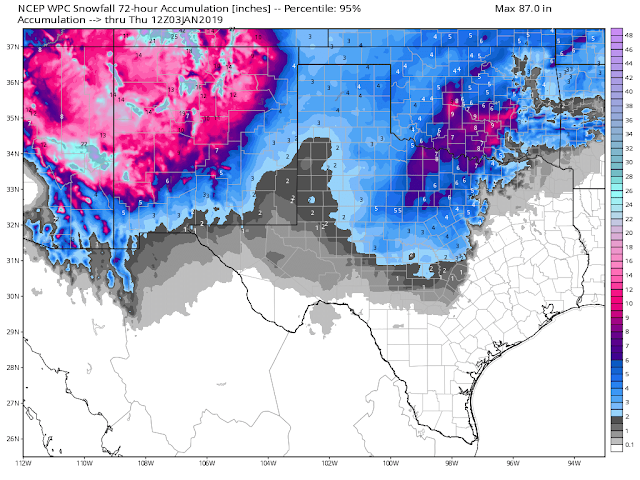 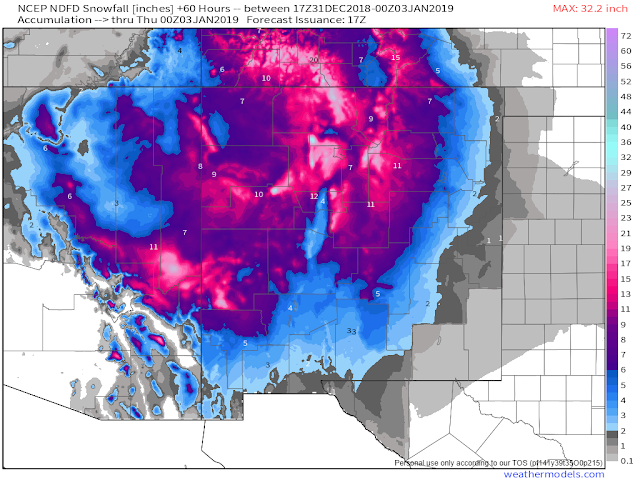 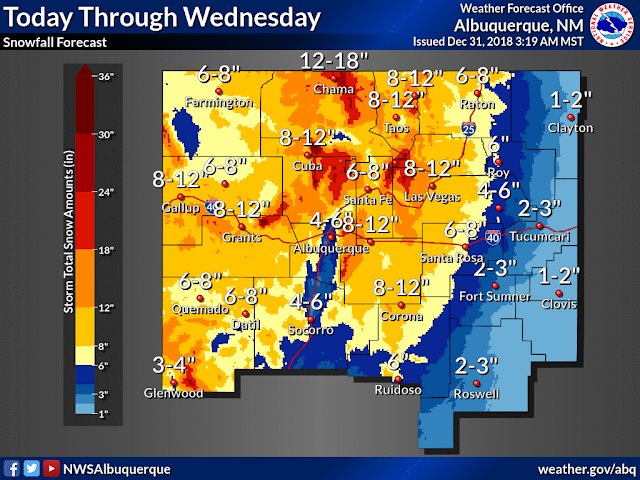 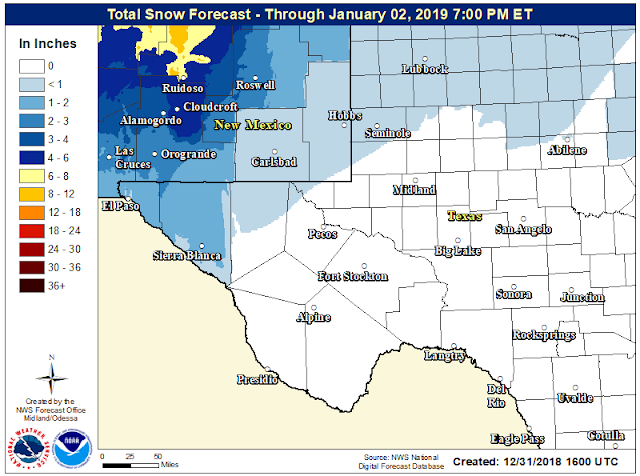 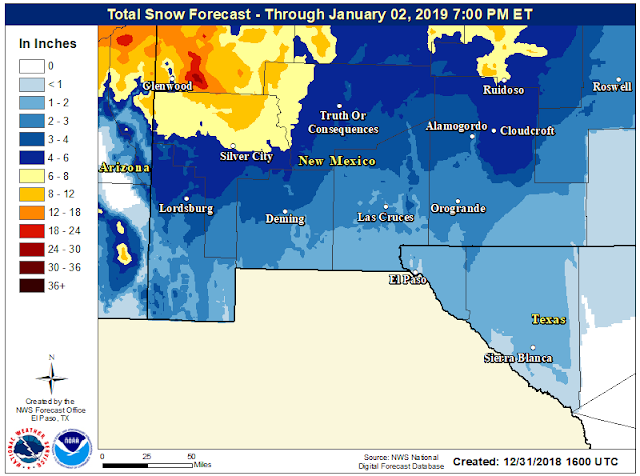 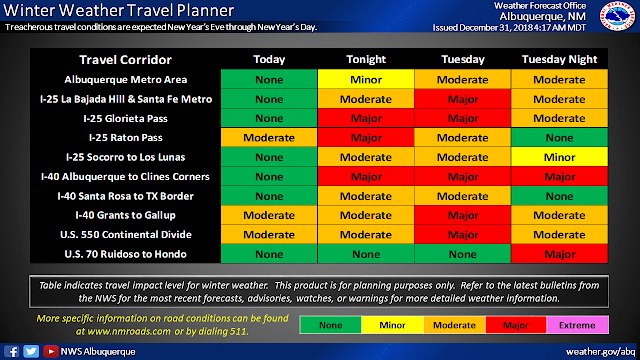 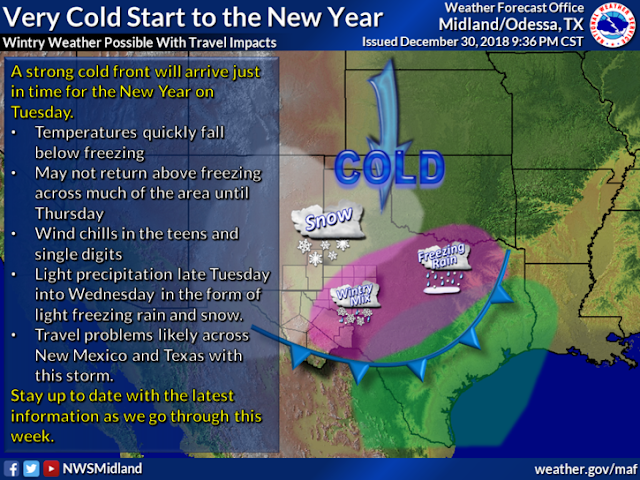 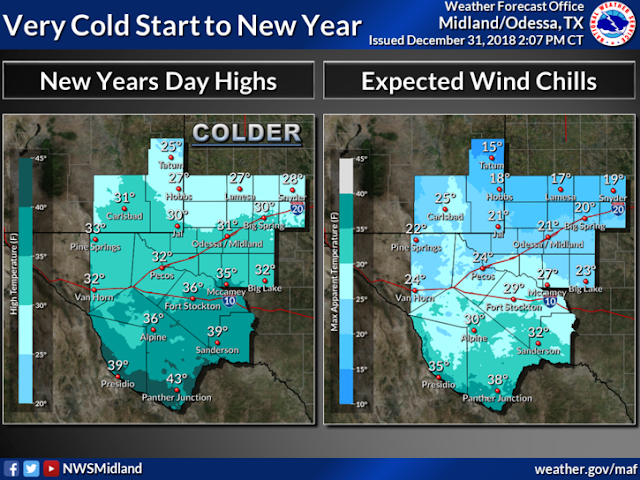 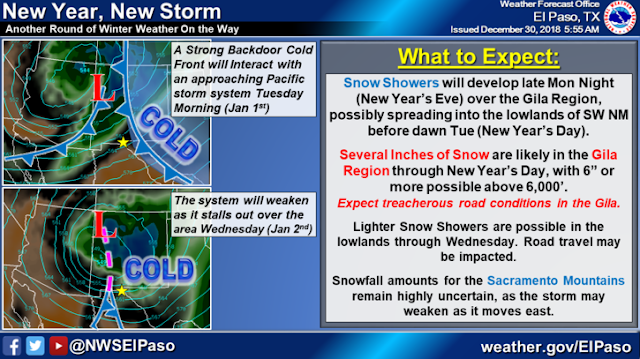 So the bottom line is be prepared for the possibility of some changes in the forecasts across the local area and state. There may be additional watches or warnings issued on this storm by our local National Weather Service Offices.

This is going to be another Major Winter Storm that is going to disrupt travel again in many areas of the state. Like the last storm a couple of days ago this one is going to produce some heavy to very heavy snowfall in some locations. Some of us in the state may end up getting more snow than is currently forecast (as of 11 AM MST this New Years Eve) and some of us may get less. This will highly dependent upon the exact track that this incoming Major Winter Storm takes, and or if it stalls, and or even speeds up some.

There will likely be some road closures in those areas that get hit with the heavy snow, blowing snow, and drifting snow. With the bitter cold and brutal wind chills combining with the heavy to very heavy snowfall you may be taking your life in your hands and those traveling with you should you venture out on our open highways and roadways during the height of this winter storm! In these areas it might be a good idea to travel only if absolutely necessary.

Click On The Links For The Latest Updated Info.

Winter Weather Advisories are in effect for late tonight into Midnight Tuesday for-
(Including The Ruidoso, Capitan, Carrizo, Tularosa, and Hondo Areas).

Check back for later updates as this is an ongoing and fluid situation.