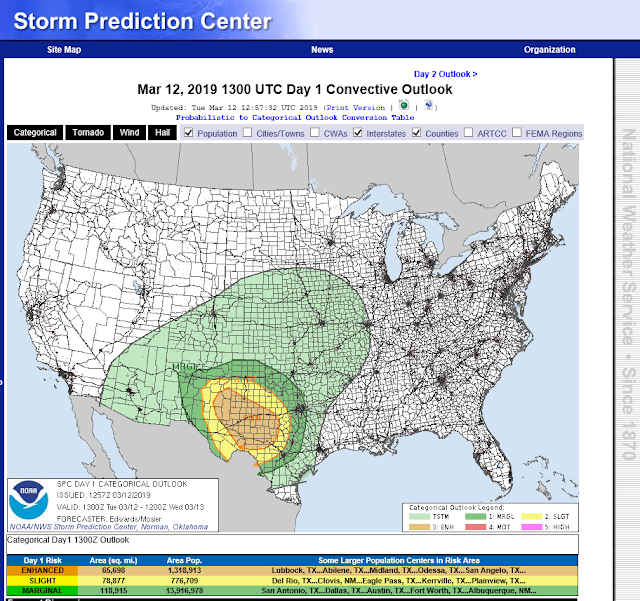 ...THERE IS AN ENHANCED RISK OF SEVERE THUNDERSTORMS OVER PARTS OF
SOUTHEASTERN NEW MEXICO AND WEST-CENTRAL/SOUTHWEST TEXAS...

...SUMMARY...
Thunderstorms should produce large hail, damaging wind and a few
tornadoes this afternoon over parts of southeastern New Mexico and
far west Texas.  The threat will transition mostly to severe wind as
a complex of storms crosses west-central Texas tonight.

...Synopsis...
A progressive and rather highly amplified pattern will characterize
the mid/upper levels over the CONUS.  A strong shortwave trough --
now apparent in moisture-channel imagery near the coastal Pacific
Northwest -- is forecast to dig southeastward over the western Great
Basin and Sierra Nevada to the LAS/IGM region through the period.
As this occurs, the initially slow-moving, well-defined, synoptic-
scale cyclone centered over northern Baja is forecast to accelerate
east-northeastward to northeastward.  The associated 500-mb low
should reach the RTN/CAO area of northeastern NM by 12Z, with trough
extending down the TX/NM border and across the lower Pecos River to
the Big Bend region and north-central MX.

The cyclone aloft will be flanked by anomalously intense winds at
all levels, especially in its eastern semicircle this period.  That
should including a 130-145-kt 250-mb jet with difluent flow
spreading across the outlook area from late afternoon through
evening.  500-mb flow over parts of this the region should
strengthen to over 100 kt between 00-06Z, while a 60-75-kt southerly
LLJ and associated strong moisture-transport/warm-advection regime
develop from south-central TX and the Hill Country to central OK.

At the surface, 11Z analysis showed a wavy/quasistationary frontal
zone across the LA shelf waters to the middle TX coast, to near COT
and across northern Coahuila, becoming diffuse near the Rio Grande
between the Big Bend and ELP.  Remnants of this front will shift
northward across west TX through the period, while lee troughing/
cyclogenesis will intensify in response to the approaching cyclone
aloft.  The associated surface low will form and deepen considerably
over northeastern CO through the period before deepening much
further and ejecting across western KS day-2.

...Eastern NM and west TX...
Surface-based thunderstorms are expected to develop initially in
mid/late afternoon in a broken arc from central/northwestern NM
(where instability will be weak) to higher terrain from south-
central/southeastern NM in far west TX (Guadalupe/Davis/Chisos
Mountains and vicinity).  Initially some of this activity should be
discrete, yielding fast-moving supercells, some leftward/
anticyclonic, with large hail.  Potentially significant and
destructive hail over 2 inches in diameter is possible over the
newly outlined area, given the strong shear, early supercell modes,
steep low/middle-level lapse rates, and favorable inflow-layer water
content.  A few tornadoes also are possible, along with severe
gusts.

With time this evening, a well-organized squall line is expected to
form, overtaking remaining supercells as it sweeps eastward and
lengthens across extreme eastern NM and west TX.  Embedded
supercells and bow/LEWP formations are probable.  The dominant
threat in that mode will become severe wind, with a few brief QLCS
tornadoes possible as activity moves into a marginally unstable but
high-SRH boundary layer near the western rim of the LLJ.  The
complex should persist across the Edwards Plateau and Hill Country,
with at least marginal/conditional wind threat as far east as near
the I-35 urban corridor from the Metroplex to SAT late overnight.

Given the strength of the ambient flow, favorable storm-relative
flow in low levels, potential forced ascent of increasingly moist
boundary layer, and possibility of intense rear-inflow jet formation
in such a complex, significant-severe (hurricane-force) gusts cannot
be ruled out over some of southeastern NM and west TX.  However,
confidence is not as strong yet on that outcome as with the
significant hail earlier, due to concerns over weakness of low-level
lapse rates and 0-3-km CAPE with eastward extent after dark.  Such a
risk area may be needed in future updates.