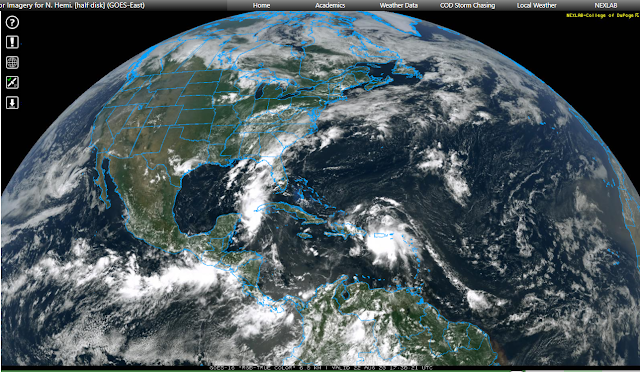 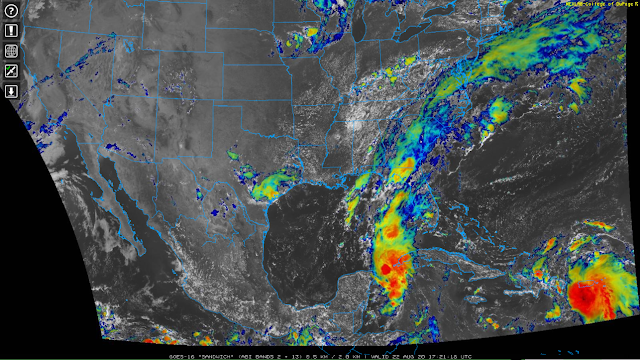 COD GOES-16 Satellite Images.
(11:30 AM MDT Saturday, August 22, 2020).
Looking at the latest visible and sandwich satellite images of Tropical Storms Laura and Marco just before noontime today (Saturday) it's evident that Marco isn't as impressive looking as Laura is. But looks are deceiving. Marco is rapidly strengthening as he pulls away from the Yucatan Penisula. Will one or both of these Tropical Storms become Major Hurricanes once they enter the Gulf of Mexico and tap these bathtub-like water temperatures? Or will they track close enough to disrupt the flow around each other weakening one or both of them? 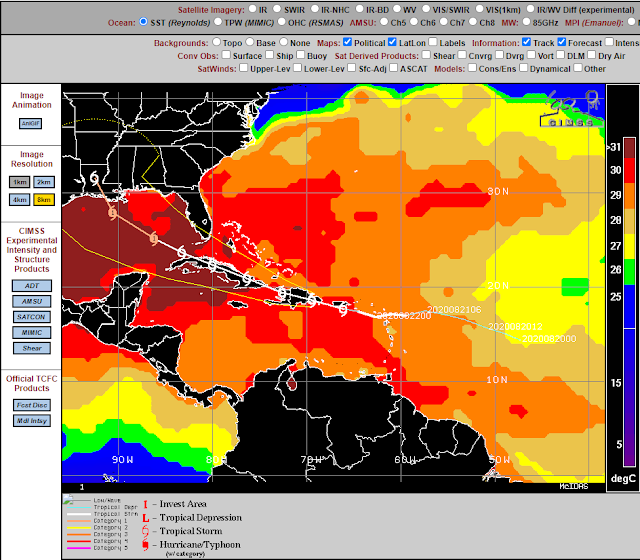 Satellite Graphic Of Sea Water Temperatures.
(11:30 AM MDT Saturday, August 22, 2020).
Water temperatures in the Gulf of Mexico are just about as warm as they get. The darker red shade indicates temperatures of 31ºC or 88ºF. Wind shear in the Gulf of Mexico is minimal also so the environment is near perfect for the continued development of these two approaching Tropical Storms.
National Hurricane Center Updates.
Tropical Storm Laura. 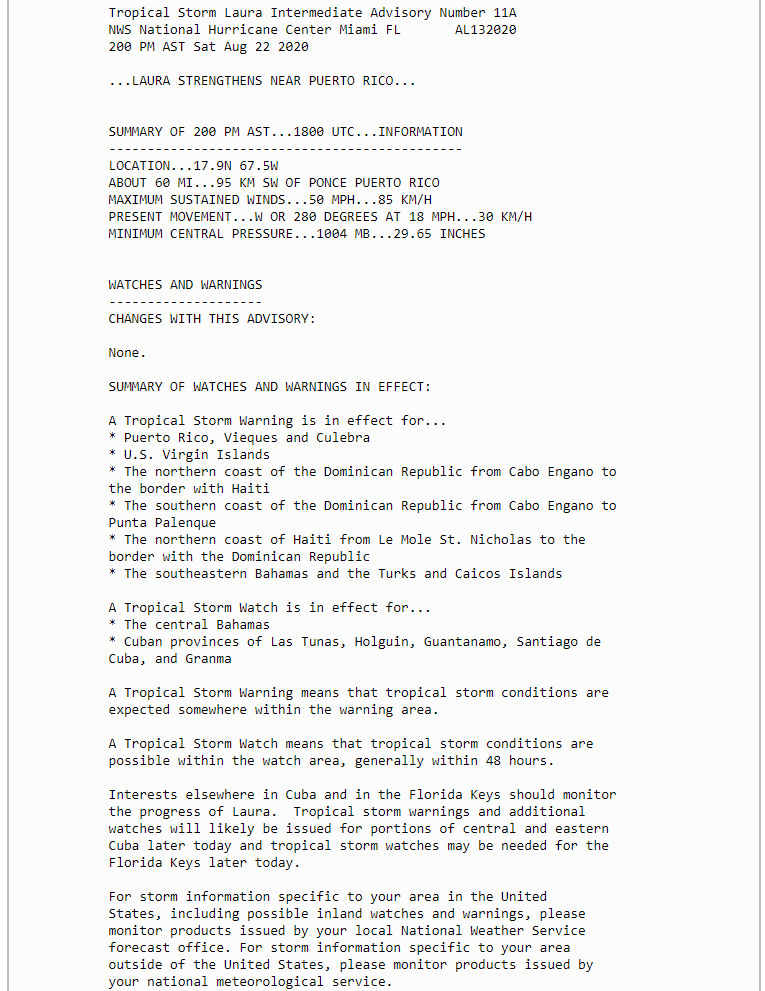 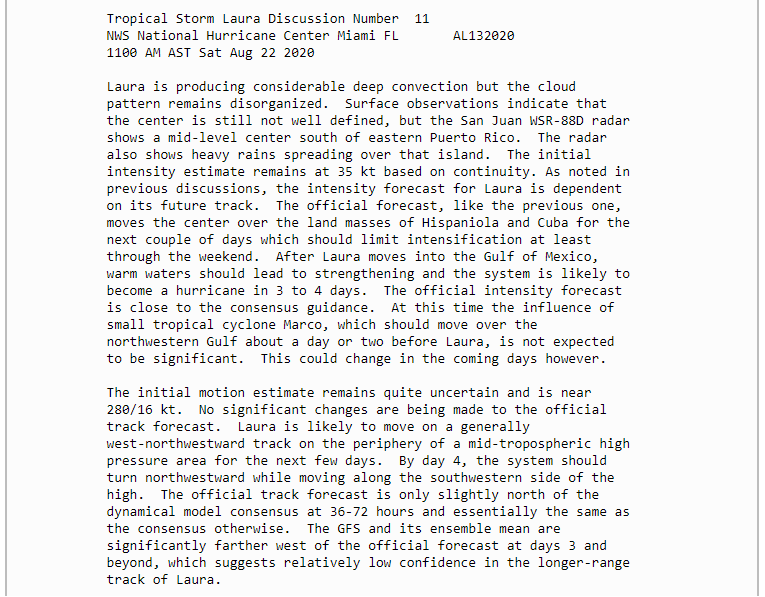 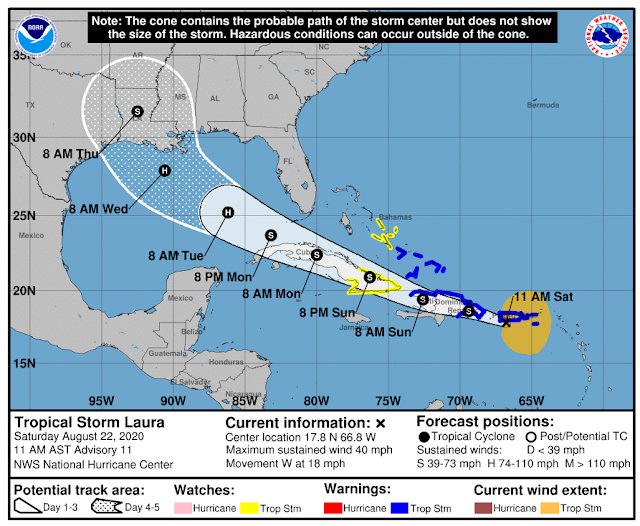 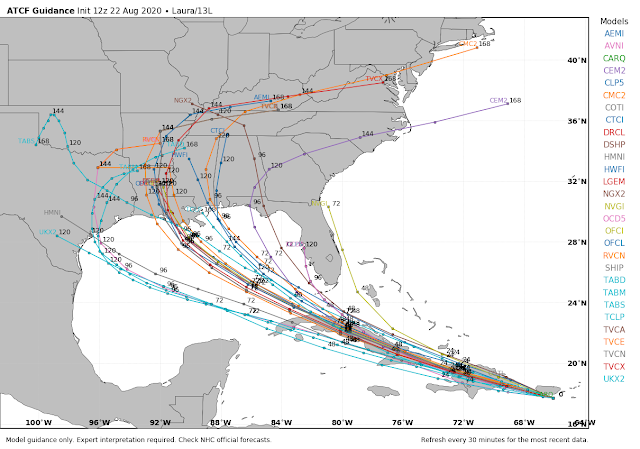 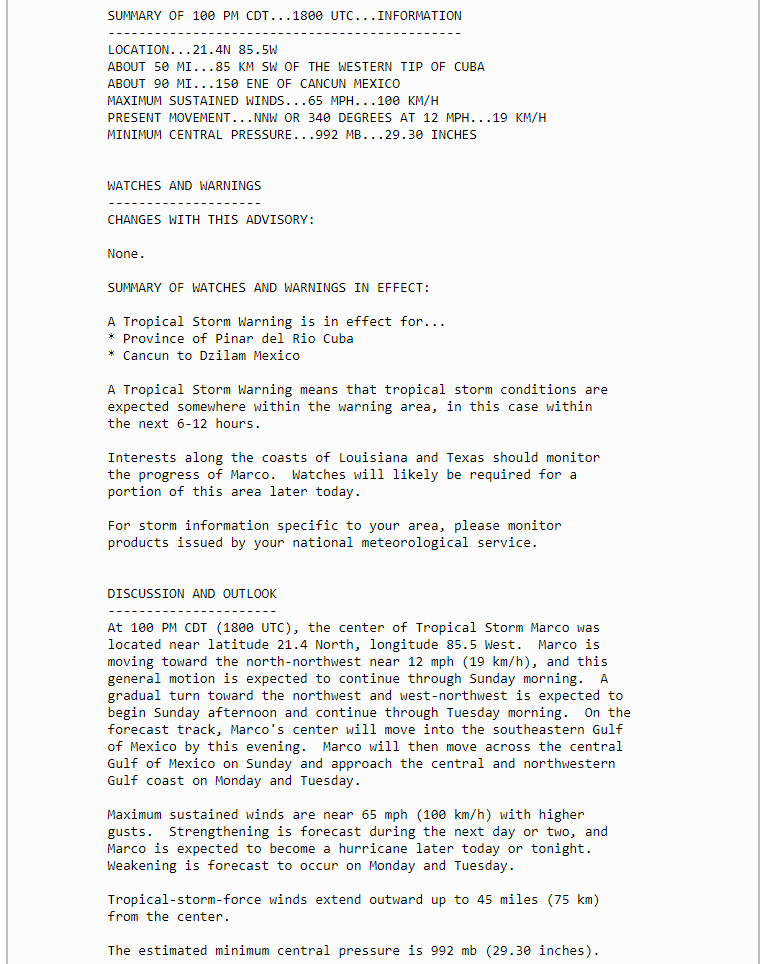 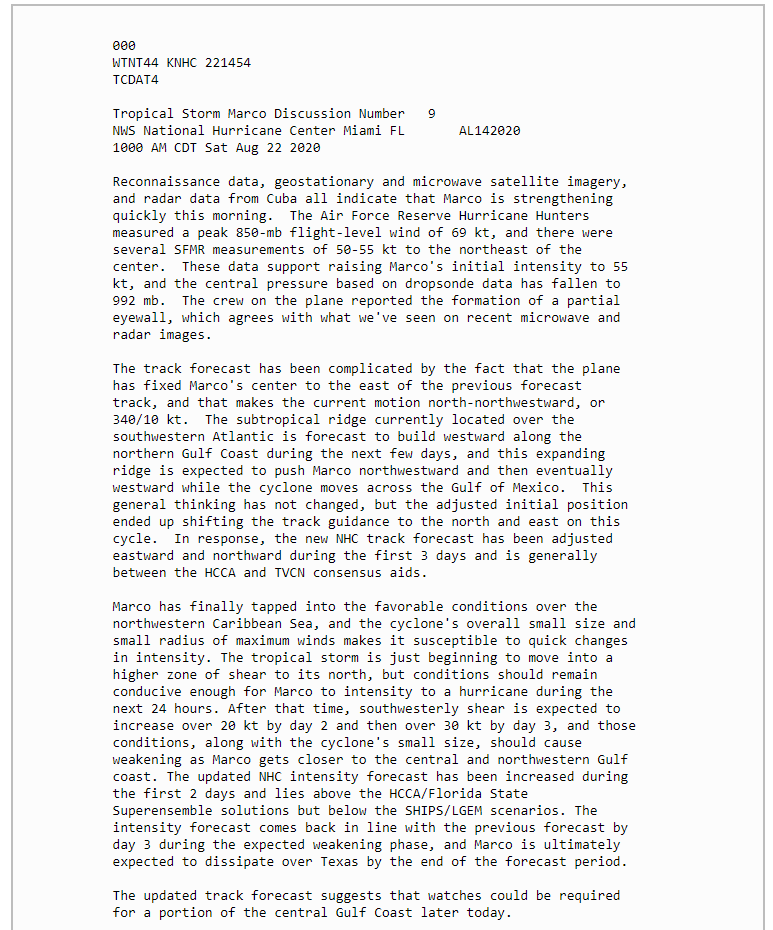 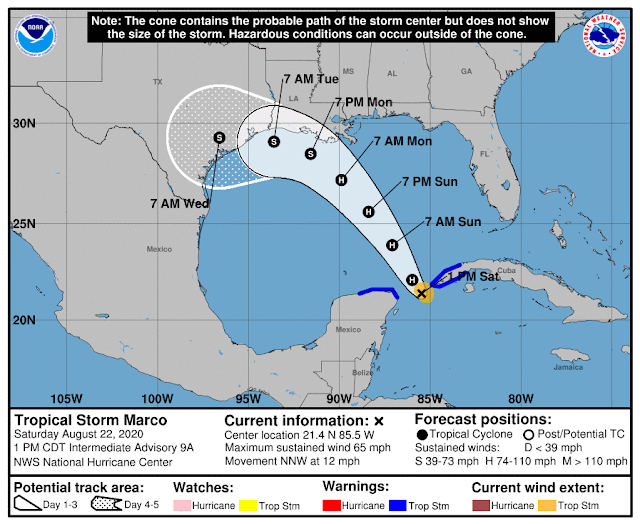 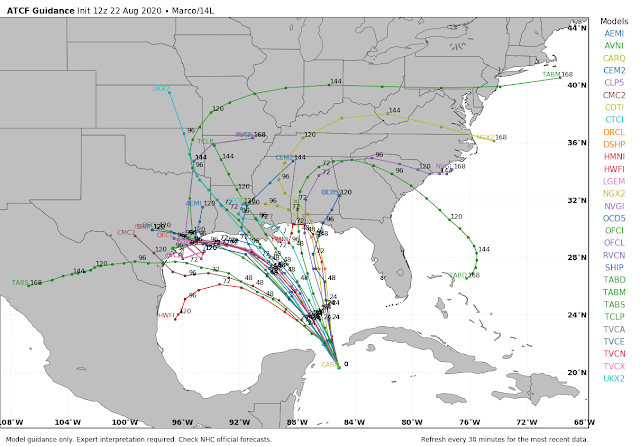 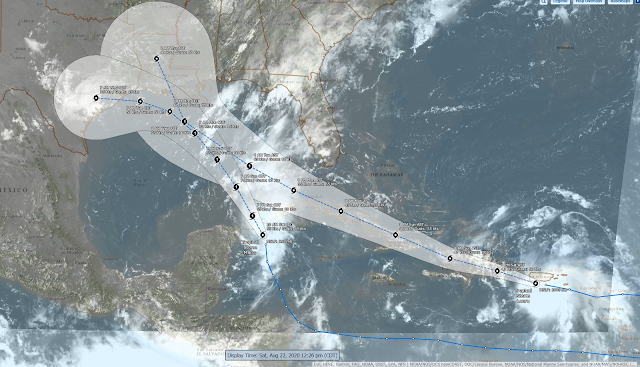 Tropical Storm #Marco and #Laura have set their eyes on the Gulf Coast. While the tracks do overlap the timing of when they will be in those spots differ. If you have interests along the TX/LA coasts now is the time to prepare. For the latest info visit: http://hurricanes.gov 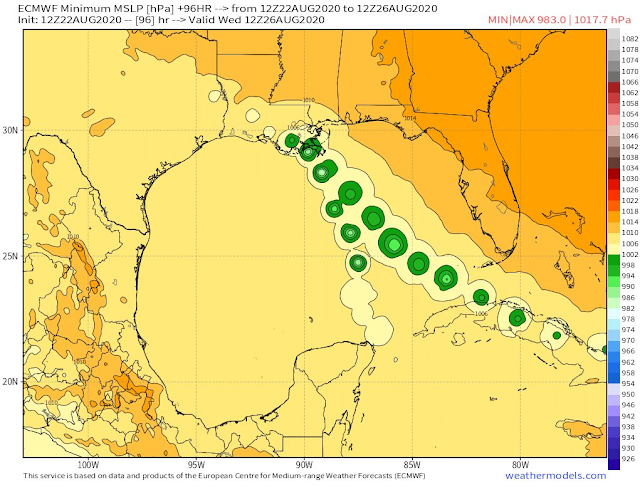 Ryan Maue
@RyanMaue
Level 1:
Convergence ... two days apart along Louisiana coast. Tracks crossing is rare in the Atlantic so soon but happens more frequently with Typhoons in the much busier Western Pacific. Stay in your lane.

New Euro model data:
Next Week Has Many Unknows For The Gulf Storms!
To try and speculate on what the eventual outcome of these two Tropical Storms will be is an utterly useless effort at this time. Uncertainties abound concerning the tracks and eventual strengths of these two cyclones. Please don't buy into the media hype that having two Tropical Storms is a first-ever event and the result of Climate Change. This simply a lie and the last time this happened was in 1933. Keep checking back for updates as we head into next week.
Local Rainfall Overnight.
SE NM 24-Hour CoCoRaHS Rainfall Reports. 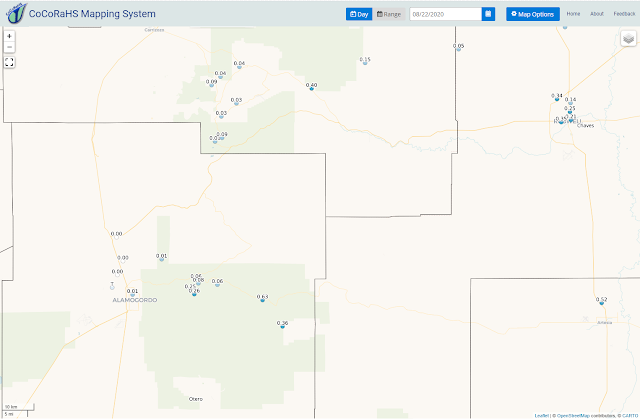 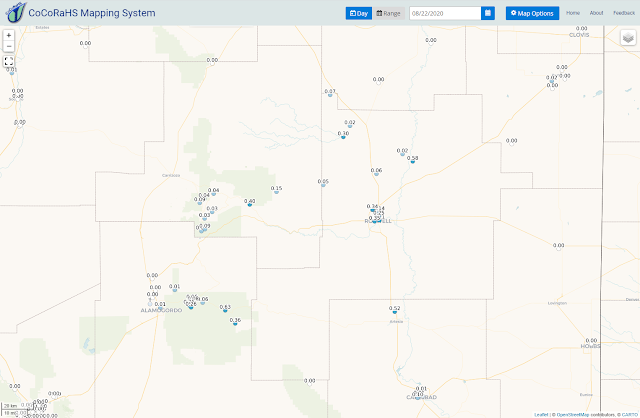 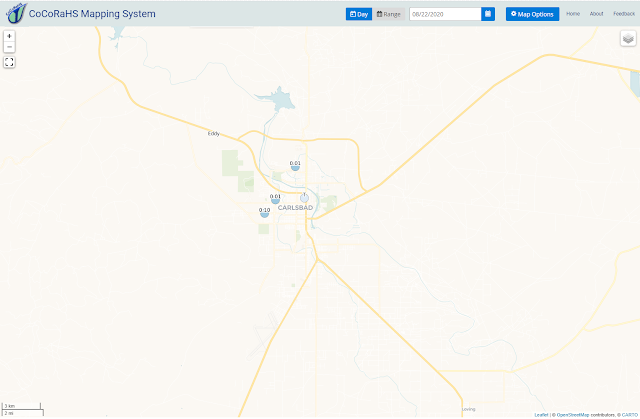 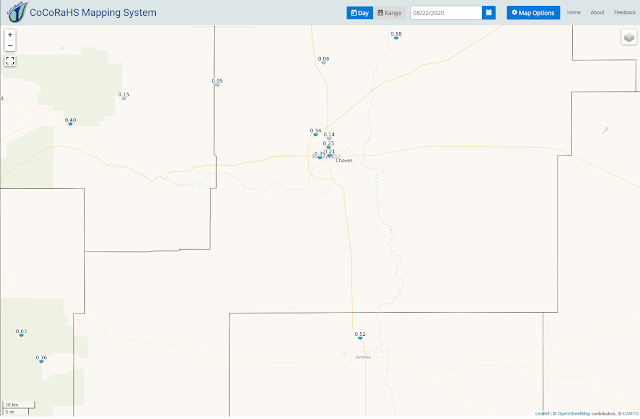 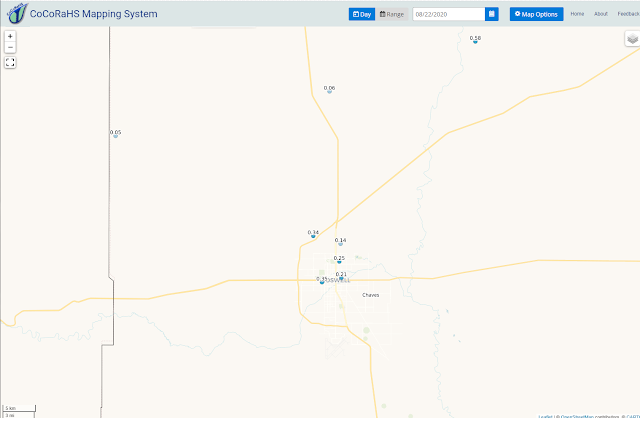 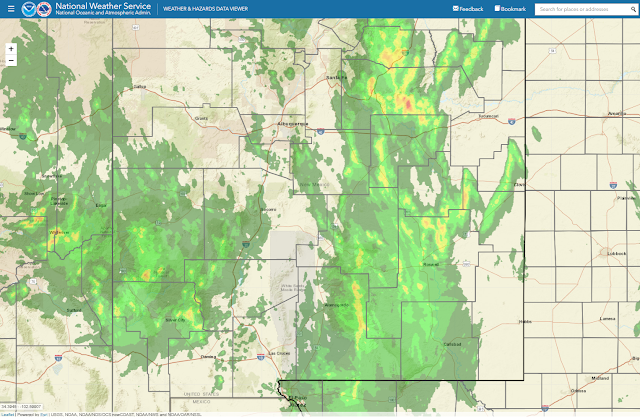 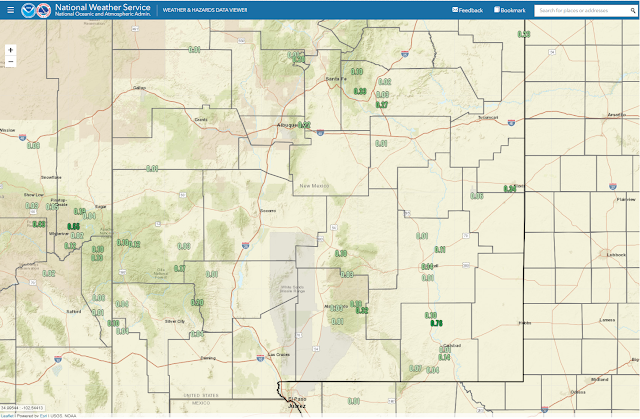 Overnight another cluster of scattered thunderstorms moved south down the eastern plains and into Southeastern New Mexico just before and after midnight. The AG Science Center automated weather station 6 miles south of Artesia reported .76". We got a mere .01" here at our home in Carlsbad. Hit and mostly miss thunderstorms have ruled the summer except for in the mountains.
The Truth Is Stranger Than Fiction!
Email Post