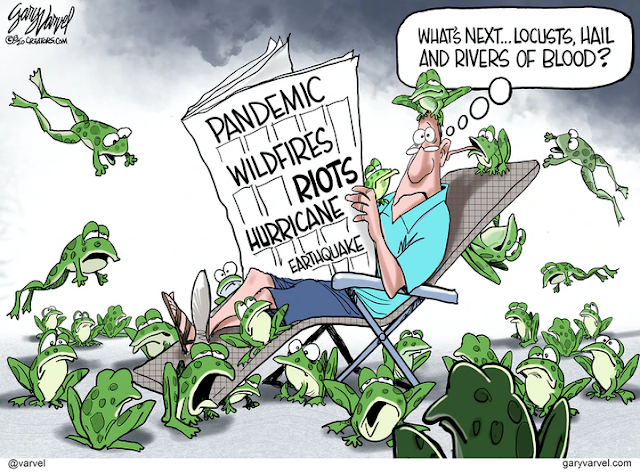 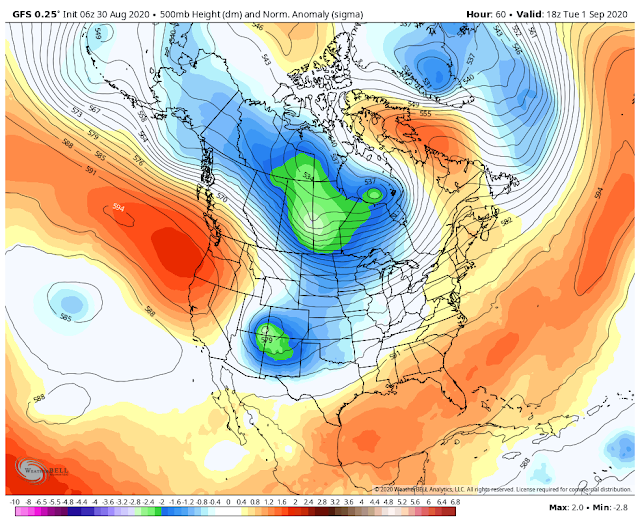 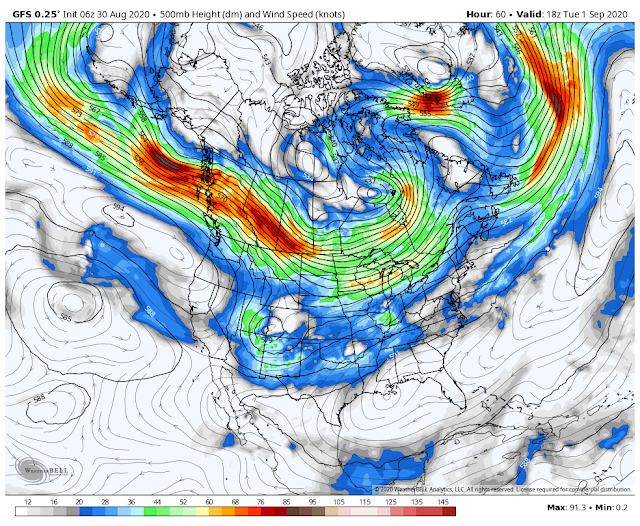 Valid At Noon MDT Tuesday, September 1, 2020.
Changes Blowin In The Wind.
That heading is literal as the Jet Stream is starting to get active once again. Computer models forecast a mid and upper-level trough of low pressure to dive southeastward out of the Pacific Northwest and into the Four Corners area by Tuesday. The GFS wants to open up a closed low and move it across the state. The European and Canadian models drop it further back to the west into Arizona and stall it. Either way, our chances for cooler and wetter weather are going to increase the first to middle of the upcoming work week.
As we head into the meteorological fall (begins Tuesday) the Jet Stream will increasingly become more active and dig further and further to the south. Eventually displacing the summer heat ridge that has baked us all summer. A change is underway...here comes fall. I'm not saying we are done with our 100º temps, but gradually with time, we will begin to cool down.
The average high/low temperatures for August 30th:
Roswell is 90º/64º
Artesia 92º/61º
Hope 90º/62º
Carlsbad 92º/65º
Hobbs 91º/65º
Ruidoso 78º/49º
Cloudcroft 69º/45º
Mountain Park 79º/55º
Elk 80º/51º
Alamogordo 93º/60º
Weak Cold Front Arrives Monday Evening. 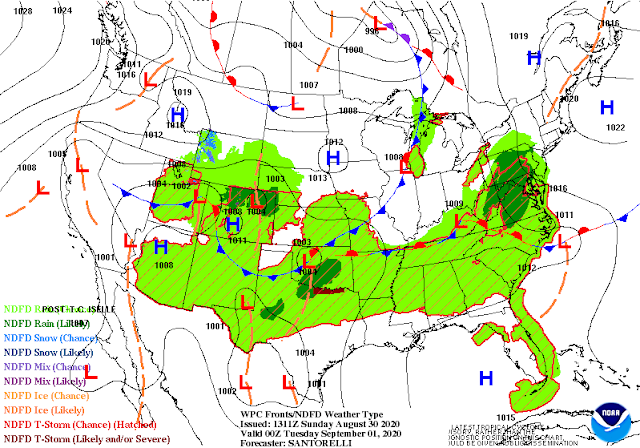 A weak cold front will dig southward into the local area Monday evening in conjunction with the approaching mid-upper level trough. This will knock our high temperatures back down into the low 90's to the mid 90's, for the most part, Monday into Wednesday. Highs in the mountains will range from the upper 70's to the low 80's in the Ruidoso and Mayhill areas, to the upper 60's to the mid 70's in the Cloudcroft and Sunspot areas. A second cold front is forecast to enter the area on Tuesday.
NWS NDFD Forecast High Temperatures.
Today. 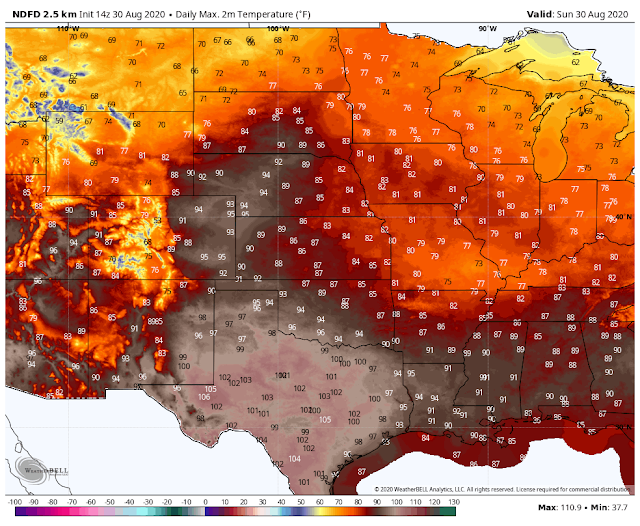 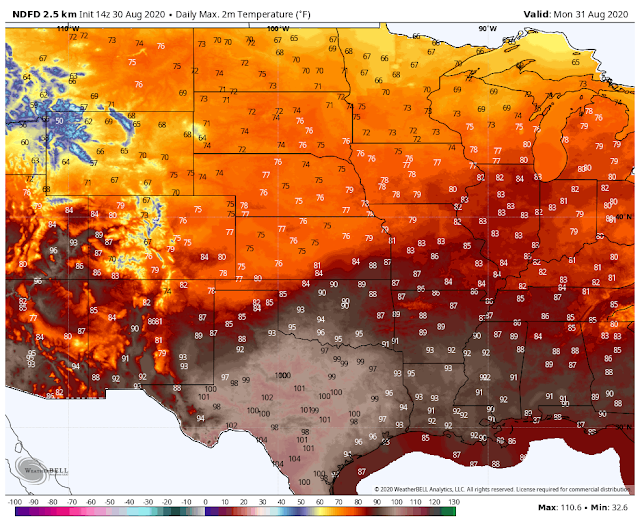 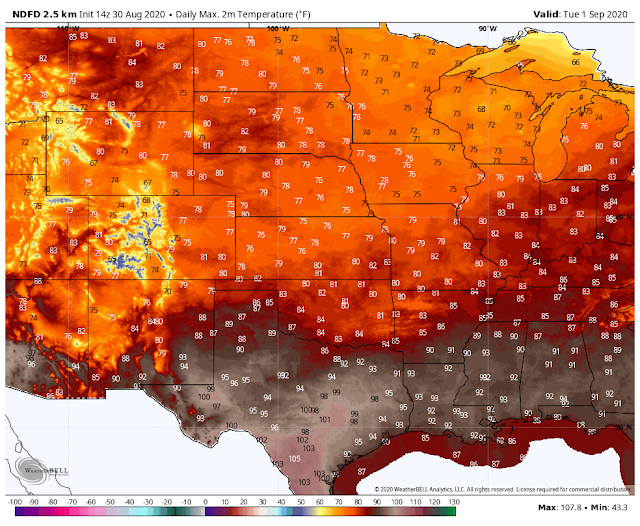 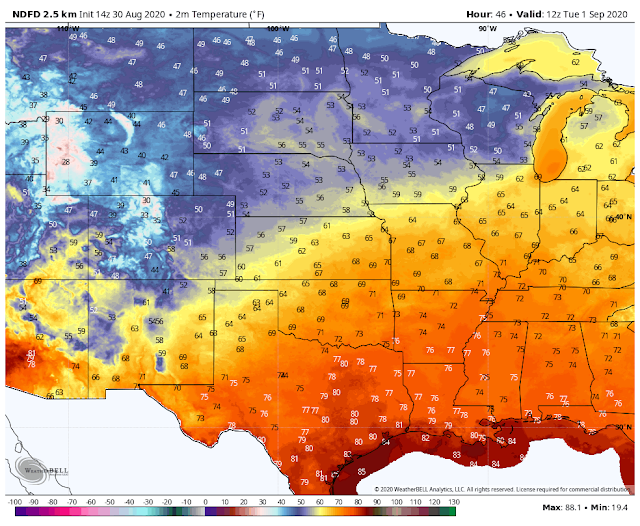 Notice the moring low temperatures that are forecast over the northern plains Tuesday morning, the 40's and 50's. And the 20's and 30's across the higher elevations of the Rockies. Cloudcroft has already dipped down to 42ºF for a low on the 18th of this month. So our nights have started the process of cooling off. Now to get our daytime high temperatures down into the upper 80's to low 90's instead of the low 100's.
NWS NDFD Forecast Rainfall Totals. 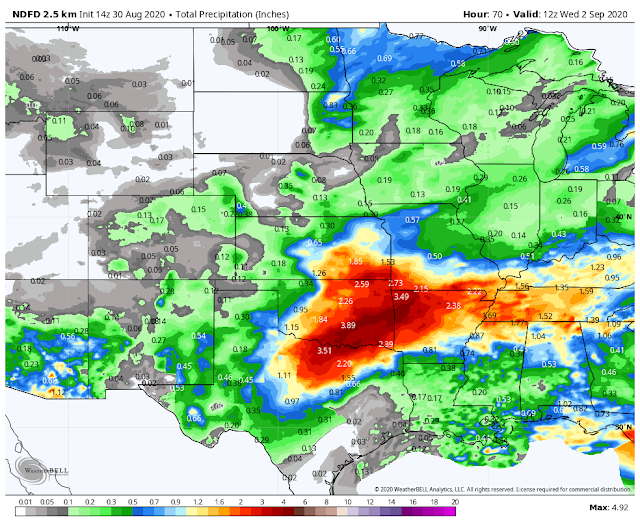 Valid Today Through 6 AM MDT Wednesday, Sept 2, 2020.
Hit and miss thunderstorms will dot the local landscape today into Wednesday. Our chances for measurable rainfall in the valley's and plains is around 20% to 30%. In the mountains, this increases to 30% to 50%.
Light Snow Forecast In The Northern Rockies. 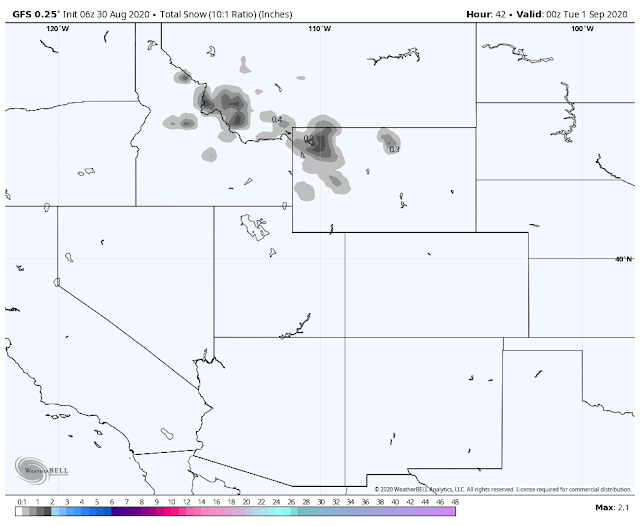 Valid At 6 PM MDT Monday, August 31, 2020.
Light snow is forecast to fall over parts of the northern Rockies. Generally only an inch or so or less. Not that unusual either, just another sign that summer's days are numbered.
The Truth Is Stranger Than Fiction!
at Sunday, August 30, 2020