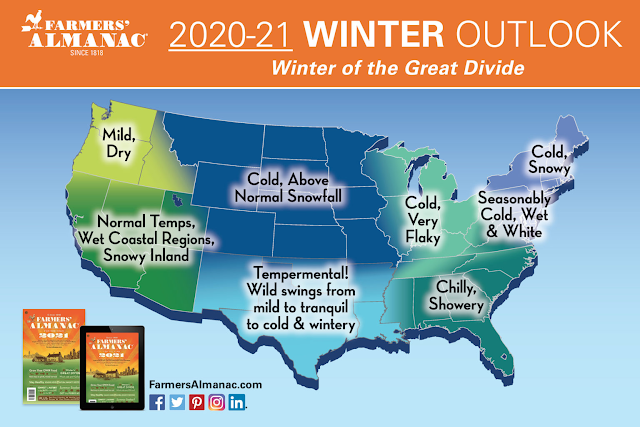 Courtesy of Famers Almanac.
First Look At Winter.
As I write this it is 105ºF in Carlsbad, New Mexico. This marks the 60th time this summer I've hit 100ºF or higher here at our home on my Davis Vantage Pro+ Wireless Home Weather Station. Even though we live in the arid high desert Southwest, enough already. This is the year it seems summer is never going to end.
So how about something different, something to distract you from the heat and drought? Farmers Almanac has released it's 2020-2021 Winter Forecast.
Long-range forecasting has never been my cup of tea but I've always admired those who attempt this almost impossible feat. Given how hot and dry our summer has been don't be surprised if Mother Nature tries to swing the pendulum the other way (cold winter) to balance herself out. Remember: "What goes up - always comes down, it's just of when."
"“Based on our time-tested weather formula, the forecast for the upcoming winter looks a lot different from last year, quite divided with some very intense cold snaps and snowfall,” states editor Peter Geiger, Philom."
"In New Mexico, Texas, Oklahoma east into Arkansas, and Louisiana, Mother Nature will mix intervals of tranquil weather with occasional shots of cold and wintry precipitation but overall may seem to be a bit “temperamental.” 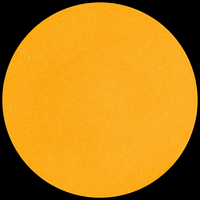 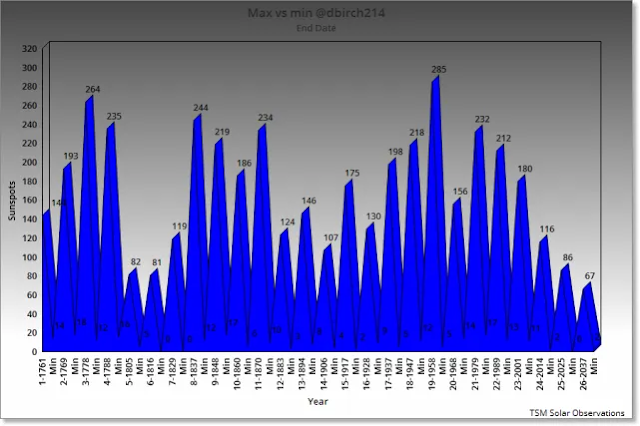 Modern Grand Solar Minimum will lead to terrestrial cooling.
In this editorial, I will demonstrate with newly discovered solar activity proxy-magnetic field that the Sun has entered into the modern Grand Solar Minimum (2020–2053) that will lead to a significant reduction of solar magnetic field and activity like during Maunder minimum leading to noticeable reduction of terrestrial temperature.
Currently, the Sun has completed solar cycle 24 – the weakest cycle of the past 100+ years – and in 2020, has started cycle 25. During the periods of low solar activity, such as the modern grand solar minimum, the Sun will often be devoid of sunspots. This is what is observed now at the start of this minimum, because in 2020 the Sun has seen, in total, 115 spotless days (or 78%), meaning 2020 is on track to surpass the space-age record of 281 spotless days (or 77%) observed in 2019. However, the cycle 25 start is still slow in firing active regions and flares, so with every extra day/week/month that passes, the null in solar activity is extended marking a start of grand solar minimum. What are the consequences for Earth of this decrease of solar activity?
Similarly to Maunder Minimum, as discussed above, the reduction of solar magnetic field will cause a decrease of solar irradiance by about 0.22% for a duration of three solar cycles (25–27) for the first modern grand minimum (2020–2053) and four solar cycles from the second modern grand minimum (2370–2415).

This, in turn, can lead to a drop of the terrestrial temperature by up to 1.0°C from the current temperature during the next three cycles (25–27) of grand minimum 1. The largest temperature drops will be approaching during the local minima between cycles 25 − 26 and cycles 26–27 when the lowest solar activity level is achieved using the estimations in Figure 2 (bottom plot) and Figure 3. Therefore, the average temperature in the Northern hemisphere can be reduced by up to 1.0°C from the current temperature, which was increased by 1.4°C since Maunder minimum. This will result in the average temperature to become lower than the current one to be only 0.4°C higher than the temperature measured in 1710. Then, after the modern grand solar minimum 1 is over, the solar activity in cycle 28 will be restored to normal in the rather short but powerful grand solar cycle lasting between 2053 and 2370, as shown in Figure 3, before it approaches the next grand solar minimum 2 in 2370.

In this editorial, I have demonstrated that the recent progress with understanding a role of the solar background magnetic field in defining solar activity and with quantifying the observed magnitudes of magnetic field at different times allowed us to enable reliable long-term prediction of solar activity on a millennium timescale. This approach revealed a presence of not only 11-year solar cycles but also of grand solar cycles with duration of 350–400 years. We demonstrated that these grand cycles are formed by the interferences of two magnetic waves with close but not equal frequencies produced by the double solar dynamo action at different depths of the solar interior. These grand cycles are always separated by grand solar minima of Maunder minimum type, which regularly occurred in the past forming well-known Maunder, Wolf, Oort, Homeric, and other grand minima.

This discovery of double dynamo action in the Sun brought us a timely warning about the upcoming grand solar minimum 1, when solar magnetic field and its magnetic activity will be reduced by 70%. This period has started in the Sun in 2020 and will last until 2053. During this modern grand minimum, one would expect to see a reduction of the average terrestrial temperature by up to 1.0°C, especially, during the periods of solar minima between the cycles 25–26 and 26–27, e.g. in the decade 2031–2043.

The reduction of a terrestrial temperature during the next 30 years can have important implications for different parts of the planet on growing vegetation, agriculture, food supplies, and heating needs in both Northern and Southern hemispheres. This global cooling during the upcoming grand solar minimum 1 (2020–2053) can offset for three decades any signs of global warming and would require inter-government efforts to tackle problems with heat and food supplies for the whole population of the Earth.