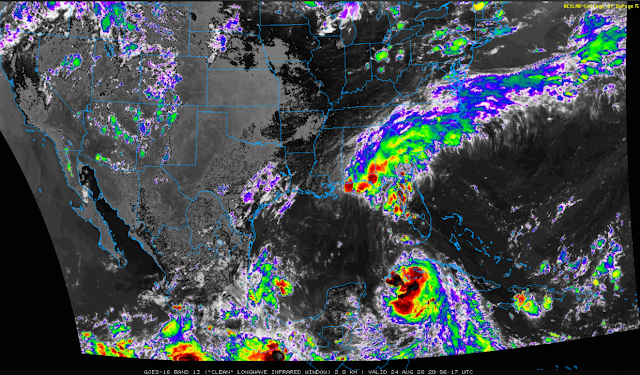 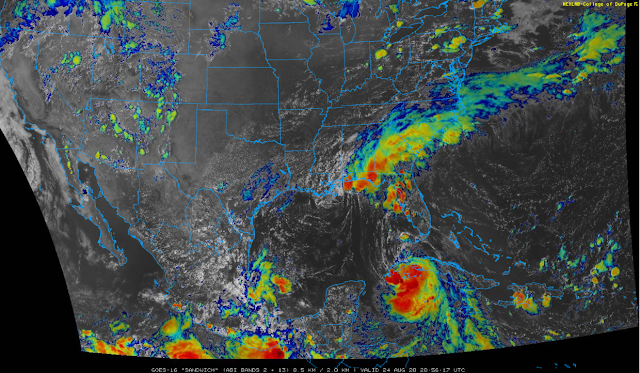 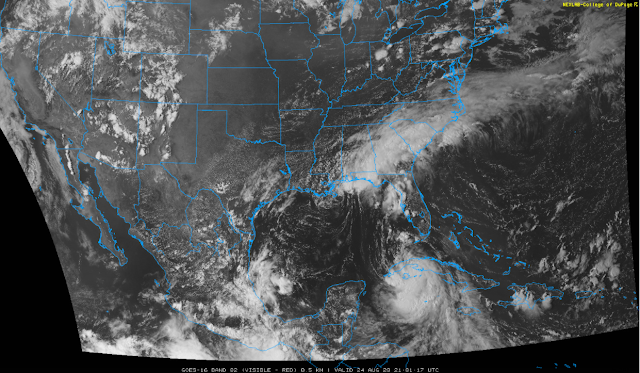 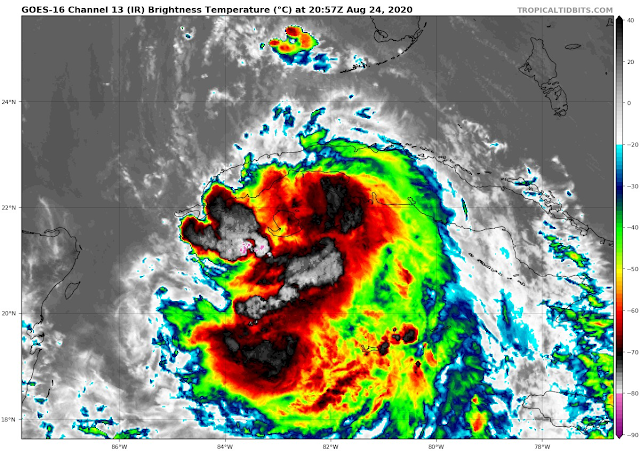 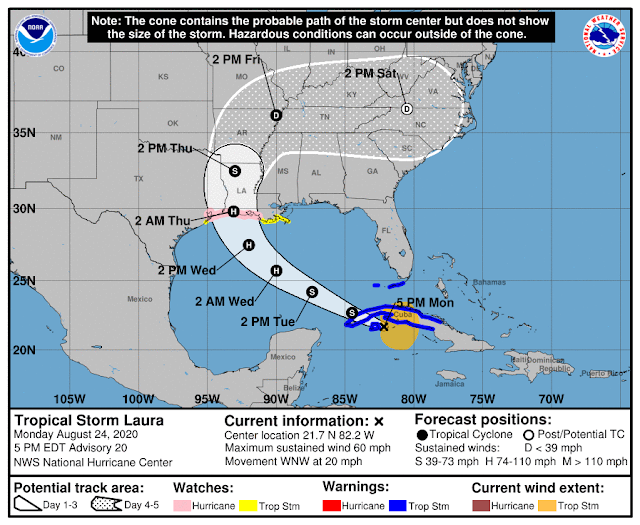 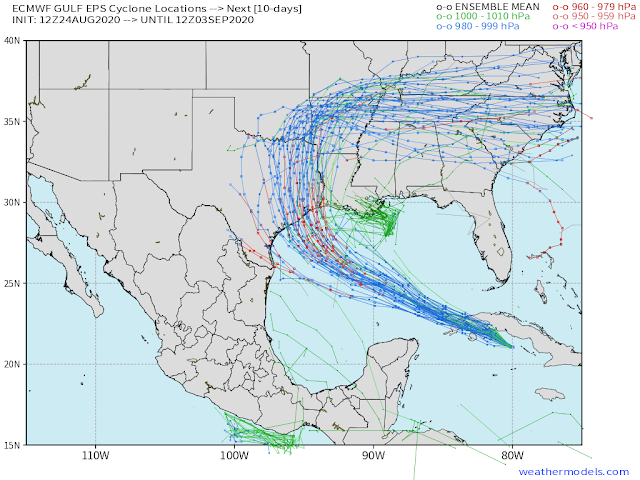 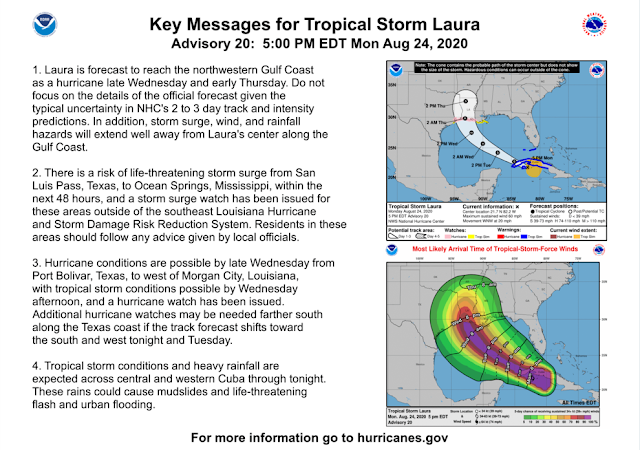 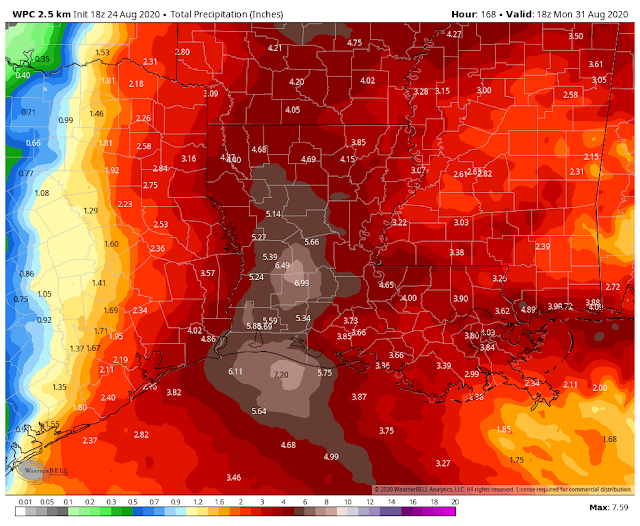 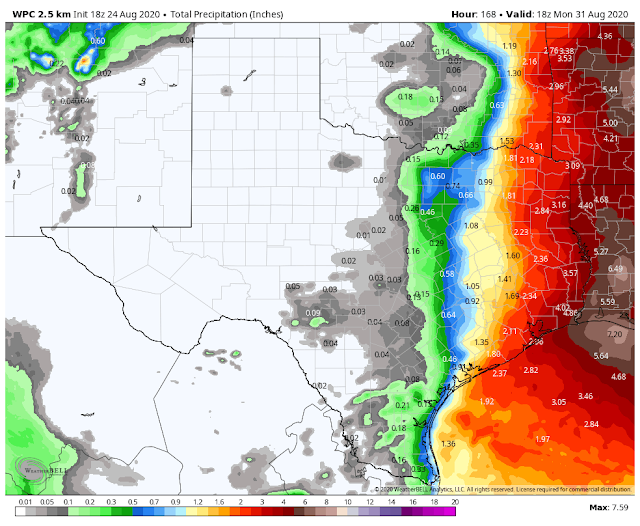 Tropical Storm Laura was located near 21.7N and 82.2W or 40 miles east of the Ise of Youth as of 3 PM MDT or 4 PM CDT this Monday afternoon. She has sustained winds of 60 mph with gusts near 70 mph. Her central pressure remains fairly steady at 1001 millibars or 29.56 inches of mercury. Laura is moving steadily to the west-northwest at 20 mph.
Tropical Storm Laura is forecast to begin steadily strengthening tonight as she pulls away from Cuba and enters the southeastern Gulf of Mexico. Rapid intensification is forecast by the Hurricane computer forecast models once Laura develops into a Hurricane. Especially tomorrow into Wednesday as she traverses the very warm waters of the Central Gulf of Mexico which are running near 85ºF to nearly 90ºF.
This morning's computer models had begun shifting Laura's track further to the west with the Hurricane forecast to make a bullseye hit on the Houston/Galveston area by early Thursday morning. This was consentient with the storm moving south of Cuba.
This afternoon's official NHC forecast has her making landfall now predicted along the southwestern Louisiana Coast around 2 AM CDT Thursday morning.
Obviously, this poses problems with trying to figure out just exactly where Laura is going to make landfall and when. The window of opportunity timewise, for now, is sometime between Wednesday night and Thursday morning. This is still up in the air as is the exact track that she takes. Landfall somewhere as far west as the Houston area and as far east as the southern Coast of Louisana is still possible! It is highly likely that we won't know where she is likely to make landfall until tomorrow or tomorrow night.
Forecasts by the computer models indicate that Tropical Storm Laura will intensify into a Hurricane later tonight. Then rapidly strengthen tomorrow into Wednesday as she moves generally northwestward across the Gulf. Laura may make landfall as a Major Hurricane...possibly as a Category 3-4!
Storm total rainfall amounts from Laura are going to be excessive. Since the storm still hasn't obtained hurricane strength at the time of this writing I believe the models are way underestimating her rainfall as depicted above. Major Hurricanes typically dump 20+ inches of rain over the areas they impact and no doubt Laura has this potential. Severe flooding will be a concern inland from where she makes landfall.
Should Laura track further west and make landfall in the Houston/Galveston, Texas area as some of the models continue to indicate then this would be a total disaster for those areas. Economically, socially, and health-wise with the ongoing effects of the COVID-19 Pandemic. The same would be true if it strikes the Beaumont, Texas, and the Lake Charles or New Orleans areas. No matter where she makes landfall this is going to be ugly!
Click On These Links Below For The Latest On Laura.
National Hurricane Center.
Latest National Hurricane Center Public Advisory.
Latest National Hurricane Center Forecast Advisory.
Latest National Hurricane Center Discussion.
National Hurricane Center Graphics.
Louisiana National Weather Service Offices.
Lake Charles.
New Orleans/Baton Rouge
National Weather Service Nation-wide.
Texas National Weather Service Offices.
Corpus Christi.
Houston/Galveston.
The Truth Is Stranger Than Fiction!
at Monday, August 24, 2020