Monsoonal Flow Back Over E AZ & W NM.
Click On The Maps To Enlarge Them. 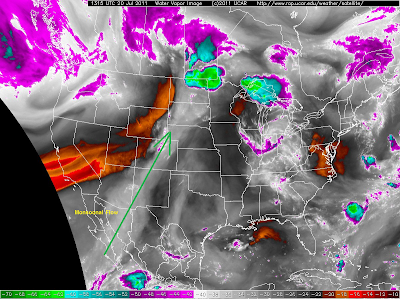 Water Vapor Satellite Image At 7:15 AM This Morning.
Its pretty easy to pick out where the monsoonal flow is this morning. Sub-tropical moisture is streaming northward out of Mexico into most of Arizona and western New Mexico.
Forecast models indicate that this moisture will gradually spread a little further eastward, and into central New Mexico by the end of the week into the weekend. T-storm activity will increase in coverage across roughly the western 2/3rd's of the state during this time frame. 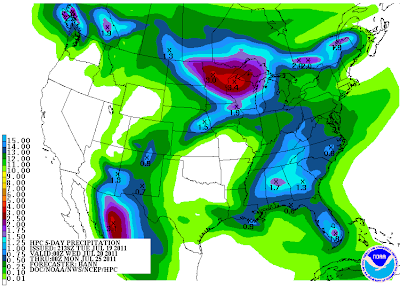 NWS HPC 5-Day Precipitation Total Forecast Map.
Valid From 6 PM Tue - 6 PM Sun.
Computer model forecasts indicate that the most widespread, and heaviest rainfall totals, should fall to the west of SE NM through the weekend. This has been one of those years when the summer monsoon is having a hard time getting into SE NM and W TX.
More hot weather is forecast for us through the weekend, with daily high temperatures ranging from 100 - 105. The Carlsbad Airport topped out at 102 yesterday, and this makes the 41st day this year that we have reached or exceed the century mark.
Our chances for hit and miss t-storms will increase slightly over the SE NM plains today into the weekend. The weekend should see the most widespread activity. Although t-storms will return to the Pecos Valley and surrounding areas, widespread drought breaking rains are not expected to occur.
As has been the case so far this summer, the Guadalupe, Sacramento, and Capitan Mountains will have the best shot at seeing locally heavy rainfall this weekend. Some of these storms may produce localized flashing flooding, especially over and near the burn scar areas.


Here is a weather story for the record books. Yesterday afternoon, the Moorhead, Minnesota Airport (KJKJ) recorded a high temperature of 95F. Seems cool to our endless string of 100+ days right?


It is until you factor in their dew point temperature at the time, which was an astounding 88F. This produced an incredible, if not nearly unbelievable heat index value of 134F.