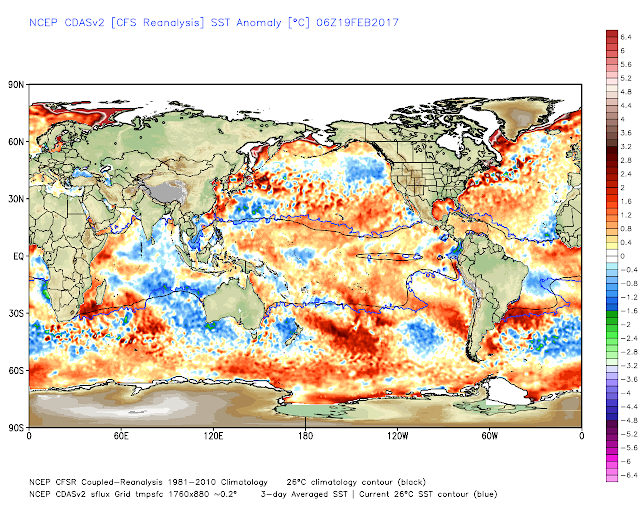 La Niña Is Gone - El Niño To Return This Spring?

2017 Starting Off Warmer & Wetter Than Normal. 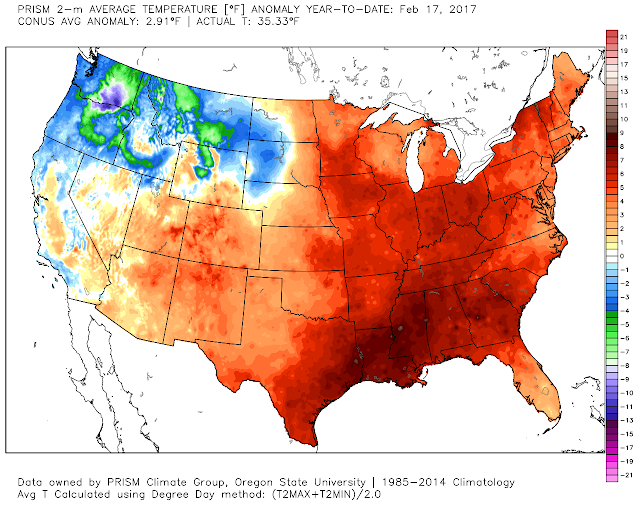 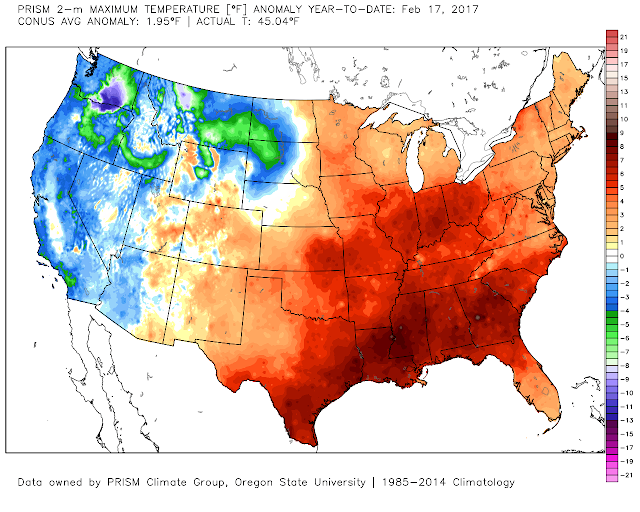 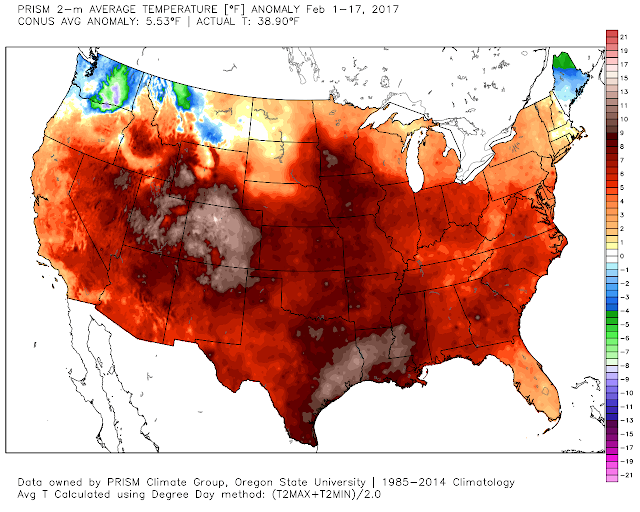 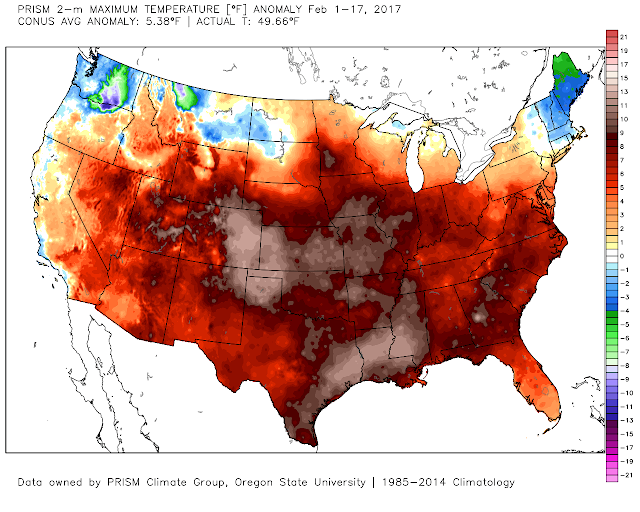 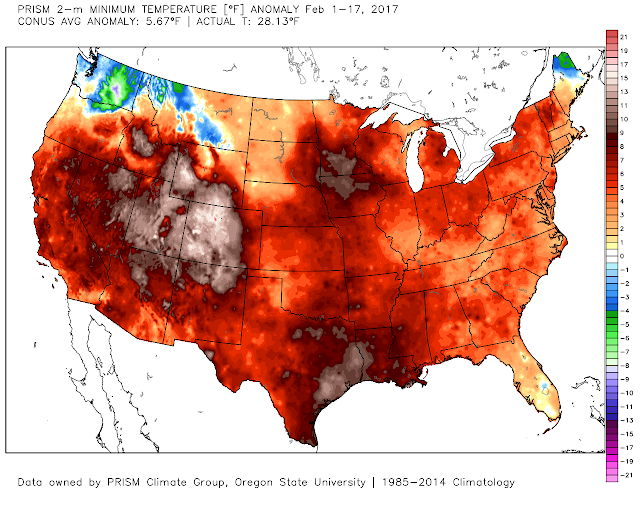 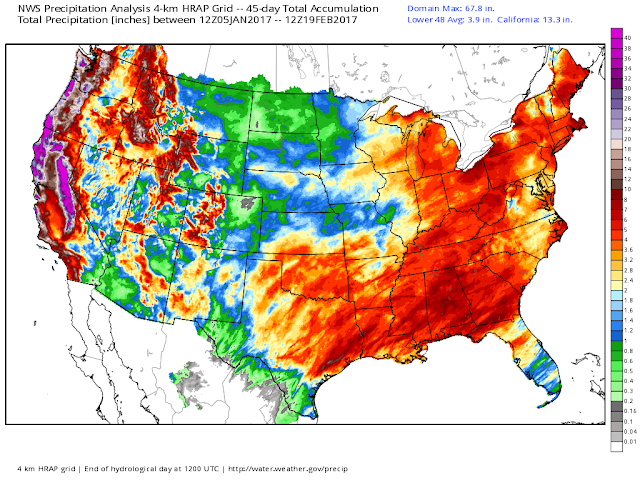 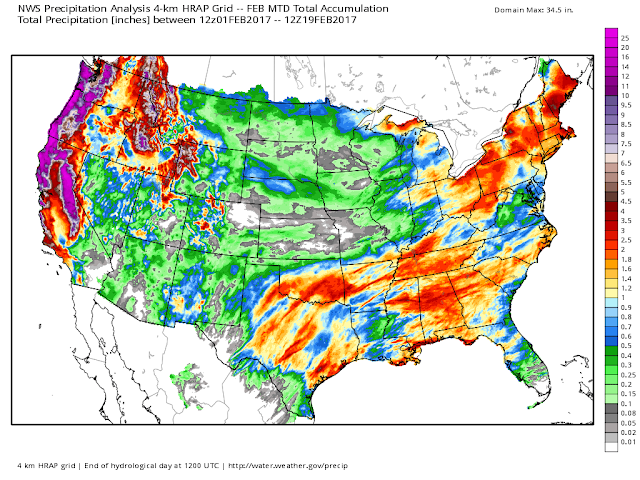 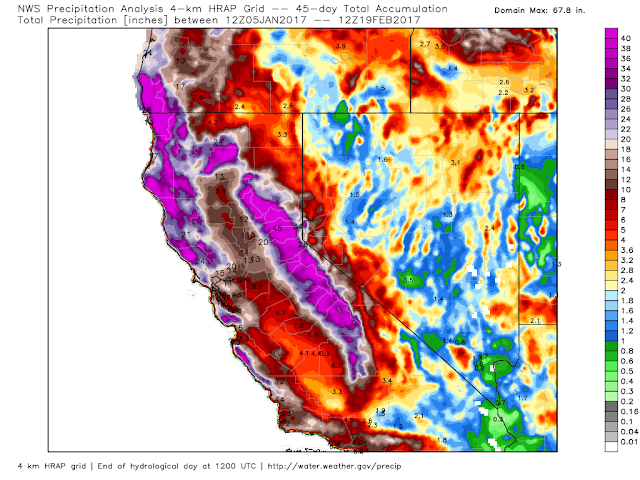 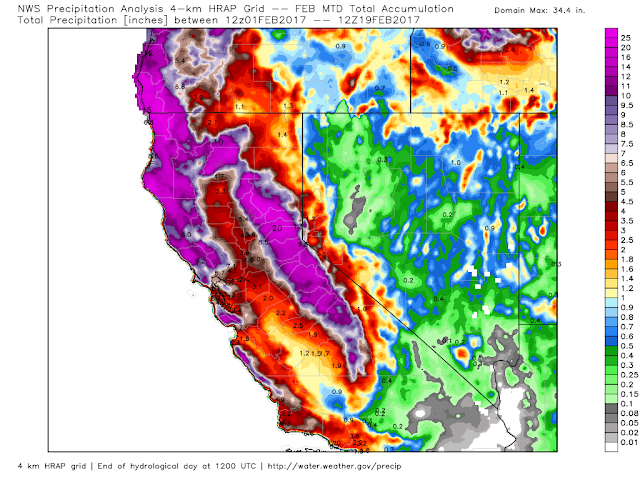 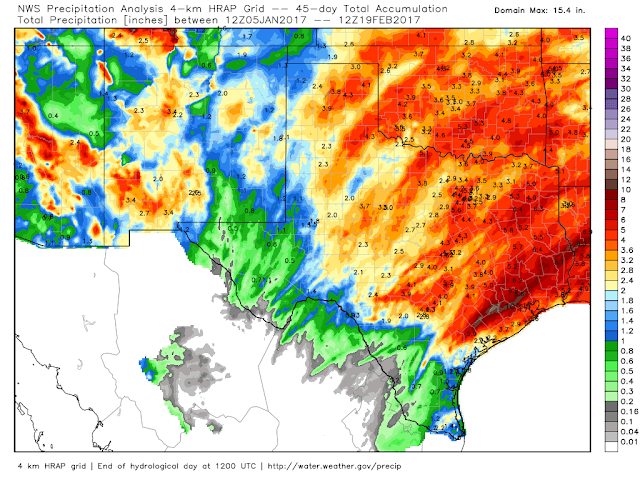 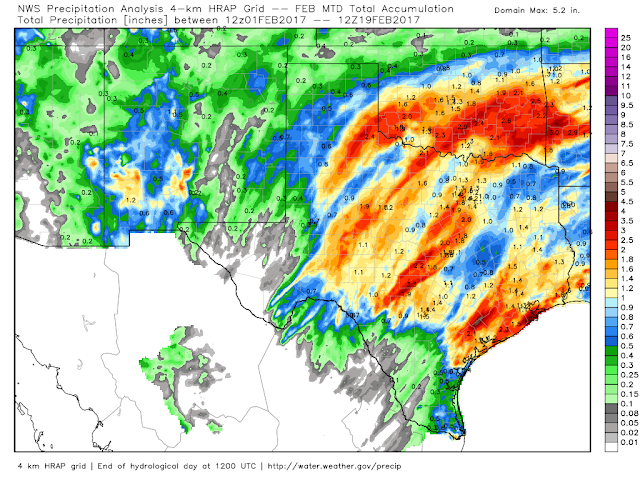 So far this year is starting out warmer to much warmer than normal across the nation. This can be in part be blamed for the above average sea surface temperatures in the Pacific Ocean, and the Gulf of Mexico. And to a somewhat lesser degree the Eastern Atlantic Ocean. La Niña conditions over the Pacific Ocean have dissipated leaving the Ocean in a near neutral condition. There are increasing signs that El Niño conditions will return later this spring or early this summer.

The MJO has had a huge short term impact on this winter's temperatures and precipitation. Also playing a role in this winters pattern was the early and deep snowpack and cold across Northern Asia, which helped produce a strong jet stream that cooled the waters of the Central Pacific Ocean.

So instead of Climate Change once again its the planet's natural cycling of the its Oceans (in this case the Warm PDO Phase) that has been a driving force in how this winter has turned out so far. These factors have helped to form "The Atmospheric River Events" that have produced record to near record rainfall totals across California and parts of the Western U.S. this winter. Click on this link to view some of the more recent significant AR Events.

Sadly the worst of this winter's onslaught may yet to occur in California. Long range computer forecast models and climatology suggest that yet more storms will line up and take aim at California and the Western U.S. as we transition out of winter and into spring. This will be bad news for them as temperatures warm and the record to near record snowpack in the mountains begin to melt and fill already swollen lakes, rivers, and creeks. 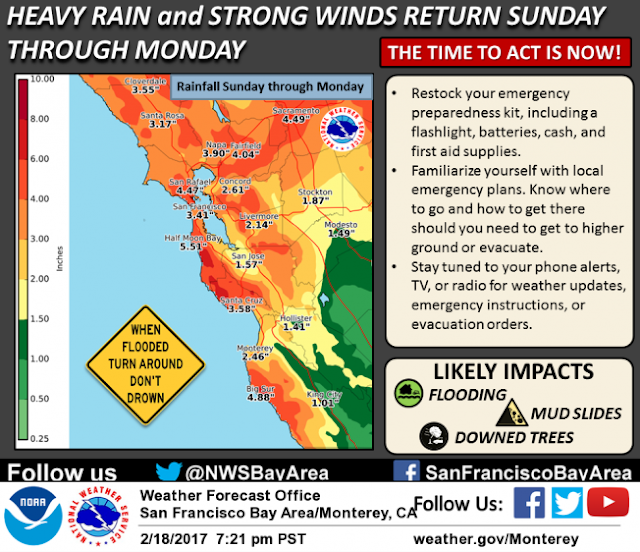 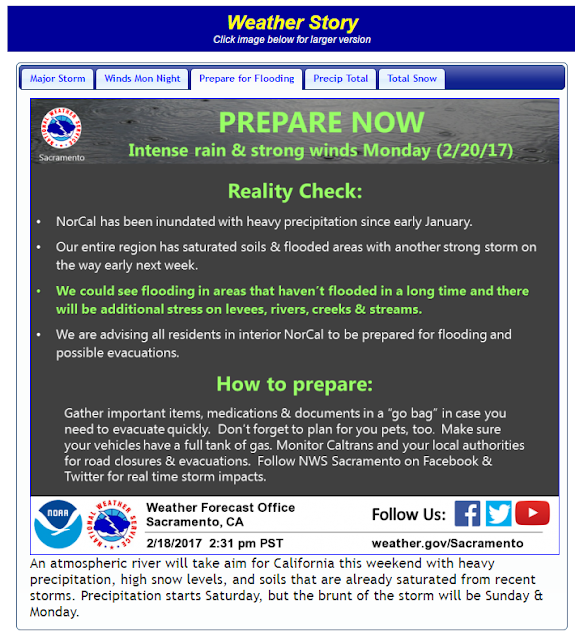 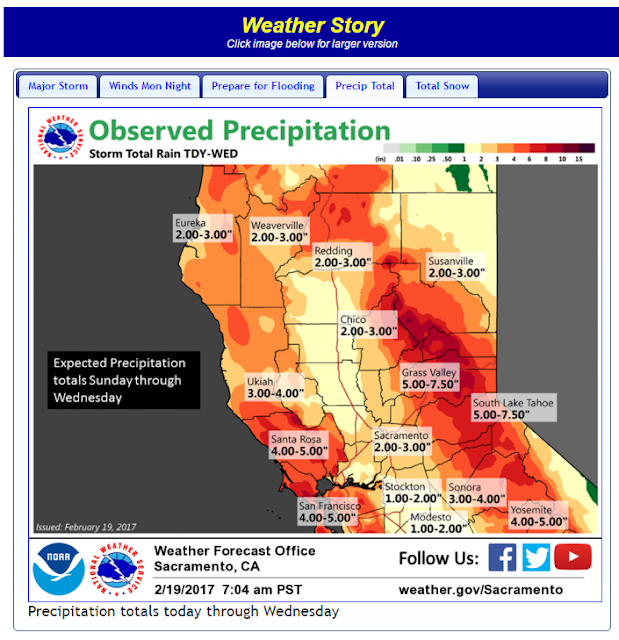 Why So Much Rain & Snow This Winter In California? 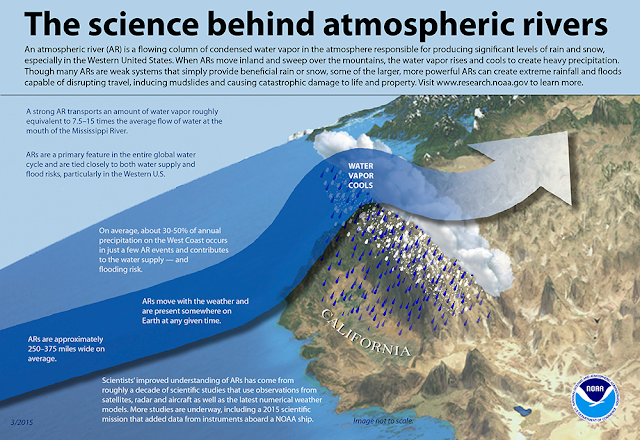 Atmospheric Rivers (ARs) are relatively narrow regions in the atmosphere that are responsible for most of the horizontal transport of water vapor outside of the tropics. While ARs come in many shapes and sizes, those that contain the largest amounts of water vapor, the strongest winds, and stall over watersheds vulnerable to flooding, can create extreme rainfall and floods. These events can disrupt travel, induce mud slides, and cause catastrophic damage to life and property. However, not all ARs cause damage – most are weak, and simply provide beneficial rain or snow that is crucial to water supply. 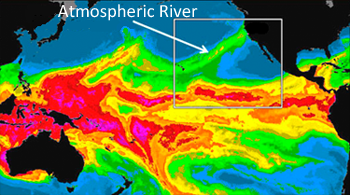 ARs are the water-vapor rich part of the broader warm conveyor belt (e.g., Browning, 1990; Carlson, 1991), that is found in extratropical cyclones ("storms"). They result from the action of winds associated with the storm drawing together moisture into a narrow region just ahead of the cold front where low-level winds can sometimes exceed hurricane strength. The term atmospheric river was coined in a seminal scientific paper published in 1998 by researchers Zhu and Newell at MIT (Zhu and Newell 1998). Because they found that most of the water vapor was transported in relatively narrow regions of the atmosphere (90% of the transport occurred typically in 4-5 long, narrow regions roughly 400 km wide), the term atmospheric river was used. A number of formal scientific papers have since been published building on this concept (see the publication list), and forecasters and climate researchers are beginning to apply the ideas and methods to their fields.
The satellite images at left show strong ARs as seen by satellite. The advent of these specialized satellite observations have revealed ARs over the oceans and have revolutionized understanding of the global importance of ARs (more traditional satellite data available in the past could not clearly detect AR conditions). The interpretation of these satellite images, which represent only water vapor, not winds, was confirmed using NOAA research aircraft data over the Eastern Pacific Ocean and wind profilers along the coast (Ralph et al. 2004). The event shown in the bottom-left image was documented by Ralph et al. (2006), which concluded this AR produced roughly 10 inches of rain in 2 days and caused a flood on the Russian River of northern California. It was also shown that all floods on the Russian River in the 7-year period of study were associated with AR conditions. As of late 2010 there have been a number of papers published on major west coast storms where the presence and importance of AR conditions have been documented. These are provided in an informal list of the "Top Ten ARs" of the last several years on the U.S. West Coast. It is now recognized that the well-known "Pineapple express," storms (a term that has been used on the U.S. West Coast for many years) correspond to a subset of ARs, i.e., those that have a connection to the tropics near Hawaii. In some of the most extreme ARs, the water vapor transport is enhanced by the fact that they entrain (draw in) water vapor directly from the tropics (e.g., Bao et al 2006, Ralph et al. 2011).
The Truth Is Stranger Than Fiction!
Email Post