Will Our Drought Last Another 10 Yrs? 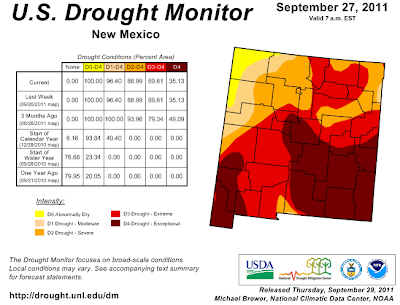 Worst Drought In Our History Rages On.
Nearly everyone I talk to asks me the same question...when is this drought going to end? I've been telling everyone that my fear is that it could last at least a couple more years, if not longer, maybe even 10 years before it breaks. Most of these people look at me like I have two horns growing out of the side of my head when they hear this. Its a shocking statement no doubt. But read this article below and then tell me I'm wrong. Believe me I hope I am!
Texas Drought Could Last Another 9 Years!
(I think this apply's to New Mexico as well.)

Click On This Link For More On The Story.
"Could The Texas (New Mexico) Drought Last Another 10-15 Years?
Quote- " By Dr. Jeff Masters
Published: 3:00 PM GMT on September 30, 2011
The devastating Texas drought that has already cost over $5 billion could continue for nine more years, predicted Texas State Climatologist John Nielson-Gammon in an interview with Reuters yesterday. "It is possible that we could be looking at another of these multi-year droughts like we saw in the 1950s, and like the tree rings have shown that the state has experienced over the last several centuries," Nielson-Gammon said. Drought statistics released yesterday by the U.S. Drought Monitor showed that over 96% of Texas is experiencing the two worst categories of drought, extreme and exceptional.
Other large-scale atmospheric/oceanic patterns called the Pacfic Decadal Oscillation (PDO) and Atlantic Multidecadal Oscillation (AMO) have also favored dry conditions for Texas this year. When the AMO brings warm ocean temperatures to the North Atlantic, as it has since 1995, Texas is typically dry. Texas also tends to be dry when the PDO brings cool ocean temperatures to the coastal North Pacific next to North America.
The past 12 months have been the driest one-year period on record in Texas. The main blame for this year's drought can be put on La Niña, the cooling of equatorial Pacific waters that deflects the jet stream and takes rain-bearing low pressure system away from Texas.
This has been the case since 2007 (except for late 2009 and early 2010.) In a post earlier this month in his excellent blog, Climate Abyss, Nielson-Gammon has this to say about the influence of global warming on the 2011 drought:"
Note- I don't agree with his statements about Global Warming, but otherwise I think he is right on track.
The Truth Is Stranger Than Fiction!
at Friday, September 30, 2011