This forecast model run from NOAA's space weather experts suggests that Tuesday evening's coronal mass ejection -- a blast from the sun's outer atmosphere -- could reach Earth by early Thursday morning. The sun is yellow in center; Earth is smaller green dot to the right. Geomagnetic storms from these kinds of space weather events can affect the power grid, navigation systems and other technologies. NOAA provides space weather forecasting for the nation, and forecasters at NOAA's Space Weather Prediction Center are issuing updates regularly.
The impressive flare from Tuesday evening, and a corresponding radiation storm are already triggering high-frequency radio outages at Earth's poles, which could last a day or more, and possible temporary outages on parts of the day-lit Earth. More: http://www.swpc.noaa.gov/ 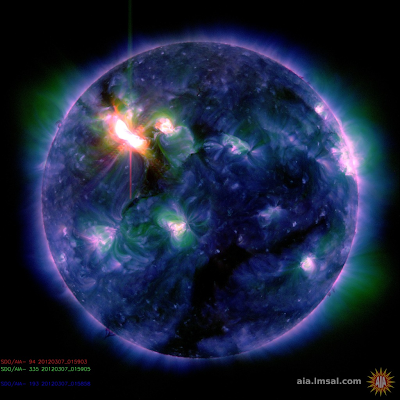 Big sunspot AR1429 has unleashed another major flare. This one is the strongest yet, an X5-class eruption on March 7th at 00:28 UT. NASA's Solar Dynamics Observatory recorded the extreme UV flash:

Geomagnetic Storm Update...
"The anticipated geomagnetic storm is here, but we haven’t seen much as of yet – why is that the case? For the strongest of storming, we generally need the magnetic field in that cloud, the coronal mass ejection (CME), to be opposite that of Earth’s own magnetic field. So thinking of Earth as a bar magnet, and using the same bar magnet mental picture for that cloud, we get the strongest response when we have the opposite ends or polarities aligned or going in the same direction. When those two bar magnets are facing the same direction, the storming and coupling is not as strong.

We get to measure the magnetic field in this cloud with the NASA Advanced Composition Explorer (ACE), a spacecraft sitting between Sun and Earth, about 1 million upstream of Earth (with the Sun being 93 million miles away). The image below is one measure of the magnetic field in this cloud. The red line could be thought of as that “bar magnet” term, with the white being the strength of the field in total. When that red line is positive, the fields are in the same direction, resulting in smaller storming. When the red line is negative, those bar magnets are in opposite directions, resulting in stronger storming. A lot of details to say, there is a strong field in the cloud that has passed, but it has been opposite of what would be needed to cause strong storming. Stay tuned, this CME is not done and we may yet get the magnetic field needed to cause higher levels of geomagnetic storming."

For more information, please visit us at http://www.spaceweather.gov/

"The biggest solar storm in five years is battering our planet right now, and may cause disruptions to satellites, power grids and communications networks over the next 24 hours, space weather experts say.
Two strong solar flares erupted from the surface of the sun late Tuesday (March 6), blasting a wave of plasma and charged particles toward Earth. After speeding through space at 4 million mph, this eruption of material — called a coronal mass ejection (CME) — should be hitting Earth now.
The storm is expected to create strong disruptions due to an odd combination of intense magnetic, radio and radiation emissions, making it the strongest overall solar storm since December 2006, even though the flare that triggered it was not the largest, space weather officials said.
The CME reached Earth this morning at about 5:45 a.m. EST (1045 GMT), according to officials at the Space Weather Prediction Center, which is jointly managed by the National Oceanic and Atmospheric Administration (NOAA) and the National Weather Service. While the CME did not hit Earth head-on, the material delivered a glancing blow to the planet, and energetic particles will continue to interact with Earth's magnetic field over the course of the day.
The CME will likely trigger geomagnetic and solar radiation storms today, which could interfere with satellites in space and power grids on the ground, said Joseph Kunches, a space weather scientist at NOAA. Aircraft that fly over the Earth's polar caps may potentially experience communications issues as well, and some commercial airliners have already taken precautionary steps, Kunches said.
"There is the potential for induced currents in power grids," Kunches told reporters Wednesday. "Power grid operators have all been alerted. It could start to cause some unwanted induced currents."
The effects of this solar storm will likely last for 24 hours, and may possibly linger into Friday (March 9), Kunches said.
"Such a CME could result in a severe geomagnetic storm, causing aurora at low latitudes, with possible disruption to high frequency radio communication, global positioning systems (GPS), and power grids," NASA scientists said in a statement.
Experts also predict that the magnetic storm will likely enhance normal aurora displays (also known as the northern and southern lights). As the effects of the CME bombard Earth, these stunning light shows will be especially visible for people where it is currently night, though the full moon of March, which also occurs Thursday, may interfere with the display.
"Skywatchers at all latitudes should be alert for auroras," astronomer Tony Phillips wrote on his website Spaceweather.com, which regularly monitors space weather events.
If you snap an amazing photo of the northern lights sparked by these sun storms and would like to share it for a possible story or image gallery, please contact SPACE.com managing editor Tariq Malik at tmalik@space.com."
The Sun's Wrath: Worst Solar Storms In History.
The Sun Now.
The Truth Is Stranger Than Fiction!