Another Day Of More Wind & Dust! 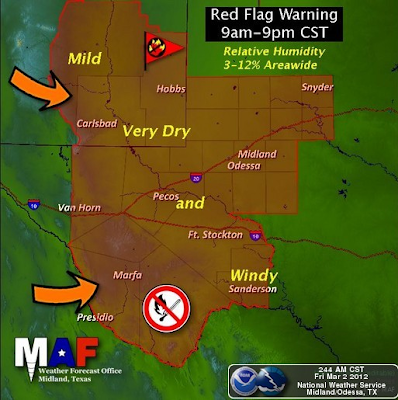 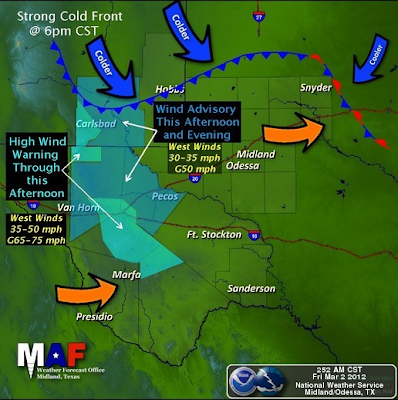 Maps Are Courtesy Of The Midland NWS Office.
Yesterday.

March roared in like a lion yesterday with more wind and blowing dust. The Artesia Airport reported a peak wind gust of 55 mph, the Carlsbad Airport 53 mph, Guadalupe Pass 53 mph, and the Roswell Airport 46 mph.
Areas of blowing dust once again plagued the southeastern plains, although the dust was not as widespread and as thick as Tuesday's event. High temperatures yesterday ranged from 80 at the Roswell Airport, to 78 at the Carlsbad Airport, 75 at the Hobbs Airport, and 73 at the Artesia Airport.
Given the fact that most of southeastern New Mexico has only received on average of 4" - 5" of rain since October 2010, some areas even less than this, we can expect to see more blowing dust events until the rains return, and the extreme drought that is plaguing the area is broken.
We will get a break from the wind and dust this weekend. Cooler temperatures are forecast for the southeastern plains tomorrow with most of us seeing our afternoon highs in the upper 50's to the low 60's. Sunday will see the start to a warming trend with the upper 60's to the low 70's.By Monday we will see the mid-upper 70's.
A High Wind Warning remains in effect for the Guadalupe Mountains until 5 PM MST this afternoon for southwesterly winds this morning of 35-45 mph with higher gusts, which will shift around to the west later today at around 35-50G65 mph.
A High Wind Warning remains in effect for Lincoln and southwestern Chaves Counties through 6 PM MST this evening for westerly winds of around 35-45G60 mph.
A Wind Advisory will be in effect for Eddy and Culberson Counties from 11 AM MST this morning through 11 PM MST this evening for westerly winds of around 30-40G55 mph, shifting to the northwest at around 25-35G50 mph this evening as a dry Pacific cold front moves through the area.
A Wind Advisory will be in effect for the Chaves County plains from 8 AM MST through 6 PM MST today for westerly winds of around 25-35G50 mph, shifting to the northwest later today.
A Wind Advisory will be in effect from 8 AM MST - 6 PM MST today for Otero County including the southern Sacramento Mountains for west-northwesterly winds at around 25-35G40-45 mph.
Once again areas of blowing dust will drop the visibility down to less than 1 mile in some locations. This will be especially true over and near those normally dust prone areas such as freshly plowed or open farmlands, fields, lots, and construction sites. Sudden drops in the visibility down to zero can be expected in these locations with little to no advanced warning.
A Red Flag Warning has been issued for all of the area from 8 AM MST through 8 PM MST this evening. Another day of Critically Dangerous Fire Weather Conditions due to the expected high winds, the continuing extreme drought conditions, and the very low relative humidity values forecast for today. You know the drill so please refrain from any type of outdoor activity that involves the use of sparks or flame. Any wildland fire that may accidentally get started will have the potential to rapidly spread and grow in today's 50+ mph wind gusts.
Two Week Outlook.
Long-range forecasts keep us warm and dry over the next 10-days to two weeks with not much hope of significant precipitation across the southeastern New Mexico plains. Our next potential wind and dust event may occur by the middle of next week.
The Truth Is Stranger Than Fiction!
My Web Page Is Best Viewed With Google Chrome.
on March 02, 2012
Posted by Wendell Malone