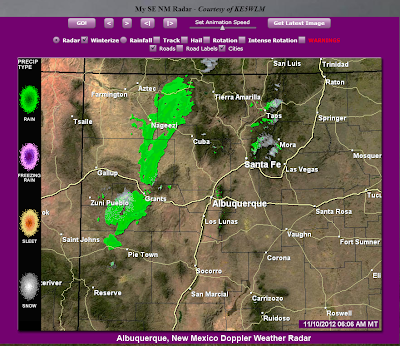 My SE NM Radar Snapshot At 6:06 AM MST This Morning.

An area of light rain showers mixed in with light snow showers covered parts of northwestern New Mexico, as well as over the Sangre de Cristo Mountains north of Santa Fe early this morning.

Notice that I have the "Winterize Button" checked at the top of the radar snapshot above. Be sure to check this button, to put the radar into the "Winterize" mode, in order to be able to tell the difference between the rain (green echoes), freezing rain (purple echoes), sleet (orange echoes), and snow (white or gray echoes), when clicking on the "My SE NM Radar" link at the top of my web page.

I captured this snapshot using the GRLevel3 2.00 Albuquerque NWS Doppler Radar (Dual Polarization Mode) at 6:06 AM MST this morning. I have the radar in the "Hydrometer Classification Algorithm Mode" or HCA @ 0.5 degrees in elevation.

It is showing an area of Dry Snow or "DS" over northwestern New Mexico, and over the Sangre de Cristo Mountains of northern New Mexico north of Santa Fe. Gallup has been reporting snow for the past couple of hours.

As we head towards winter I will post more of these radar snapshots onto my daily blogs whenever there is winter precipitation occurring  Just a couple of fun ways to look at radar in order to get a better idea of what is going on across the area. 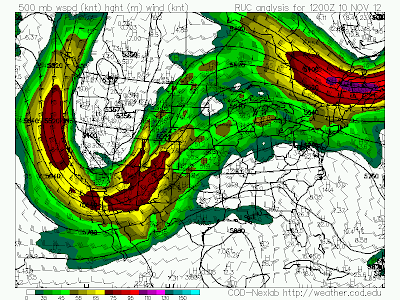 A strong, and cold upper-level trough of low pressure is digging southward into southern California, and western Arizona as of sunrise this morning. Temperatures at the 500 millibar level, or at the 18,000' mean sea level, with this storm, are forecast to be around -30C/-22F as it crosses the state today into tomorrow. 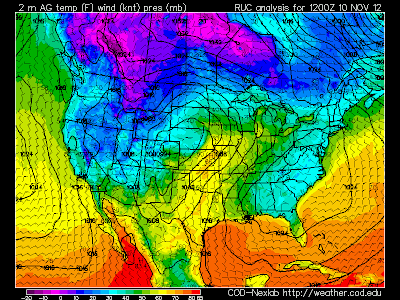 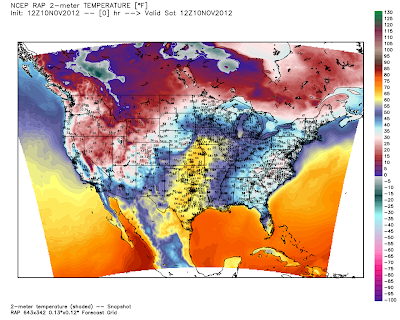 Take a look at the maps above, notice that single digit temps are being reported in northwestern Montana, while temps across northwestern Canada are as low as -15F. So without a doubt this inbound storm headed into New Mexico has lots of energy to work with, what is limited though is the moisture. 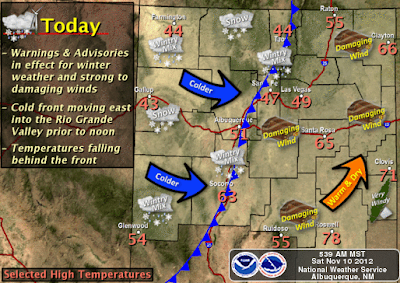 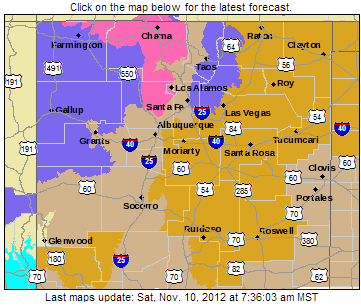 As the strong early winter-like storm approaches the state today, strong southwesterly winds are forecast to kick up across the area later this morning. High Wind Warnings are in effect today for Chaves, Lincoln, Otero, western Eddy, and northern Culbderson Counties.

As the surface pressure gradient continues to tighten ahead of the approaching upper-level storm, the Pacific cold front, and the stronger winds aloft mix down to the surface, southwesterly winds will begin to howl later this morning.

Southwesterly winds will increase to sustained speeds of 35-55 mph with gusts near 75 mph over the Guadalupe Mountains.

Southwesterly winds will increase to sustained speeds of 35-45 mph with gusts near 55-65 mph across Chaves and Lincoln Counties.

Southwesterly winds will increase to sustained speeds of 35-45 mph with gusts over 60 mph in Otero County, including the Cloudcroft, Mayhill, Weed, Sacramento, Timberon, Pinion, Mountain Park, and High Roll areas.

A Wind Advisory remains in effect for Eddy and Lea Counties today. Southwesterly winds will increase to sustained speeds of 25-35 mph with gusts near 50 mph. I think that a few of us may see even higher gusts near the foothills, and mountains.

Areas of blowing dust are also forecast today. Of special concern will be the normally more dust prone locations that include the following- open or exposed fields, farmlands, lots, and construction sites.

Please be prepared for sudden drops in the visibility down to near zero without any advanced warning in and close to the above mentioned areas.

Blinding clouds of dust will make it nearly impossible to see more than a few feet in front of your vehicle, in and close to the above mentioned areas! Please slow down and use extreme caution if you must travel our local highways and roads today.

Much lighter snowfall amounts may fall across the higher elevations of the Sacramento and Capitan Mountains of south-central New Mexico today into tonight. Sunspot, Cloudcroft, and Ski Apache, have the best chances of seeing any snowfall. Current National Weather Service forecasts indicate that what ever falls will be on the light side.

Colder Sunday Into Early Next Week. 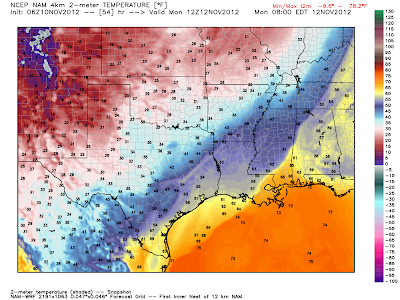 A colder airmass will enter the area tonight as the Pacific cold front moves eastward into west Texas. After seeing our afternoon high temperatures climb up into the upper 70's to low 80's this afternoon, our highs will only be in the upper 50's to low 60's on Sunday.

With clear skies, light winds, and a dry airmass in place, our low temperatures Monday morning are going to be the coldest of the season thus far. I think that our lows will dip down into the teens and low 20's across most of southeastern New Mexico as depicted by the NAM model forecast map above.