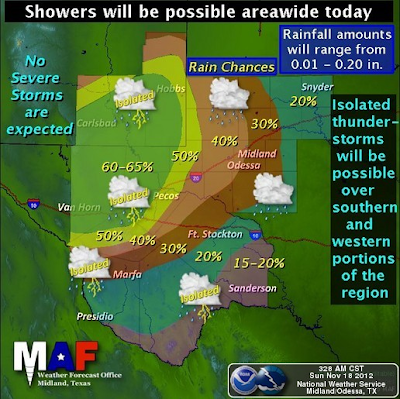 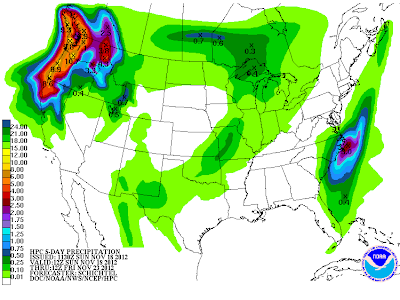 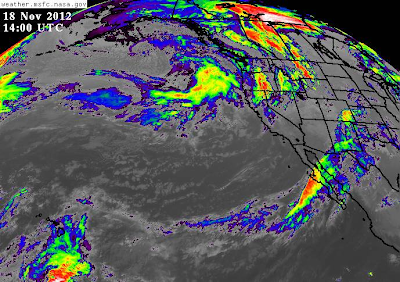 IR Satellite Image At 7 AM MST This Morning.

What Has Already Fallen Overnight. 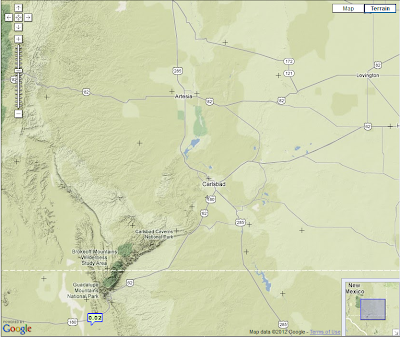 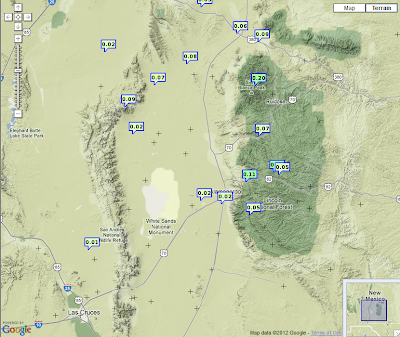 NWS Mesonet 24-Hour Rainfall Totals As Of 7 AM MST.

Otero County CoCoRaHS 24-Hour Rainfall Totals As Of 7 AM.

A thick deck of mid-level clouds covers the area this morning courtesy of a weak upper-level trough of low pressure approaching from the west. Light rain showers broke out over our western counties overnight. Most totals (as of 7 AM MST this morning) have been under a tenth of an inch. Ski Apache has received the heaviest amount so far with .20" of liquid equivelant, while light snow continues to fall on the resort.

Rain should fall upon the plain today. There may even be an embeded isolated thunderstorm or two. Our chances for measurable rainfall range from 20% in the Roswell area, to 50% in the Artesia and Hobbs area, and 60% in the Carlsbad area. Overall rainfall amounts should be light with a few spots perhaps picking up a quarter of an inch or so.

Our high temps today are forecast to range from the mid 60's to the mid 70's. Monday will see highs in the mid 70's, and Tuesday should see readings in the low 70's. Another weak upper-level trough of low pressure will swing eastward over the area on Wednesday. So we might see some more light rain showers develop with this system. Highs on Wednesday will be near 70. Thanksgiving still looks like it will be sunny and warm with highs in the low 70's.

Looking Ahead - Much Colder Weather Lurking. 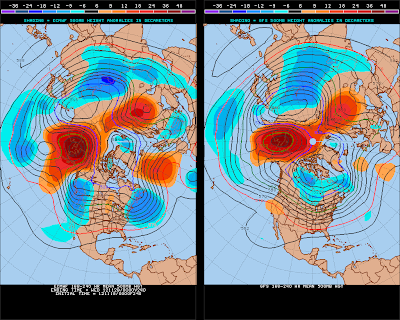 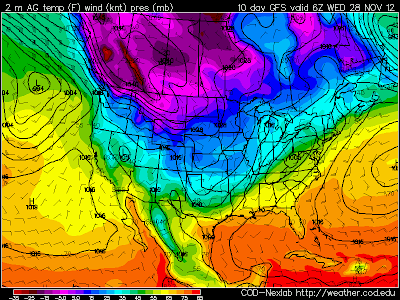 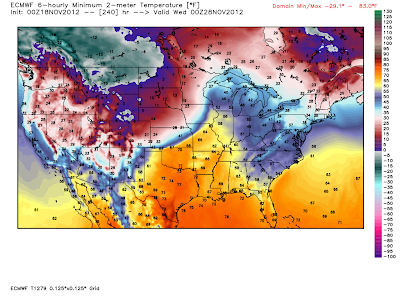 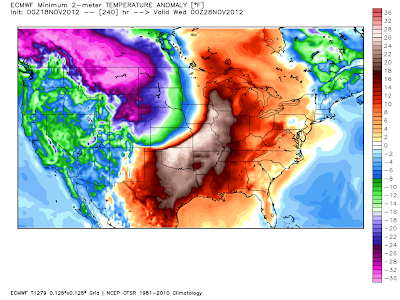 Brutal cold appears to be shaping up to invade the U.S. in about a week to ten days according to last nights computer model forecast runs. Blocking over Alaska and Iceland in the long-range forecasts (500 millibar level), will force some very cold arctic air southward into the U.S. according to the European (ECMWF), and U.S. GFS forecast models.

Last nights 00Z/5 PM MST run of the ECMWF is forecasting temps some 20 to 35-degrees below normal over much of Wyoming, northward into Montana and Canada by around the 27th. Take a a look at some of these temperatures, they are forecast to range from 0F to -35F.

Remember these are just model forecasts, and we will likely see the models vary from day to day on this forecast over the next week. However, there appears to be a strong chance that the current run of above normal temperatures east of the Rockies may be coming to an end soon.