Another Shot At Rain. 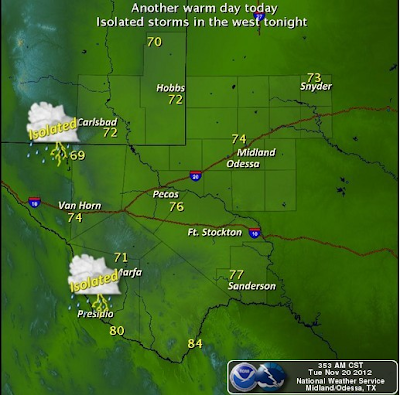 Another balmy day is expected across southeastern New Mexico and west Texas today. Locally we will once again see our afternoon highs reach the low 70's. Clouds will be on the increase late as another upper-level disturbance approaches from the southwest. A few isolated rain showers and thunderstorms are possible tonight.

A better chance of seeing rain and a few thunderstorms will occur on Wednesday. Our chances for rain will increase to 30% to 40%. Highs on Wednesday will generally be in the upper 60's to the low 70's.

Skies will clear in time for a beautiful Thanksgiving with afternoon highs in the mid 70's. A weak cold front will move across the area later in the day bringing cooler temps on Friday with our afternoon highs forecast to be in the upper 50's to low 60's. Saturday will warm up with highs in the mid to upper 60's, and Sunday will see a return to the upper 60's to the mid 70's. 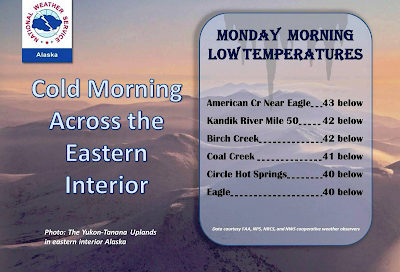 Bitterly cold arctic air has been pooling over Alaska and far northwestern Canada. This brutal airmass will head south and east late this week into next week. Its rather unusual to see temps diving down to -40F in Alaska, in the middle of November. Not so much for late December through February. This is a good indicator of what is headed south into the U.S. next week.

Both the U.S. GFS model and the European (ECMWF) model are all over the place now with their forecasts of next weeks invasion from the North Pole. So its useless at this point to try and pinpoint any details down concerning the impacts on our local weather.

But make no mistake, its going to get much colder next week, so get ready and enjoy these 70-degree temps while they last. There is the potential for much of the state to see some of the white stuff fall from the skies next week also, especially over the mountains.

My Web Page Is Best Viewed With Google Chrome.
on November 20, 2012
Posted by Wendell Malone